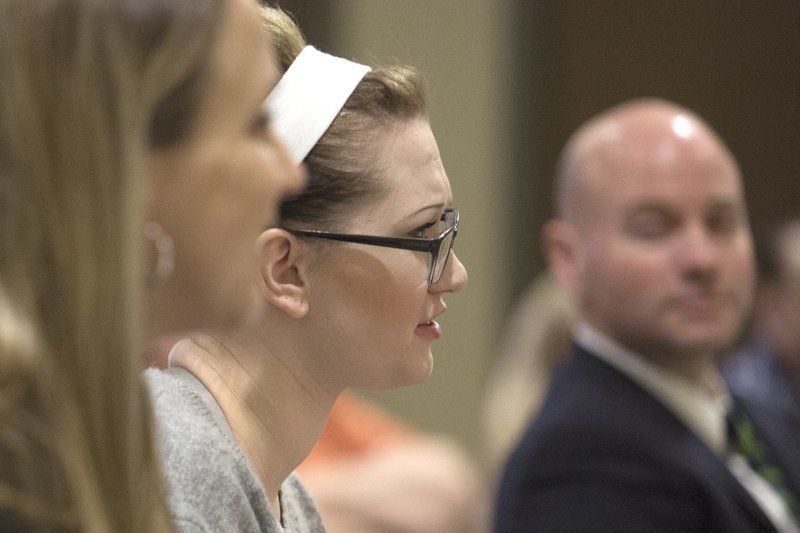 Heather Lotan addresses the court during Community Outreach Court at Safe Harbor in Traverse City. "This is a good thing," said Lotan, a first-time visitor to the program. 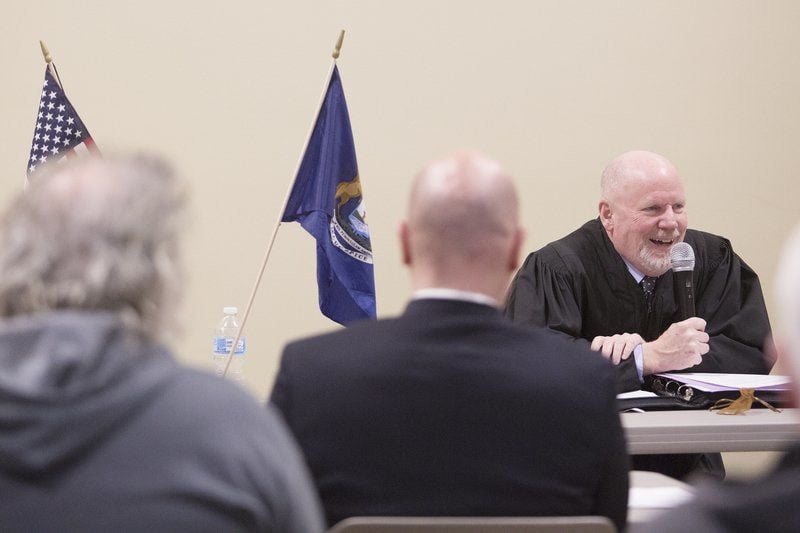 Judge Thomas Phillips laughs during Community Outreach Court at Safe Harbor in Traverse City on Wednesday. The court is held every few months in a non-threatening environment, such as Safe Harbor.

Heather Lotan addresses the court during Community Outreach Court at Safe Harbor in Traverse City. "This is a good thing," said Lotan, a first-time visitor to the program.

Judge Thomas Phillips laughs during Community Outreach Court at Safe Harbor in Traverse City on Wednesday. The court is held every few months in a non-threatening environment, such as Safe Harbor.

TRAVERSE CITY — Shannon Gerke held up a court document stamped in red ink proclaiming more than $1,000 in traffic fines and fees as "paid in full."

The makeshift courtroom at the Safe Harbor homeless shelter exploded in applause and shouts of "woohoo." The softspoken Gerke just smiled.

Gerke, on Wednesday, became the first person to graduate from the new Community Outreach Court — or "homeless court" — in Traverse City.

Her successful completion of the program has given her a clean slate, making it possible for her to stop worrying about going to jail for unpaid fines and to begin finding housing for herself and her two children.

"It's an immense help," Gerke said. "It's helping people to do so much more than they could on their own."

The specialized court lets homeless people pay their fines using another currency, said Heather Abraham, an attorney with Legal Services of Northern Michigan. That means they can agree to get counseling, to stop drinking or taking drugs, to attend 12-step meetings, to find a job and more, with the program specifically tailored to each person.

Gerke and her children, who are 7 and 10, have been living at the Women's Resource Center for about five months. She is now working on getting her driver's license back, an important factor in keeping her employed.

Abraham got the idea for the alternate court from Lauren Trible-Laucht, Traverse City's attorney, who had a homeless offender whose needs weren't being met by the system.

Abraham ran with the idea and secured two years of grant funding for the program, which is modeled after one used nationwide. It has been up and running since August.

Once participants are in the program they must come up with an action plan that addresses the root cause of their homelessness, including their criminal history, and their goals, Abraham said.

"We ask for honesty at every stage so we know what someone is really struggling with," Abraham said. "We're not going to judge. We're going to walk with them."

A survey done a couple of years ago showed that one of the biggest gaps in helping homeless people get back on their feet was the court system, Abraham said. Unpaid court fines can get people stuck in a system of getting arrested for not paying their fines, which can generate even more fines.

When someone enters the program all of their fines are suspended.

"If they complete the program, which takes six to 12 months, they all go away," Abraham said. "If they don't, the fines come back."

Participants meet about every two months with Judge Thomas J. Phillips, who administers the program. Hearings never take place at the courthouse, as that is a place where homeless people aren't generally comfortable.

This month it commenced at Safe Harbor, where the room was packed with people like Freddy Buchanan, who is now working, going to counseling and chairing meetings in his 12-step group.

"I'm a lot happier today than I used to be. It's time for me to give back to my community," Buchanan told Phillips.

"You are all doing a great job," Phillips said. "I am so proud of you."

Those in the program are referred by an advocate, someone who works for one of several agencies around town that have contact with homeless people, such as Addiction Treatment Services, the Women's Resource Center or Community Mental Health.

Those advocates go to court sessions with their client, giving Phillips an update on their progress.

He told Phillips he admires Gerke's creativity in coming up with solutions to her problems, and courageous in overcoming adversity.

"When I first met Shannon I don't think she believed there were people out there who were willing to help her, like the Community Outreach Court," Mormann said.

Abraham said the program is more successful than she could ever have imagined.

"Everybody showed up around the table," she said. "This community has floored me. This program is flourishing."