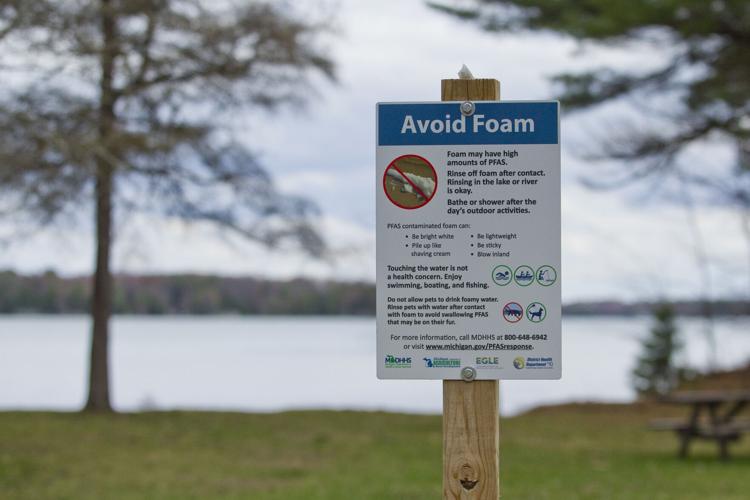 A sign warns visitors to avoid foam in Lake Margrethe, which could contain high levels of PFAS, at Lake Margrethe State Forest Campground. 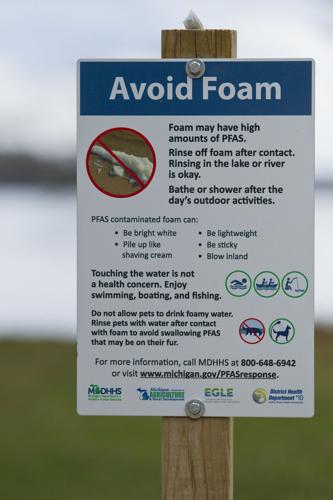 A sign warns visitors to avoid foam in Lake Margrethe, which could contain high levels of PFAS, at Lake Margrethe State Forest Campground near Grayling.

A sign warns visitors to avoid foam in Lake Margrethe, which could contain high levels of PFAS, at Lake Margrethe State Forest Campground.

A sign warns visitors to avoid foam in Lake Margrethe, which could contain high levels of PFAS, at Lake Margrethe State Forest Campground near Grayling.

Some of the coming testing may even lead to an expanded number of Grayling Township residents eventually receiving clean water solutions paid for by the Michigan Army National Guard.

“There’s a lot of work that’s planned for the Grayling area this spring and summer,” said Jonathan Edgerly, environmental program manager for the Michigan Department of Military and Veterans Affairs.

Participants learned during a webinar last week about the planned water sampling collection in coming months, as well as how the current remedial investigation and feasibility study should be expected to unfold.

Officials said that feasibility study for the airfield will begin during the coming winter and will help officials determine the preferred way to cleanup the PFAS pollution, which has tainted the private drinking water wells of hundreds of area residents.

This summer will bring that site characterization work both on and off base property through the collection of samples of groundwater, soil, sediments, and both surface and drinking water sources, she said.

Then comes the feasibility study and an ultimate decision by National Guard officials about how to adhere to Michigan standards for PFAS pollution cleanup adopted last year.

“After that analysis is complete, the (Army National Guard) will determine which state requirements apply to the areas under investigation and potential future actions are also analyzed during the feasibility study,” Packer said in an email response.

Michigan officials last year set maximum contaminant levels for seven of the thousands of chemicals classified as PFAS — an acronym for man-made per- and polyfluoroalkyl substances — dubbed “forever chemicals” because of their resistance to degrade and ability to accumulate in people’s bodies.

Studies have found potential links between high levels of PFAS in the body and a range of illnesses, including kidney cancer, increased cholesterol levels, fertility problems and more.

Meanwhile, Guard officials said they will send out about 240 requests to do follow-up sample collection at homes where PFAS levels did not previously surpass the federal lifetime advisory standard of 70 parts per trillion; that means the residences that did not already qualify for paid-for connections to municipal water or whole-house filters.

Packer said homeowners who agree to additional sample collections will provide an investigative advantage: when it comes time to analyze those homes against the new state standards, the Guard will already have its own data set and be ready to act.

Other good information came out during the online community meeting.

Christiaan Bon, Grayling PFAS site manager for the state Department of Environment, Great Lakes and Energy, explained how the types of PFAS chemicals primarily discovered in the Grayling area include PFOA, PFOS and PFHxS.

That indicates the pollution was caused by a “legacy release” of older forms of firefighting foam, not more contemporary versions of the toxic substances.

Most of the known contaminated residential wells are close to Camp Grayling’s airfield, the first area to be investigated. Bon also discussed results of more recent testing around the main cantonment area by Lake Margrethe, particularly the southeast corner of the water body.

“It looks like PFAS is discharging to the lake,” Bon said.

He explained how PFAS foam can be expected to develop on the downwind shorelines of Lake Margrethe; health officials said contact with such foam should be avoided or rinsed away if it is touched.

More work is expected to continue, but he said officials tested sediments collected in Lake Margrethe’s outflow stream in its northwest corner, Portage Creek, which showed “non-detect” results. That indicates PFAS pollution may not be flowing out of the lake, Bon said.

A collection of the Record-Eagle's continuing coverage of PFAS contamination in northern Michigan: