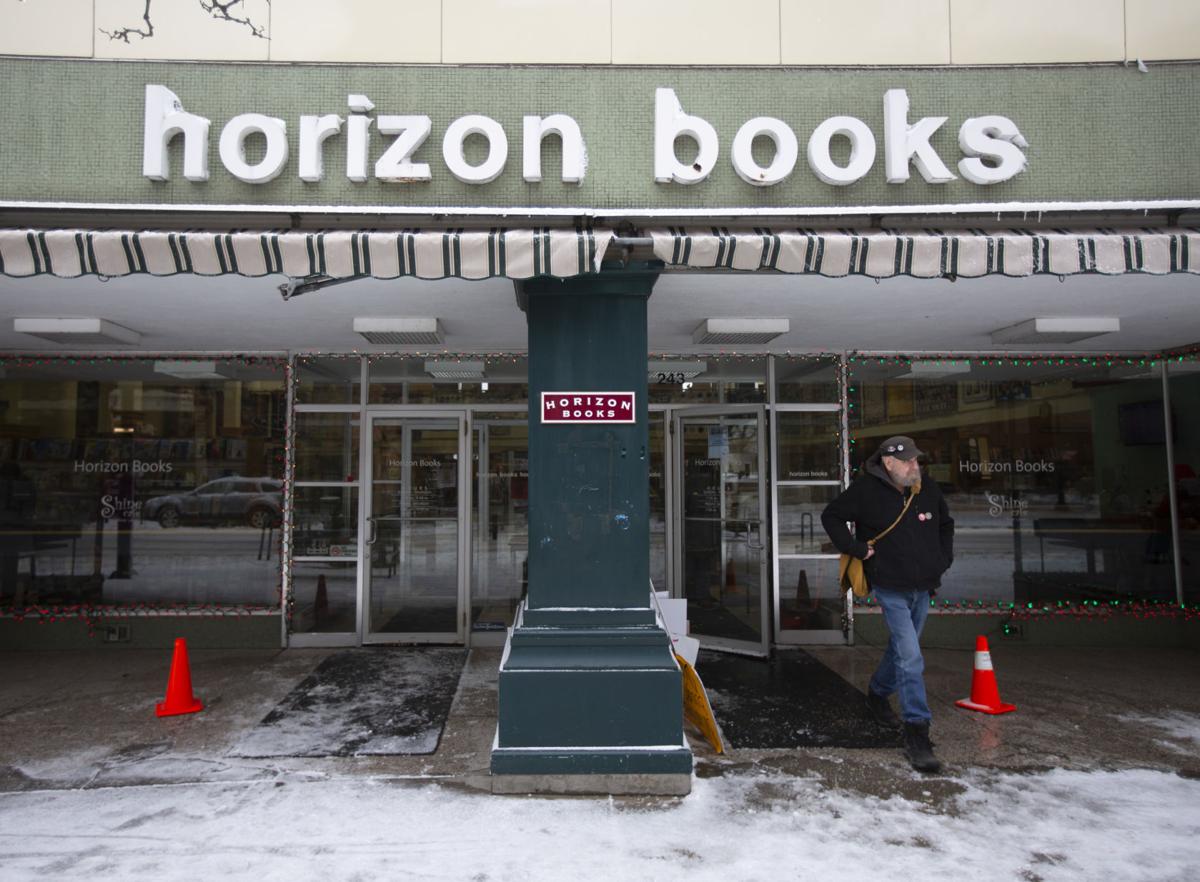 A man exits Horizon Books in Traverse City on Saturday, Jan. 11. Horizon books will close sometime in 2020 after 58 years of bookselling. 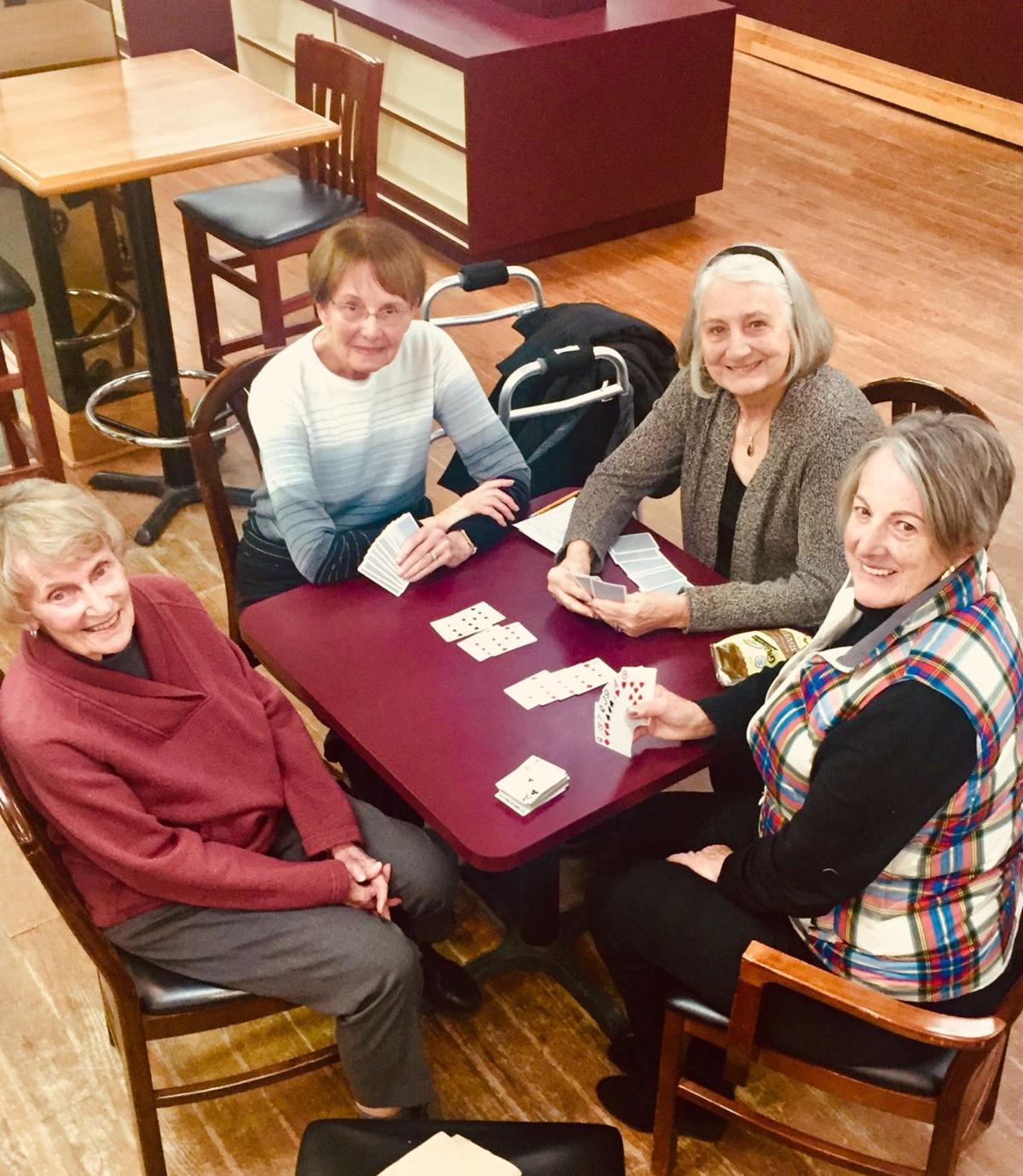 Horizon Bridge Club members, clockwise from left, Sharon Vitale, Barb Harman, Donna Moore and Bonnie Willings. The foursome has been meeting in the lower level the third Friday of the month for years.

A man exits Horizon Books in Traverse City on Saturday, Jan. 11. Horizon books will close sometime in 2020 after 58 years of bookselling.

Horizon Bridge Club members, clockwise from left, Sharon Vitale, Barb Harman, Donna Moore and Bonnie Willings. The foursome has been meeting in the lower level the third Friday of the month for years.

TRAVERSE CITY —For 17 years — then again, maybe it was 20 — four local women have met in the lower level of Horizon Books to play bridge.

The other players nodded their agreement.

“We were the Horizon Bridge Club,” Sharon Vitale sighed. “Now we’re going to have to change our name.”

Following an announcement by owners Amy Reynolds and Vic Herman that the bookstore will be closing this year, the couple said they’ve received an outpouring of support.

“And all the letters, they’re really well written!” Herman said.

“Yes,” Reynolds agreed, “they’re all so eloquent. But you have to remember, our business was words.”

Since telling employees about the closure, and announcing it a week ago, there have been thousands of comments on social media, coverage from Detroit-area newspapers and area television news anchors arriving to set up camera tripods.

Online comments varied from, “I wish them nothing but happiness, but dang!” to, “Devastating, Horizon served as an anchor for this whole community,” to “Can anyone float me a loan? I would love to buy the bookstore and keep it in the community.”

Reynolds and Herman said reports they have already made a decision about who to sell the building to, or what the space will become, are premature.

“It’s been an exhausting week,” Reynolds said Friday. “And we’re still both so emotional. Neither of us is in any shape to make a decision and we probably won’t be for a week or two.”

Longtime employee Marla Van Hook said every customer has wanted to talk with her about the closure.

“Here in the store, and over the phone, everyone has an idea,” Van Hook said. “And of course they want to save it as a bookstore. What people who aren’t in the book business don’t understand is that the size here might not be sustainable.”

Horizon is a large store, as independent book retailers go, and occupies 22,000 square feet over three floors on the north side of Front Street in downtown Traverse City.

Hundreds of new bookstores opened across the country — contributing to a revived industry, according to the American Booksellers Association — but did so by competing small.

Today, ABA data shows, many new stores occupy less than half the space Horizon does. Some are less than 1,000 square feet.

Earlier in its history, the store was smaller, and in a different location across the street. Then a department store closed, Reynolds and Herman saw the chance to expand and made the move.

Willings said she and others were grateful.

“When J.C. Penney’s closed, there was a shock wave over what would happen to downtown,” Willings said. “When Horizon saved the day, well, we all thought they would be here forever.”

While staff at the store field well-wishes, thank-yous, and ideas, Reynolds and Herman are inundated by real estate agents, entrepreneurs and investors.

They own the building, the space above the store is currently vacant, but has plumbing and was divided into apartments at one time, Herman said.

Some customers suggested a roller rink, and WTCM radio personality Ron Jolly reportedly came by with a tape measure to see if the lower level would work as a shuffle board court.

“We’re still thinking,” Herman said, “and just trying to put something together that makes sense.”