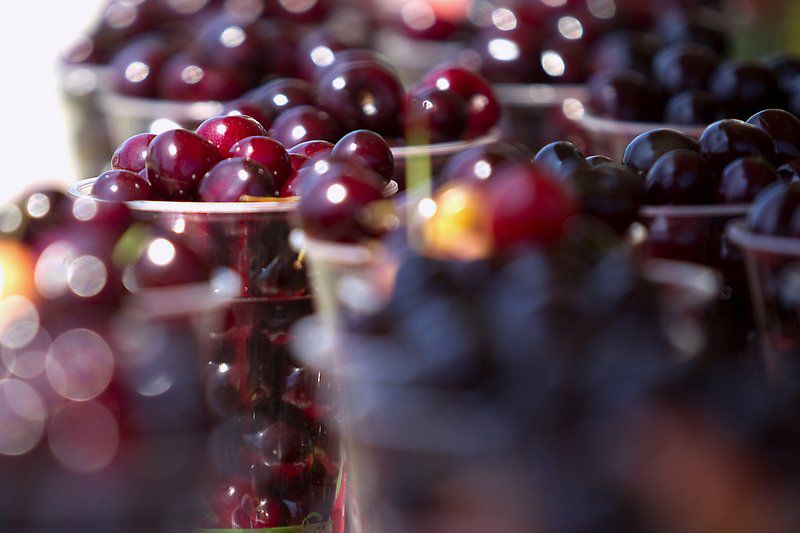 Cherries for sale in a tent on the Fourth of July during the 90th National Cherry Festival in Traverse City. 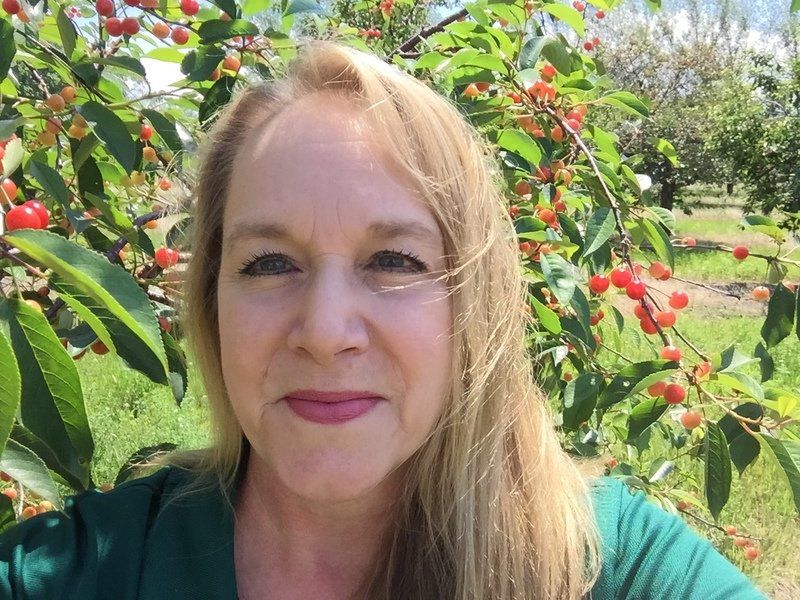 Misha Hunter often cooks with cherries and has a number of cherry-based recipes in her kitchen cookbook. 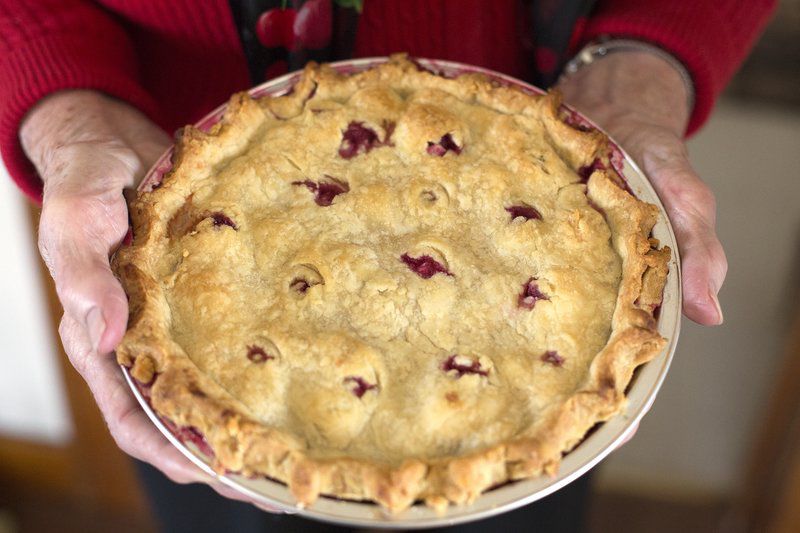 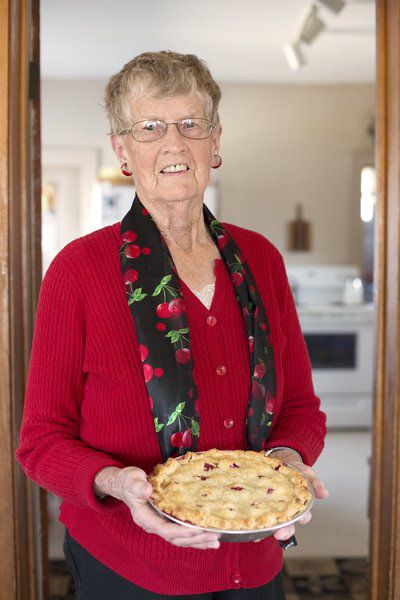 Cherries for sale in a tent on the Fourth of July during the 90th National Cherry Festival in Traverse City.

Misha Hunter often cooks with cherries and has a number of cherry-based recipes in her kitchen cookbook.

She learned from her mother Bonnie Slaven, who was not only an accomplished pie baker, but the first Cherry Pie Queen of Traverse City in 1957.

"I love the tartness of cherries and what they add to flavor, from pies to cakes," Hunter said.

Frozen cherries are destined for pies and cakes; dried go into cookies and salads.

"What a great find dried cherries are," Hunter said. "When recipes call for raisins, I definitely switch it out to cherries because it tastes so much better. It just ups the flavor so much more."

Lynda Herkner grew up on an Old Mission Peninsula farm where her family had "cherries for everything."

Her father Oswald Herkner was way ahead of the cherry-juice-for-health trend. He religiously drank cherry juice for many of his 82 years, she said.

"We'd crush the cherries and he would drink the juice and say it was good for arthritis," Herkner said. "Everybody laughed at him."

Herkner, now 79, recalled making pies with her mother, Etta, for the family farm stand. She and her mother baked 80 pies a day. Herkner and her sisters later turned the family cherry topping recipe into a business, which still operates under the family name after its 2015 sale.

Cherries were their life, Herkner said.

Mary L. Lyon, one of 19 children from a Kingsley farming family, spent summer "vacations" picking cherries on the Old Mission Peninsula. She married her husband Whitney in 1955 and they eventually took ownership of Island View Orchards, home for six generations of the Lyon family.

They had 10 children, and Mary learned to bake with cherries to feed the family and the workers who help with the harvest, she said.

"During the harvest, I make one every day here for the men in the orchard — that would probably be at least 20 pies," she says. "I've been doing that for, I'd say, probably 55 years."

Her pie is her pride, based around the crust recipe she swears by after much trial and error — and tart cherries.

"I always use Pillsbury's Best flour and sift it three times," she said. "And I always use Crisco yellow — I used to use the white but the yellow is so much more pliable."

Now 83, Lyon still picks her own cherries every year from one particular tree that the shaker doesn’t touch. After pitting them by hand, she puts them into freezer-safe plastic bags and freezes them immediately — about 24 pounds in all.

She won't eat tart cherries fresh, though her husband does, right off the tree. She does like dried cherries for baking and on salads.

Next year is looking good for putting away cherries for baking in the offseason, she said.

"We bought a new refrigerator," Mary said. "It's extra large and it's got lots of freezer space on the bottom."

Along with the classic cherry dishes, the weeklong National Cherry Festival tends to be a time to roll out some new ones.

“One is cherry bomb cookies,” said Larissa Russell, supervisor of the Cass Street restaurant. “They’re like a sugar cookie that has a cherry filling inside. The other is a cherry roll. It’s similar to our cinnamon roll only instead of cinnamon inside we do a cherry pie filling.”

Both Herkner Farms and Fustini’s Oils and Vinegars pledged to donate meals to Food Rescue of Northwest Michigan for items sold during the National Cherry Festival.

Excerpts of this article are reprinted from "Cherry on Top" in the current issue of GT Scene magazine, available at many locations throughout the Grand Traverse region.

There are many quick and delicious recipes that call for using cherry pie filling. I prefer to use a homemade version over buying canned cherry pie filling. This is a recipe I came up with using the 6-pound pail of frozen cherries we sell at Leelanau Fruit Company in Suttons Bay.

This recipe is enough for three pies. Or make a pie and use the rest for other desserts using pie filling. Such as;

In a small saucepan combine sugar, milk and butter. Bring mixture to a boil and boil for 1 minute, stirring constantly. Remove from heat; stir in chocolate chips and almond extract until smooth. Pour and spread over warm bars. Cool before cutting into bars.

Cream together butter and sugar. Add eggs and beat well. Beat in extracts. In a separate bowl combine flour and salt. Add to the creamed mixture. Mix well.

Bake in a preheated 350 degree oven for 30-35 minutes. Cool on wire rack. Combine glaze ingredients and drizzle over the cooled bars.

Another option of the tart cherry is the dried tart cherry. Excellent in cookies, salad; exchange them in recipes calling for raisins. You will be glad you did!

A favorite at family gatherings. The original recipe calls for raisins but I think the flavor of the dried tart cherry gives the salad an extra burst of flavor.

Mix the first six ingredients together in a large bowl. Mix the mayonnaise, sugar and vinegar together until smooth and pour over the broccoli mixture, stir till well combined. Cover and chill until ready to serve.

In a separate bowl, toss the flour, baking soda, cinnamon and salt together. Add to the wet ingredients and mix on low until combined. Stir in the oats, dried cherries and walnuts (if using) until well combined. The dough will be thick and sticky. Chill the dough for 30-60 minutes. Preheat the oven to 350 degrees. Line two large baking sheets with parchment paper. Roll balls of dough (about 2 tablespoons of dough per cookie) and place 2 inches apart on the baking sheets. Bake for 11-13 minutes until very lightly browned on the sides. The centers will look very soft and undone. Remove from the oven and let cool on baking sheet for 5 minutes before transferring to a wire rack to cool completely.