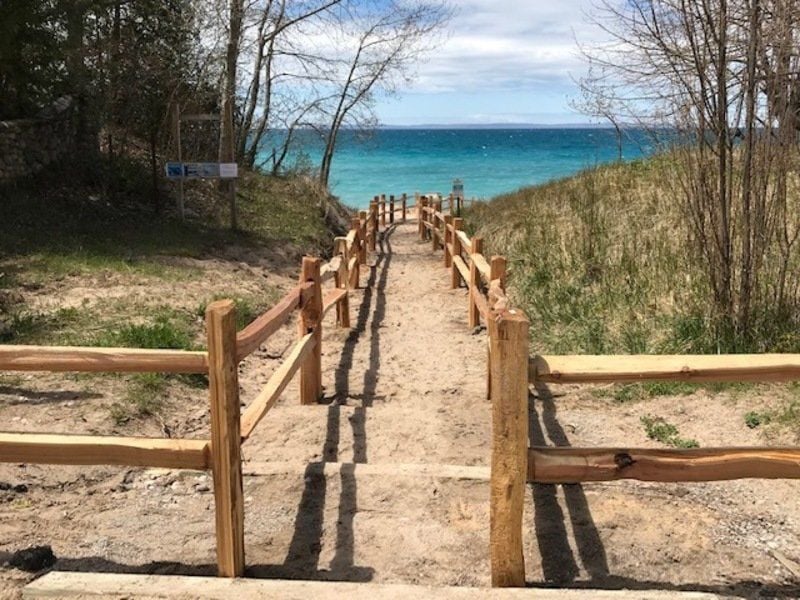 A fence that appeared on the Reynolds Street public road end leading to Lake Michigan in Leland on Thursday was gone by Saturday. Township officials do not know who put it up or took it down. 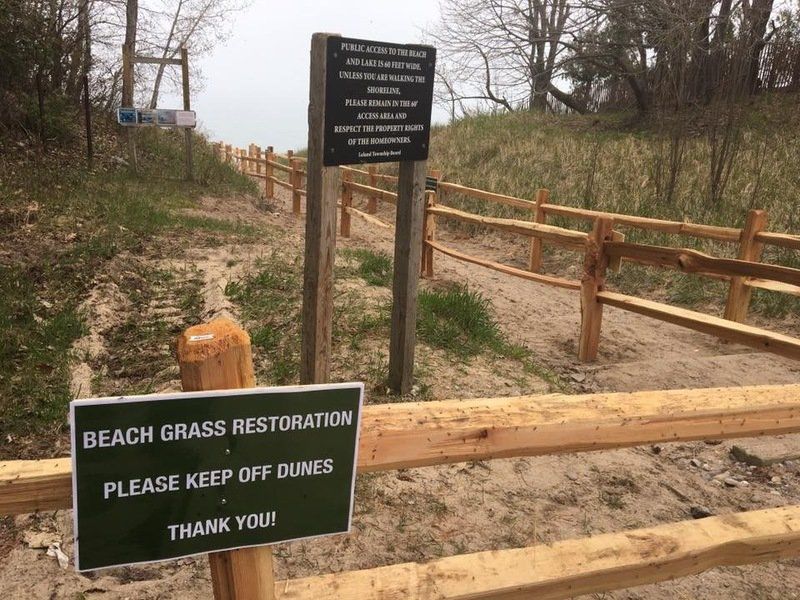 A fence that appeared on the Reynolds Street public road end leading to Lake Michigan in Leland on Thursday was gone by Saturday. The official-looking 'beach grass restoration' sign looks like a township sign, but isn't.

A fence that appeared on the Reynolds Street public road end leading to Lake Michigan in Leland on Thursday was gone by Saturday. Township officials do not know who put it up or took it down.

A fence that appeared on the Reynolds Street public road end leading to Lake Michigan in Leland on Thursday was gone by Saturday. The official-looking 'beach grass restoration' sign looks like a township sign, but isn't.

LELAND — A split-rail fence that mysteriously appeared within the Reynolds Street road end in Leland on Thursday disappeared just as mysteriously Saturday.

Pictures of the fence were posted on the Overheard in Leelanau County page on Facebook, generating hundreds of comments — some pro, many con. The fence's disappearance prompted just as many comments.

The fence followed both sides of a sandy path to the water's edge, leaving a space between its rails of about 3 feet wide.

"It incenses me," said Leland resident Andrew McFarlane. "I am extremely angry. It was built in a public access without permits in violation of all our zoning codes and of the Americans With Disabilities Act. To me that is a serious crime."

McFarlane was walking his dog at the beach at about 11:30 pm. Wednesday and there was no fence. But the next day at about 10 a.m. it was there, he said.

Leland Township Supervisor Susan Och does not know who built the fence, but has a hunch. She speculated that whoever did is likely the same person or people who took it down.

"I wouldn't be surprised if the person who put it up realized they made a big mistake," said Och, noting that township emergency personnel were very upset about the fence.

The fence could have prevented EMS workers from reaching the beach and, if needed, getting someone out on a stretcher, she said.

"Impeding emergency personnel from doing their job can get someone in very big trouble," Och said.

Maureen Fletcher, of Lake Leelanau, spends a lot of time at the beach year-round taking pictures. When she saw it she at first assumed it was put up by the township. Then she realized it probably wasn't.

"If anyone was ever hurt down there EMTs would have a problem getting them because it's not wide enough," Fletcher said.

The fence was placed on the 60-foot-wide Reynolds Street road end, which is considered Leelanau County property and is under the jurisdiction of the Leelanau County Road Commission.

The road end has long been used as a public beach known to locals as South Beach, with the township placing signs, trashcans and water rings there.

"I disagree with what they did," Fletcher said of the fence-builders. "That's a public beach and I think it should be available to people who want to go down there."

But the Road Commission has said the road end allows for public ingress and egress to the water for people with kayaks or canoes, but should not be used as a public beach.

The properties abutting the road end on either side are owned by the Janko family on the north and the Joyes family on the south. Alexander Janko, who lives in the home year-round, has been in a dispute with the township for several years over what he sees as the township's inaction regarding beach-goers who trespass on his property, vandalize it and hold drunken parties at night.

Janko's parents, Bela and Abigail Janko, live there in the summer.

The dispute has been exacerbated by high water levels that are taking beaches all over the Great Lakes region. This year Janko would not allow the township to put sand from its annual dredging of the harbor on his property.

The Save Our Shoreline (SOS) organization that works to preserve riparian rights also weighed in on the issue about six months ago, threatening to take legal action against the township for designating the road end as a public beach. They were armed with an online petition from 54 property owners along the Lake Michigan shoreline in the township.

The township has since removed the trashcans and some of the signs there, but left the water rings for safety reasons, Och said.

McFarlane said he has been using South Beach since the early 1970s. He is outraged by what he sees as efforts by SOS and other groups to restrict a citizen's lawful right to public bodies of water.

"I feel this is a part of a much larger effort to deny people access to Lake Michigan," he said. "To me it's really difficult to know that the township is being legally strong-armed."

But in another twist, Och said the township received a letter from attorney Dustin Ordway, who represents the Jankos and the Joyes.

"He claims the road was never properly platted, therefore is not a real road and his clients own the land," Och said.

The township did a title search, she said, with township attorney Robert Parker reporting that while it's unclear who owns the road, it is clear that the Janko and Joyes properties both end at the edge of the road.

Och said the township has been advised that it may want to make a case for "prescriptive easement," which says that when one party uses another's land in the same manner for a certain number of years, they can make a claim to it. In Michigan the bar is 15 years.

The township has been using the road end as a public beach for far longer, Och said. The township plans to meet with Parker and the Road Commission to discuss its options, she said.

"Then we will have to make some decisions. It has been an integral part of the township for many years."

Och said she was annoyed when she heard about the fence.

"This is a stupid distraction."

Och is encouraging people to take the Leland Township Recreation Questionnaire, which will be used as a foundation to update its five-year Parks and Recreation Plan. Both residents and visitors can take the survey, though their answers will be weighted differently.

Poll: Should county road-ends near water be used as public beaches?

Few people are on the fence when it comes to the public-private beach debate ... and in Lela…