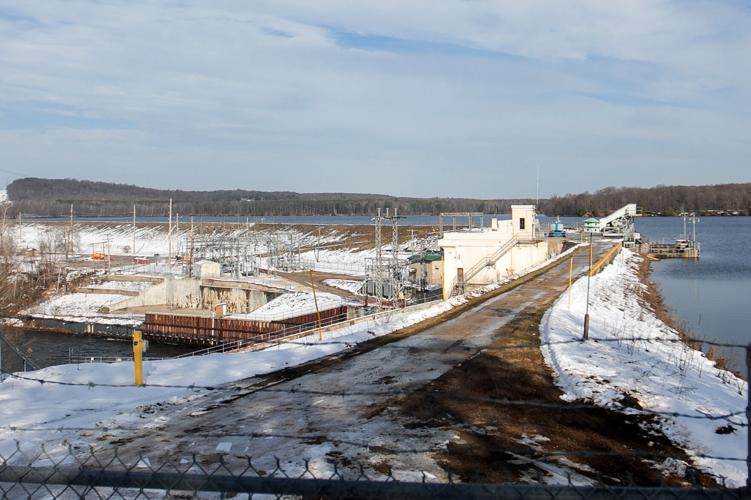 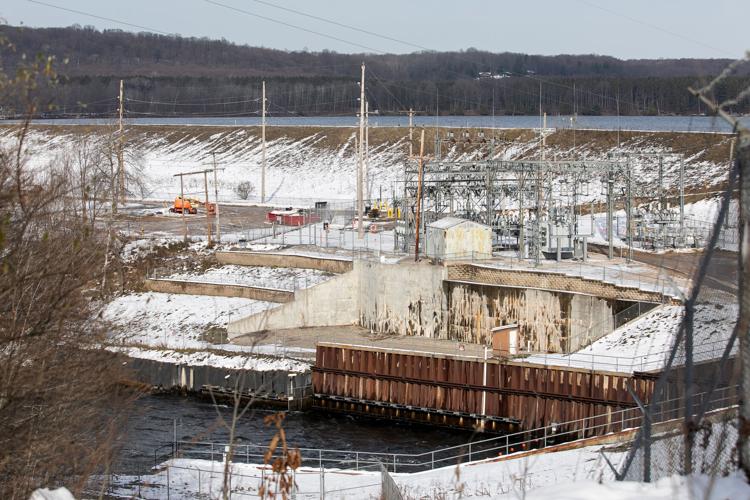 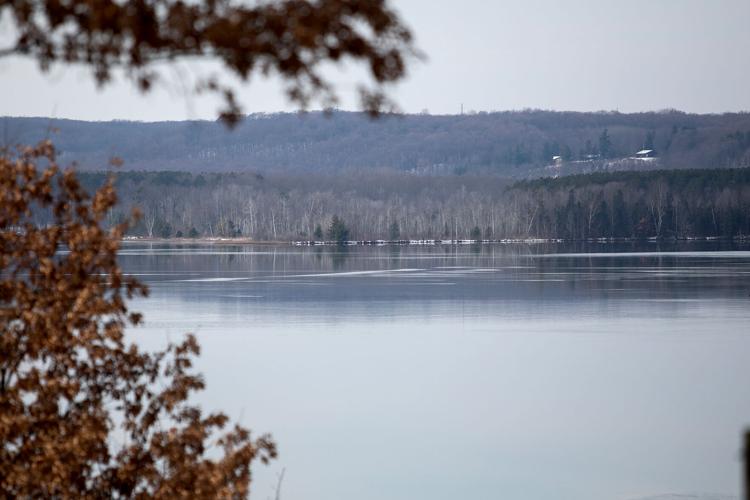 Hodenpyl Dam Pond on the Manistee River near Mesick. 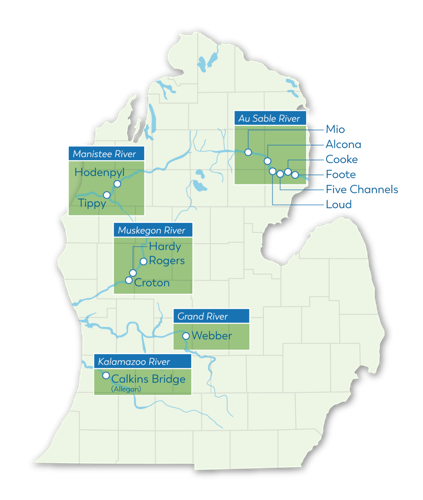 Consumers Energy is debating the future of its 13 hydroelectric dams, including whether to keep the impoundments in place or to remove them.

Hodenpyl Dam Pond on the Manistee River near Mesick.

Consumers Energy is debating the future of its 13 hydroelectric dams, including whether to keep the impoundments in place or to remove them.

MESICK — Hodenpyl Dam has been humming along since 1925, churning out megawatts as the Manistee River flows through, all the while holding back a nearly 1,800-acre pond.

Now, the long-term future of a structure that’s older than most people and that helped birth an era of electrification in Northern Michigan is in question as maintenance costs mount and cheaper clean-power alternatives gain a foothold.

Consumers Energy, the same utility that built Hodenpyl and created the pond behind it, is weighing its future —along with that of 12 other dams it owns.

Several of these dams have federal licenses expiring in 2034, and the utility must weigh their fates ahead of a relicensing process that typically takes several years, according to the utility.

Of the four main options — relicense the dam, sell it, replace it with another structure or remove it — the latter would drain a pond that winds around 5 miles from earthen bank to the M-55 bridge.

Brian Wheeler, a spokesman for Consumers Energy, said the utility always has the responsibility to examine its business from an economic perspective, including providing power at the lowest cost. Its customers ultimately pay those costs.

But for a company that boasts of a “triple bottom line” of people, planet and prosperity, there are plenty of other considerations to weigh beyond dollars-per-kilowatt.

“One thing I can say as a certainty is that, not just with Hodenpyl but with all of the dams that we operate, we know there’s a tremendous community impact, and oftentimes it’s recreational facilities, in some places there’s camping, fishing— and that ultimately has a positive economic impact on the communities,” Wheeler said.

Pontoon boats ply the bayous along its southern shore and anglers often cast from boats and the embankment.

“We know that Hodenpyl Dam means a lot to people who live in the community and also to people who visit, people who probably spend weekends or weeks in summer ... so yeah, that’s a consideration,” Wheeler said.

The dam itself stands 90 feet high and 4,270 feet long, according to the utility. It generates 5.57 megawatts on average of a maximum 17 megawatts.

Nearby, the North Dakota-to-Vermont North Country Trail passes along one shore, and it crosses the Manistee River just downstream of the dam on a wooden suspension bridge lovingly dubbed “Little Mac” in homage to the Mackinac Bridge.

At issue is whether to keep the impoundments in place, or remove them. The decision has more potential to alter Michigan’s rivers and the communities that surround them than perhaps any action since their construction stopped up the rivers and inundated a collective 17,200 surrounding acres with water that people built lives and livelihoods around.

While the company is years from making a decision, its deliberations are drawing keen interest from nearby residents who fear lost property values and dying towns, from electric ratepayer advocates wary of the high costs to maintain dams that deliver little power, and from environmentalists who see a once-in-a-lifetime chance to restore rivers harmed by the impoundments.

It’s an emotional topic in communities where the lakes these dams create have become a vital resource.

Alcona Dam, one of Consumers Energy’s six dams on the Au Sable River, stands near Glennie, a tiny burg that bills itself as the “Heart of the Huron National Forest.” The dam went online in 1924.

At the time, before policy had caught up to the environmental consequences of dams, the impoundments seemed like miracle assets, delivering emissions-free power as reliably as a river flows. The ponds they created became destinations for boating, swimming and fishing, fueling tourism in a part of the state with limited jobs.

But fast forward a century, and the same structures have become expensive, environmentally costly assets that deliver negligible amounts of power at a premium price.

The utility’s questions over the future of the dam, including whether its existence remains justified, led Tonya Wertheimer to wonder: If the Alcona Dam were to disappear tomorrow, taking with it the 1,075-acre reservoir that draws tourists all summer long, would Glennie’s grocery store be next?

“Where are we gonna buy our bread?” the 67-year-old resident said through tears at a recent public meeting hosted by Consumers. “Where are the people that actually live here, where is this community going to survive?”

Consumers and its predecessors once owned 90 dams across the state.

They generate electricity by stopping rivers and forcing water through a spillway, where it turns a turbine that spins generators.

But the cheap, reliable form of energy had massive environmental trade-offs. The dams fragmented rivers and warmed their water, harming fish and blocking their migration. The fillup and drawdown of reservoirs interrupted natural rhythms that guide many river species’ reproduction and growth cycles. And sediments became trapped in reservoirs, starving the river downstream while causing the ponds to fill with silt.

“It’s not best for the river,” said Tess Nelkie, board secretary of fishing and river conservation group Anglers of the Au Sable. “And it’s not best for everything that lives in the river.”

Over time, the economics of power generation shifted, too. New regulations ended the practice of “peaking,” or filling and then rapidly draining reservoirs to maximize power output during times of high demand. As a result, the dams now operate at less than 40 percent of their capacity.

And cheaper energy sources entered the fray while the aging dams became increasingly expensive to operate and maintain.

Amid those changes, Consumers sold or retired most of its dams between the 1940s and 1970s. The 13 that remain provide just 1.2 percent of the utility’s annual power mix, barely enough to cover their $12.6 million in annual operating costs.

And at an average of 105 years old, Consumers says the dams need hundreds of millions of dollars in maintenance and upgrades to continue operating safely.

The company’s dilemma is familiar: More than 80 percent of Michigan’s 2,521 dams have aged beyond their intended life span, resulting in growing costs to keep them going. Hydropower’s waning cost-competitiveness at times leaves dam owners struggling to cover those costs.

Those imbalances played out dramatically in 2020, when two privately-owned Midland area dams failed amid heavy rainfall. Regulators for years had flagged safety issues at the dams, but Boyce Hydro insisted it lacked the money to make fixes.

Federal regulators consider Consumers’ dams to be in satisfactory condition, with none of the alarming deficiencies that plagued the Midland dams. But licenses for 11 of the 13 dams will expire in 2034, putting the company on a timeline to decide whether it’s logical to make the investments needed to keep them safe for the future.

Consumers plans to announce its preferred solution for each of the 13 dams next year. After that, state and federal regulators will decide whether the company can move forward with its plans.

The idea of losing the dams has nearby residents nervous.

On the Kalamazoo River, hundreds of residents who live on the reservoir created by the Calkins Bridge Dam have joined a property owners’ association that is lobbying for its survival. On the Au Sable, a Facebook group has cropped up devoted to saving the dams.

And across the state, large crowds showed up at public meetings with Consumers to voice their fears about the future.

“All of these communities are dependent on waterways that are created out of those dams,” said Coco Soodek, president of the Lake Allegan Association, which represents landowners on the impoundment created by the Calkins Bridge Dam, near Allegan in the Kalamazoo River. “And the communities that surround those bodies of water would be destroyed.”

Environmentalists counter that Consumers’ process are a rare opportunity to undo the environmental impacts of dams, which have thwarted the survival of migratory fish and other river life.

Take, for example, the Muskegon River, where migratory native lake sturgeon once had free reign of the 219-mile river from Lake Michigan to Higgins Lake. Now, the massive ancient fish can go a few dozen miles before a concrete wall blocks their path. Cut off from spawning habitat in lakes and rivers across the state, Michigan’s sturgeon population has shrunk to 1 percent of its historic size.

“If you were to take out all the dams,” said Scott Faulkner, executive director of the Muskegon River Watershed Assembly, “you would have a fishery that some have estimated is 50 to 100 times more productive than if the dams were here.”

Dams also warm rivers by trapping water in reservoirs and then releasing the sunbaked water downstream, harming fish such as trout that prefer temperatures below 70 degrees. Summer temperatures in the Au Sable River’s storied trout waters routinely exceed that threshold below Consumers’ dams, said Bob Stuber, executive director of the Michigan Hydro Relicensing Coalition, an environmental and conservation group focused on the impacts of dams.

As climate change warms the world’s rivers, environmentalists see dam removal as key to protecting coldwater fish like trout. Because Michigan’s northern rivers are springfed, Stuber said, they are poised to withstand climate change far better than western streams that rely on snowmelt.

“Think of how important Michigan streams will be?” Stuber said.

Groups like his and the Angler’s of the Au Sable generally favor removing most dams, while maintaining a downstream barrier to keep Great Lakes invasive lamprey from entering rivers.

The DNR prefers dam removal wherever feasible, a position it made known in an Oct. 21 letter to Consumers’ executive director.

James McKormick, supervisor in Curtis Township, which includes Glennie, is familiar with the statistics on the dams’ environmental tradeoffs. But he has a few of his own:

Eighty-six thousand people come to recreate on the Alcona Dam’s reservoir each year, including those who fill up the township’s 450-site shoreline campground all summer. Those tourists frequent nearby canoe liveries and corner stores, restaurants and motels. Without them, McCormick said, communities surrounding the dams would wither.

The river “might be a better place to fish,” he said, “but there wouldn’t be anybody around here to fish it.”