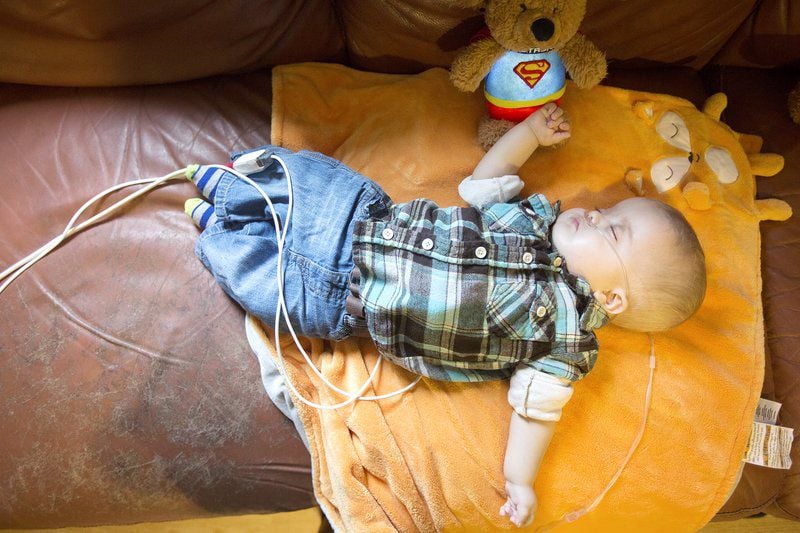 Seven-month-old Jaxon sleeps on the couch at his home in Interlochen. 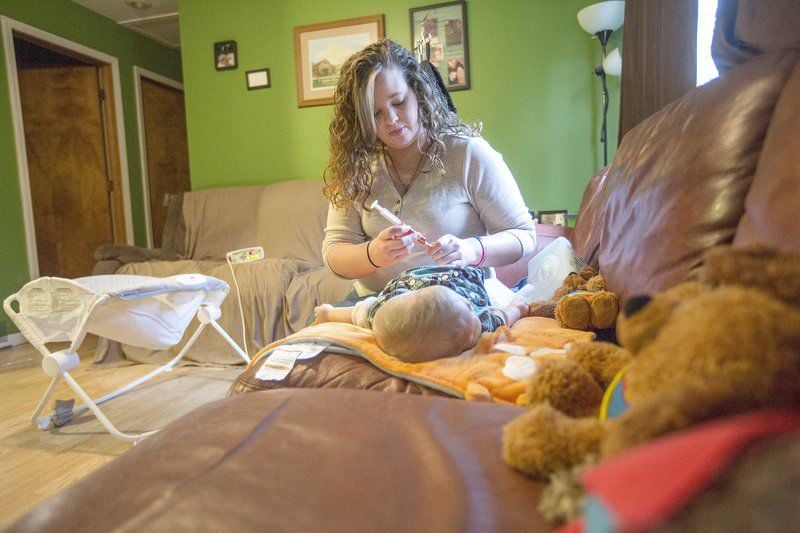 Jessica Mack administers medication to Jaxon Gary through a tube in his stomach three times a day. Medication in the morning and at night can take up to 45 minutes. 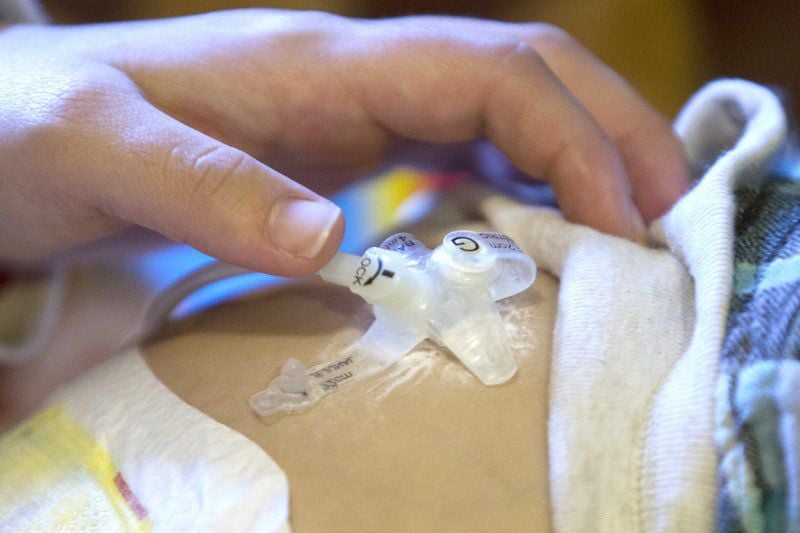 Jessica Mack touches Jaxon Gary's gastro-jejunal tube. He has a tube into the stomach and one that goes through to the small intestine. Jaxon gets his 22 hours of food and three separate doses of medicine directly through the tube. 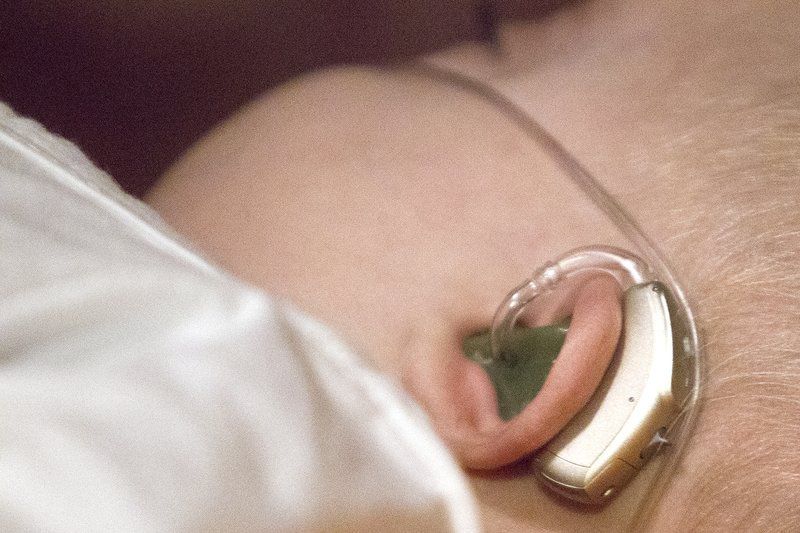 Jaxon has two hearing aids which his parents use while at home. Jaxon is unable to hear otherwise and is mostly blind. 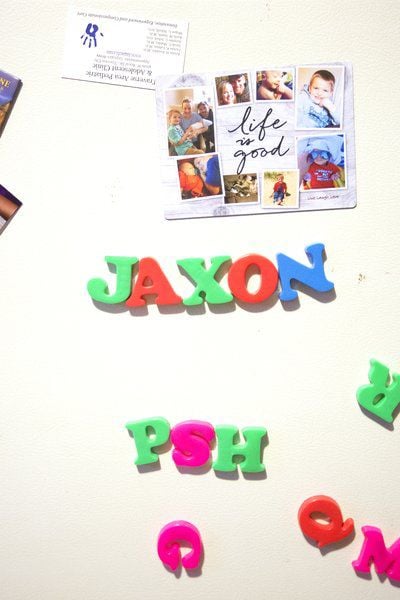 Magnets spell out Jaxon’s name on the fridge at their Interlochen home. 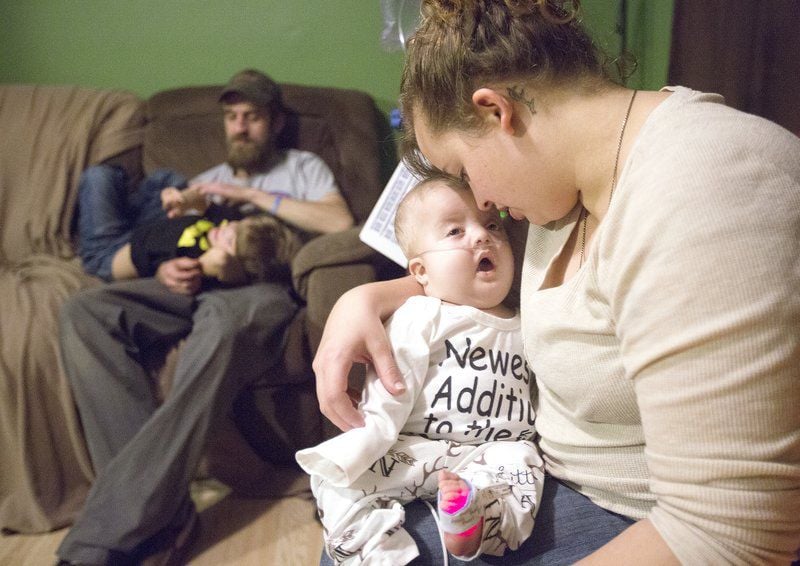 Seven-month-old Jaxon sleeps on the couch at his home in Interlochen.

Jessica Mack administers medication to Jaxon Gary through a tube in his stomach three times a day. Medication in the morning and at night can take up to 45 minutes.

Jessica Mack touches Jaxon Gary's gastro-jejunal tube. He has a tube into the stomach and one that goes through to the small intestine. Jaxon gets his 22 hours of food and three separate doses of medicine directly through the tube.

Jaxon has two hearing aids which his parents use while at home. Jaxon is unable to hear otherwise and is mostly blind.

Magnets spell out Jaxon’s name on the fridge at their Interlochen home.

TRAVERSE CITY — Parents of new babies may spend the holiday season preparing for the first Christmas. They’ll hang special ornaments and shop for the perfect gift.

Instead Jessica Mack and Andrew Gary’s son’s first will be his last.

They monitor Jaxon Gary’s heart rate and oxygen levels. They administer medication to their son three times a day. They clean his gastro-jejunal tube twice a day. They drive to Grand Rapids four times a month for doctor appointments.

Jaxon is in hospice care at 7 months old.

He was diagnosed with peroxisome biogenesis disorder at two months old. PBD is a rare, genetic and terminal condition, according to the Global Foundation for Peroxisomal Disorders. Doctors determined Jaxon has Zellweger Syndrome.

“These disorders exist on a spectrum, some more severe than others,” said Kristie Koehler, Jaxon’s pediatrician at Traverse Area Pediatric and Adolescent Clinic. “On the severe end, such as Zellweger Syndrome, babies may never gain head control or roll over.”

Peroxisomes are small organelles in every cell of the body, so the disorder affects most of Jaxon’s body. He can’t hear, his vision is bad and he can’t really control his limbs, according to Mack. His parents think he can see lights, so they use light-up toys to play with him.

When an infant is placed in hospice care the family is still allowed to seek treatment from doctors. The hospice team is around to help with medical supplies and checks in on the family about twice a week.

Jaxon’s health has had a backslide lately. The hospice nurses hope he will make it to Christmas — the day after, he’ll be 8-months old, Mack said.

Joshua Swartout dotes on his little brother. When it comes time for Jaxon’s medicine, Swartout can’t wait to help his mom administer it. At night, he reads Jaxon a bedtime story. While accompanying his mom and brother to the doctor’s office, he grabbed a sticker from the nurse for Jaxon, too.

“Joshua is the best helper,” Mack said of her 8-year-old son.

Mack said Swartout tells Jaxon he loves him every morning.

When Swartout got his wish, he didn’t realize it would be for such a short time.

Mack and Andrew Gary, Jessica’s boyfriend and Jaxon’s father, recently had to tell Swartout that Jaxon wouldn’t be around forever. He’d already lost a few family members in the past year and Mack said it was a tough conversation to have with her son.

Yet aside from the medicine — and the 22 hours of food Jaxon requires through his gastro-jejunal tube, which is always connected at his stomach — the family routine is fairly normal.

Jaxon wakes up and Mack spends the day with her baby; she left her job at Federal Armored Car when they got Jaxon’s diagnosis. They do some physical therapy and occupational therapy on the couch in between Jaxon’s naps. He can sleep for 20 hours a day, Mack said.

“We snuggle for a while,” she said. “There’s lots of snuggles.”

When Andrew Gary, 30, comes home from work at Traverse Body and Paint Center, they gather in the living room for family time.

Jaxon is Andrew Gary’s first child. He said Jaxon means everything to him. But the uncertainty of Jaxon’s future hits him hard every time they get more medical news about the infant boy.

Jaxon’s doctors said he can have a seizure every 20 seconds while he is awake, according to Mack.

“No child should have 200-plus seizures a day,” Mack said. “We call him our Superman.”

His medication in the morning and night takes 45 minutes to administer through the tube attached at his stomach.

The whirring noise from the oxygen machine Jaxon relies on to breathe floats down the hallway of their home in Interlochen. Tubes connecting his feed and oxygen trail through the living room to where Jaxon sleeps on the couch.

Jaxon sleeps in a pack-and-play next to his parents’ bed at night, often holding on to Mack’s hand all night long.

On Thursday and Friday the family took a trip to Helen DeVos Children’s Hospital in Grand Rapids. Mack could remember nine appointments they had over the two days, but was sure she was forgetting some.

“My mom-gut is scared for these appointments but I’m also hopeful,” she said.

She said there are days she forgets to eat.

Between the doctor appointments and the extra care Jaxon requires, the past seven months of their life have been a little hectic. Mack said they couldn’t do it without their amazing families.

“We have a great support system,” she said. “We both have big families and close friends.”

The family also has a Facebook page to spread awareness of Jaxon’s illness called JaxStrong where they share updates on Jaxon’s health and his “journey to beat the odds.”

Mack’s family organized a benefit dinner for Jaxon on Dec. 12. A spaghetti dinner and silent auction at Leland Public Schools comes before the boys basketball game where the varsity team will wear special warm-up jerseys. Local businesses donated goods and services for the silent auction.

“I love him, he’s my grandkid,” said Mike Mack, Jessica’s father. “We would do anything for him.”

Mike and his wife, Rhonda Mack, worked together setting up the benefit dinner.

“We like to spread awareness of the disease and the fight he puts up daily,” Jessica said. She said many people have come to her saying how they’ve changed their outlook on life since meeting Jaxon and hearing his story.

“I hope maybe one day our experiences can help someone else,” she said, “I hope no one else has to go through this, though.”

Andrew Gary, Jessica, Swartout and Jaxon put their Christmas tree up a few days ago.

Jessica said Jaxon liked it when they lit up the tree. Ornaments from Swartout’s first Christmas hang on the tree. His favorites are the handmade pine cones and paper cutouts he made.

For Christmas, Jessica wants a nice family photo of all of them. They’ve taken many over the past months but haven’t had time to print any out.

They hope to spend the Christmas holiday with family.

“A mom with a special needs kid, we need a ‘Hello,’” she said. “We need to know that we are normal.”