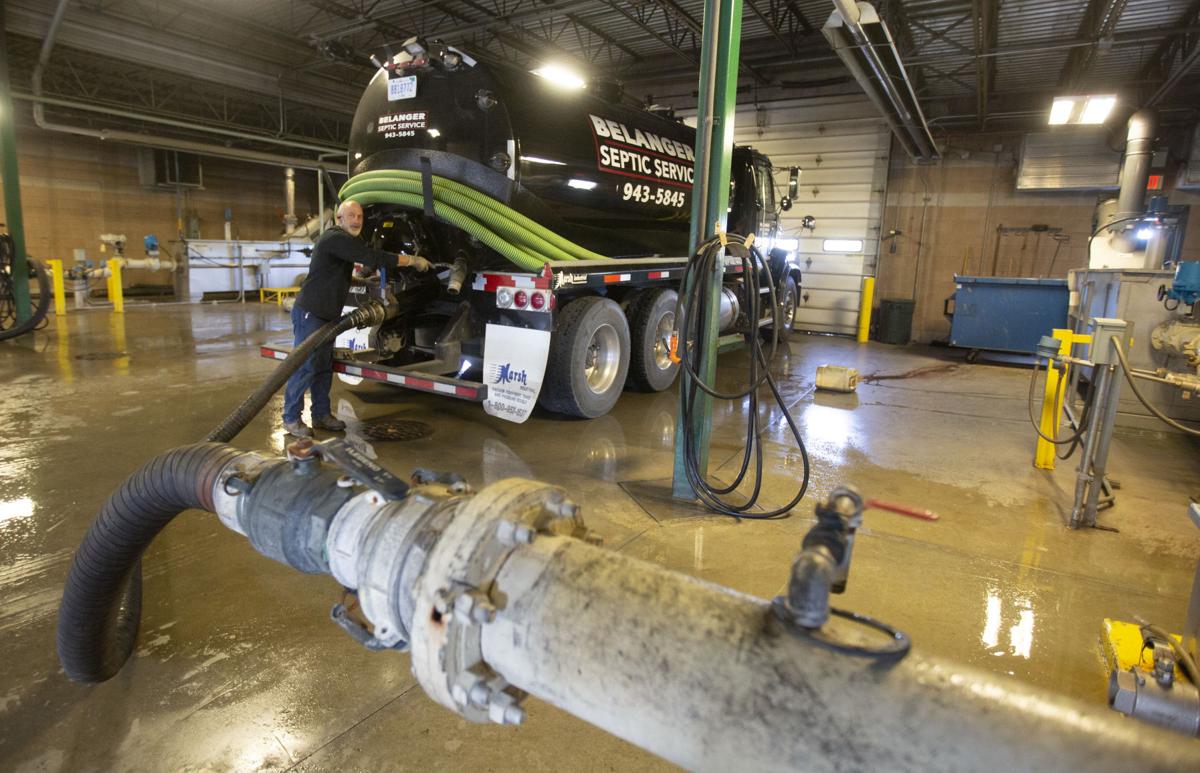 Larry Yetter, a driver for Belanger Septic Service, unloads his truck at the Septage Treatment Facility in Traverse City on Friday. 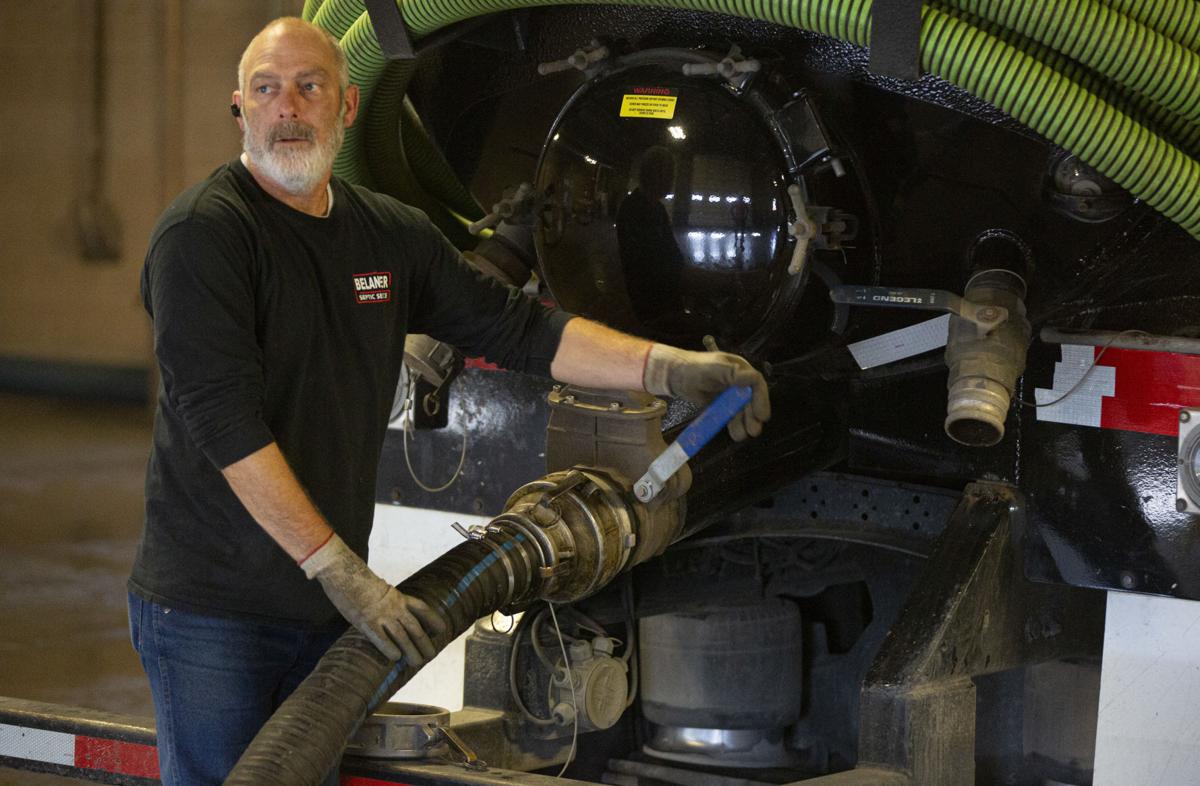 Larry Yetter, a driver for Betner Sanitation, unloads his truck at the Septage Treatment Facility in Traverse City on Friday.

Larry Yetter, a driver for Belanger Septic Service, unloads his truck at the Septage Treatment Facility in Traverse City on Friday.

Larry Yetter, a driver for Betner Sanitation, unloads his truck at the Septage Treatment Facility in Traverse City on Friday.

The Great Lakes State boasts more freshwater resources than any other state in the nation, yet has no statewide oversight to protect those waters from human fecal contamination that escapes faulty septic systems.

Most urban and suburban Michigan residents benefit from sanitary sewers that operate highly regulated wastewater treatment plants designed to ensure dangerous human bacteria and nutrients are stripped out of wastewater before it returns to the environment. Both state and federal regulations must be met.

But that’s not the case for Michigan’s approximately 1.3 million septic systems, of which an estimated 130,000 to 300,000 are failing. Only a smattering of townships and counties require septic tanks and drain fields be inspected after installation, and then only when property is sold or transferred.

“Point-of-sale is imperfect and the reason is it doesn’t capture everyone’s septic on a regular basis,” said Liz Kirkwood, executive director of Traverse City-based For Love of Water nonprofit environmental organization.

Concerns about fecal contamination in both groundwater and surface water include risks to human health — from E. coli, salmonella, norovirus and other pathogens and microbes — as well as environmental degradation, such as excess nutrients dumped into waters that can lead to harmful algal blooms.

Properly maintained septic systems prevent those risks and most septic tanks should be pumped out every 3 to 5 years, said Eric Johnston, environmental health director for the Benzie-Leelanau District Health Department. That agency inspects septic systems in Benzie and parts of Leelanau counties.

Inspections provide both property owners and potential buyers the straight poop about the status of septic systems, he said, and whether it properly functions or instead leaks raw sewage into the ground to contaminate water both on site and beyond.

“Septic waste does not stay on your property. It does not care about property lines,” Johnston said.

There are nine counties in Michigan with point-of-sale inspection requirements for both septic and water wells, including Benzie, Kalkaska and Manistee counties.

Two counties — Barry and Eaton — repealed the rule in 2017, while Kalkaska County commissioners are attempting to do the same now.

Wayne County requires only septic inspections, not for water wells.

Additionally, five townships and one village require both inspections at the time of sale, nearly all in the northwest corner of Lower Michigan: Cleveland, Empire and Glen Arbor townships in Leelanau County; Milton Township and Elk Rapids Village in Antrim County; and Secord Township near Gladwin.

But McBrearty said point-of-sale inspections often miss the worst offenders — often old homesteads passed down through generations. His organization advocates for a statewide sanitary code that requires inspections as often as every 5 years for all septic systems, he said.

“It’s a public health issue and it’s an environmental issue,” McBrearty said. “We know we have a problem and we need to address it.”

In recent years, the creation of a statewide sanitary code for Michigan has repeatedly appeared on the legislative agenda in Lansing. Most recently, two bills were introduced in 2018 but faced opposition and died during the lame duck session at year’s end.

McBrearty said that doesn’t scare the issue out of him. This is a duty Michiganders deserve from their legislators, he said.

“There is a lot of public will to get things done and protect health and environmental quality,” he said. “Nobody knows the full extent of this problem because we haven’t looked at it.”

State environmental officials are working to better identify where sewage contamination comes from when it occurs, said Molly Rippke, aquatic biologist specialist with the Michigan Department of Environment, Great Lakes and Energy. She works on source-tracking E. coli from fecal contamination.

“It’s a risk to have raw sewage going into surface water,” Rippke said.

In fact, she said it’s estimated as many as 5 percent of homes in Michigan have illicit sewage dumps directly into surface water like ponds, lakes or streams.

Rippke said remedies for this type of harmful water contamination can be found if scientists are able to pinpoint whether the fecal source is human, agricultural or from wildlife.

It’s a new and evolving scientific field, she said.

In fact, Rippke is scheduled to speak Friday about sewage source-tracking projects across Michigan during the 12th annual Freshwater Summit in Traverse City.

“We thought it would help those efforts to have her talk about what is happening and being found around the state,” said Christine Crissman, the center’s executive director.

Additionally, McBrearty, Kirkwood and Johnston are all scheduled to speak at the coming Michigan Septic Summit on Nov. 6 in Traverse City.

In the meantime, Kalkaska County residents await a decision by Manistee County commissioners, who because of the way district health departments function have what amounts to the final say on whether Kalkaska County can dump its septic inspections outright.

The debate in Kalkaska County has continued for months about whether to continue or rescind the currently required point-of-sale inspections.

“Some wished to have us stay and others who do not. It’s as split up and diversified as the people of Kalkaska County,” said Kohn Fisher, Kalkaska County Board chairman, adding he doesn’t see the program’s public value.

He’s not alone in his criticisms.

Commissioner Craig Crambell said the regulation is a big imposition on a lot of people “to benefit a few,” while commissioner John West said he prefers township officials impose such rules because they better know their communities.

Seth Phillips, Kalkaska County resident and county drain commissioner, said that’s all nonsense and it was a few people with vested financial interests who spurred this action in Kalkaska County despite the outcry of hundreds of public comments that encouraged the contrary.

“I’m disappointed the voices of a few in the real estate industry will carry the issue,” he said.

Some Kalkaska-area realtors criticized the inspection rule as inefficient because of ample exemptions, as well as frequently problematic for property sale closing schedules. Others said they would work collaboratively to improve the regulation.

Now the Manistee County Board is the last among the 10 within Health Department District No. 10 to vote on Kalkaska County’s request to withdraw from the policy. Without its approval, officials in Kalkaska County will be stuck with the regulations adopted nearly a dozen years ago.

Jeff Dontz, chairman of Manistee County’s board, said commissioners there will again take up Kalkaska County’s request at their Tuesday meeting.

Phillips said he will travel to Manistee that morning to “bang the drum” and encourage Manistee County commissioners to vote to force Kalkaska County to maintain the inspection regulation.

MANISTEE — The debate about septic and water well inspections is destined to linger in Kalkaska County.