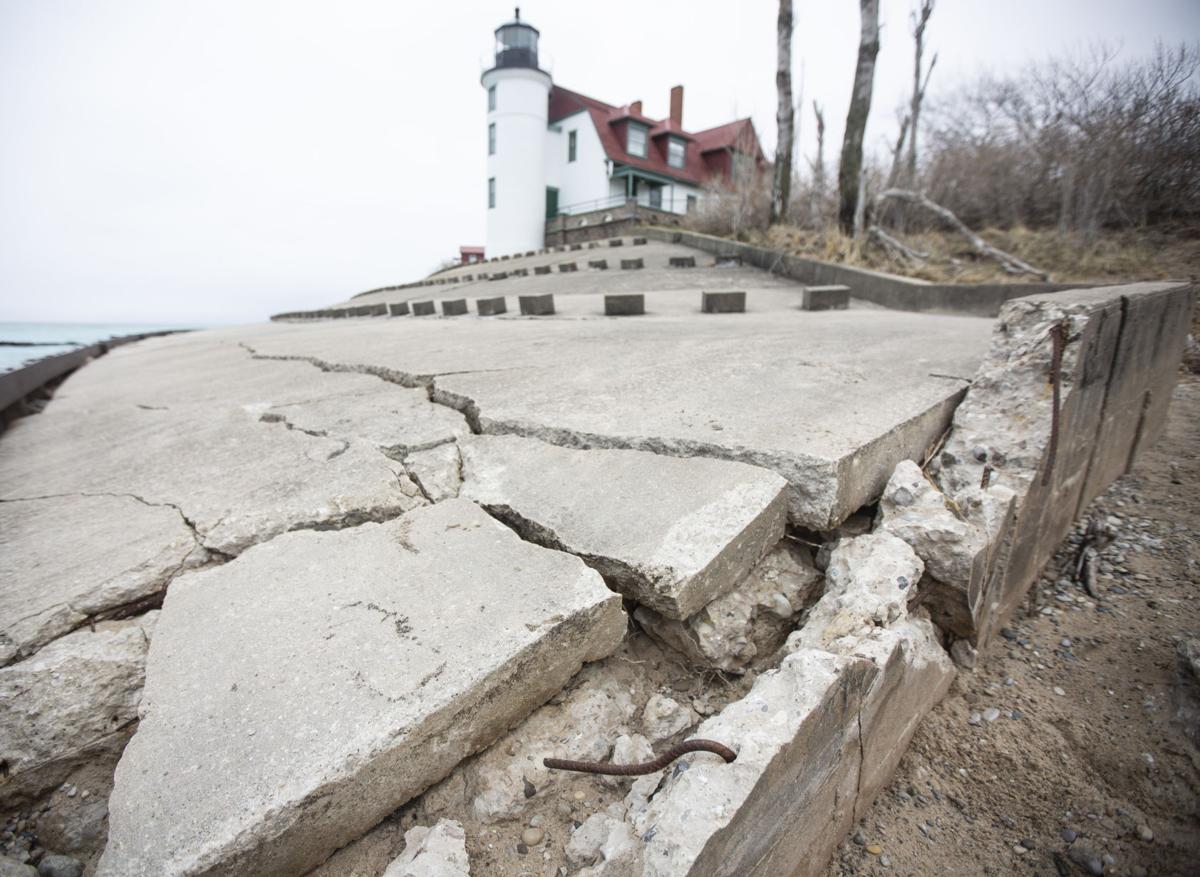 A concrete pad at the base of Point Betsie Lighthouse in Frankfort has been damaged by waves. 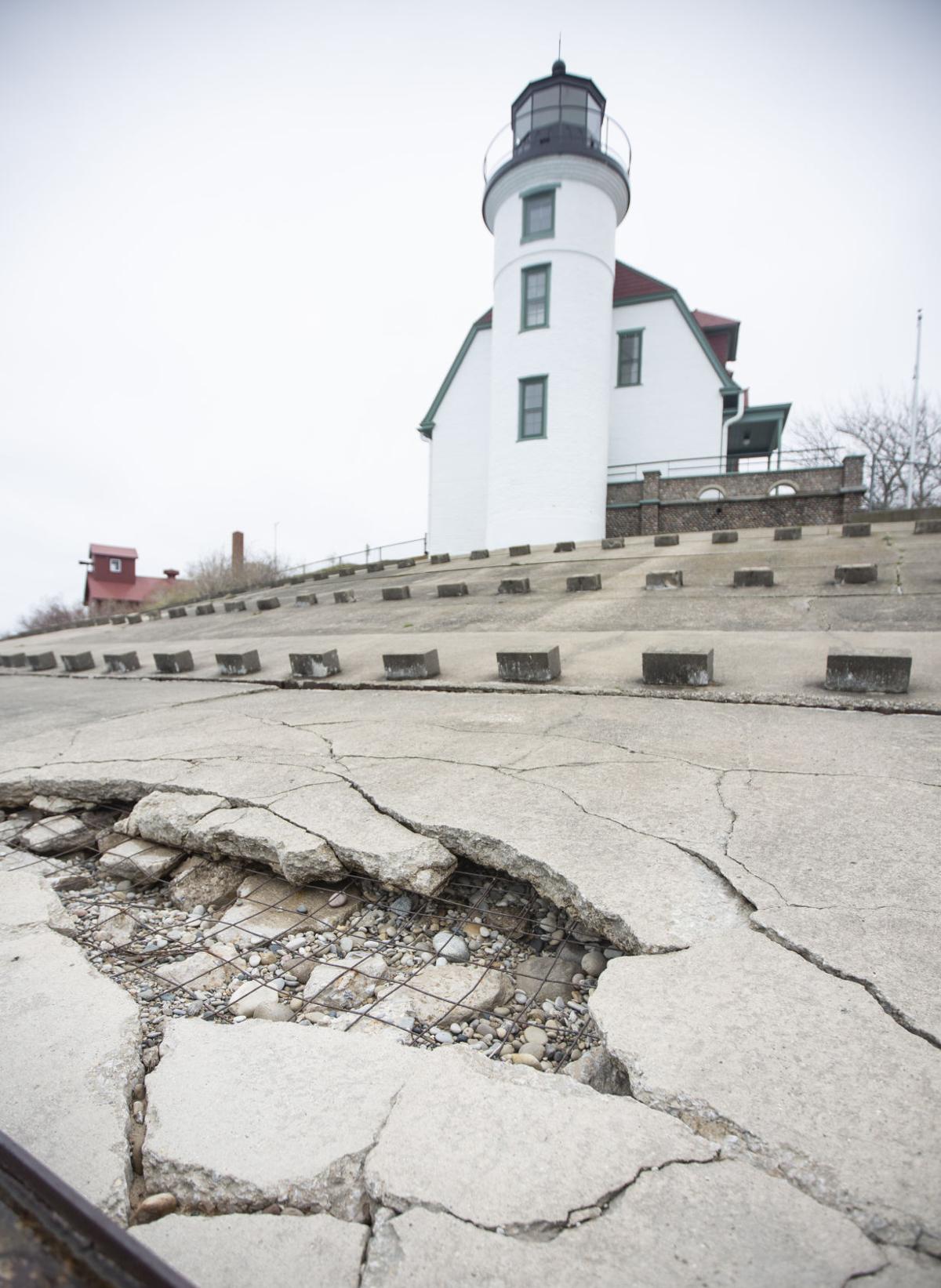 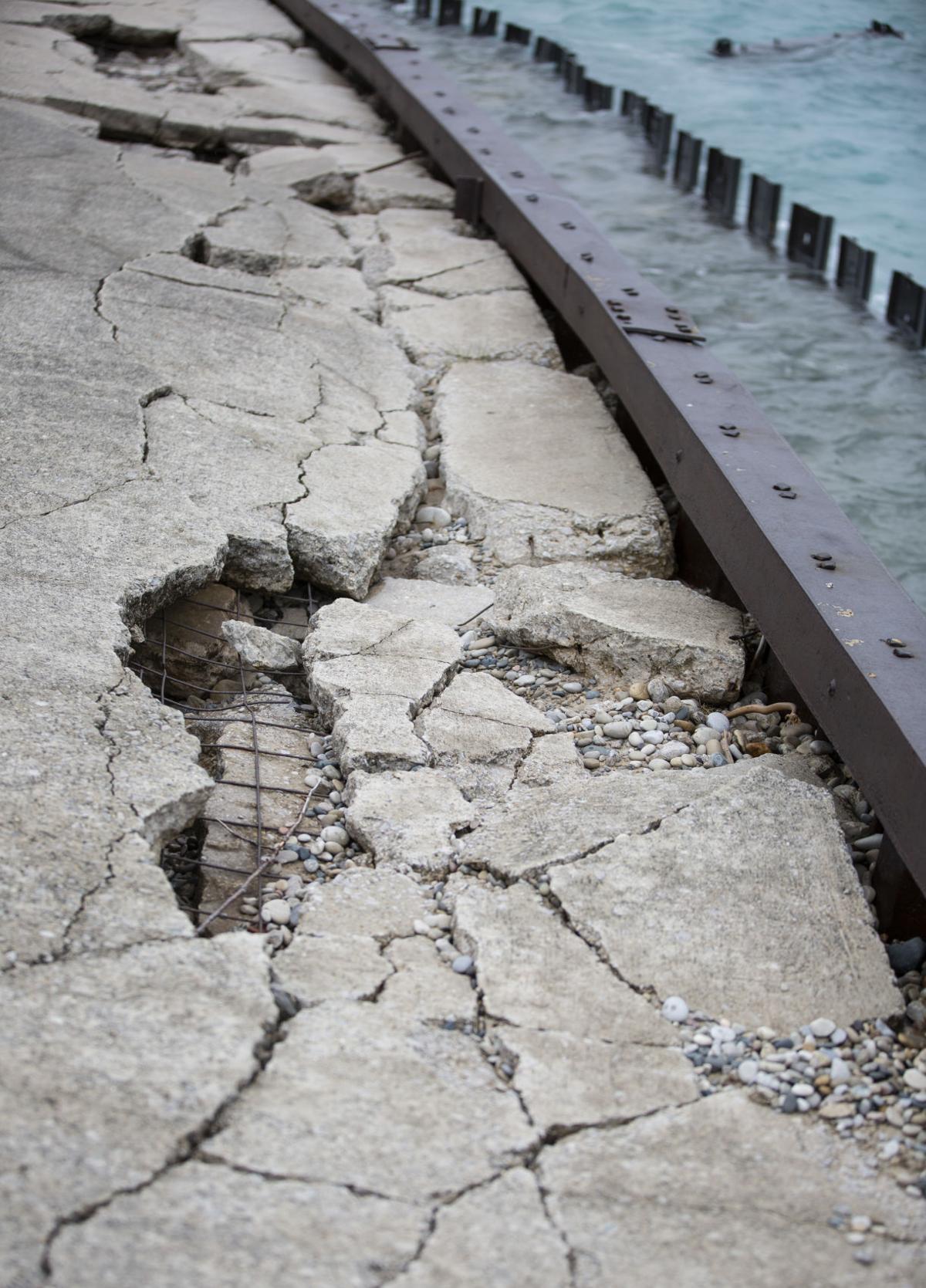 Concrete is damaged by waves at the Point Betsie Lighthouse in Frankfort. 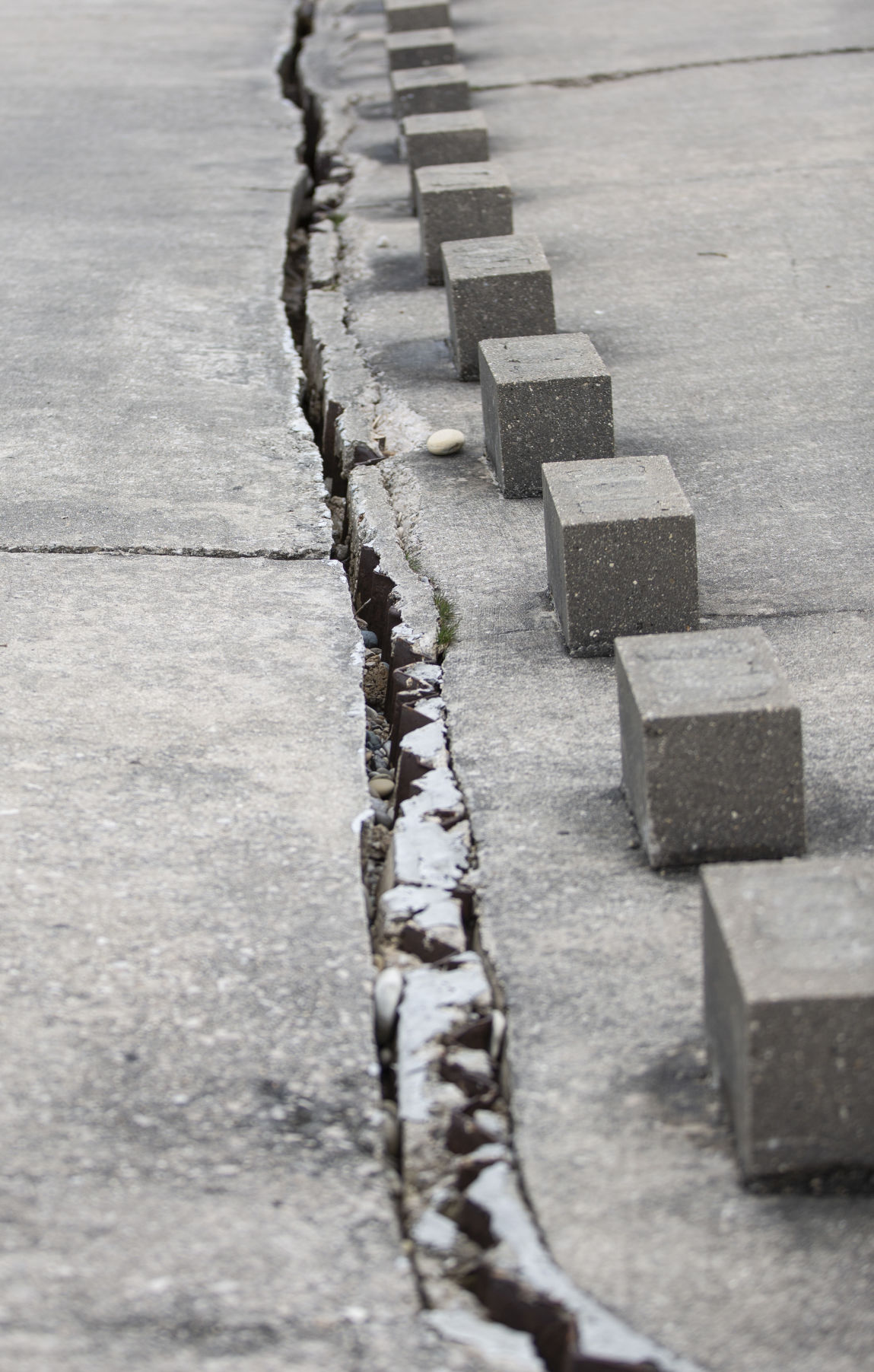 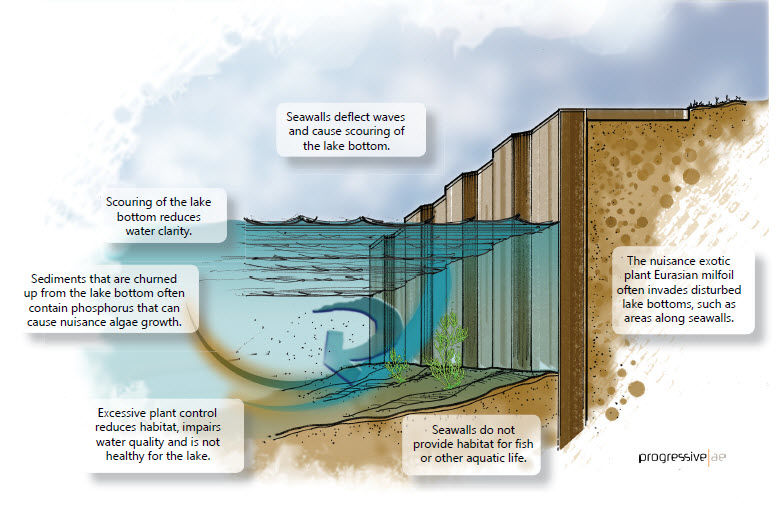 Nonprofit Tip of the Mitt Watershed Council provided this graphic that shows the impacts seawalls have on the Great Lakes.

A concrete pad at the base of Point Betsie Lighthouse in Frankfort has been damaged by waves.

Concrete is damaged by waves at the Point Betsie Lighthouse in Frankfort.

Nonprofit Tip of the Mitt Watershed Council provided this graphic that shows the impacts seawalls have on the Great Lakes.

TRAVERSE CITY — Great Lakes water levels are shattering high records and the experts agree there is rather little that can be done to change that — the environment is almost entirely in control.

A series of experts in hydrology, engineering, shoreline protection, emergency management and environmental law spent hours this week talking and answering questions during online webinars about the ongoing high water levels on the Great Lakes. Both nonprofits Tip of the Mitt Watershed Council in Petoskey and Great Lakes Coalition in Saugatuck hosted the online events Thursday and Friday, respectively.

The consensus among the experts was the natural environment is far more in control than humans could ever hope to be, and the best way to cope may well be to simply back up from the water’s edge.

Countless homeowners along the shorelines of the Great Lakes have watched the water get closer and closer, and the water gobble up more land with every storm. Many are left wondering how to protect their homes from literally splashing into the rising waters.

Jennifer McKay, policy director with the Petoskey-based agency, said that ultimately, it is often more cost-effective and environmentally sound for shoreline property owners to move their homes further away from the water. It can be done for between $12 and $16 per square foot, she said.

However, many shoreline homeowners instead try to hold back the big lakes and their effects.

“We see excessive or poorly designed structures that can increase damage to neighboring properties and disrupt natural processes along the shoreline,” McKay said.

She said those methods are no good for water quality or aquatic habitats, either.

In terms of money, McKay said some property owners may in the end invest more in repeated shoreline measures than if they’d instead moved their home back from the water’s edge, which she said can also be a better long-term environmental solution.

Joe Haas, water resources division district manager for the Michigan Department of Environment, Great Lakes and Energy, said the state agency doesn’t like to permit seawalls — they are typically even frowned upon.

He confirmed attempts to “hard armor” the shoreline often end up with accentuated erosion on neighboring properties and water getting behind the structure, anyway.

Other experts discussed what additional things could be done to affect water levels.

“We need to recognize climate change realities,” he said, adding better land use planning must be done based on that.

Gigas, a New York-based engineer who said he lives on the Lake Ontario shoreline, said there are only four places within the entire Great Lakes system where humans have any control over inflow or outflow rates.

The Soo Locks serve as an inter-lake control, Gigas said.

“No one controls the weather. Soo Locks and Moses-Saunders Dam have influence but not complete control of water levels,” he said.

Actions the engineer said are reasonable and could help alleviate extremely high water levels include reducing or eliminating Lake Superior inflow diversions — like the Ogoki and Longlac — during high water periods, plus increasing the outflow from Lake Michigan through the Chicago River.

Gigas also said infrastructure changes could be made to increase the capacity of the St. Clair and Detroit Rivers, as well as the Niagara River. But that would have flooding impacts downstream and could also prove problematic during low water level years, he said.

And really, he said all that would have marginal impacts, as weather patterns have greater influence on the lakes’ levels.

“There is only so much we can do,” Gigas said. “We don’t control the weather.”

Maybe it’s time to recognize the risk property owners who built too close the shoreline took when they chose where to live — including himself, the engineer said.

Learner said much of western Michigan along the Lake Michigan shoreline wasn’t developed with current water levels in mind, which is why many homeowners there are fraught over the ongoing erosion.

He said it’s time to rethink how building is allowed in these places and not only in terms of residential neighborhoods; Learner pointed to multiple toxic and nuclear waste storage sites along the Lake Michigan shoreline that could become public health threats in the face of continued high water levels.

She said those lakes — considered one water body by federal hydrologists — are tracking toward continued broken high water level records at least through July, when the peak is expected before the normal seasonal decline.

Both webinars are expected to be posted at www.watershedcouncil.org and www.greatlakescoalition.org online.