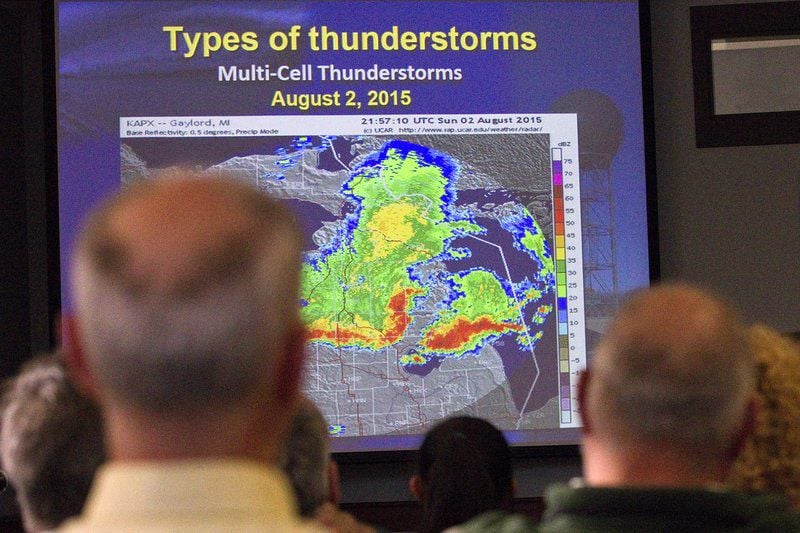 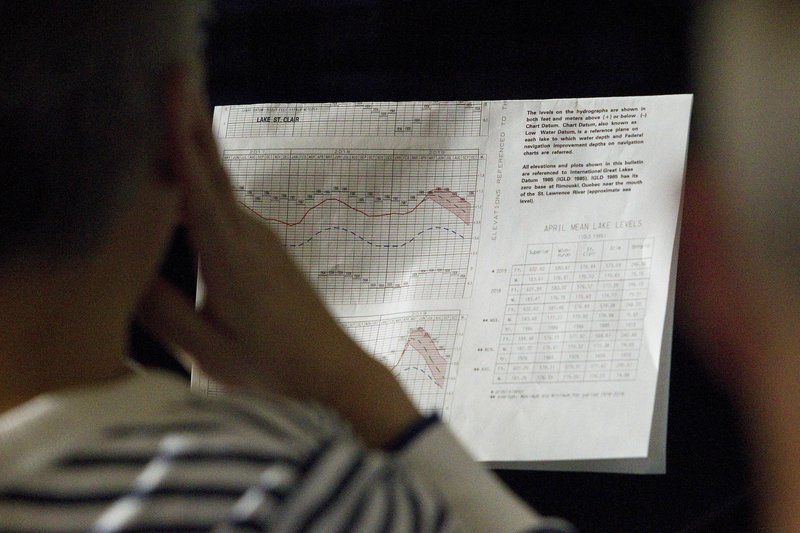 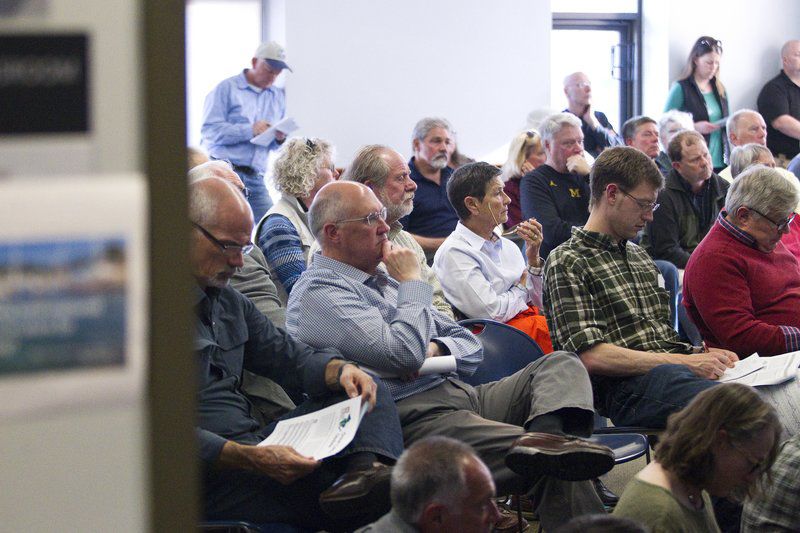 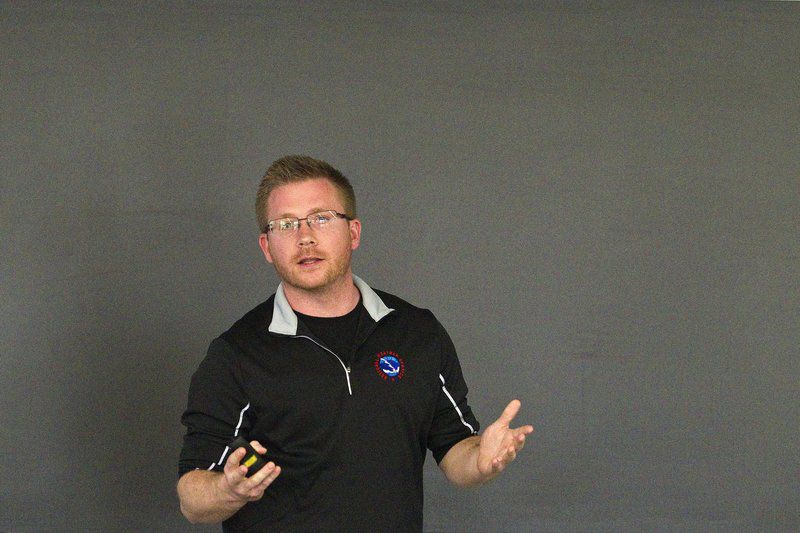 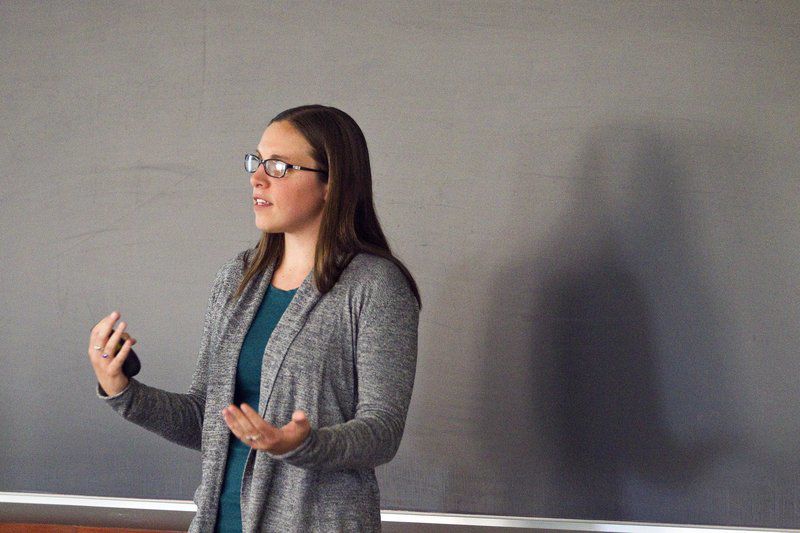 TRAVERSE CITY — Just how high the water will go is a scientific question which many who live in the Great Lakes region are focused on this year, including Bill Bantle who lives on West Grand Traverse Bay in Suttons Bay.

Bantle asked scientific experts during a Wednesday informational session whether area residents should expect the increasing Lake Michigan water levels recorded in the last couple of years to continue, given the last stretch of low levels endured more than a dozen years.

He was told to be prepared for variability.

Federal officials predict extremely high water this spring and summer, a continuation of the last two years of levels above long-term averages. That will mean a higher water line on all Great Lakes beaches, a key issue for the region's lakeside residents — proven by the nearly 80 people who crammed into a standing-room only space to learn more at Northwestern Michigan College's Great Lakes Campus.

Officials from both the U.S. Army Corps of Engineers and the National Weather Service were invited to speak at an event presented by the Traverse City-based Michigan Sea Grant Extension.

High enough water levels are expected to break records — set in the early 1950s and the mid-1980s — on Lakes Superior, St. Clair and Erie, and rise on Lakes Michigan, Huron and Ontario.

Lead forecaster Lauren Fry and physical scientist Deanna Apps, both of the Corps' Great Lakes Hydraulics and Hydrology office in Detroit, spoke about long-term patterns in water levels and what affects the lakes' total net volume — the "net basin supply" — daily, monthly and seasonal fluctuations, and other factors which influence changes.

"It's really cool that we have 100 years of data to look at," Fry said, since that's not always the case with environmental statistics.

Net water volumes in the Great Lakes are affected by inflow from upstream water bodies, precipitation and watershed runoff, as well as evaporation rates and outflow into downstream lakes.

Fry said Lake Superior has experienced six consecutive years of above average net volumes, while Apps pointed out levels measured there this week are already above the record mean level for May set in 1986.

For Lakes Michigan and Huron — the same horseshoe-shaped lake, hydrologically speaking — the mean monthly water levels can be expected to rise another three or four inches by mid-June and eventually peak in July, both Fry and Apps agreed.

Elevated water levels may result in more opportunities for meteorological events such as seiches and meteotsunamis, said Matt Gillen, meteorologist at the National Weather Service station in Gaylord.

Seiches and meteotsunamis are phenomenon that can result in temporary shoreline flooding.

Gillen said meteotsunamis are not triggered by seismic activity like tsunamis, but instead are progressive waves caused by air pressure disturbances often associated with fast-moving thunderstorms. They are more common during summer months, he said, while seiches happen more in autumn.

Seiches are caused by strong, sustained winds or rapid changes in atmospheric pressure, effectively pushing water from one end of a water body to another. It's comparable to water sloshing back-and-forth in a bathtub, Gillen said.

Extremely high water levels reported May 6 in Leland's FishTown probably was a seiche, Gillen said, after an audience member reported the water levels oscillated up and down nearly a dozen times over a period of time.

LELAND — Nels Carlson, owner of Carlson’s Fishery in Fishtown, was working last week when a …