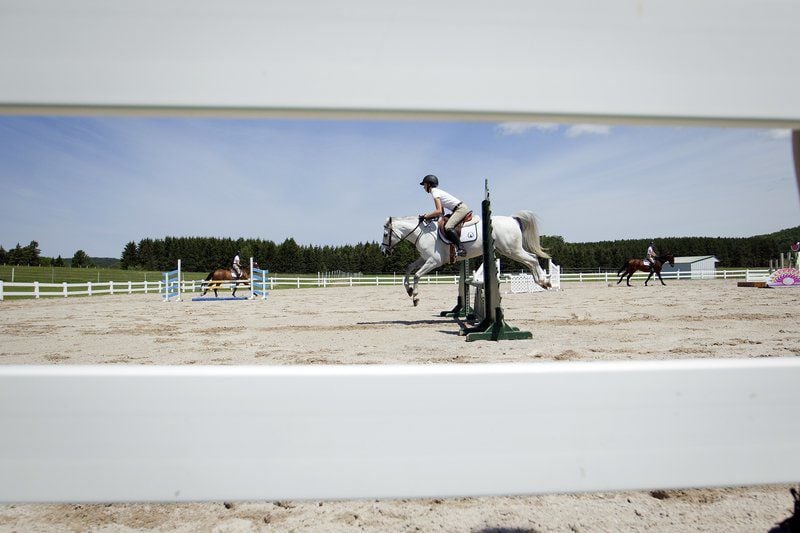 Aristea Santoro and Illumination leap over a jump a riding at Northern Pines Farm near Maple City. 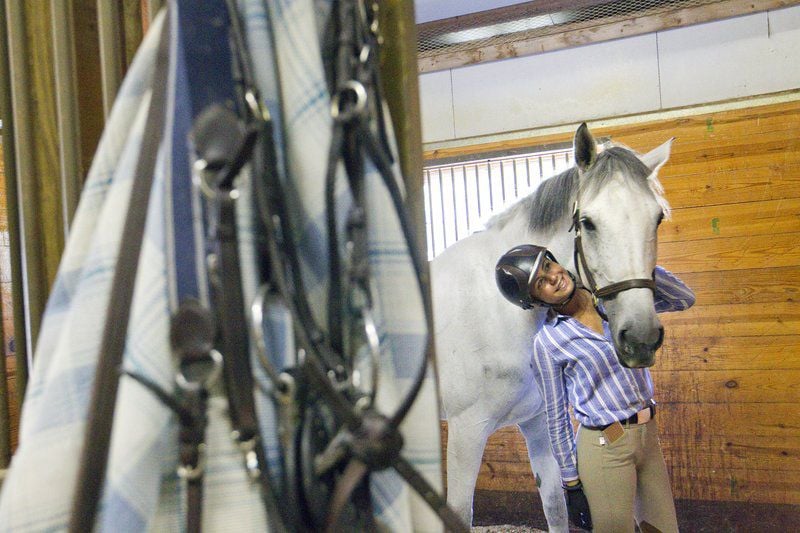 Record-Eagle/Jan-Michael StumpMackenzie Snider, 16, has a moment with Questa Capriole after riding at Northern Pines Farm near Maple City. 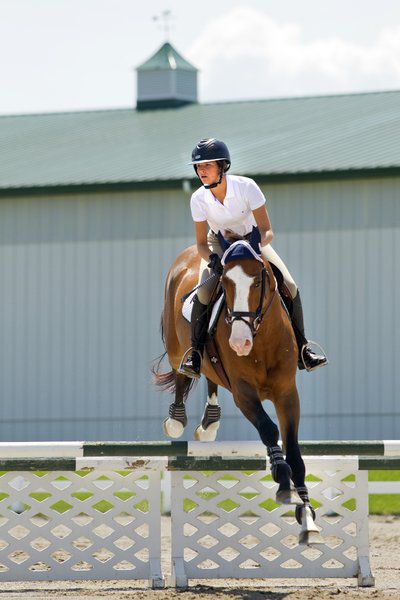 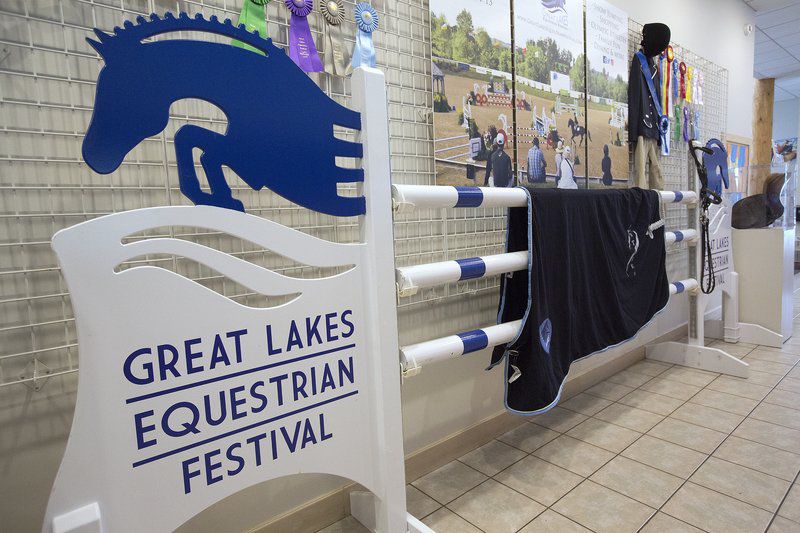 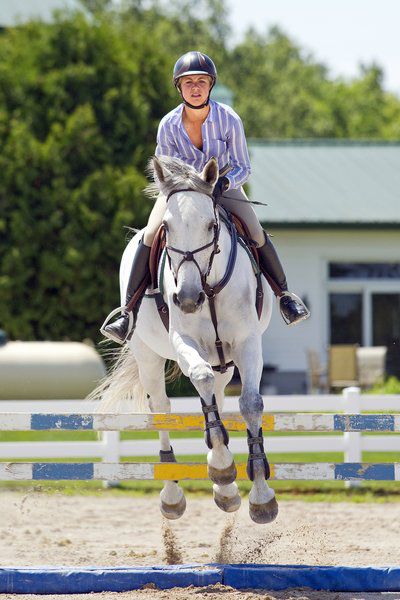 Mackenzie Snider, 16, and Questa Capriole leap over a jump while riding at Northern Pines Farm near Maple City.

Aristea Santoro and Illumination leap over a jump a riding at Northern Pines Farm near Maple City.

Record-Eagle/Jan-Michael StumpMackenzie Snider, 16, has a moment with Questa Capriole after riding at Northern Pines Farm near Maple City.

Mackenzie Snider, 16, and Questa Capriole leap over a jump while riding at Northern Pines Farm near Maple City.

TRAVERSE CITY — If there was any doubt that the Traverse City area is moving up in the equestrian world, a June-July story in Equestrian Living magazine puts it to rest.

The four-page spread calls the area and its Great Lakes Equestrian Festival an “equestrian summer oasis.” Readers also nominated the festival and its host for inclusion in the magazine's 2017 "Gold List" issue, featuring the best in equestrian life.

“This is like a European horse show: seriously well run, well thought out, big classes, serious prize money,” said equestrian Penelope Straight, of Palm Beach, Florida. “It’s the whole package. There are a lot of well-run horse shows but when you throw in the activities, the town and the lake and the weather, you think you’re showing somewhere in Europe when you go."

Straight, whose Pen Oak Farm sells high-end hunter-jumpers, is among hundreds of horses and riders who attend the annual equestrian festival at Flintfields Horse Park in Williamsburg. The three-year-old show attracts equestrian athletes from across the country and around the world to participate in nationally and internationally rated hunter-jumper competitions.

“The fact that it’s an FEI show for five weeks makes a big difference,” said Flintfields Owner Karin Flint, noting that competition rated by both the United States Equestrian Foundation and the Fédération Equestre Internationale (FEI) means the festival can attract international and even Olympic-level riders, making it more attractive to both participants and spectators.

“I was amazed last year how many foreign riders we had,” said Robin Vilter of Maple City, who helps transport horses to the festival for riders from next-door neighbor Northern Pines Farm. “That was exciting to see, it brought an international presence to it.”

This year’s Great Lakes Equestrian Festival opens July 5 with six weeks of world-class hunter and jumper competition for a total of $1.3 million in prize money. The action takes place in five competition rings on 88 park-like acres landscaped with flowers and equestrian sculpture.

New to the event is improved hunter and warm-up ring footing, a grass ring and “Equitation Tuesdays.” Flint said the grass ring has been several years in the making and features mostly Kentucky bluegrass, known for its strong roots.

“People like to jump on grass,” she said. “Originally hunter-jumper competition was on grass, but grass can get slippery, it wears and tears just like divots on a golf course. We’ve been nursing this field for about seven years for the roots to get strong enough to take the horses’ jumping.”

The festival is open to the public Wednesdays through Saturdays without an admission charge and Sundays for a fee. "Sunday Fundays” feature shopping, dining and family fun, as well as high-stakes grand prix show jumping action beginning at 2 p.m.

Mackenzie Snider has competed at the festival and its predecessor, Horse Shows by the Bay, since she was 5. This summer the junior rider hopes to compete in her first grand prix there with her Dutch Warmblood mare, Questa Cabriole.

“If I do one, there’s a good chance I would compete against international riders,” said Snider, 16, who rides with Northern Pines Farm. “I’m looking for riders from the Olympic Games to come since it isn’t an Olympic year.”

The festival’s wide range of classes make it popular with equestrians of all levels. Officials market it as “the perfection combination of exciting equestrian competition and great family fun” and wind down competition early each day so exhibitors — many of whom treat the festival as a family vacation — can enjoy what the area has to offer. This year the festival is even giving away tickets to the Cole Swindell concert at the National Cherry Festival.

Flint estimates that the festival contributes more than $20 million to the local economy.

“It’s six weeks so they live here for all that time,” she said. “They do a lot of things. They dine here, they go to movies here, they do their cleaning here, they go to Interlochen here. Some rent houses and cottages. They really set up for a month. They take part in this community.”

The festival is organized by Morrissey Management Group of Bradenton, Florida, which puts on several of the country’s most prestigious equestrian events. They include the American Gold Cup, the National Horse Show and the Longines Global Champions Tour.

General admission tickets for Sundays are $15 for adults and $10 for seniors and children 12 and under at mynorthtickets.com. Tickets also are available for the USHJA International Hunter Derby starting at 3 p.m. July 29.

Gates are open from 9 a.m. to 5 p.m. Wednesday-Saturday and at noon on Sunday and Hunter Derby Saturday.