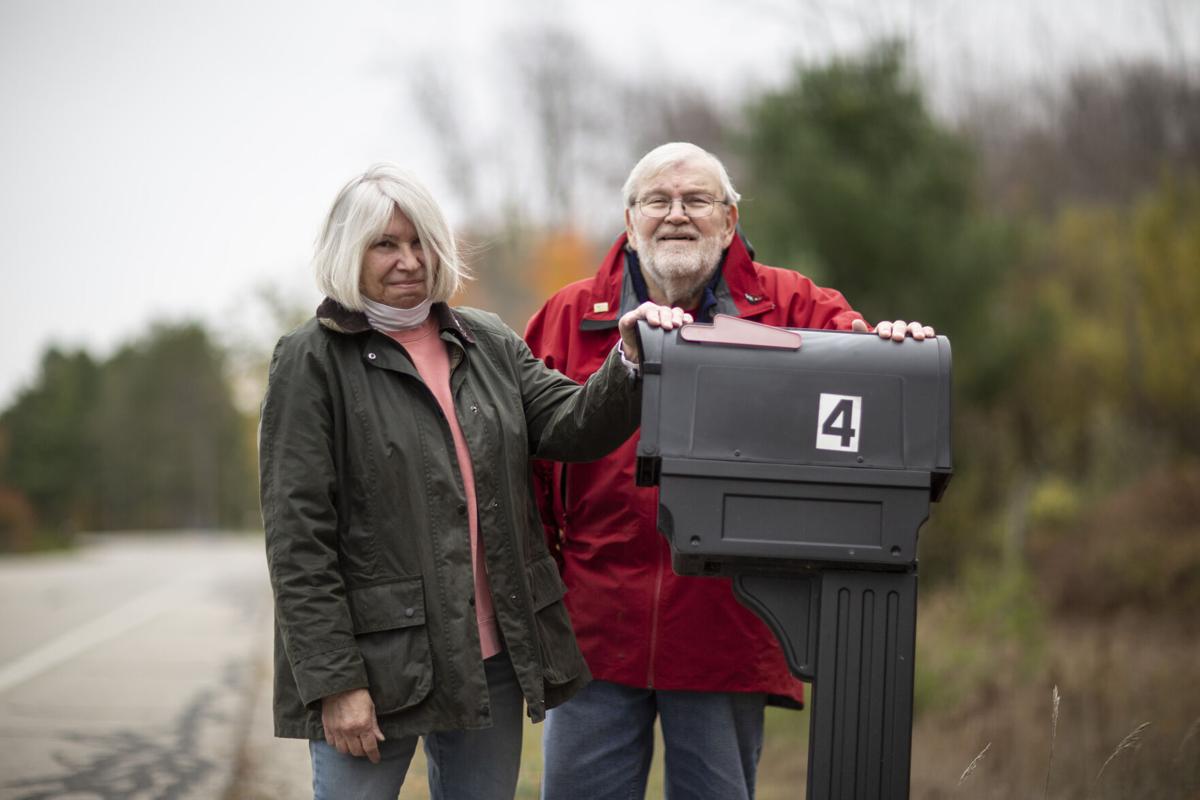 Jackie and Barry Olshin pose for a portrait at their home in Beulah on Thursday. The couple mailed their absentee ballots several weeks ago, which were returned to their mailbox a few days later. 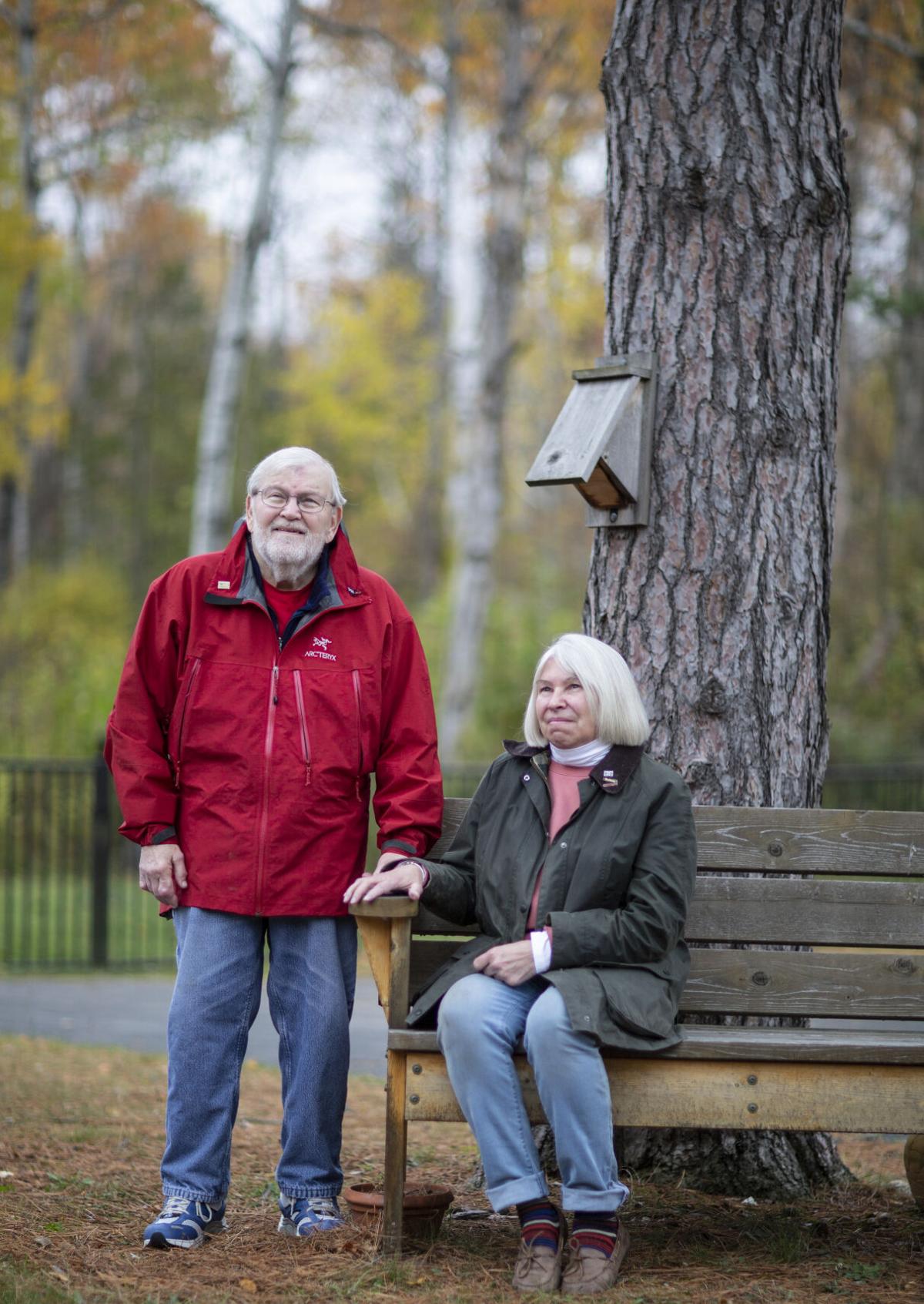 Barry and Jackie Olshin pose for a portrait at their home in Beulah on Thursday. The couple mailed their absentee ballots several weeks ago, which were returned to their mailbox a few days later.

Jackie and Barry Olshin pose for a portrait at their home in Beulah on Thursday. The couple mailed their absentee ballots several weeks ago, which were returned to their mailbox a few days later.

Barry and Jackie Olshin pose for a portrait at their home in Beulah on Thursday. The couple mailed their absentee ballots several weeks ago, which were returned to their mailbox a few days later.

BENZONIA — Benzonia Township residents Barry and Jacqueline Olshin were a little surprised when the absentee ballots they mailed out several weeks ago found their way back into their mailbox a couple days later.

A couple weeks later the same thing happened to Jacqueline’s 101-year-old mother, who lives at the Homesteader assisted living facility in Benzonia.

Barry Olshin originally thought their ballots being returned was an attempt at voter suppression, but after contacting the Michigan Bureau of Elections he was given an explanation for the problem.

According to an email he received from Charamy Cleary, an election specialist with the bureau, the return envelopes the couple got with their ballots was missing a facing identification mark (FIM) in the upper right hand corner next to where the stamp goes that tells the sorting machine which side of the envelope is the front so it can be postmarked.

With the FIM missing, the machine read the side of the envelope that contained their home address, resulting in the ballots being sent back to them.

“I do not believe this is voter suppression but a poorly desig- ned envelope,” Cleary wrote. Cleary did not return calls to the Record-Eagle.

Amid fears of ballots being delayed by a scaled-back U.S. Postal Service and not being counted, the Michigan Secretary of State and local clerks are telling people they should no longer mail their ballots back as it’s too late to guarantee they’ll make it in time to be counted.

In August a mail-sorting machine was removed from the Traverse City mail processing and distribution facility on Garfield Road, according to data from the Washington Post. The postal service was set to decommission more than 600 machines nationwide, but after a public outcry over delays in mail delivery and the possible effect on mail-in voting, the plan was put on hold until after the election.

Statewide, there were still 1.5 million absentee ballots that had not been sent back as of Tuesday, according to Michigan election officials, prompting them to tell voters not to risk putting them in the mail, but instead put them in a drop box or hand deliver them to their township office.

That will ensure that the ballots arrive by 8 p.m. on Election Day and will be counted, officials said.

A September ruling by the Michigan Court of Claims that said that ballots coming in after election day must be counted if they are postmarked by Nov. 2 was overturned Oct. 16 by the state Court of Appeals.

At this point no ballots should be mailed, said Bonnie Scheele, Grand Traverse County clerk.

“We’re only two weeks out,” Scheele said. “We don’t want anything lost in the mail.”

As of Wednesday 65,339 absentee ballots had been sent out across the five-county Grand Traverse region, with 43,570 — about 67 percent — returned either by mail, in person or via drop box.

In Grand Traverse County 23,156 have been returned, or about 64 percent of the number sent out, Scheele said, adding that it’s a very good turnout.

Drop boxes have been used in several states for many years, but have been expanded this year because of people’s fears of in-person voting because of the pandemic and worries that their mailed ballot will be delivered too late to be counted.

But Scheele said lots of voters from the various townships are putting their ballots in the drop box meant for Traverse City voters located in front of the Grand Traverse Governmental Center.

“People are confused and think there’s a main drop box at the county, but that’s the city’s drop box,” she said. “I don’t want any of these ballots not to get there on time.”

Township ballots that are not mailed must be returned to the voter’s township clerk or placed in their township’s drop box, she said.

The ballots are collected every day and the ones not belonging to the city are given to Scheele’s office to deliver back to the townships. Scheele said there are anywhere from two to 10 errant ballots found in the box every day.

Since the beginning of this election cycle, Benzonia Township Clerk Diane Heller has encouraged voters in her township to use drop boxes rather than the mail. The town is so small they can drop them off while running errands, she said. The Benzonia post office is also right across the street from the township office.

Olshin said he has been voting absentee for several years and has never had a problem. In past years post office employees have pulled mailed-in ballots and walked them across the street to the township offices. Now they are sent 24 miles to Traverse City and then another 24 miles back to Benzonia, something he calls “a tribute to inefficiency, if not stupidity.”

But this year that a national mandate from the USPS says all mail must be processed in the sorting facility, according to Cleary. The change is necessary for the USPS Informed Delivery program that lets people digitally preview their mail and packages, as well as for some of the ballot-tracking programs clerks are using, Cleary wrote.

Heller said she was not aware of the ballot envelope glitch until the Olshins shared their information on the missing FIM with her. She said she is not aware of anyone else having the problem.

Benzie County Clerk Dawn Olney, who lives in Benzonia Township, said her ballot was not missing the FIM.

“I think it was just an oddball thing that it just stuck together,” Heller said.

While the ballot itself is sent out for printing by the county, townships are responsible for printing the envelopes and other accessories, picking from a list of printing companies approved by the state.

Benzonia used Printing Systems Inc., a company in Taylor near Detroit that it has used before, Heller said, adding that the few faulty envelopes are not a reason to stop using the company.

Olshin said there should be some oversight by the state on the envelope printing, that it doesn’t make any sense that there isn’t.

“Given there are 1,223 townships in Michigan one can surmise that if each of these townships is given the authority to print their own ballots it must be an unholy mess,” Olshin said.

Scheele said the county is ready for the unprecedented number of absentee ballots coming in this election.

Garfield Township has had a high-speed tabulator that can count up to 100 ballots per minute for a while, Scheele said, but this year East Bay Township and Traverse City also have them.

Other townships have extra tabulators on hand and there is no shortage of trained poll workers as is being seen in some areas, Scheele said.

People can check to see if their ballot has been received by visiting the Michigan Voter Information Center and clicking on "your voter information." All ballots are tracked, whether mailed, placed in a drop box or given to their township clerk.