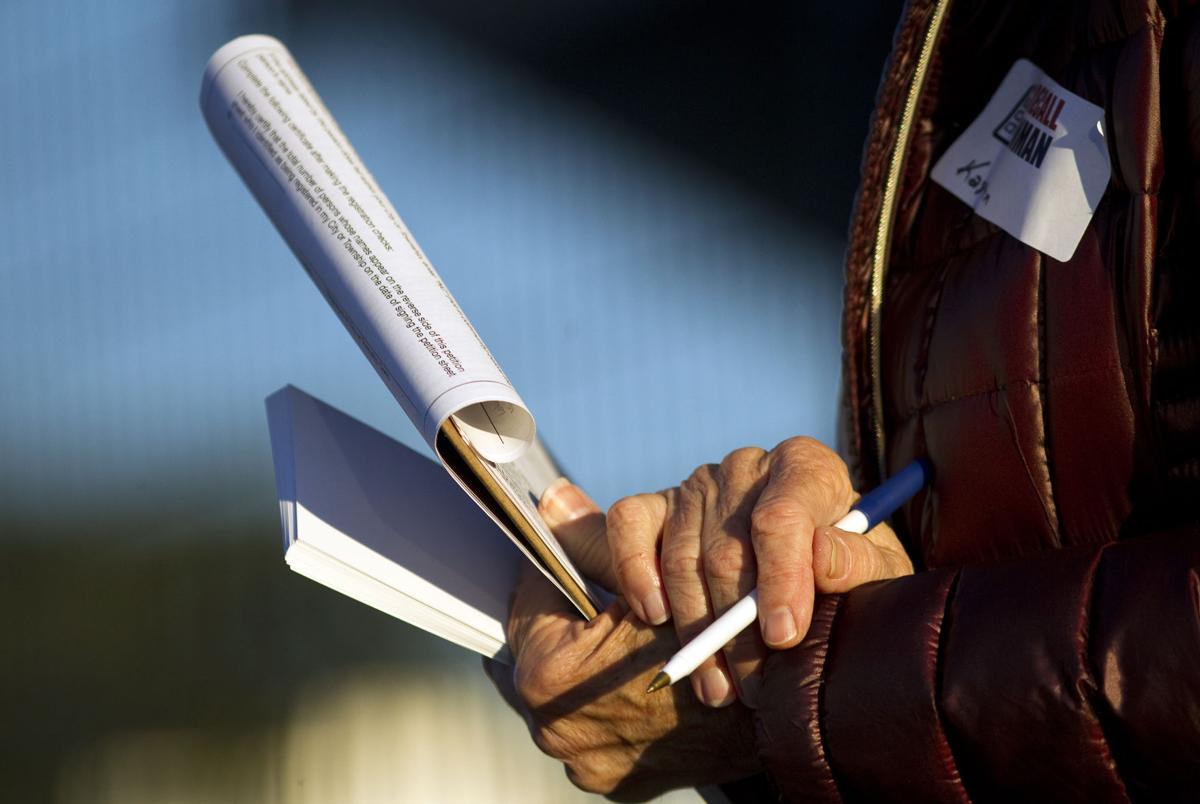 Kathleen Steeves gathers petition signatures with others in an effort to recall State Rep. Larry Inman outside Thirlby Field on Friday evening in Traverse City. 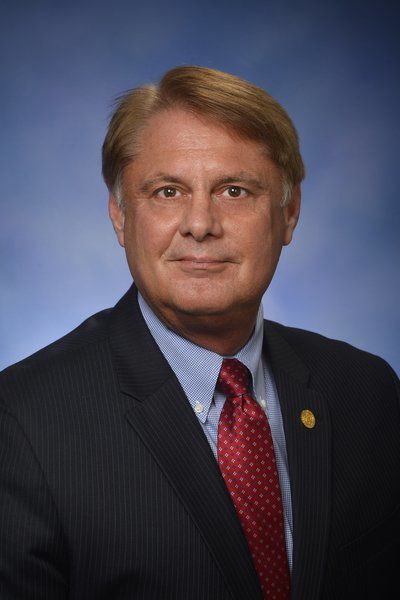 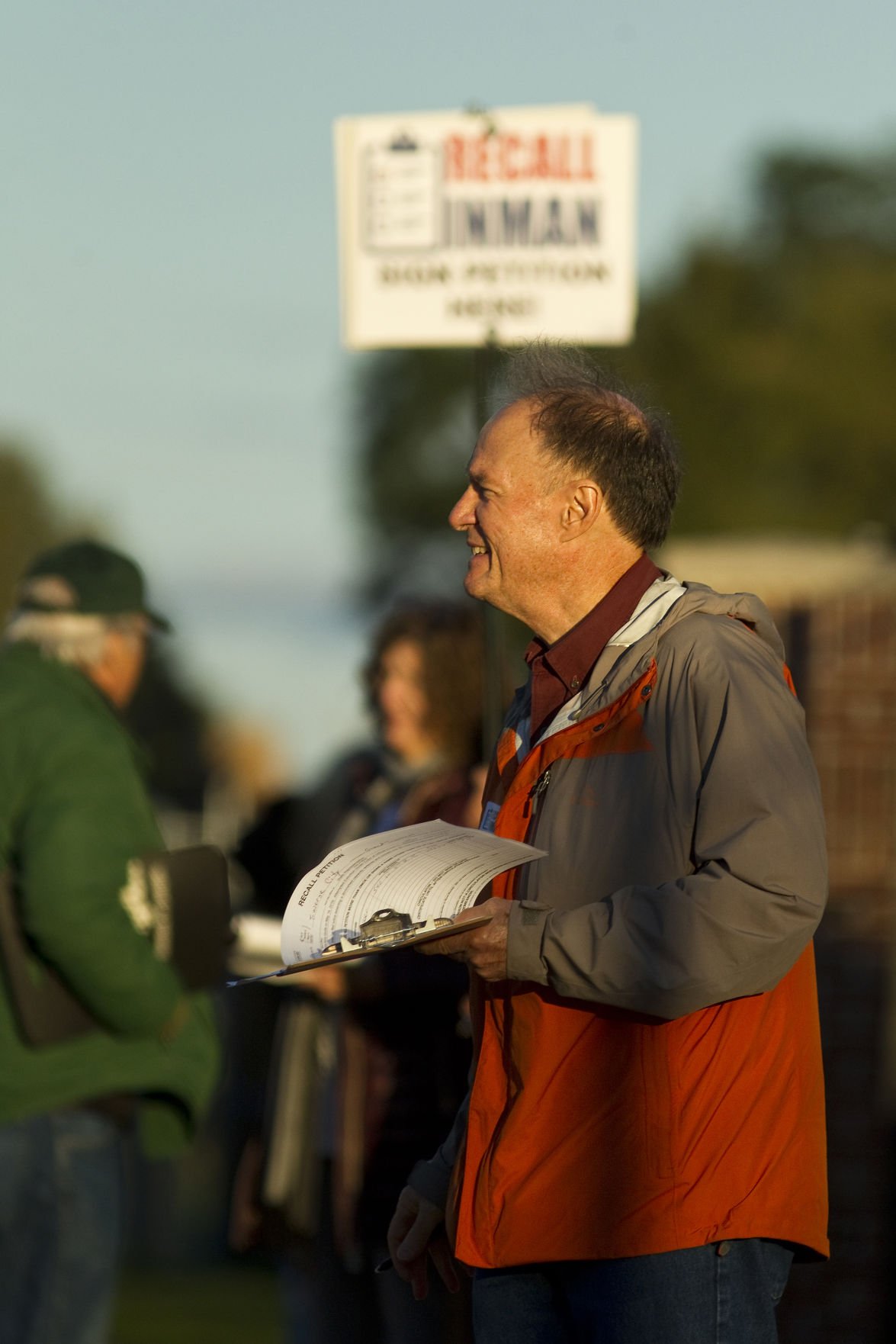 Fred Bimber gathers signatures with others on a petition to recall state Rep. Larry Inman outside Thirlby Field on Friday evening in Traverse City. 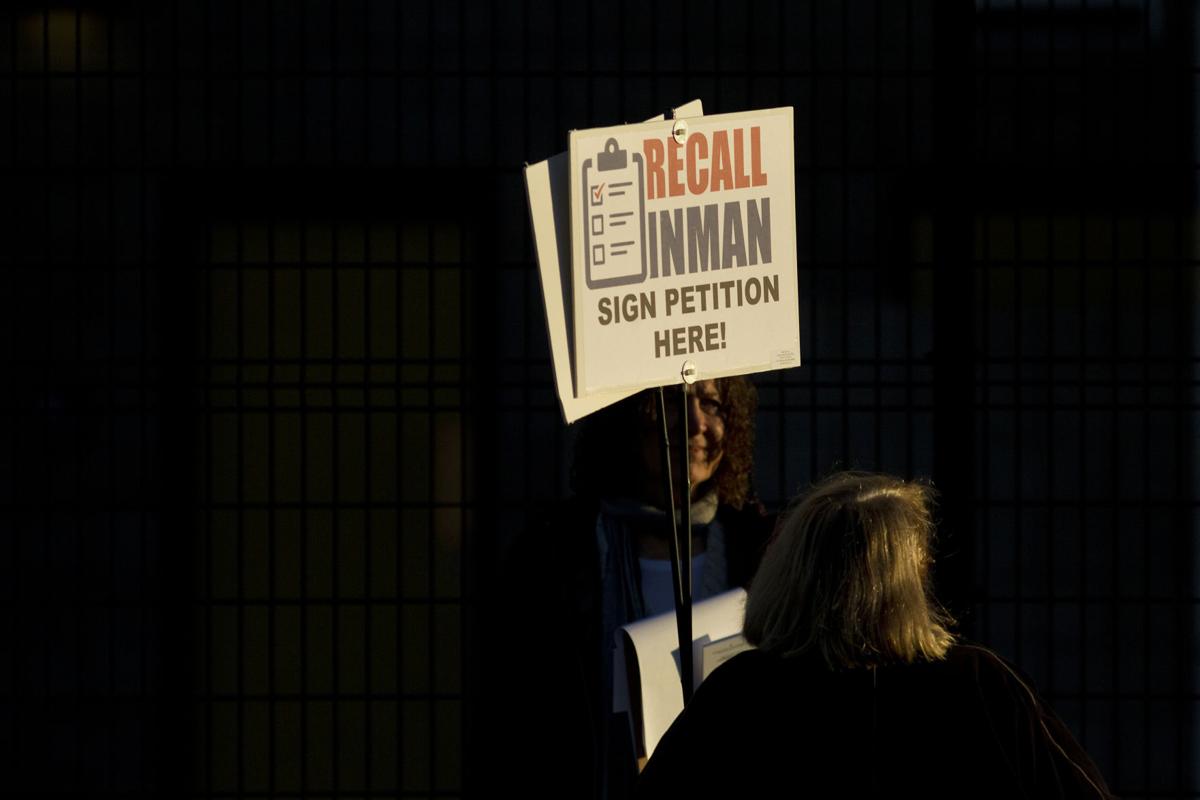 Kathleen Steeves gathers petition signatures with others in an effort to recall State Rep. Larry Inman outside Thirlby Field on Friday evening in Traverse City.

Fred Bimber gathers signatures with others on a petition to recall state Rep. Larry Inman outside Thirlby Field on Friday evening in Traverse City.

TRAVERSE CITY — Getting the necessary signatures to recall Larry Inman is now in full swing, but the attorney for the Republican representative is questioning the legality of the effort.

The Recall Inman campaign began gathering the 12,000-needed signatures Sept. 23, starting the clock on the 60 days the organization is allowed before turning the petition into the state’s Board of Canvassers. Kaitlin Flynn, chair of the campaign, said more than 50 volunteers brought in about a thousand signatures in the first week.

“We intended to start slow,” Flynn said. “I had projections on how many signatures a single volunteer could bring back after a shift, and right out from the start they’re exceeding those goals.”

A federal grand jury indicted Inman (R-104th) on three felony charges, including attempted extortion, bribery and lying to an FBI agent in May, that carry a maximum prison sentence of 20 years. Inman pleaded not guilty to those charges and cited diminished capacity because of an addiction to painkillers.

The recall effort has been underway since July 22 and asserts that Inman is no longer fit for office because of the criminal charges against him, his diminished capacity and missing more than 100 votes in the Michigan House of Representatives.

The Michigan House of Representatives called for the embattled representative to step down from his post, effective immediately, by a vote of 98-8 in late August, but both Inman and his attorney, Christopher Cooke, have said many times he has no intention of resigning. Flynn said she is not surprised by Inman’s resolute attitude to stay in office.

“That’s why we’re doing this,” she said. “We hoped that he would step aside and let someone else fill the seat, but he didn’t and he hasn’t. So we are exercising our right to recall him from office and make sure that we have someone in the state house who knows that serving us is a privilege and not a right.”

House Republicans barred Inman from using his office in Lansing and booted him from attending any Republican caucus meetings or voting on House matters.

Inman has since returned to the House floor after a 10-week treatment plan for his opioid addiction, but he still does not have access to his office. Cooke said he wrote House leadership in an attempt to get Inman back into his office but to no avail.

“You would think that people in the legislature would have a little more empathy for someone in Larry’s position instead of making him drive back and forth to Lansing to do his job,” Cooke said. “He’s working hard at it, but there have been a lot of barriers thrown up in his way that we think are very unfair to him.”

Cooke is also in the process of submitting an appellate brief regarding the recall petition, calling it “unconstitutional.”

“We believe that attempt is prejudicial to Rep. Inman’s right to impanel a fair and impartial jury,” Cooke said. “To have people out on the street circulating petitions that on the very front have the federal charges brought against him, we believe that is a violation of Rep. Inman’s right to be presumed innocent until proven guilty. Effectively, what that petition is doing is flipping the switch on that and presuming him to be guilty.”

Flynn said they will continue to gather as many signatures as possible. Volunteers have already been going door to door, approaching people at farmers markets as well as the post office and library. She said they planned to attend the Traverse City West varsity football homecoming game Friday at Thirlby Field.

“So far, the response has been overwhelmingly positive. A lot of of volunteers don’t have to say more than ‘We’re with the Inman Recall campaign’ before people are ready to sign,” Flynn said. “It’s definitely going to be a challenge (to get the 12,000 signatures), but the community is so clearly behind this and the volunteers are ready to get it done.”

Flynn expects a primary election to determine who will run against Inman will be held in March followed by a recall election in May.

Cooke is hopeful Inman has enough support to weather the storm.

“Hopefully his constituency will have more empathy for him than his House leadership has and allow him to do his job and allow the federal court system to run its course,” he said.

House calls for Inman to resign

TRAVERSE CITY — Larry Inman is under new pressure to resign.