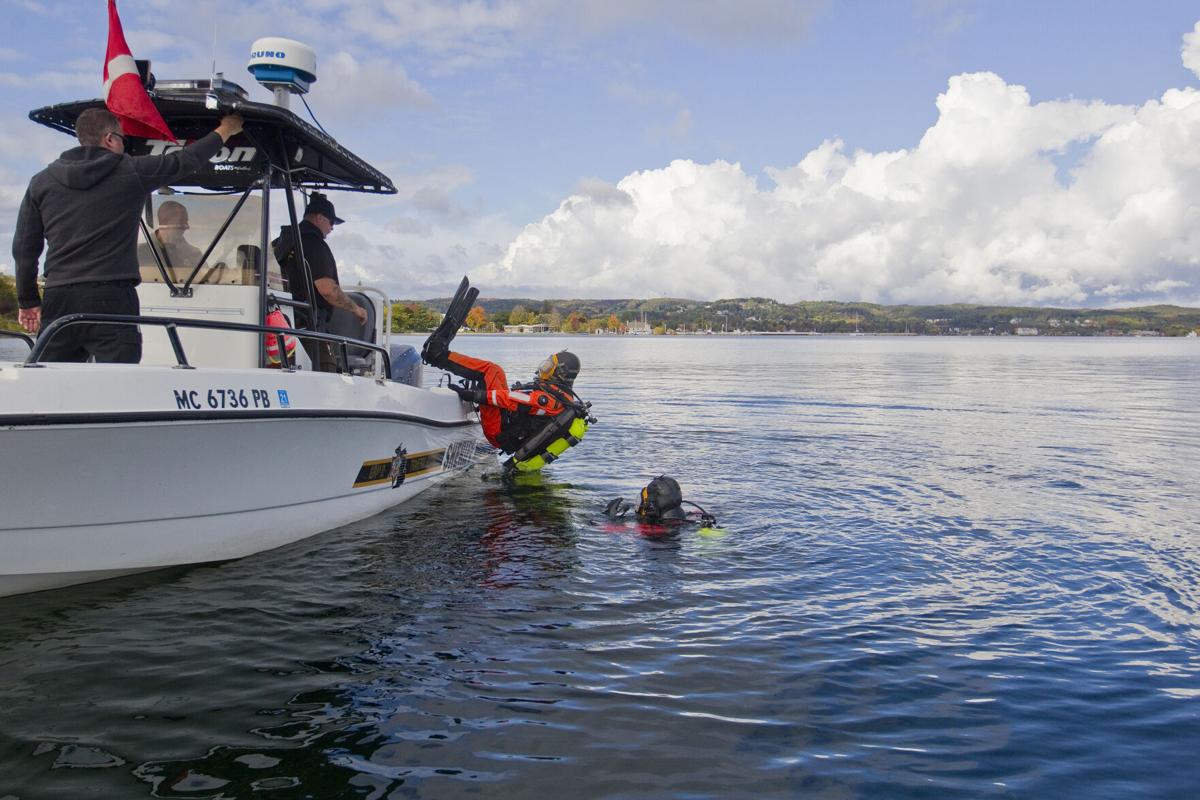 Sgt. Jim Argyle enters the water to join Deputy Nick White on a training dive with other members of the Grand Traverse Sheriff’s Department dive team near the mouth of the Boardman River on West Grand Traverse Bay. 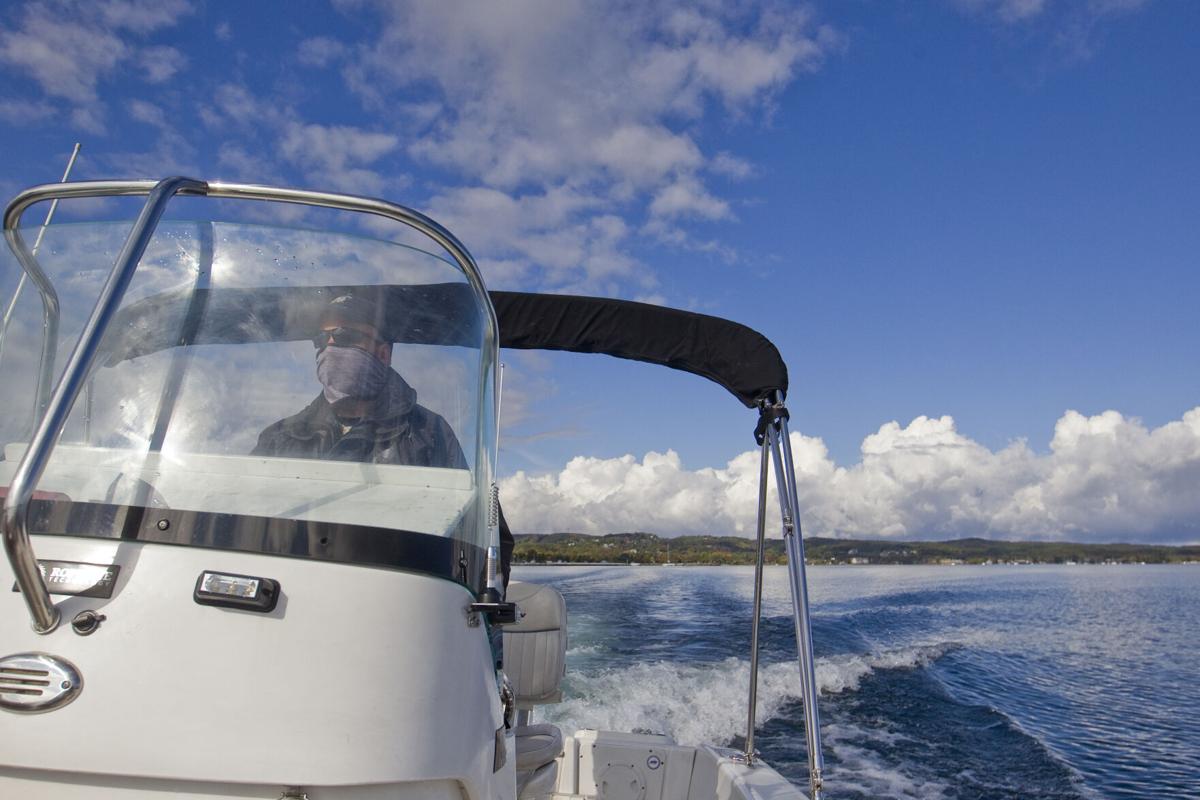 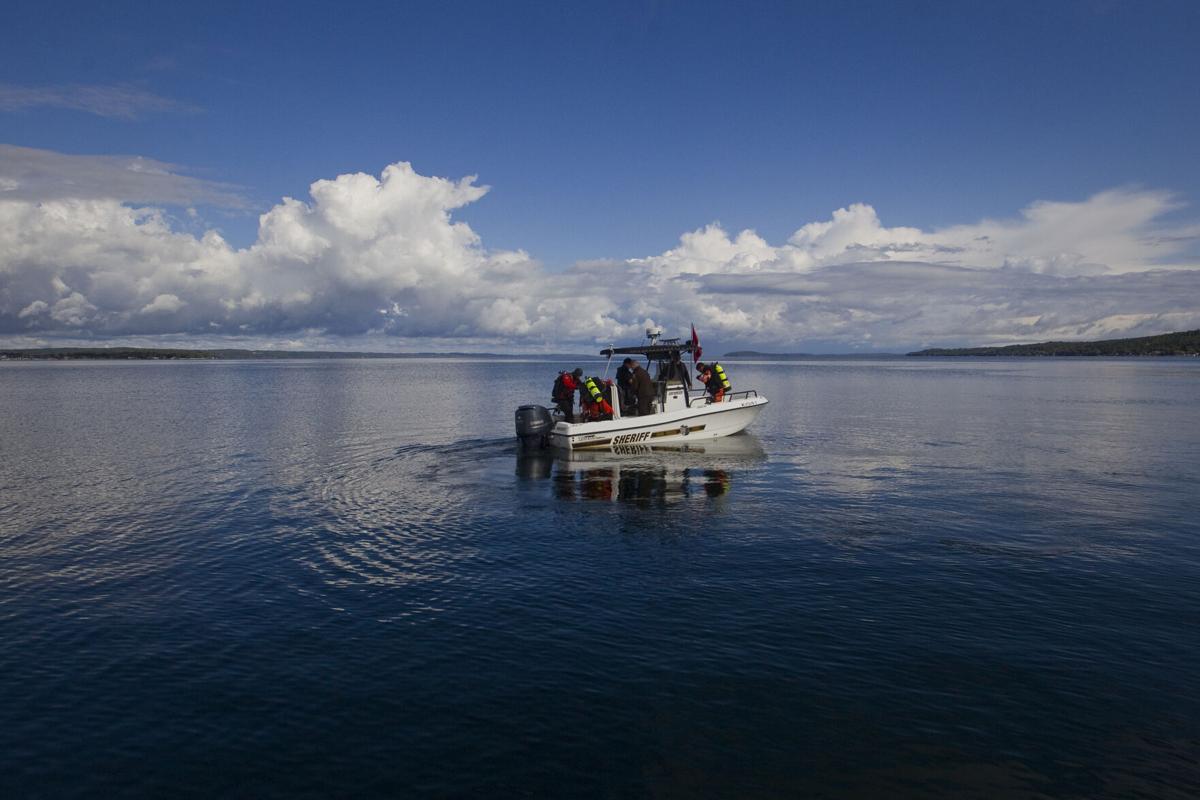 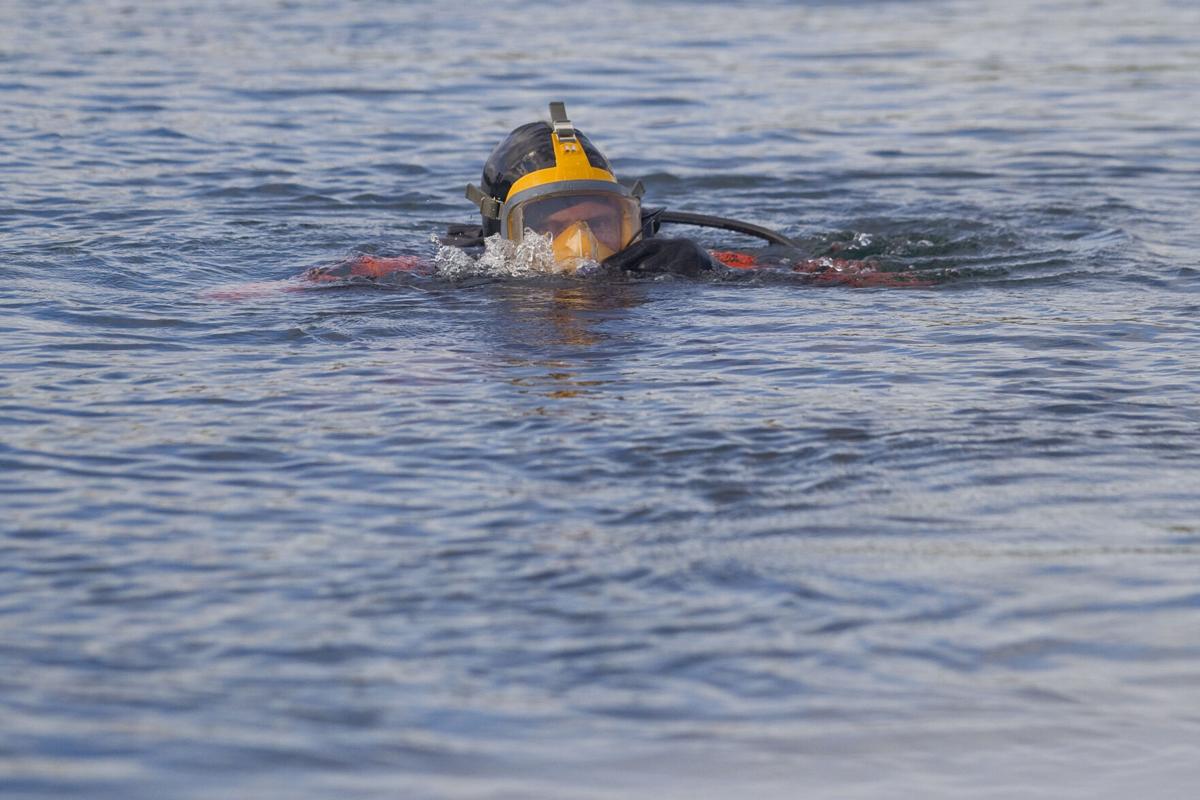 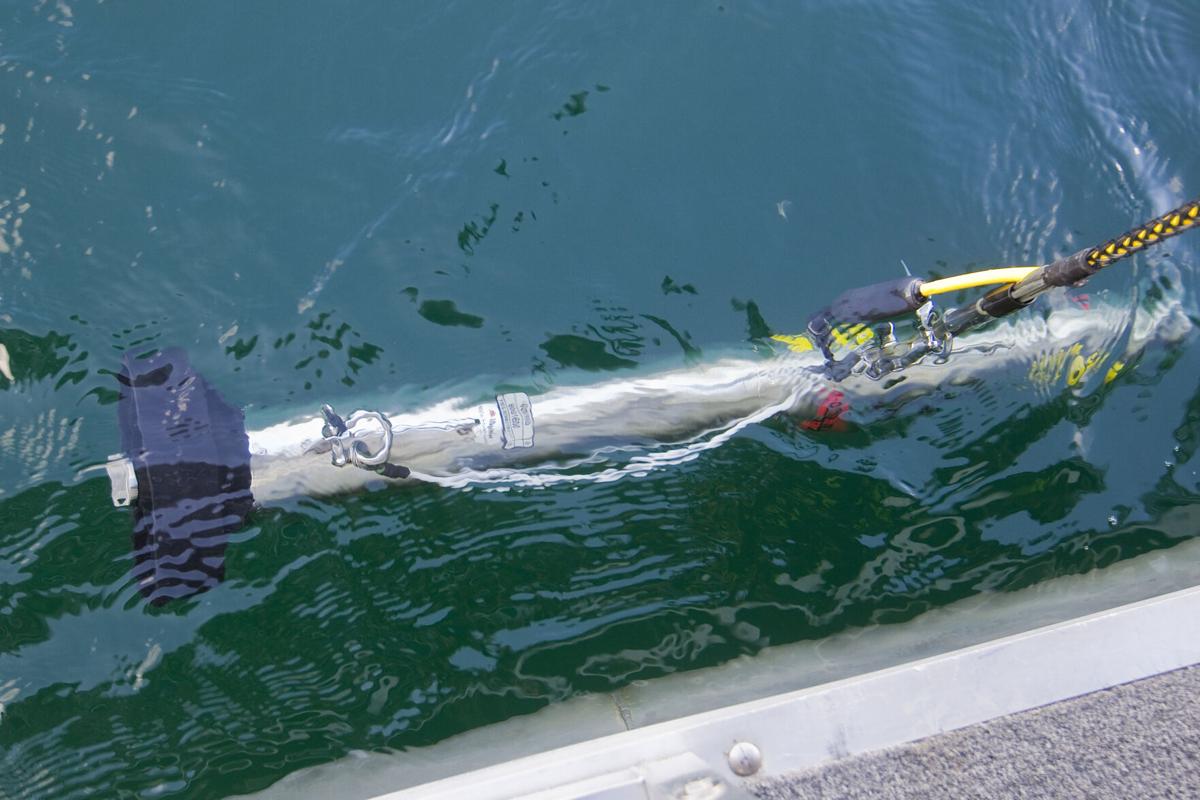 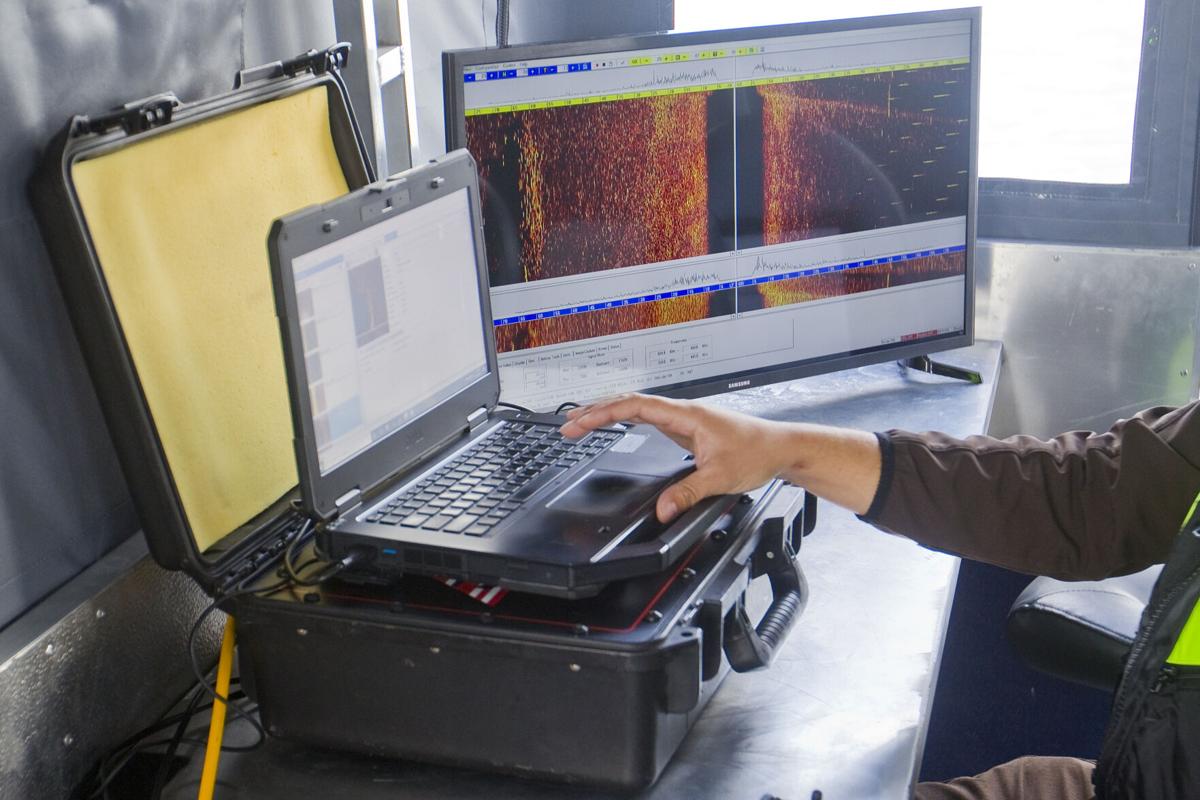 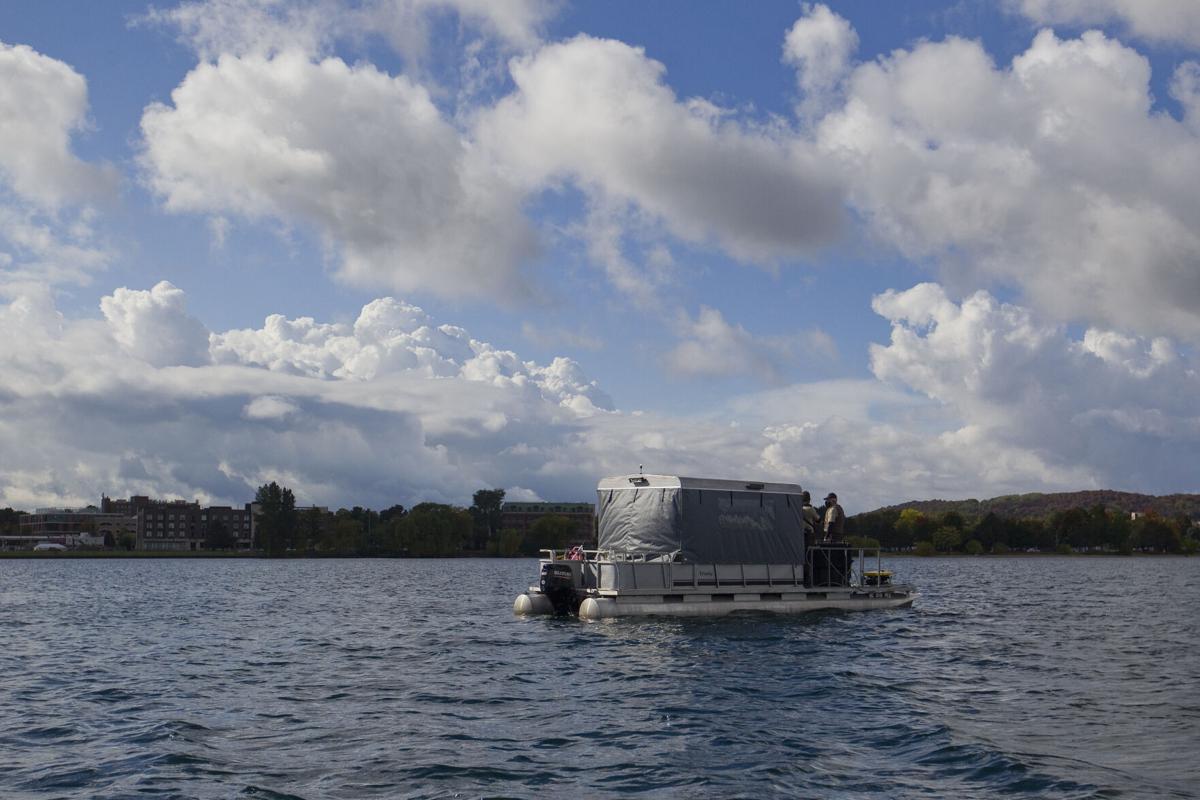 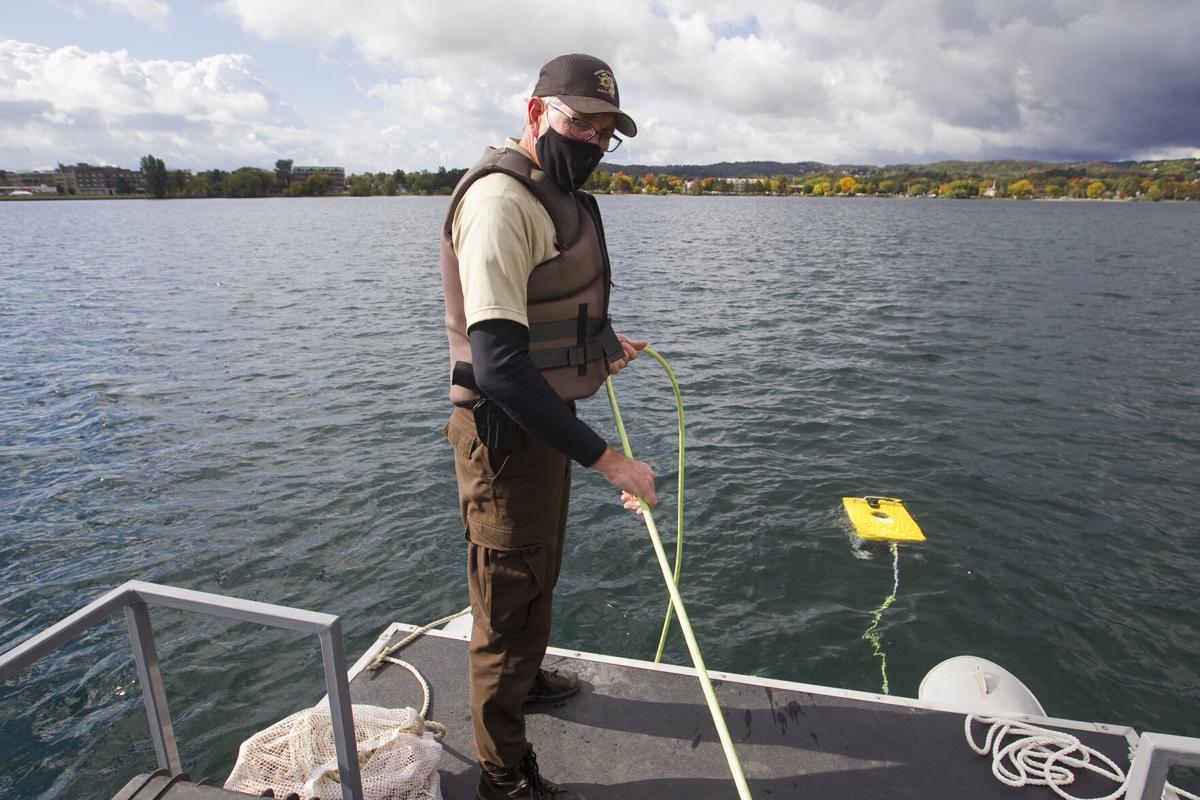 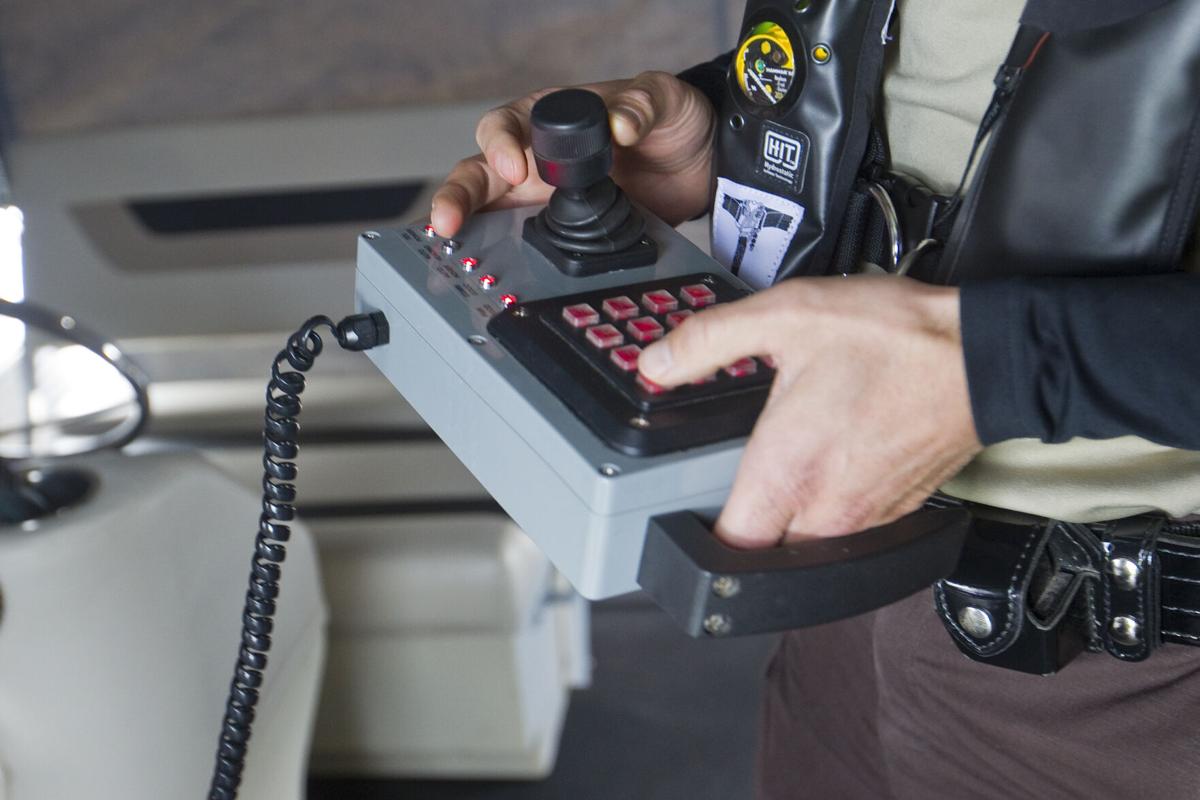 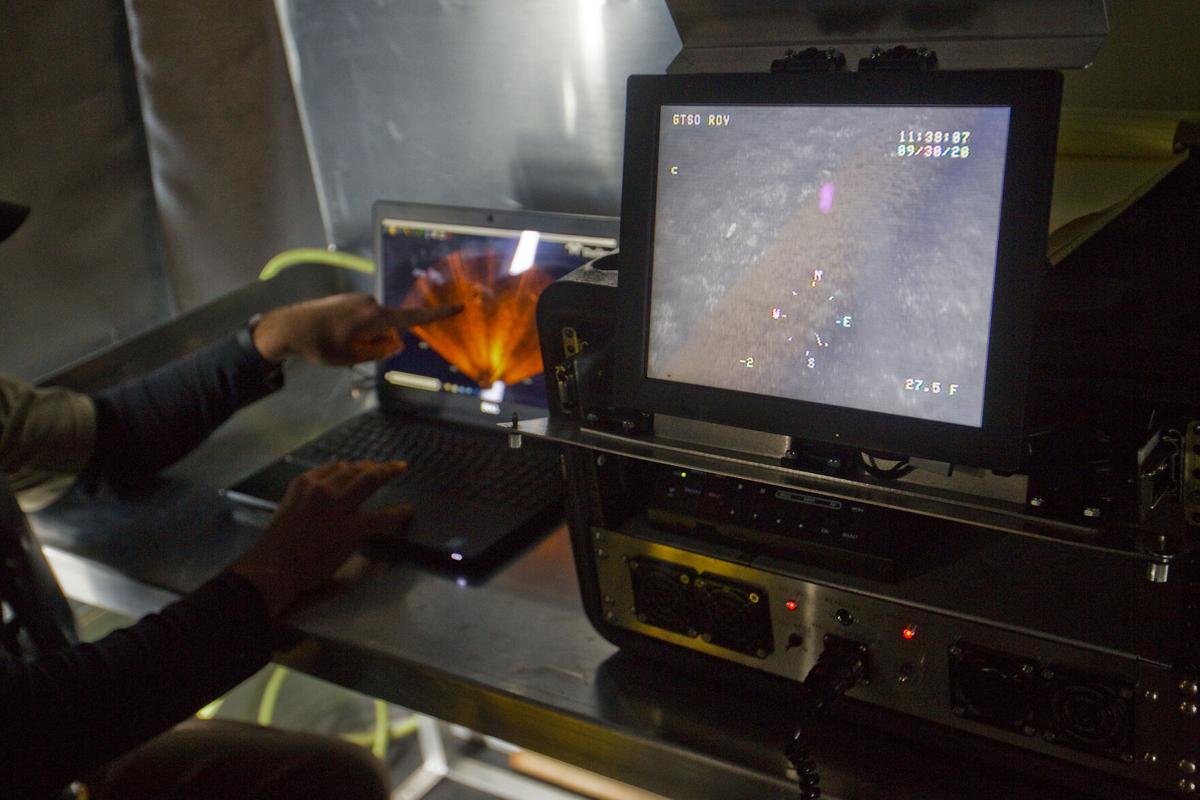 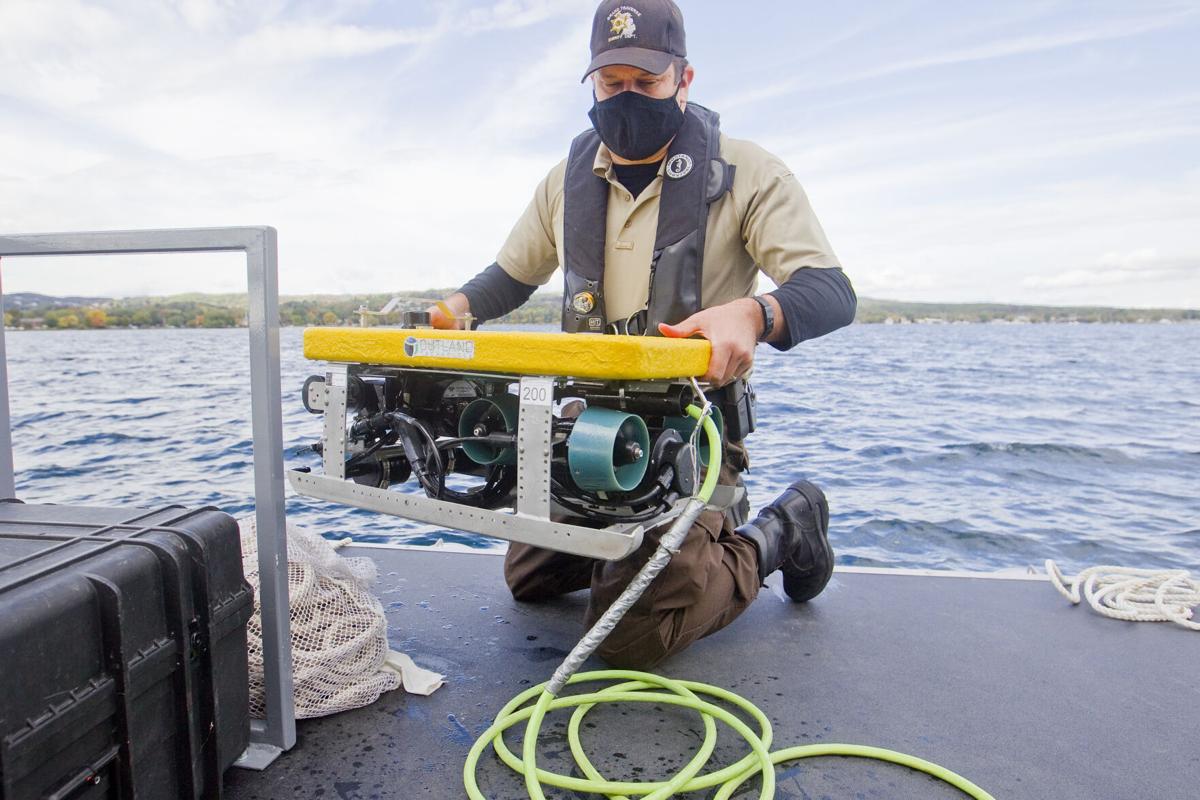 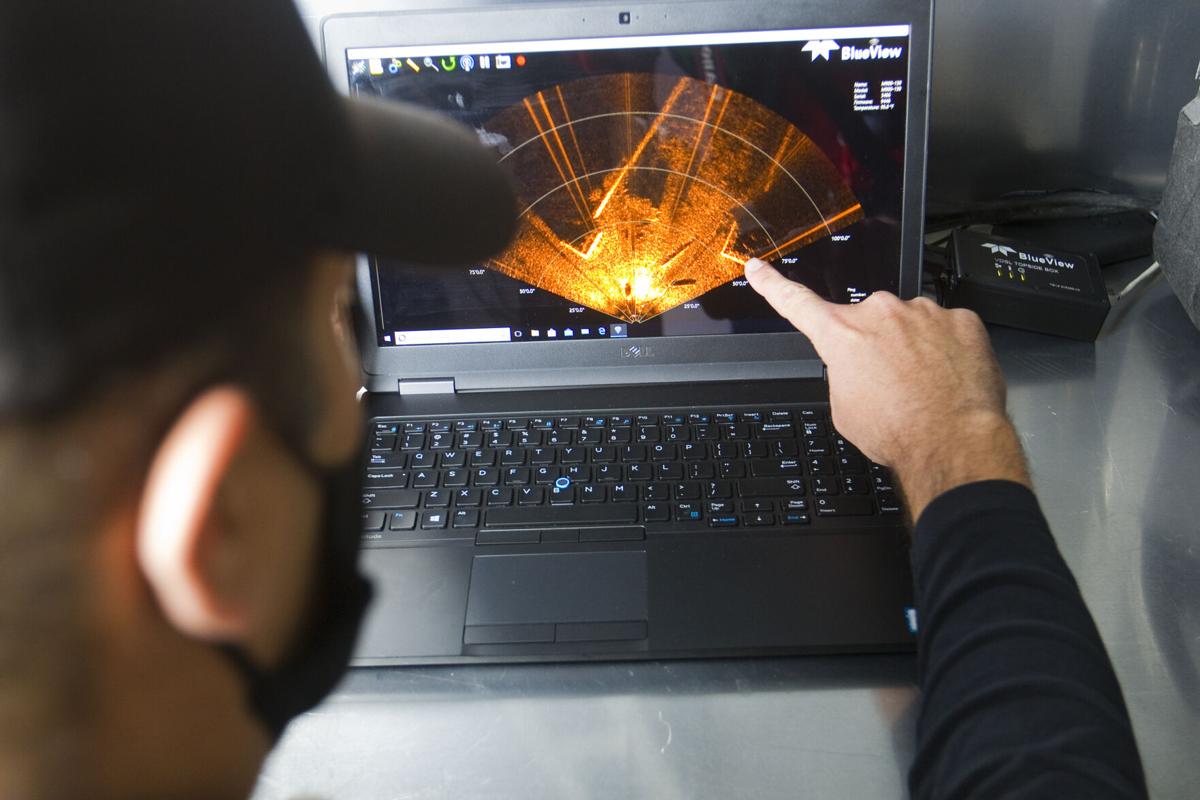 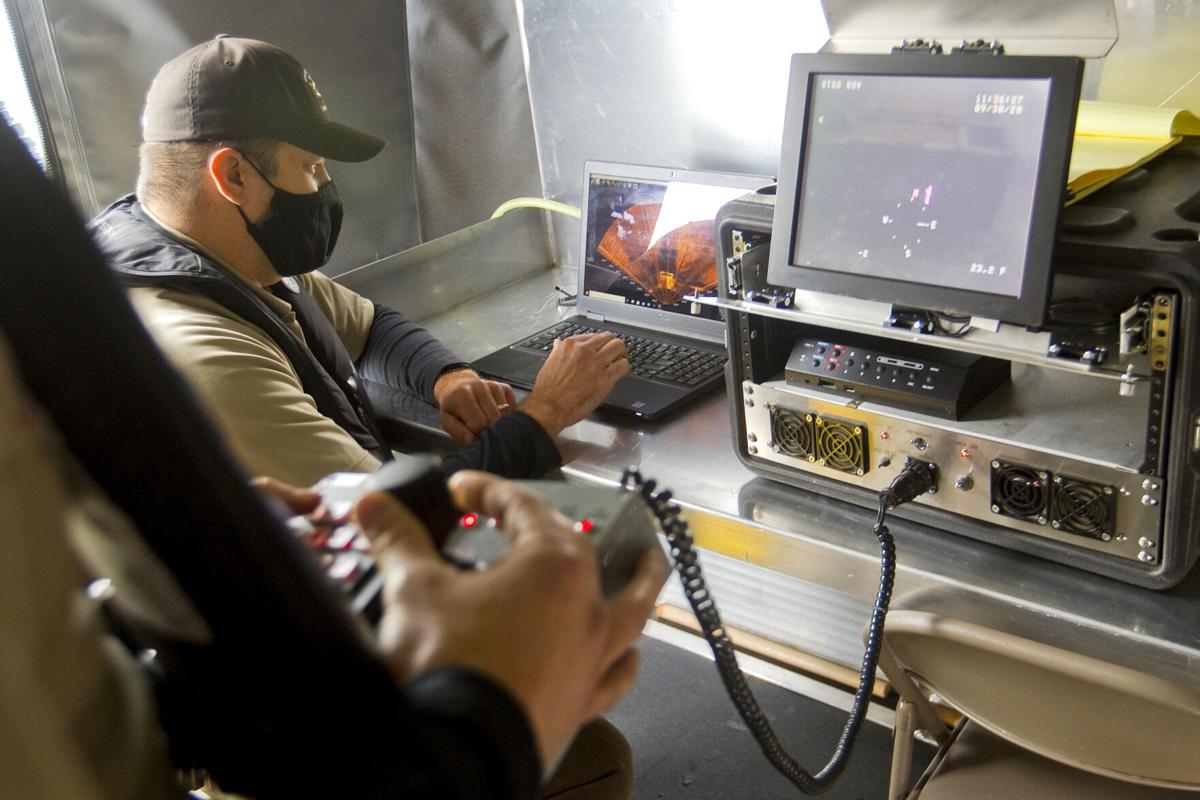 Sgt. Jim Argyle enters the water to join Deputy Nick White on a training dive with other members of the Grand Traverse Sheriff’s Department dive team near the mouth of the Boardman River on West Grand Traverse Bay.

TRAVERSE CITY — Stepping onto the pontoon’s deck transports one to a pseudo-laboratory — equipment carefully organized sonar monitors galore and the kind of tech most cops don’t see everyday.

And with 800 feet of line, a robotic vehicle and thousands of dollars in equipment, Grand Traverse County Sheriff’s Department divers aren’t out for fish.

Lt. Chris Oosse and his team are more versed in searching searching for missing people and evidence.

The Dive Team’s role is scouring the floor of whatever inland lake, river, bay or inlet they’re called to — sometimes for evidence, like discarded weapons. Other times, it’s, for victims of drownings, foul play, boating accidents and other unfortunate events.

The team’s most recent recovery effort was a search for a missing 12-year-old boy, Oosse said. He’d been washed off a pier in Frankfort, and rough water limited rescuers’ options.

When loss looms heavy in a family’s mind, offering them closure and recovery of a loved one’s body can be the only kindness left for law enforcement to offer.

It makes for a delicate process, according to team member Deputy Nathan Ritter.

“If we’re looking for a drowning victim, we’re going to record the area where the victim is — because basically the person is a piece of evidence until we investigate further what happened,” he said. “So that area could be a possible crime scene underwater.”

The team employs nine Grand Traverse County-based divers, along with a couple from Leelanau and Benzie counties. The crew also includes four non-divers tasked with running the department’s ROV — remote-operated vehicle — and Oosse himself.

To join the team, one must be a certified diver. From there, they’ll get plenty of continued training.

“We’ll put them through specialty classes, dive rescue, and we move them up to an advanced scuba diver,” Oosse said during a Wednesday training session. “We just try to push them to the next level and keep training.”

Typically, an excursion begins with the use of side scan sonar. That has a sheriff’s department boat drone along a wider area in lines, picking up sonar images of the lakebottom.

The boat must pass over in lines to create a full view — while side scan offers a view on each side of the vessel, it doesn’t pick up anything directly underneath, according to Deputy Dustin Stickler.

“You don’t wanna miss anything, you know?” said his colleague, Deputy Jason Roelofs.

The team was out training Wednesday as well, checking the sonar equipment and giving themselves a challenge to meet — successfully locating old structures left below West Bay’s surface by a former power plant project.

The sonar, which paints a crude picture of a lake floor via colored lines, shows anything it can’t move through as an inky black blotch.

“You look for shadows,” Stickler said, comparing the view to driving during a snowstorm.

Once the team has identified an area of interest via side scan, they send out their ROV for a closer look. The machine, equipped with sonar, a camera and an arm capable of grabbing and carrying things, offers a much clearer view.

The ROV can be used to mark a spot for divers in low visibility — they can follow the vehicle’s cord down to the bottom. It also helps them best situate themselves for a recovery, either by assisting physically when water is too deep for divers or helping them plan for a dive.

“It speeds up recovery for a drowning victim,” Ritter said. “And the safety of not having a diver in the water, that’s another advantage.”

The ROV also has the advantage in rougher water where diving is difficult.

Still, sometimes a human perspective is important. For example, sonar is ineffective in areas with heavy rock and log debris and weed beds. And in complex terrain, operators have to be mindful of not snaring the ROV’s cord.

“With our divers, we like to cover the shallower areas like weed beds, rock piles, things that have a lot of obstructions to the sonar,” Oosse said. “Just to cover more water and eliminate areas.”

The rig is a department necessity: in Michigan, one of the duties placed on sheriff’s departments is underwater body recovery, Oosse said.

The team is often requested for mutual aid in other parts of northern Michigan — they’ve gone as far as Petoskey, Manistee and Alpena.

And most of the time, Oosse added, they end their missions with success.

“I’d say we’re pretty efficient with it,” he said.