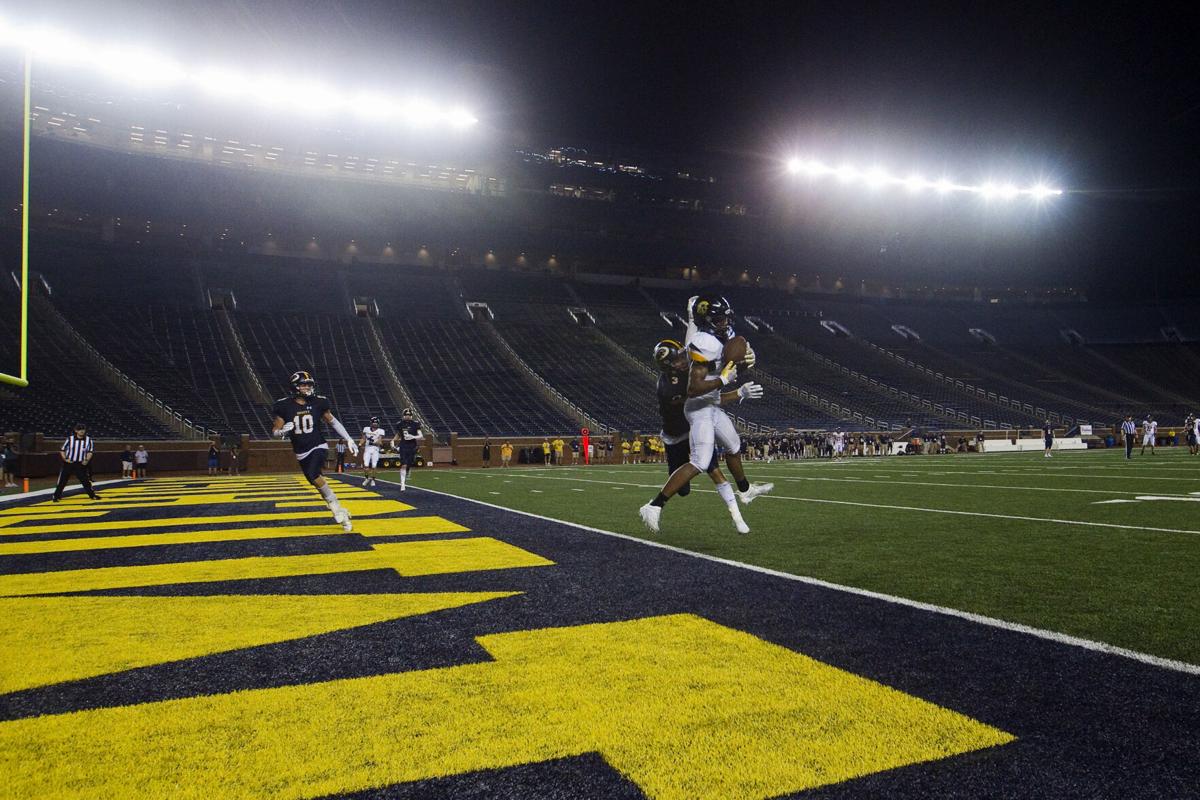 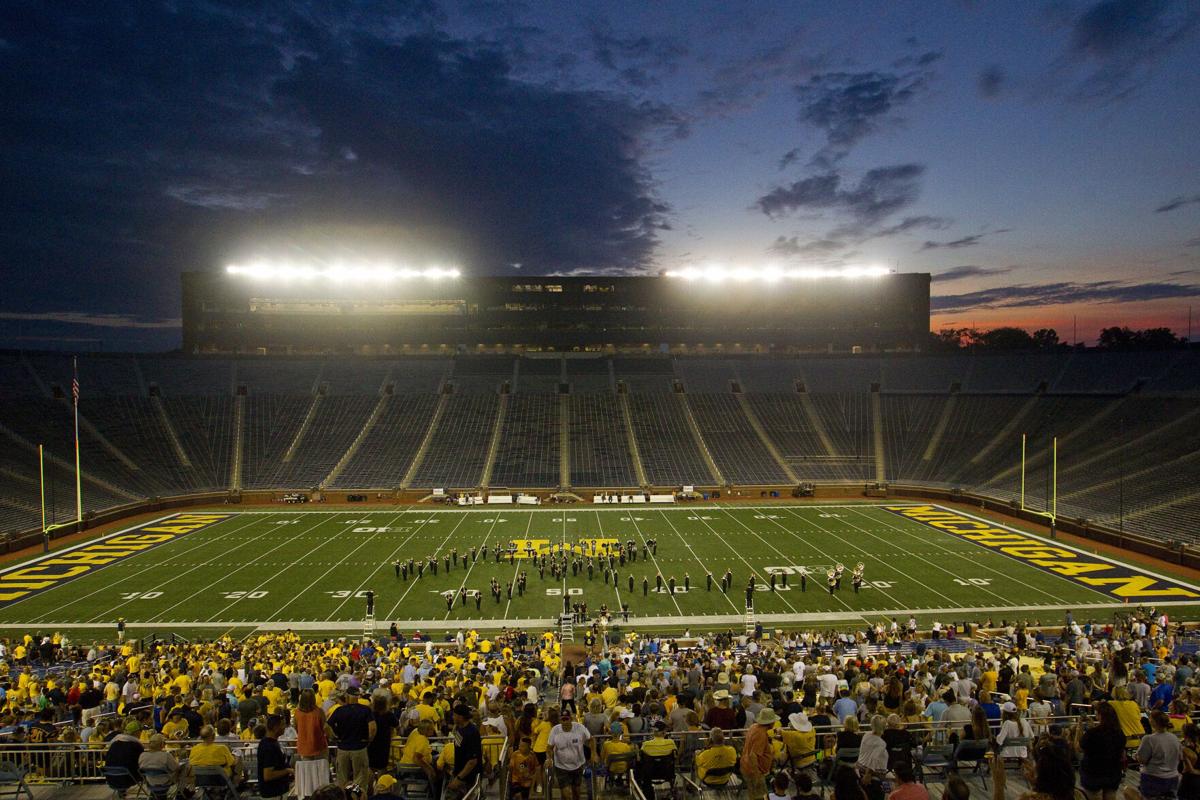 The Traverse City Central Marching Band performs during halftime of Thursday’s game against DeWitt at Michigan Stadium in Ann Arbor. 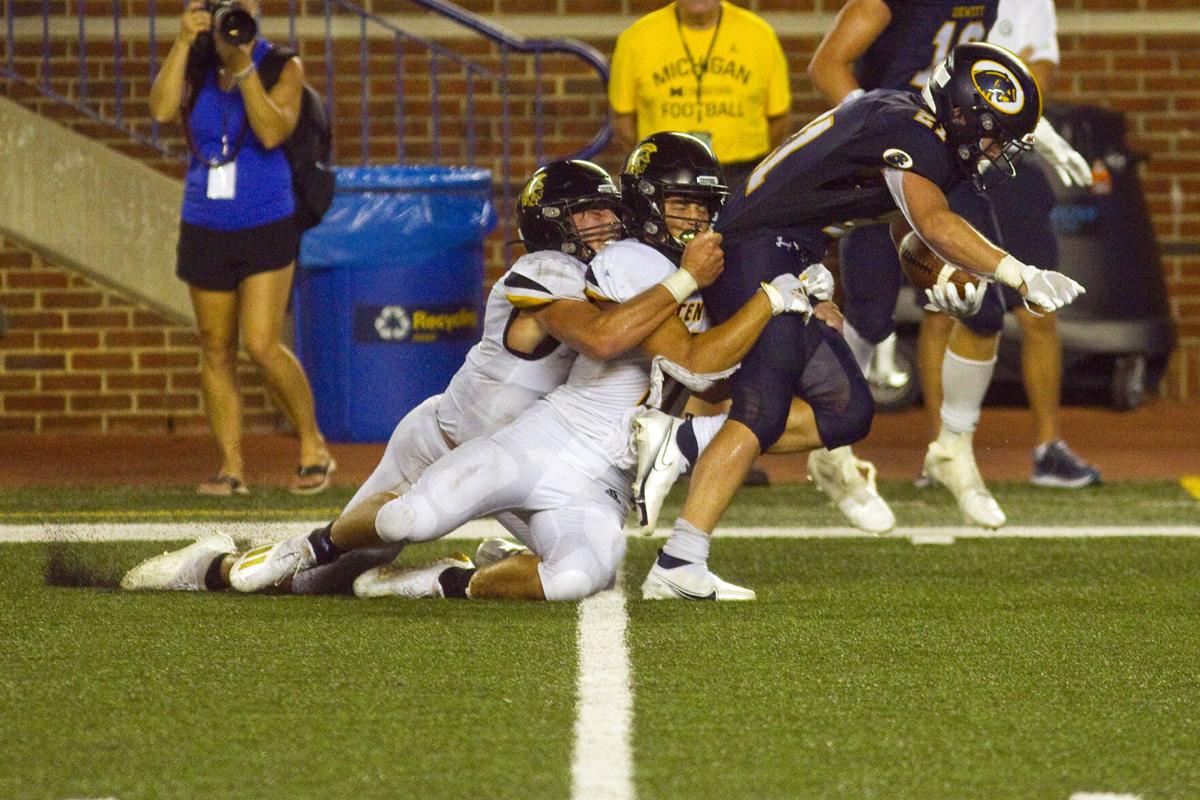 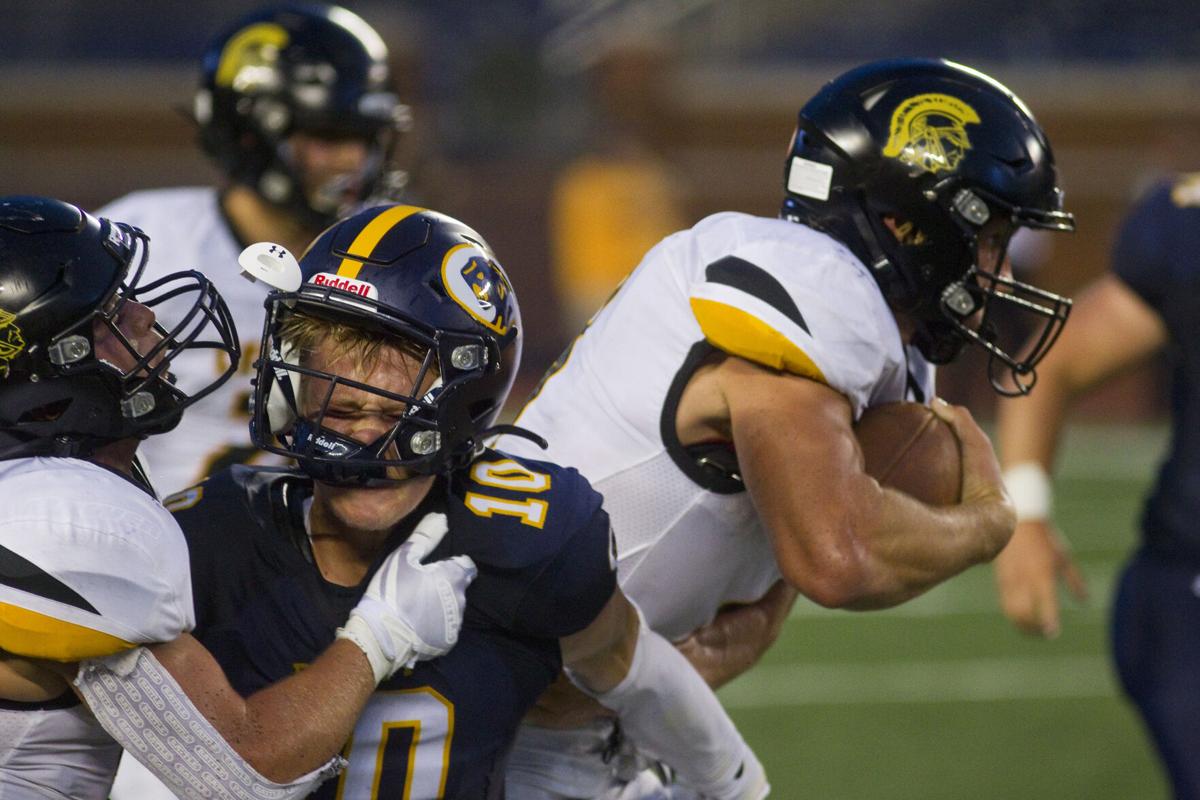 DeWitt’s Tommy McIntosh (10) losses his mouth guard while being hit by Traverse City Central’s Reed Seabase (5) on a run by Josh Burnham (8) in Thursday’s game at Michigan Stadium in Ann Arbor.

The Traverse City Central Marching Band performs during halftime of Thursday’s game against DeWitt at Michigan Stadium in Ann Arbor.

DeWitt’s Tommy McIntosh (10) losses his mouth guard while being hit by Traverse City Central’s Reed Seabase (5) on a run by Josh Burnham (8) in Thursday’s game at Michigan Stadium in Ann Arbor.

The Panthers handed Traverse City Central a 47-27 setback in the season opener for both teams in Thursday’s “Battle at the Big House” football games at the University of Michigan in Ann Arbor.

DeWitt stayed away from Trojans all-state defensive back Carson Bourdo, who typically helped contain the Panthers’ top threat, Wisconsin-bound Tommy McIntosh, who had one early 36-yard touchdown to take a 14-7 lead that DeWitt wouldn’t relinquish.

“We didn’t play well in the first half,” TC Central head coach Eric Schugars said. “It’s kind of heartbreaking because there’s a lot of build-up for this game, a lot of excitement and you want to play well. You want to play better right from the start, and we didn’t, and that kind of hurt. We never could chip away at the momentum.”

DeWitt won the Division 3 state title last year, and Holtz earned Division 3-4 Player of the Year honors on his way to being last year’s only junior Mr. Football finalist.

Holtz proved that was no fluke, dropping passes on the money against a very good Trojan defense that’s averaged giving up less than 200 points a season over the last three years.

“I think our kids showed a ton of heart tonight,” DeWitt head coach Rob Zimmerman said. “We made a lot of mistakes, but you expect that in Week One. Both sides, I think every Week One game we’ll see that, but I think it’s a great starter for us both. We did a lot of really really good things and to beat a team of that caliber the way we did is a pretty good win.”

That was, until a third-quarter drive that really put a damper on Central’s hopes. DeWitt led 26-7 at halftime, but Central moved the ball well to start the third quarter, with a drive that stalled at the Panthers 12 when McIntosh broke up a pass to the back of the end zone. DeWitt answered with a long drive that ended with Holtz’ fourth TD pass to Kurncz, a converted junior varsity quarterback who debuted as a varsity wide receiver in this game.

Central responded with a drive that Notre Dame commit Josh Burnham finished off with a 1-yard, over-the-top dive to pull within 33-13, and the two teams traded scores the rest of the way as Central couldn’t get closer than 13.

“We started off a little slow,” Burnham said. “We didn’t execute what we wanted. I wouldn’t put out one person. I think it was all of us; we all could have done something to make it better. I mean, me personally, I missed some easy throws. I fumbled once. Stuff that we’re going to have to clean up in practice.”

Central kicker Everest Noyes, who played soccer for the Trojans earlier in the day and scored a goal in a 1-1 tie against Saginaw Heritage in Saginaw, handled kicking duties 90 miles away against DeWitt.

TRAVERSE CITY — Will Gaston looks forward to playing in his first TC Patriot Game this fall.