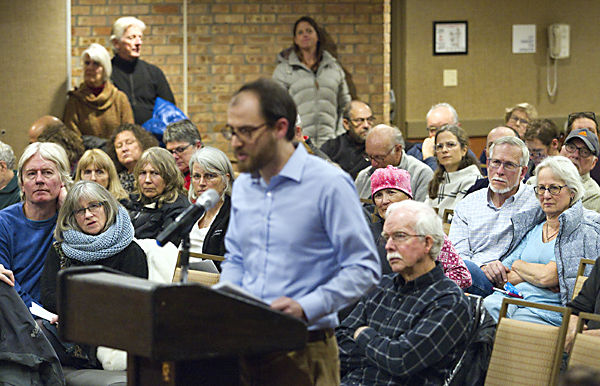 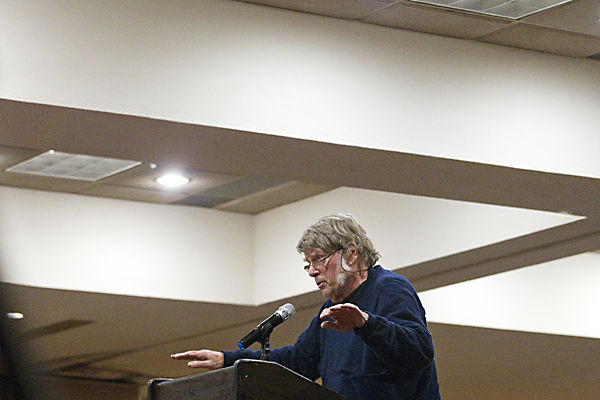 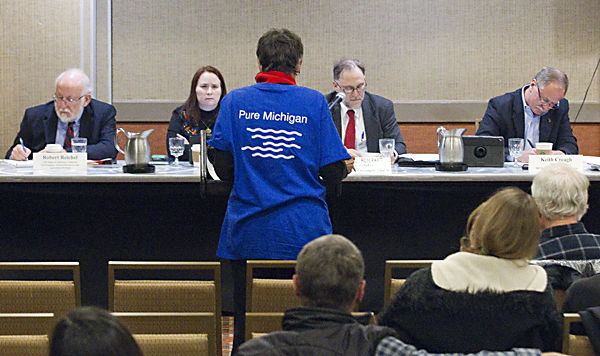 TRAVERSE CITY — The drinking water in West Bay Beach Holiday Inn Resort’s conference room was cold and clean, and William Taylor told a panel of state officials he had gulped plenty of it.

But Taylor, and many others before him, wondered what would happen if Enbridge’s Line 5 leaked oil into the Straits of Mackinac, fouling drinking water for millions.

“I keep trying to think about what else we’d drink, and I can’t come up with nothing,” he said.

Taylor and dozens of other impassioned commenters spoke Wednesday at one of three feedback sessions for an Alternatives Analysis report for Line 5, a controversial and aging pipeline many believe should be shut down.

Michigan Agency for Energy Director Valerie Brader, Department of Natural Resources Director Keith Creagh, Department of Environmental Quality District Supervisor Phil Roycraft and Robert Reichel with the state Attorney General’s environment, natural resources and agriculture division listened as commenter after commenter asked to decommission the line. The four represent the state agencies conducting a review of the pipeline, of which the alternatives analysis is part.

The pipeline not only threatens clean drinking water for millions, but a leak risks destroying the Straits region’s tourism economy for years to come, speakers claimed. Several pointed to the 2010 disaster where an Enbridge-run pipeline spilled oil into the Kalamazoo River, and criticized Gov. Rick Snyder for decisions that seem to put the pipeline operator’s economic interests over Michiganders’ health and prosperity.

For Love of Water President Jim Olson said the company’s application to install more anchors for the pipeline in the straits opens an avenue for the state to challenge the pipeline easement as a whole. The DNR also has broad powers to revoke that easement to protect publicly held lake bottomlands.

The alternatives report itself seems to favor replacing Line 5’s straits crossing with an underground tunnel or pipeline in a trench, Olson said. But it ignores the question of whether existing infrastructure could carry the oil instead.

“It precluded looking at all the lines coming in and out of Michigan in a systemic analysis, which is required by the law,” he said.

Many speakers lambasted a deal Snyder struck with Enbridge in November to force the company to be more forthcoming with pipeline information, and shut down the straits crossing when waves are high. They considered it a short-circuit of the pipeline review process, and wondered if it meant their comments were pointless.

It also ignores the state’s obligations to Native American tribes with treaty-vested interests in the Straits, especially fishing, said Desmond Berry, Grand Traverse Band of Ottawa and Chippewa Indians’ Natural Resources Department manager. He castigated the four in front of him for breaking this obligation and more.

“You’re violating the public trust doctrine to the detriment of all of us by prioritizing the economic interests of Enbridge over the pure waters of the Straits,” he said.

Most speakers talked about the pipeline in broader terms instead of commenting on the analysis report. All but a few thought the decision to shut it down is an obvious one — those few said it’s an important link for Upper Peninsula propane and Michigan petroleum producers.

But Shannon Abbott said she believes the report shows the pipeline isn’t necessary to meet these needs.

Ryan Duffy, Enbridge’s communications strategist, said concerns like those he heard Wednesday are why the pipeline operator agreed to the deal with Snyder and the state.

TRAVERSE CITY — A host of organizations want an aging oil pipeline under the Straits of Mackinac shut down and removed, but that pipeline is a…