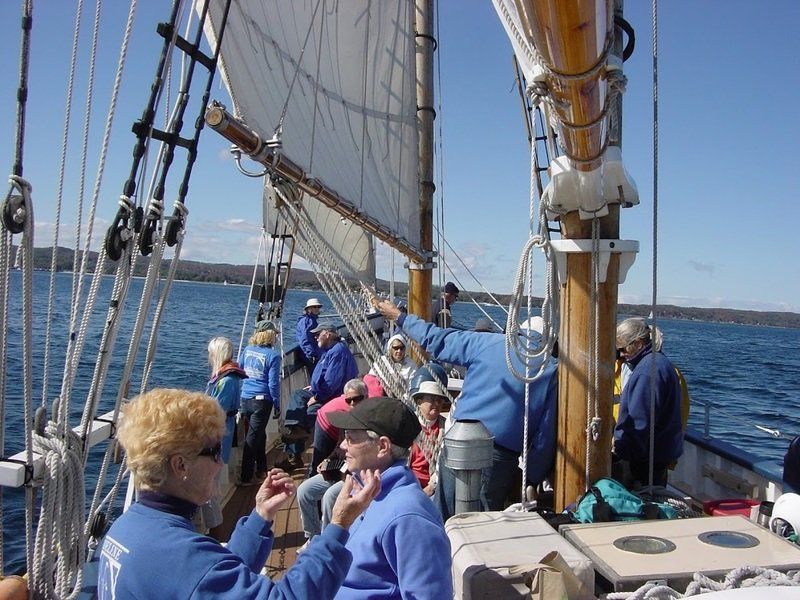 Crew members board the schooner Madeline each sailing season to man the vessel and train. Trainees who complete the program can become deckhands. 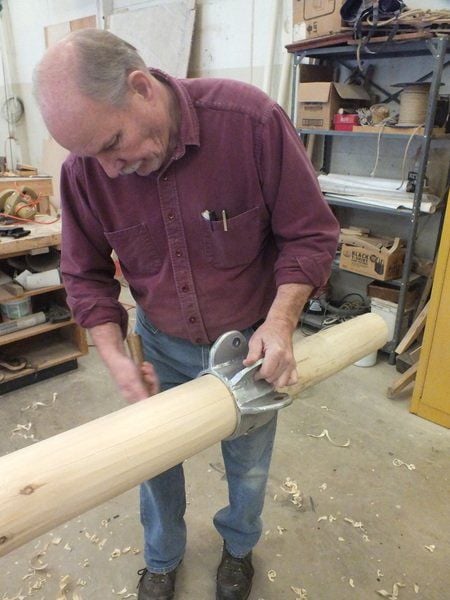 Bruce Davis and other workers spend time making repairs to Madeline and crafting replacement parts, like this jibboom, each winter. Most parts for the traditional, wooden-framed schooner have to be custom-made. 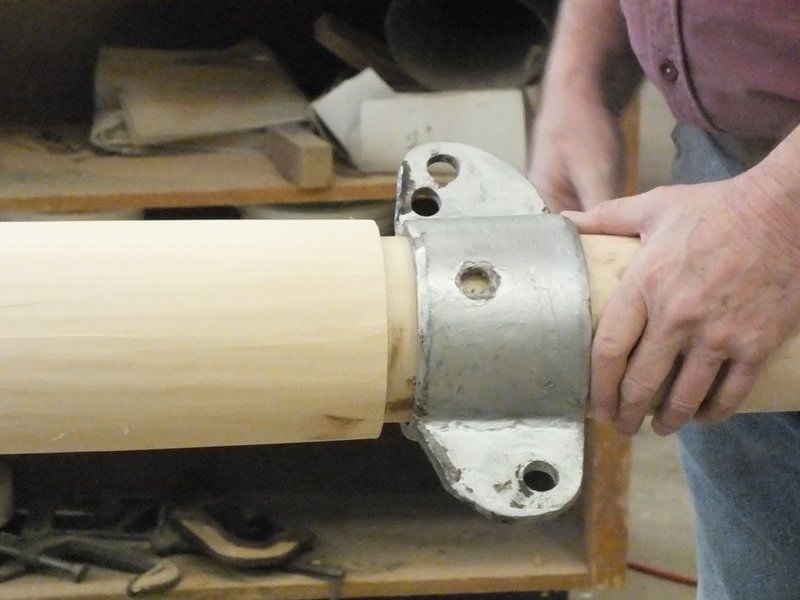 Woodworker Mary Kline works on crafting a jibboom for the Madeline. The piece is being built during the winter months, in time for the schooner's summer sailing trips.

Crew members board the schooner Madeline each sailing season to man the vessel and train. Trainees who complete the program can become deckhands.

Bruce Davis and other workers spend time making repairs to Madeline and crafting replacement parts, like this jibboom, each winter. Most parts for the traditional, wooden-framed schooner have to be custom-made.

Woodworker Mary Kline works on crafting a jibboom for the Madeline. The piece is being built during the winter months, in time for the schooner's summer sailing trips.

TRAVERSE CITY — Nothing compares, Laura Quackenbush says, to the gleam of the water and the spray of the surf under Madeline’s billowing sails.

But it takes some work to get there.

“The schooner Madeline is an all-volunteer crew,” said Quackenbush, co-coordinator of the Maritime Heritage Alliance’s tall ship program. “We have a specific training structure — just as any well-built ship has structure.”

The organization will begin recruiting deckhands in February for its 2018 training program, which, after some practice, allows participants to man the Madeline and MHA’s smaller vessels.

“The first summer I did it was the best summer I’ve had in northern Michigan in a long, long time,” said Tom Bowes, a mate on the Madeline and co-coordinator alongside Quackenbush. “You meet a lot of interesting people from all walks of life.”

Madeline, a 56-foot replica of an 1840s shipping schooner, sails the Great Lakes each summer to offer dockside tours and educational presentations. Recruitment begins in February to ensure Madeline has plenty of hands to call on.

“We like to start out with at least 20 people,” Quackenbush said. “We’re always recruiting new people to sail on the boat and take care of her.”

Training starts in early April, first with classroom sessions focused on boating safety, emergency procedures, schooner terminology and marlinspike seamanship, which is how to use different knots and correctly maintain line.

“We aren’t teaching people how to trim sails — we teach them how to sail as part of a crew,” Quackenbush said. “On a tall ship, you don’t do anything alone.”

In late May and early June, trainees get the chance to test what they’ve learned.

“We’ll actually do on-water sessions, so they can get on the lake and practice their skills,” Quackenbush said. “That just gives them practice working with seasoned crew members.”

To participate in the program, trainees must apply for MHA membership and pay a one-time $50 fee.

Every trainee, like deckhand Kathy Sanders, starts aboard Madeline.

“I had sailed tiny recreational boats, but nothing to the degree of a tall ship. I was pretty much starting from the ground up,” said Sanders, who joined the program in 2016. “The volunteers and captains are so helpful and make you feel like you want to get more involved.”

“The rigging is much more complex — we have seven sails. The mates need to know how to raise all those sails, trim them and maintain (them),” she said. “There’s a huge emphasis on safety. There’s nothing you do that you don’t need to know how to do correctly and safely. Raising a couple hundred pounds of sails, using line — there’s a lot you have to know.”

After completing spring training and joining seasoned crews throughout the summer, trainees can return as deckhands for the next sailing season. From there, those who put in enough time and effort can earn the title of mate and, eventually, first mate.

A typical Madeline crew includes a captain, a first mate and a few mates and deckhands, so "everyone has a different skill/knowledge level they need to achieve,” Quackenbush said.

Moving up the ranks takes a lot of investment.

“This isn’t a walk in the park — it does take a commitment,” Quackenbush added. “It’s strictly based on experience level and what we see in that crew member. They have to want to move up.”

It’s worth the effort though, they say.

“It’s totally unique,” Quackenbush said. “There’s nothing like it, being out there on the lake. Especially on a starry night, when you can see the silhouette of the ship on Lake Michigan.”

Keeping Madeline in top sailing condition is a year-round job.

“We have people going down to check on the boat every few days,” Quackenbush said. “You can’t just walk away once you put the winter cover on.”

This winter, crews are building a new jibboom — a 29-foot piece at the front of the schooner that supports sails and lines — out of white pine. Because of Madeline’s wooden structure, most replacement pieces require a custom job, and repairs are performed regularly.

“We do all those things ourselves — everything we can,” Quackenbush said.

Those projects are done during the off-season to keep Madeline on the water in the busy summer months.

Madeline is known for its month-long voyages around the Great Lakes, and every three years, the vessel participates in the Tall Ships Challenge, which brings hundreds of historic vessels together for port-to-port races.

This year — an off-year for Tall Ships — Madeline’s schedule includes a trip to Sandusky, Ohio, and several stops along the way.

“We change crews and captains every Saturday (during those voyages),” Quackenbush said. “That way, people can do it on their vacation.”

The program has been going strong for 28 years, Quackenbush said, and Madeline has amassed about 400 crew members.

“Every time we go out, the crew is different,” she said. “Thousands and thousands (of people) have come aboard Madeline as she’s sailed through the Great Lakes, and we’ve had hundreds of crew members.”

Each member of the crew has their own reasons for getting involved.

“I really appreciate the history that’s behind the tall ships and schooners, and the role they play in Grand Traverse’s history,” Sanders said. “To keep that alive, I think, is really important.”

“It’s a real thrill,” Bowes added. “Some days we’re out there and we have high winds and waves and the boat is rocking. Other days, we have very little wind and we have to use the motor.”

“It’s an experience — one that, in other parts of the country, is not necessarily available,” Sanders said. “I'm glad I did it. It's one of those things that, the more you practice and get involved, the more you get out of it."

Recruitment for the tall ship program begins at a Maritime Heritage Alliance open house from 10 a.m. to 2 p.m. on Feb. 3 at the Discovery Center, 13268 S. West Bayshore Drive, Traverse City.

The public is welcome at the event, which will also feature presentations on other MHA programs and tours of the facilities. Woodworking demonstrations will be offered as well.

For more information on the open house, call 231-946-2647 or see www.maritimeheritagealliance.org.

Crew members under 18 must bring along a parent or guardian.

TRAVERSE CITY — Nancy Thornton is a dedicated friend, caretaker and mate onboard the schoone…

TRAVERSE CITY — Heather Jankens has a strong spirit of adventure, loves to sail and is passi…