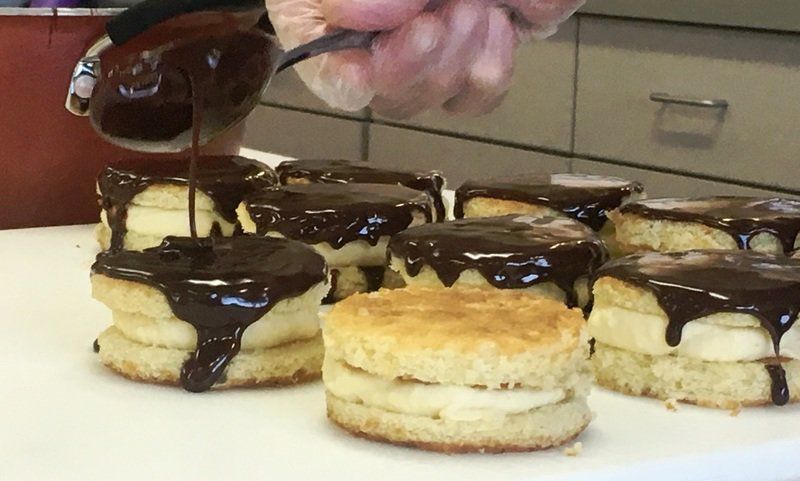 The final element of a Boston cream pie is chocolate ganache — retired chef Tom Sisco makes his with melting chocolate. 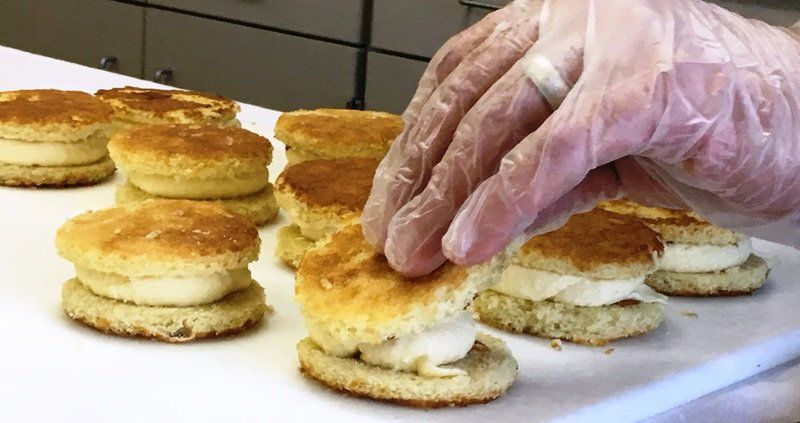 Chef Tom Sisco adds pieces of cake to miniature Boston cream pies. It's one of four methods he taught Saturday at the Kingsley library to make the dessert, along with a cake roll, parfait and larger, traditional cake.

The final element of a Boston cream pie is chocolate ganache — retired chef Tom Sisco makes his with melting chocolate.

Chef Tom Sisco adds pieces of cake to miniature Boston cream pies. It's one of four methods he taught Saturday at the Kingsley library to make the dessert, along with a cake roll, parfait and larger, traditional cake.

KINGSLEY — Made-from-scratch Boston cream pie — just like mom made — has long been a birthday tradition for Tom Sisco.

Sisco, who’s worked everything from kitchens in four-star hotels to mom-and-pop diners, has been keeping up with his passion for cooking by hosting Simply Delicious, a free monthly cooking class.

“I do this because I like to cook. When I was in seventh grade, my mother said, ‘Tom, anyone who likes to eat as much as you do needs to learn how to cook,’” Sisco said. "This just gives me the opportunity to keep those creative juices flowing.”

The goal of the Saturday morning classes — which always end with a sample of the dish Sisco makes in real time before his audience — is to present daunting dishes in an approachable, easy-to-follow manner.

Since the classes began six years ago, Sisco has drawn a dedicated crowd of regulars, like Mary and Walt Ludwick.

Newcomers are always welcome to come and learn — and taste — too.

“I told my husband, ‘You know, you get to eat after,’ and now he’s a regular, too,” said Mary, who’s been attending since Sisco's first class.

A self-described picky eater, she said she appreciates Sisco’s inclusion of recipes outside her comfort zone, like a West African peanut soup and several Indian dishes.

“I like all of (the recipes),” Mary said. “He keeps them simple so people can come and realize how easy it is to make good food.”

Sisco’s inspiration for the monthly dishes comes from a variety of different places — sometimes his own kitchen. Some months, he’ll let the class suggest ideas. Sisco usually creates the recipes from scratch or pulls favorites from his collection, like Saturday’s Boston cream pie — a childhood favorite.

“For each of our birthdays, (we) got to choose what our dinner would be, and what our birthday cake would be,” Sisco said. “Mine was always, from the first time I had it, Boston cream pie.”

While his mom used boxed cake mix and instant pudding, the goal Saturday was to show the ease of making a multi-element cake like Boston cream pie from scratch. Sisco even made one of the versions — he did the recipe four ways — with gluten-free flour.

“Truthfully, when I started to cook gluten-free at Oryana, it was a pain in the tookus,” he said. “But once you figure it out, it’s worth it.”

“Now don’t forget to add the vanilla, like I did on my test batch,” Sisco said with a grin.

The cakes went by with ease but he did issue a warning about custard — the most laborious part of the recipe.

“You have to whisk it constantly or it will burn and curdle,” he said, whisk in hand.

Make sure, Sisco added, to add your vanilla last — otherwise some of the flavor cooks out.

“He makes cooking look so much easier than when I do it,” said attendee Carol Inman, who lauded the chef throughout Saturday’s demonstration. “As you get older, it’s just easier to use the cake mix and the pudding mix. But it’s not so difficult to do it the old fashioned way.”

Many in the audience were just as impressed by the mouth-watering aroma filling the room — even chef Sisco had to stop himself from licking his fingers.

“I can’t believe you’re not up here devouring this yet,” he said to the crowd.

They took him up on the offer.

“Walt, the second piece is just as good as the first,” Inman said, nudging her classmate. “I went for the piece with the most chocolate — and it tastes even better on the happy birthday plates.”

At next month's class, slated for 10 a.m. on March 24, chef Tom Sisco will offer a demonstration on brie-baked salmon. The free class is held monthly at the Kingsley District Library, 213 S. Brownson Ave., Kingsley.

Heat the milk and butter until butter melts. Set aside.

Whip eggs until foamy. Slowly add the sugar and continue to whip 5-7 minutes.

Slowly add the milk/butter mixture to temper the egg. Whisk together the flour, baking powder and salt. Add and mix until combined. Stir in vanilla. Pour into 9-inch round cake pan coated with cooking spray and flour. Bake 350 degrees for 20-22 minutes. Remove from oven, loosen cake from the sides of the pan with a butter knife. Invert on wire rack to cool completely. When cooled completely, remove from pan.

Whisk together conrstarch, sugar and salt. Add the eggs and mix until smooth. Bring the cream to a gentle boil. Remove from heat and slowly add about 1/2 to the egg mixture, whisking constantly to temper the eggs. Whisk the tempered egg mix into the remaining cream. Cook over low heat, stirring constantly until mixture thickens.

Remove from heat and stir in the butter until melter. Then stir in the vanilla. Pour the custard into a bowl and cover with plastic wrap to prevent a skin from forming. Chill until ready to use.

Heat cream to a gentle boil. Pour over chocolate and whisk until chocolate is melted and ganache is smooth.

To assemble: Remove cooled cake from pan and slice in half horizontally. Put the top half on cake plate (cut side up) and cover with custard filling. Place bottom half of cake (cut side down) over filling. Pour warm ganache over top of cake, spreading to the edges, allowing some to drizzle down the sides.