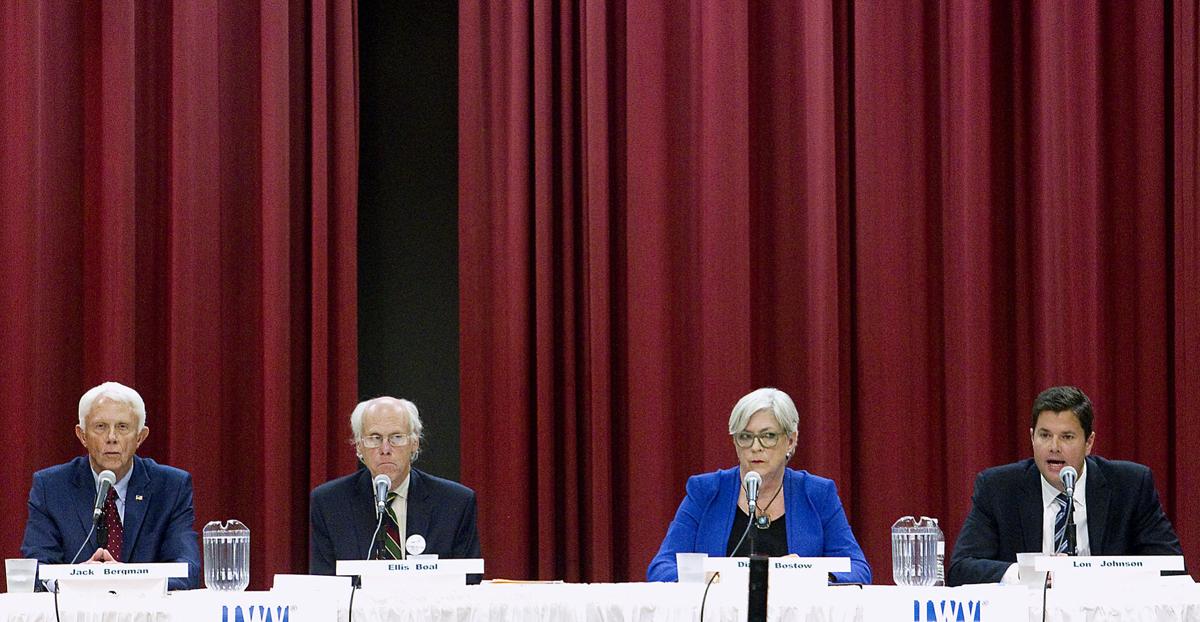 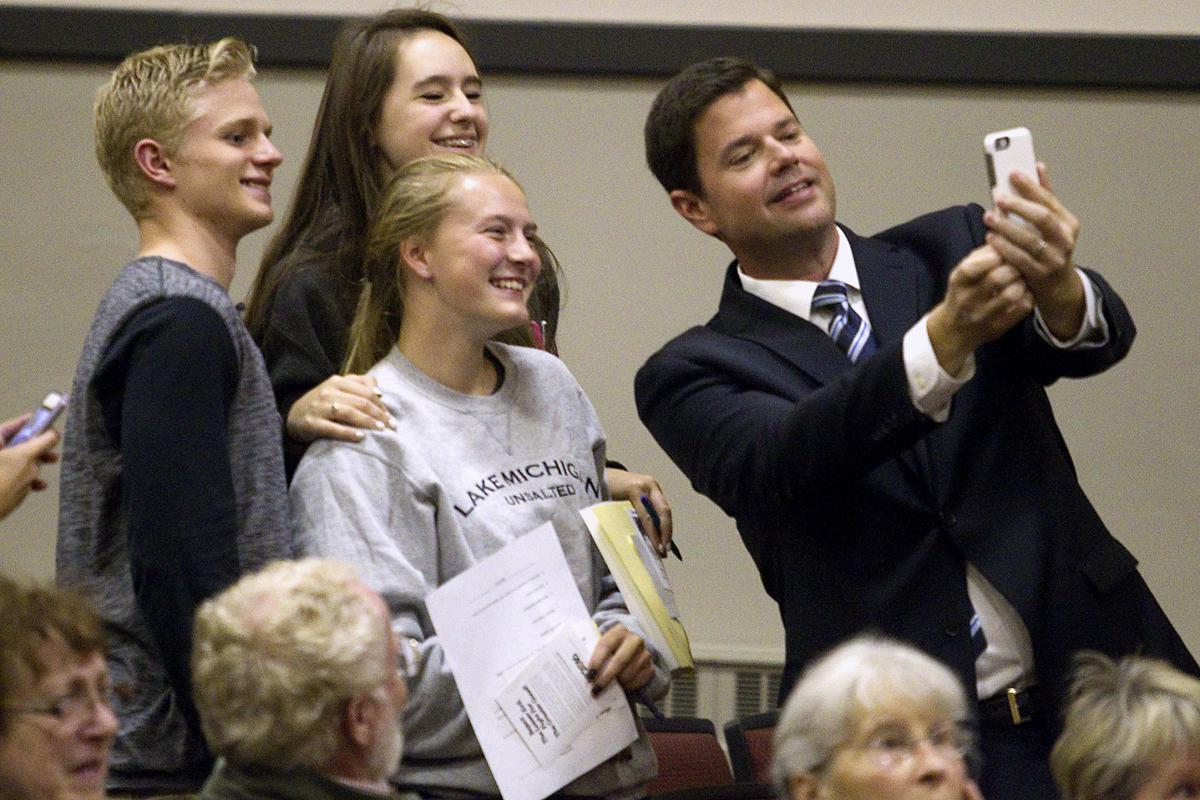 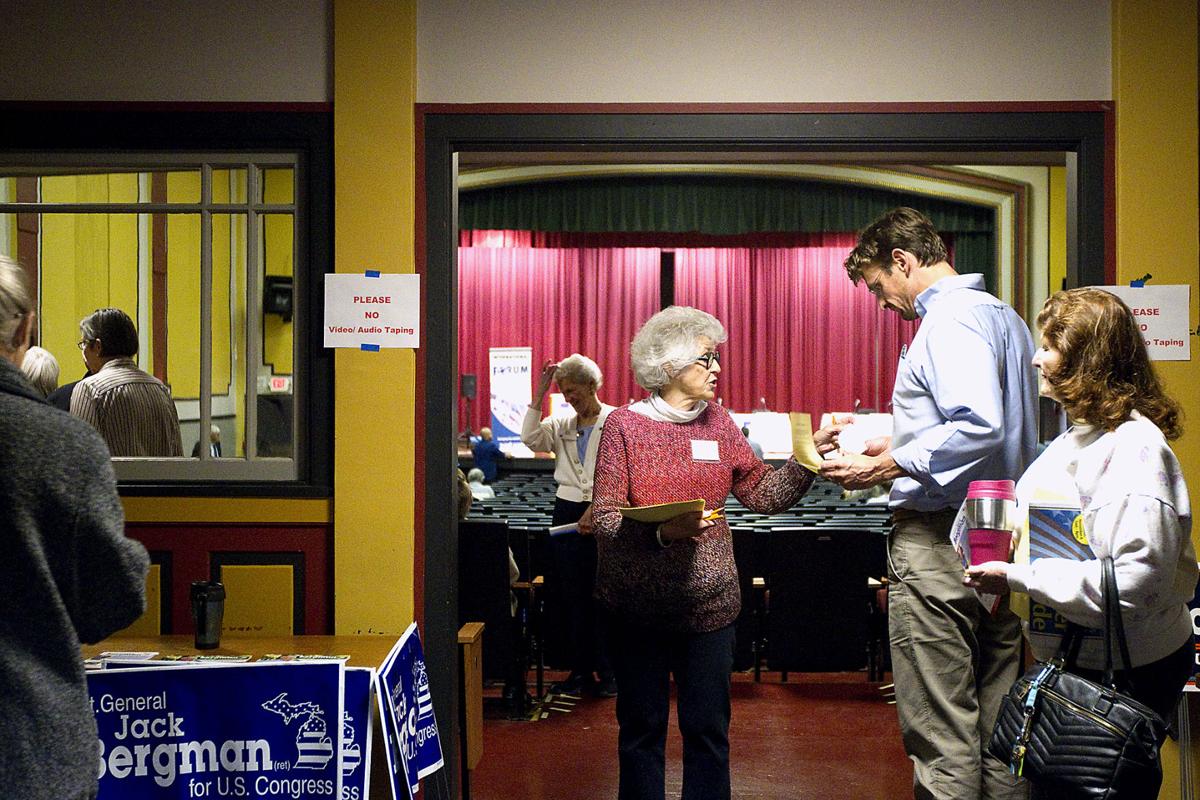 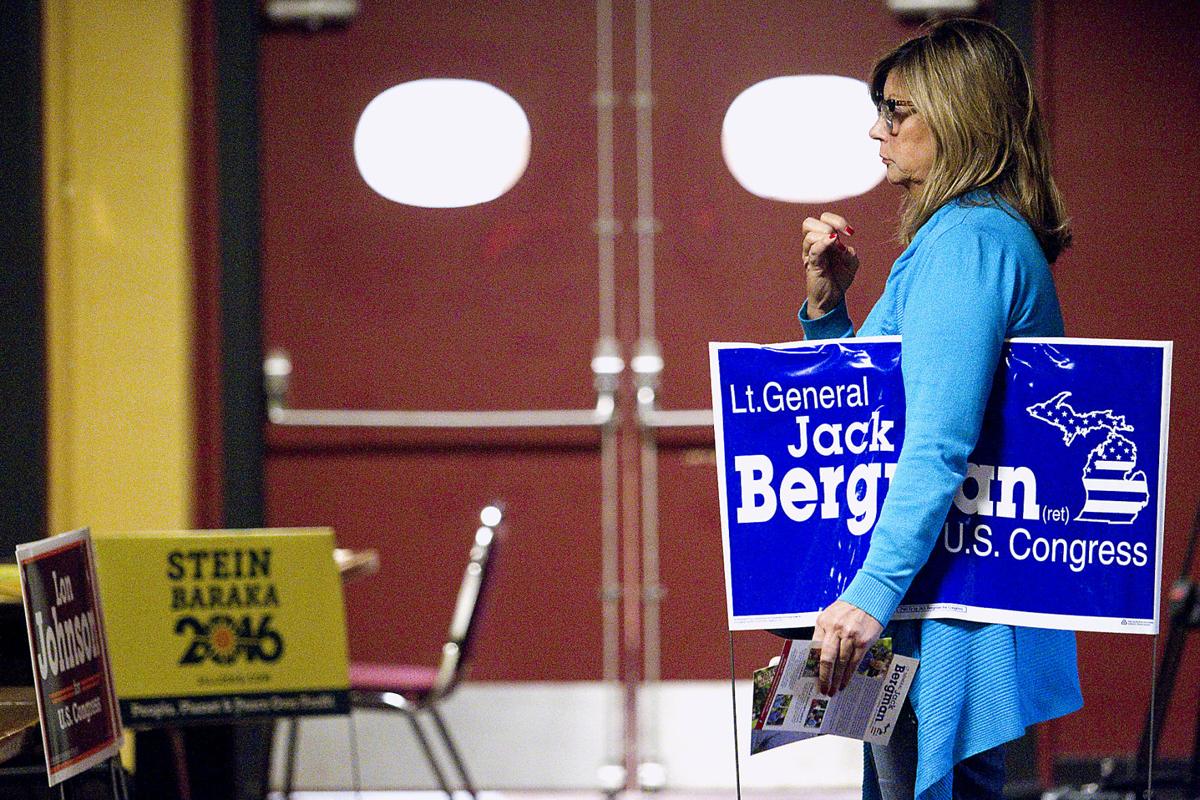 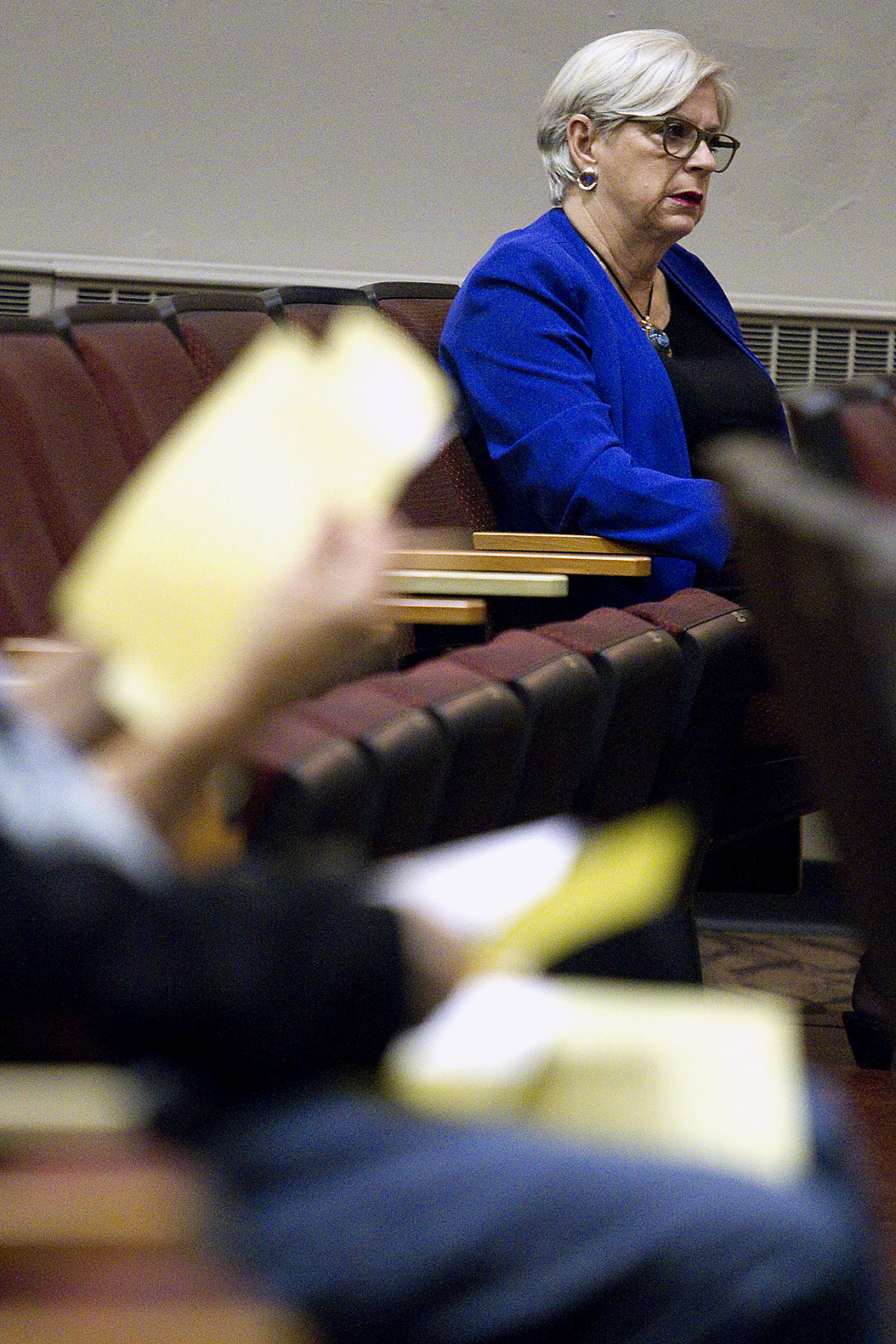 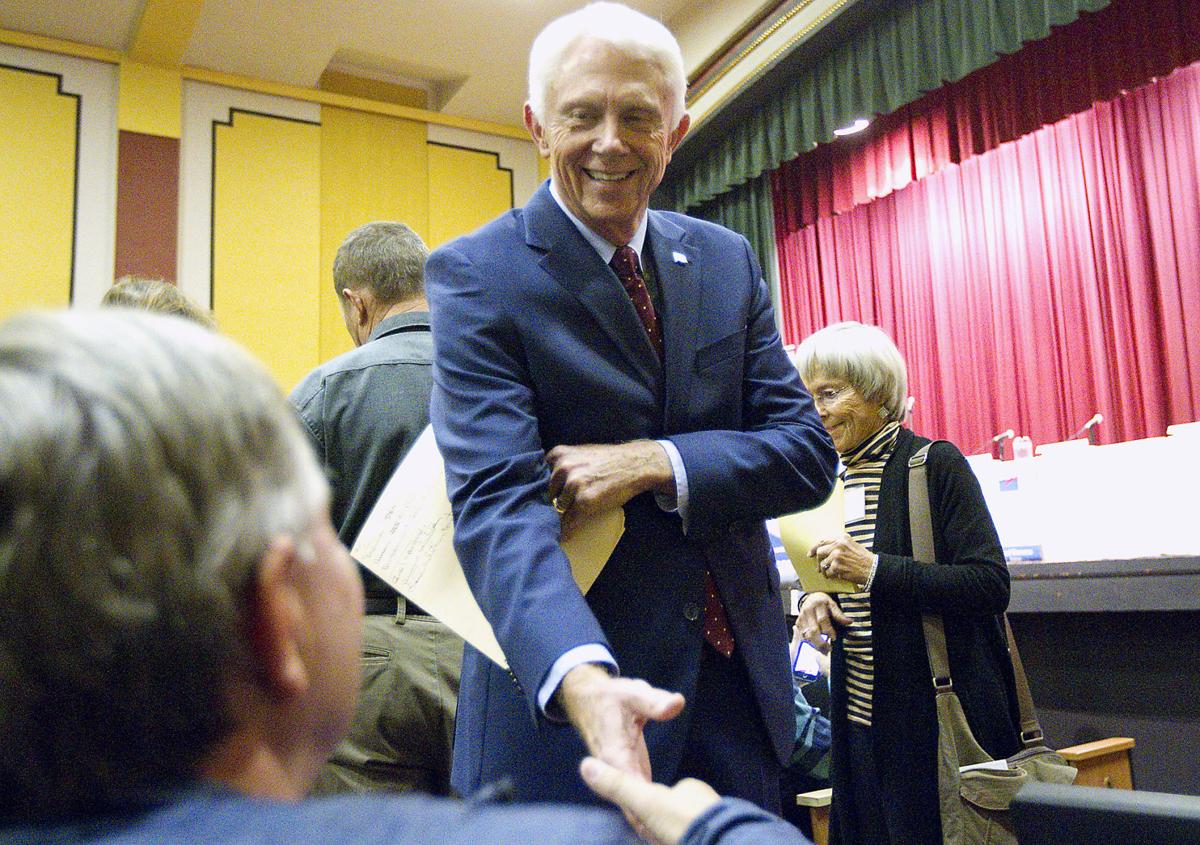 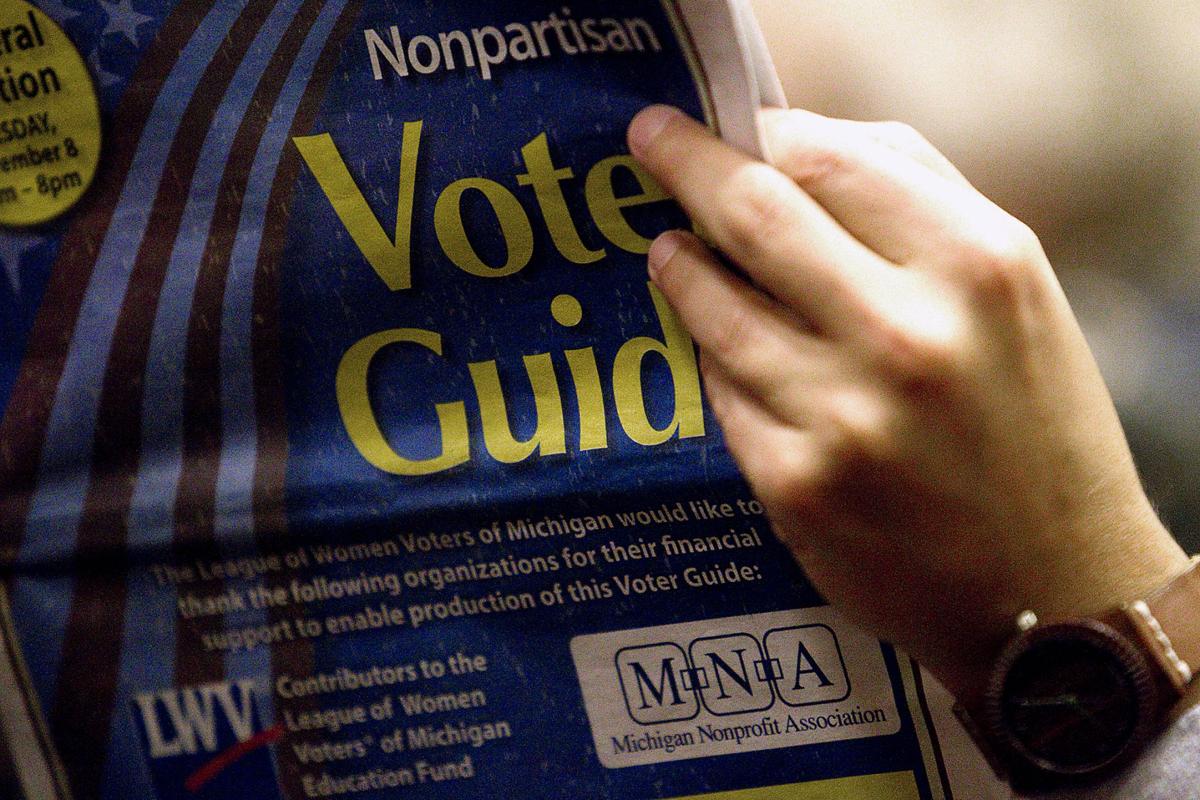 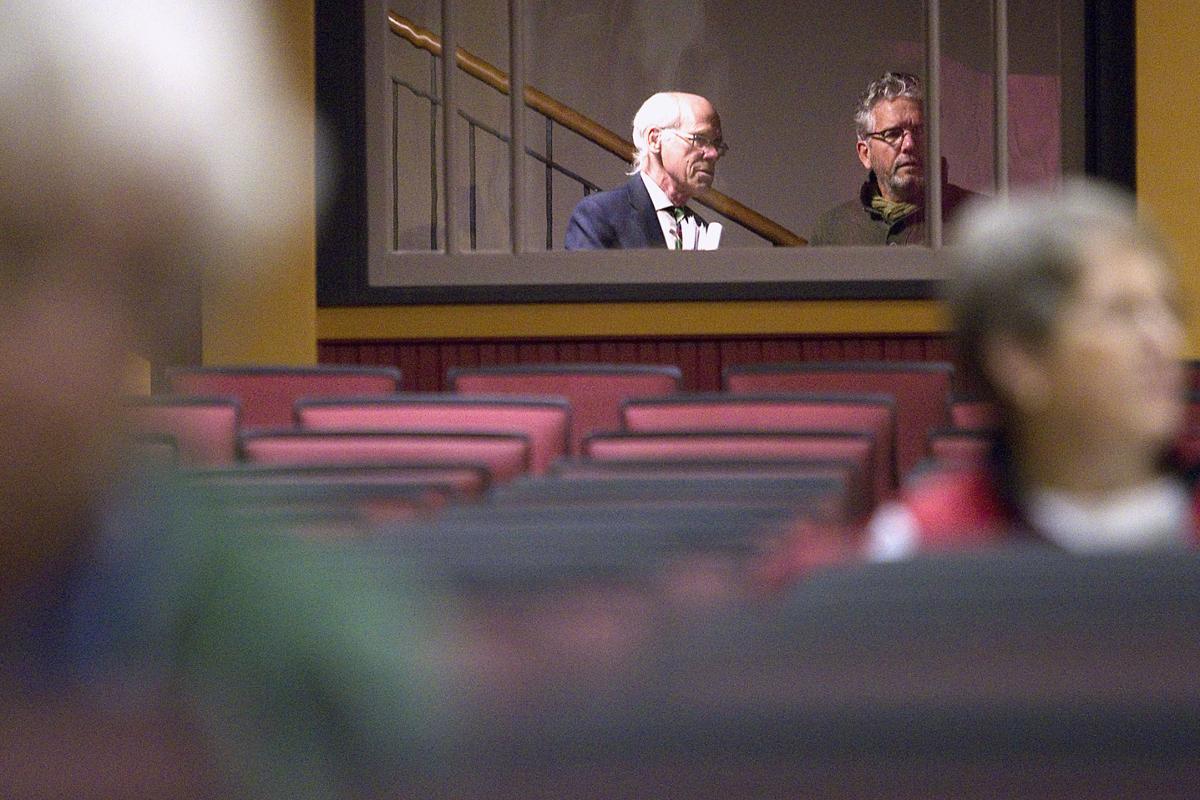 TRAVERSE CITY — Two candidates sat between Democrat Lon Johnson and Republican Jack Bergman but the distance didn’t stop Johnson from lashing out against Bergman’s stances during a public forum for the First Congressional District.

Bostow expressed her frustration late in the event.

“This evening, more than once, a person at this table has referred to his opponent as though Ellis and I didn’t exist. I find that insulting,” she said to the night’s rare applause. “We have been denied access to several meetings such as this during the campaign. I will submit to you, anybody that will campaign dirty, will be dirty in office.”

“I think that showed a lot about them and it will definitely be a consideration in my book,” said Leroi, following the event sponsored by the League of Women Voters Grand Traverse Area and Leelanau County, Traverse City International Affairs Forum, and Interlochen Public Radio.

Johnson argued Bergman plans to privatize Social Security and different healthcare services and resources, including VA hospitals, if he becomes the district’s next representative. Johnson advocated for a VA reform, cutting back on wait times and increasing funding without privatizing such services for veterans.

“We owe them a successful transition into civilian life,” he said.

Bergman expressed the importance of working to make sure Project Cherry Tree — a plan intended to improve access to health care, education, housing and jobs for northern Michigan’s current and future veterans — becomes a reality.

“It has buy-in now at the entry levels for the VA, from Washington D.C., that will provide jobs, housing, healthcare and education for veterans,” Bergman said. “We have a heck of an opportunity here.”

Bostow said she would like to allow veterans access to the health facilities and health resources of their choice.

Boal, a lawyer, admitted he was not well acquainted with the issue, but said he opposes privatization.

Boal said he has considerable knowledge and experience with environmental issues, like hydraulic fracturing, and continues to work on several cases now before the Michigan Court of Appeals.

Aidan Tiernan, 16, of Traverse City, attended the forum for an advanced government class.

“It’s important for people to get out and do this stuff, to start being involved in politics at a young age so you know how you’re nation works and that you are going to be the future of this nation one day,” he said. “You need to realize that and take every opportunity you can to learn how everything works.”

What would you do to protect the Great Lakes and our drinking water?

Ellis Boal: I have three lawsuits against fracking in the Michigan Court of Appeals right now. I filed briefs in two of those cases in the last couple of weeks. I’m involved under Michigan to ban horizontal fracking throughout the state. Shut down Line 5: Don’t allow oil or gas or anything that comes across Line 5 across the (Mackinac) Straits. Perhaps allow some of the propane to be off-loaded in the Upper Peninsula. Those are the two big things that come to mind for me.

Jack Bergman: Anything, I don’t care whether it’s emissions, whether it’s pipelines, whether it’s invasive species, anything that is going to negatively affect the water has to be taken care of, it has to be proactively taken care of on the front end. That involves states working together, that involves some involvement from the federal government but not to the level the (Environmental Protection Agency) tends to get into. We know how to protect our waters here better than Washington knows how to protect our waters here. We are responsible, it’s our backyard, we will keep it clean and we will keep it beautiful.

Lon Johnson: Number one; We need to keep invasive species out. Two; We need to ban horizontal hydraulic fracturing until it is deemed to be safe. Third; We need to shut down Line 5. This is a 63-year-old oil pipeline running through the Straits of Mackinac that has not been independently inspected. I’m not opposed to oil, I’m not opposed to pipelines, pipelines are the safest way to move oil, however there are smart places to put a pipeline and there are not so smart places to put a pipeline. We are being told this pipeline is safe by the very same people who are responsible for the largest inland oil disaster in the history of the United States, right in the Kalamazoo River in 2010 and the very same government officials who told us the Flint water was safe. We need to shut (Line 5) down, run an independent inspection, and work with the governor’s task force to find different ways, different pipeline routes to route this oil.

Diane Bostow: In my part of the world, I find Lake Superior the thing that people mention the most often to me is seepage from abandoned mines, I don’t mean ones that got abandoned last week, but also centuries of abandoned mines. I would like to focus attention on that. I think of all the things we have to worry about in terms of maintenance in the state, (Line 5) is very near the bottom. I think it is being well taken care of and the people down the line from that would suffer greatly if we simply shut it down. A shut-down pipeline is a dangerous pipeline.

Republican Jack Bergman, 69, of Watersmeet, served in the U.S. Marine Corps and became a three-star general during his service, according to information listed on his website. He lived in locations across the country during his military career, before moving to Watersmeet in 1998. He started two start-up medical equipment businesses and also worked as a pilot for Northwest Airlines.

Green Party candidate Ellis Boal, 72, moved to Charlevoix in 2000 after growing up in a Chicago suburb while spending time in northern Michigan during the summer. He graduated from high school in Winnetka, Ill., and earned a degree in mathematics from Bowdoin College, and attended additional institutions before completing law school at Wayne State University in 1973. He worked as a lawyer in Detroit for 30 years before moving to Charlevoix where he specializes mostly in environmental law. He previously ran for congress and other offices several times.

Libertarian Diane Bostow, of Gwinn, graduated from Western Michigan University with degrees in psychology and English, before accepting a teaching position at Waterford Kettering High School, according to her campaign website. She later helped other teachers learn to teach economics at the University of South Florida. Some of her recent work includes home construction contracting and serving as an entrepreneur in different areas —including a Tampa yacht charter business.

Democrat Lon Johnson, 45, of Kalkaska County, graduated from Arizona State University with a degree in political science and continues a political career including serving as the chairperson for Michigan’s Democratic Party from 2013-2015 and work for the Democratic National Committee, Democratic Senatorial Campaign Committee, National Democratic Institute and involvement with Rep. John Dingell’s 2002 campaign. He also worked with TVV Capital — a private equity firm, according to information referred to by campaign officials on www.wikipedia.org.