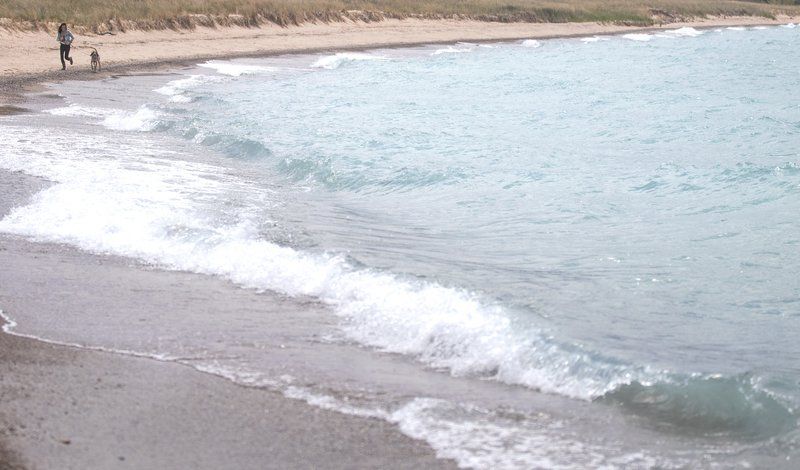 Record-Eagle/Nathan Payne A beach goer runs along the water line on Van's Beach in Leland a few days before the holiday weekend kickoff for the summer season.

Record-Eagle/Nathan PayneBeachgoers will flock to Van’s Beach in the coming months near Leland. A community-wide effort to prevent drownings in local waters launched in 2012 after Brian Rolston, then 16, died after being caught in a rip current. 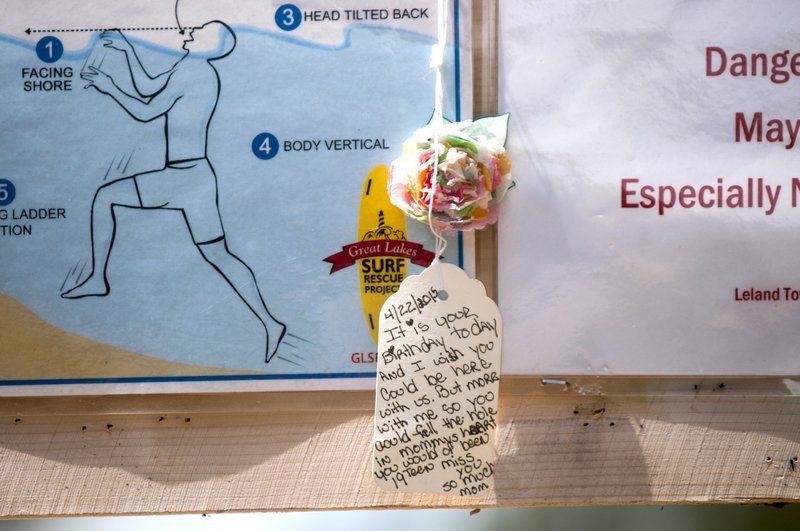 Record-Eagle/Nathan Payne A note to Brian Rolston from his mom, Jeri, hangs on the bulletin board posted near the entrance to Van's Beach in Leland. 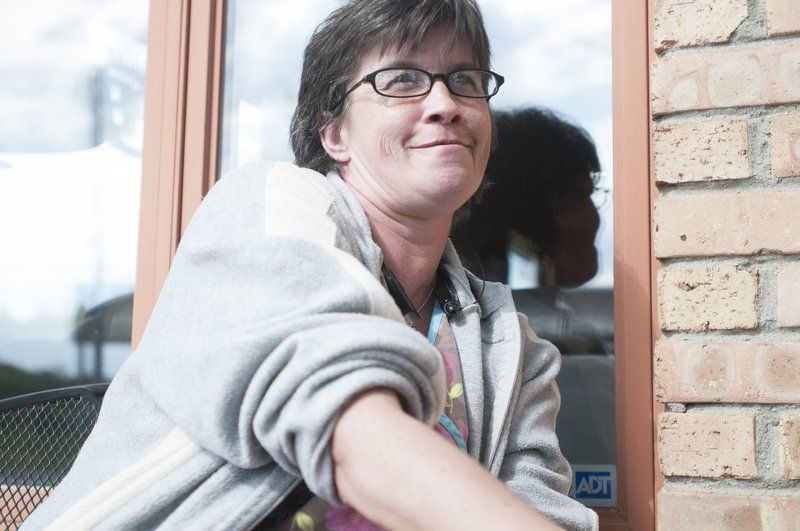 Record-Eagle/Nathan PayneJeri Rolston struggles every day with the loss of her son, Brian, who drowned in a rip current off a Leland beach in 2012.

Record-Eagle/Nathan Payne A beach goer runs along the water line on Van's Beach in Leland a few days before the holiday weekend kickoff for the summer season.

Record-Eagle/Nathan PayneBeachgoers will flock to Van’s Beach in the coming months near Leland. A community-wide effort to prevent drownings in local waters launched in 2012 after Brian Rolston, then 16, died after being caught in a rip current.

Record-Eagle/Nathan Payne A note to Brian Rolston from his mom, Jeri, hangs on the bulletin board posted near the entrance to Van's Beach in Leland.

Record-Eagle/Nathan PayneJeri Rolston struggles every day with the loss of her son, Brian, who drowned in a rip current off a Leland beach in 2012.

LELAND — Jeri Rolston’s words flag in the crisp onshore breeze funneling from Van’s Beach up the narrow path toward a nearby parking lot.

Her message, written on a small card dangling from a handmade paper flower, flaps unnoticed by most beach towel-toting passersby as they flip-flop their way to the aquamarine waters just a few feet down the trail. The birthday message from mother to son, pinned to the sign on April 22, flaps between bulletin boards plastered with warning signs and educational materials promoting vigilance to swimmers who wade the strong currents that form just a few feet from the pristine beach.

Half memorial, half plea, the message is just one ripple left behind in Leland when Brian Rolston, then 16, drowned in the grip of a rip current on Aug. 30, 2012.

Jamie Racklyeft, 51, remembers the day vividly. It’s the day he survived, a day that motivated the communications specialist to devote his skills to keeping others from falling victim to Rolston’s fate.

The long-time seasonal northern Michigan beach-goer decided to spend part of August at his family’s cottage near Leland. A dip in the cool water at Van’s Beach was a must on that 80-degree afternoon.

”The waves were big and I thought I would go in and play a little bit,” Racklyeft said. “I was having the time of my life. ... After a while I noticed I was in up to my chest.”

He tried to walk toward the shore to the safety of shallower water. But a strong current, water quickly funneling through a gap in the sandbar toward deeper water, pulled at him like blue quicksand. Each step forward moonwalked him deeper into the rushing current.

”I realized ‘this is one of those rip currents they used to talk about on ‘Baywatch,’” he said. “I just kind of lost orientation because the waves were so big. I got in this rhythm of getting knocked down and getting back up.”

Racklyeft flipped to his back and began to try to kick perpendicular to the flow, groping for calmer water. He gulped for breath between waves and struggled to shout for help. But exhaustion quickly replaced panic and Racklyeft realized he might be fighting a futile battle.

”I was just exhausted,” he said. “I started thinking about my family and my friends. I thought, ‘I’m going to just take a breath and go underwater and hope it’s quick and painless.’”

A blur of darkness, muffled voices and the warm sand of Van’s Beach followed. It wasn’t until the rumble and roar of an ambulance ride to Munson Medical Center in Traverse City that Racklyeft realized he was alive. Wondering whether he was dead gave way to questions about who saved his life.

The ambulance crew knew little, just that kayakers fished him from the water and started CPR. They told Racklyeft not to worry about it, the good Samaritans wouldn’t be waiting at the beach for thanks.

”Just pay it forward, that’s what you need to do,” they told him.

It wasn’t until the next day Racklyeft learned he wasn’t the only person the rip current grabbed that day.

”Brian Rolston died in the same rip current I was caught in,” he said. “Business as usual just didn’t feel right. I’m in the communication field. I thought, ‘I could start an awareness campaign.’ Since then I’ve been trying to give back.”

Jason Stowe was having dinner with his wife, enjoying the last weekend before the 2012 school year kicked off when the call came.

Fifteen minutes later the Leland Public Schools superintendent was in Leland Harbor watching his community take one of the hardest hits imaginable. Rolston’s death was a punch in the gut. It shook the small town where weekly waves of tourists flock to nearby Lake Michigan beaches.

“People just don’t realize what power that lake has,” said Stowe, a one-time fifth-grade teacher who remembers Rolston as a kind young man who once sat in his class. “We look at this beautiful body of water out in front of us on a daily basis and we realized, ‘our children are not prepared to deal with it.’”

”It was kind of a wake-up call,” said Susan Och, a Leland Parks and Recreation commissioner and former township commissioner. “This wasn’t somebody who had never seen Lake Michigan. This was a good swimmer who had been swimming at that beach most of his life.”

Park officials quickly placed lockers filled with life-saving equipment and educational signs at the beach. Community and school leaders enlisted the help of the Great Lakes Surf Rescue Project to help educate students, firefighters, first responders — anybody who would listen.

The GLSRP made its first presentation to students at Leland Public Schools in the spring of 2013. Those presentations continued Friday when the organization hosted sessions for school students and community members on how to survive a rip current.

”You don’t need to have a lot of skills, you just need to know what to do,” Och said. “If you are swimming against the current, you are effectively drowning, it will just take longer. Michael Phelps can’t swim that fast.”

”Drowning is the leading cause of accidental death in the United States,” said Dave Benjamin, executive director of GLSRP and a drowning survivor himself. “Many people simply don’t know what drowning looks like. Learning how to swim greatly increases your survivability but you need to know how to survive.”

Some small coastal communities, for fear of liability, have been reluctant to post warnings on beaches or place rescue aids. But a bill working its way through the Michigan Legislature that would shield municipalities from liability could motivate more towns to follow Leland’s lead, Racklyeft said.

There hasn’t been a drowning in the water off Leland since Rolston’s death, and officials hope that education and vigilance keeps it that way.

”It’s hard to say this early, but I know they will make a difference,” Stowe said.

Jeri Rolston will never forget the last words she spoke to her son, the usual reminders from a doting mother.

Jeri parted with Brian, her youngest child and only son, not knowing it would be the last time. She didn’t worry too much because he was a strong kid — beginning to prepare for a career in the military — who spent summers since age 2 frequenting the area beaches.

He headed to the beach that day to enjoy one last hurrah with his older sisters and some friends before school began the next week. The next call Jeri received was from her daughter who said Brian was missing. Today the emotional wounds are beginning to heal, although they’re never far below the surface.

”I go down to the beach on every holiday or when I’m having a bad day,” she said. “It feels like it just happened yesterday, you’re just not crying any more. You learn to live with it.”

”Don’t ever think it can’t happen to you,” she said.

Go to glsrp.org or www.facebook.com/DangerousCurrents for more information about water safety in the Great Lakes.