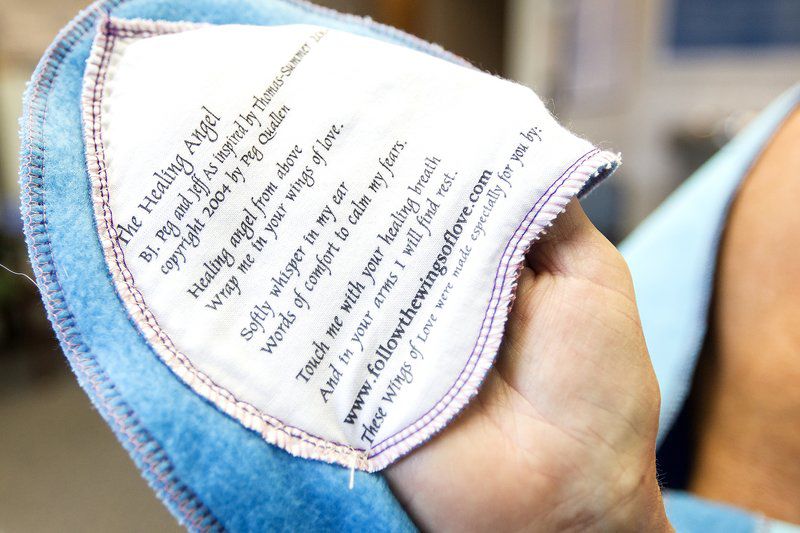 Record-Eagle/Tessa LightyAn inscription is sewn into each handmade shawl, written by the Wings of Love creator Peg Quallen. 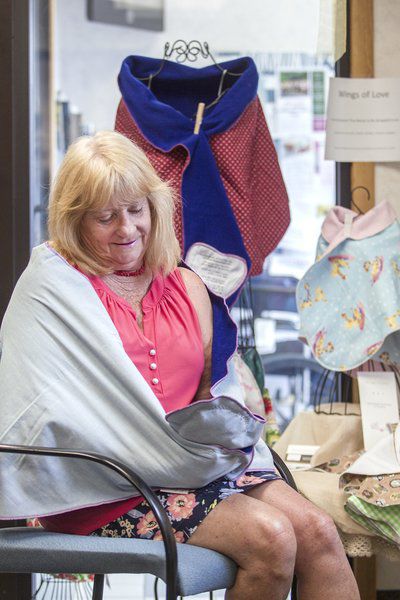 Record-Eagle/Tessa LightySharon Geisler, Wings of Love coordinator and facilitator for Empire Area Community Center, reads the inscription on a Wings of Love shawl. The shawls are kept at Empire Family Care for patients who need support.

Record-Eagle/Tessa LightyAn inscription is sewn into each handmade shawl, written by the Wings of Love creator Peg Quallen.

Record-Eagle/Tessa LightySharon Geisler, Wings of Love coordinator and facilitator for Empire Area Community Center, reads the inscription on a Wings of Love shawl. The shawls are kept at Empire Family Care for patients who need support.

EMPIRE — Peg Quallen gave her first wing-shaped, handmade shawl to her longtime friend Sharon Geisler, who moved from Ohio to Empire in 2012.

Geisler said she asked for one for her sister, and later Quallen made one for her own sister. Those were the first three Wings of Love.

Quallen started the nonprofit Wings of Love in the early 2000s.

“Wings of Love were created through Peg’s inspiration back in 2006 when I was diagnosed with breast cancer,” said Geisler, who has been cancer free for 12 years. “It kept me warm and comfortable through all my chemo.”

Geisler is the local facilitator for Wings of Love. She helps cut the fleece and cotton fabrics before sending them to volunteer seamstresses at the headquarters in the greater Cincinnati area.

She brought the project to the Empire Area Community Center as an outreach program. Though the shawls are geared toward people with health conditions, Geisler said everyone is welcome to them.

“The goal is to distribute these to people who would otherwise not know of them,” she said. “I’m looking to share and spread comfort and love to someone. You don’t have to be sick; you just might be lonely.”

Empire Family Care Physical Therapist Derek Migazzi said the Wings of Love used to be displayed at the township hall, but “it wasn’t always accessible.”

So, Empire Area Community Center members — including Migazzi and Geisler — discussed moving the shawls. Migazzi said they set up the items in the Empire Family Care lobby in April or May.

“People are free to come and look and take one if they need them,” he said. “We want to spread the love. It’s a way to show love and compassion in the community and for people to know there are people that care about them.”

Migazzi said there are a variety of patterns to choose from, and the shawls come in child, youth and adult sizes. Wings of Love also supplies baby bibs, which are available at the heath center.

Geisler added that there are many other uses for Wings of Love. Smaller items work well as dog mats and blankets for premature babies, kids’ baby dolls and seniors’ laps.

“My two doggies have their wings,” she said. “There’s almost no waste because even the smallest of scraps get used.”

The nonprofit has sent 22,586 shawls worldwide since Geisler received hers in 2006. They are distributed across North America and internationally as far as Africa, Australia, France Italy, Germany and Japan.

In addition to Empire area, Geisler delivered shawls to Child and Family Services of Northwestern Michigan in Traverse City.

Geisler stressed that Wings of Love is a patented product, meaning it cannot be mass produced or sold and should always include a message written by Quallen.

However, people may obtain a pattern for individual use. Contact IATwingsoflove@gmail.com to learn more or donate materials.