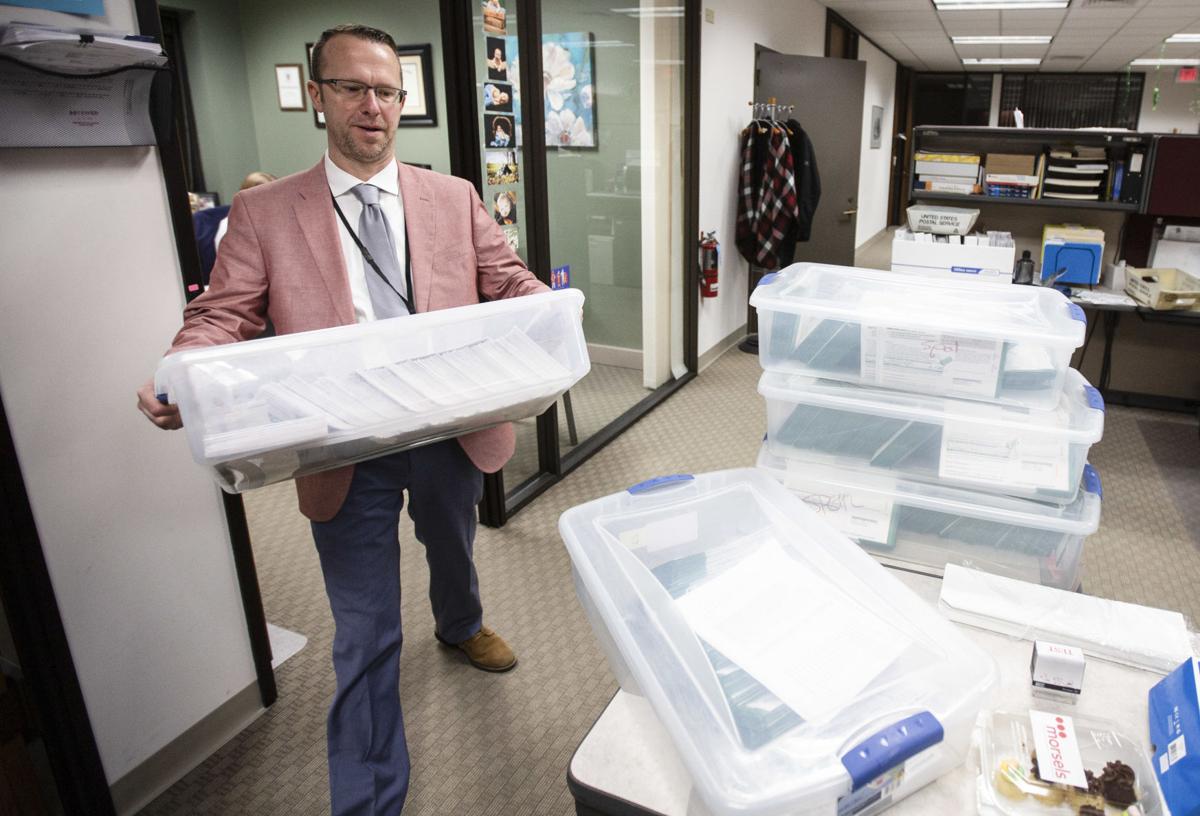 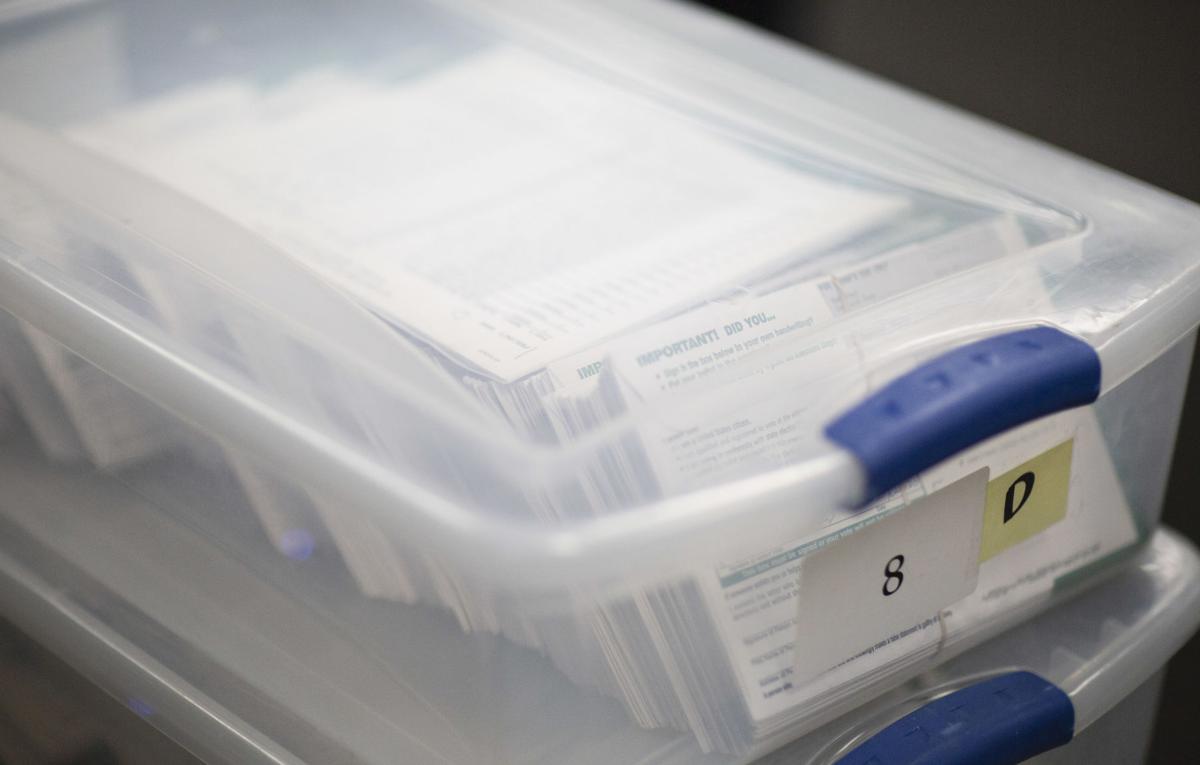 Absentee ballots sit in a container before being counted at the Grand Traverse Governmental Center in Traverse City on Tuesday morning. 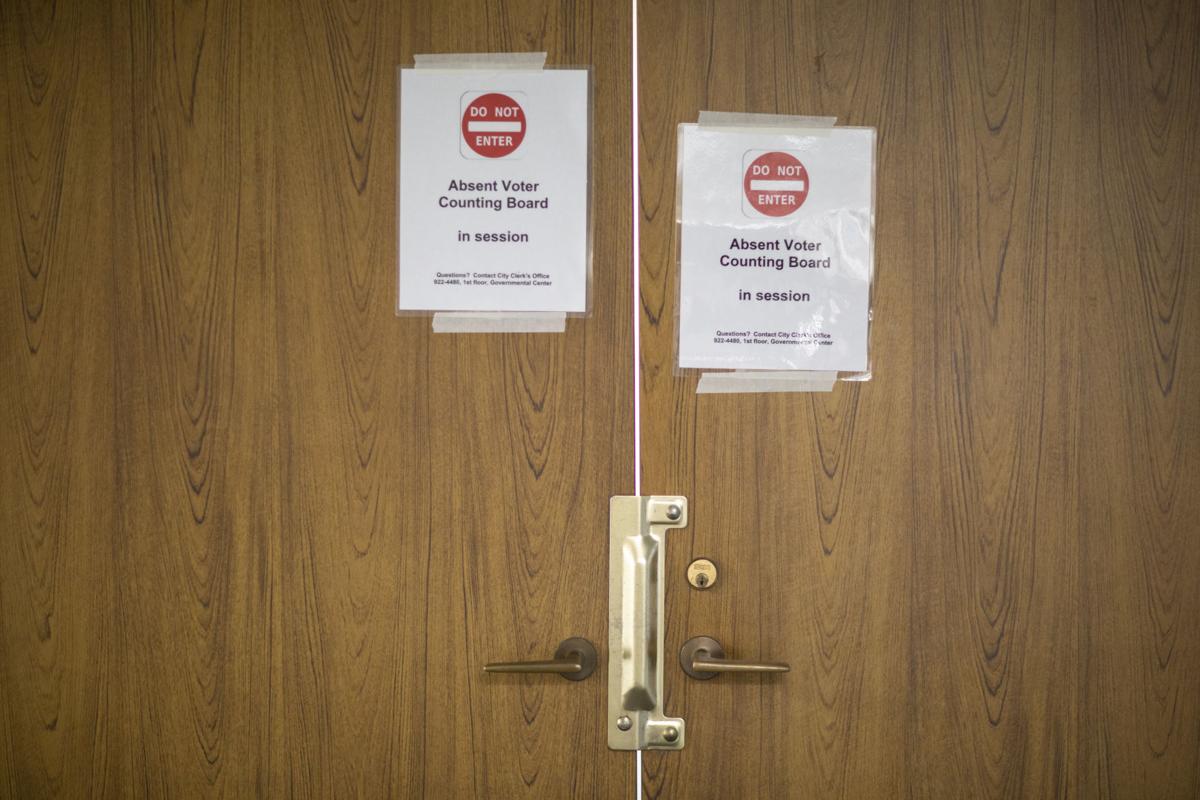 Signs hang on a door at the Grand Traverse Governmental Center in Traverse City on Tuesday morning. Election inspectors are sequestered while they count absentee ballots. 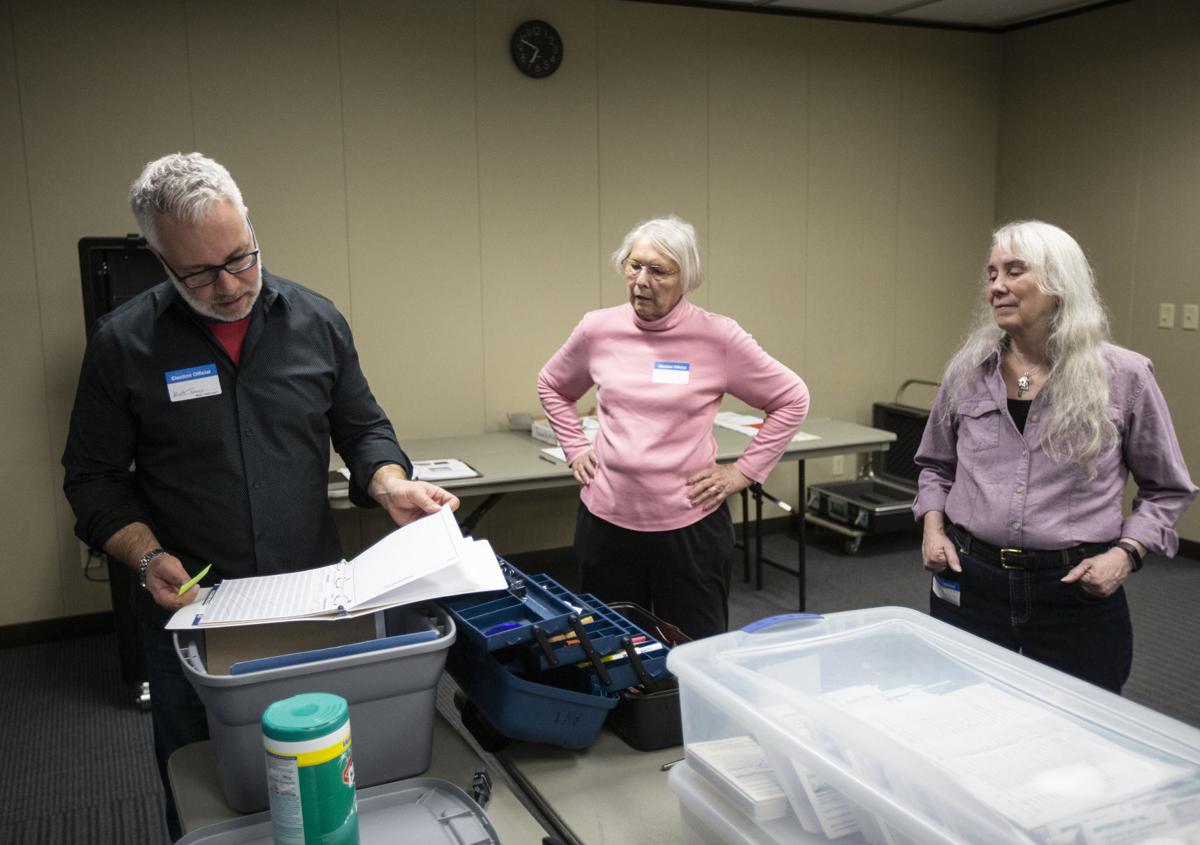 Matt Turner reads from a poll book while Kay Rumbach and Linda Anthony watch at the Grand Traverse Governmental Center in Traverse City on Tuesday morning.

Absentee ballots sit in a container before being counted at the Grand Traverse Governmental Center in Traverse City on Tuesday morning.

Signs hang on a door at the Grand Traverse Governmental Center in Traverse City on Tuesday morning. Election inspectors are sequestered while they count absentee ballots.

Matt Turner reads from a poll book while Kay Rumbach and Linda Anthony watch at the Grand Traverse Governmental Center in Traverse City on Tuesday morning.

Many of the state’s voters cast their ballots from home, with nearly 1 million absentee ballots going out statewide, according to Michigan Department of State figures.

Yet enough votes were counted that Associated Press officials called Michigan for Joe Biden barely more than an hour after polls closed across the state. Expectations were it might have taken much longer for appreciable results.

That’s because Michigan’s voters exercised their expanded rights in the state’s first major election since the approval of a 2018 constitutional amendment that resulted in a surge of early voting, which began Jan. 25.

People who can now cast an absentee ballot without needing an excuse took advantage, submitting 804,000 through Monday — compared with 447,000 at the same point in 2016 when there was a competitive Republican primary.

Grand Traverse County Clerk Bonnie Scheele said she saw an increase in the number of absentee ballots, but not in the overall turnout.

“The precincts didn’t seem overwhelmed,” Scheele said. “They were just kind of steady.”

In Leelanau County Clerk Michelle Crocker saw no spike in absentee voters or in total turnout, which was actually down from the 45 percent seen in 2016.

Crocker said she had extra staff on and everything went smoothly.

“It was busy, but it was all manageable,” Crocker said.

Kalkaska County Clerk Deborah Hill said there were no issues in that county, with all absentee ballot counts in by about 8:45 p.m.

Traverse City voters got a sneak peek at the new absentee ballot policy in November for a city commission race.

“We’re hoping as long as we have no equipment issues like a jam where we would have to recount or things like that, we should hopefully have our results by 11, 11:30 (p.m.),” he said.

The swell of absentee ballots, combined with so many Democratic candidates dropping out — especially since South Carolina and Super Tuesday — led to spikes in the number of voters scratching their ballots and submitting a new one. More than 36,000 ballots in Michigan were “spoiled,” an eight-fold increase over 2016.

The trend is thought to benefit Biden as the party’s more moderate wing consolidates around him. Many states do not allow such do-overs.

State figures show 2,710 Traverse City voters requested an absentee ballot as of Monday, with 2,154 back. Marentette said that represents a 200 percent increase over absentee ballot requests for the 2016 primary. It’s also two-thirds of the turnout for 2016, both absentee and in-person.

Increases were lower elsewhere in the region, with Leelanau County voters requesting 3,600 absentee ballots as of Monday. That’s more than a third of the entire turnout of 8,771 for the 2016 presidential primary.

“Rather than the before-work and lunch-crowd-and-after, it’s given us a steady stream so far,” she said.

Handy said she doubted anyone stayed away from the polls over fears of COVID-19, the novel strain of coronavirus that killed thousands in China and is spreading worldwide.

“Hopefully anybody who was afraid of the coronavirus filed and got an absentee ballot, because this is the first year that people can vote absentee for any reason,” Handy said.

Voter Chrissine Cairns said she was a little worried about the virus, but not enough to keep away from the polls. She found the extra bottle of hand sanitizer by the applications to vote reassuring.

Amanda Danielson, who also voted Tuesday at Precinct 1, said she wasn’t remotely concerned about the virus.

“I think those worries are absurd,” she said.

The Associated Press and Record-Eagle reporter Patti Brandt Burgess contributed to this article.