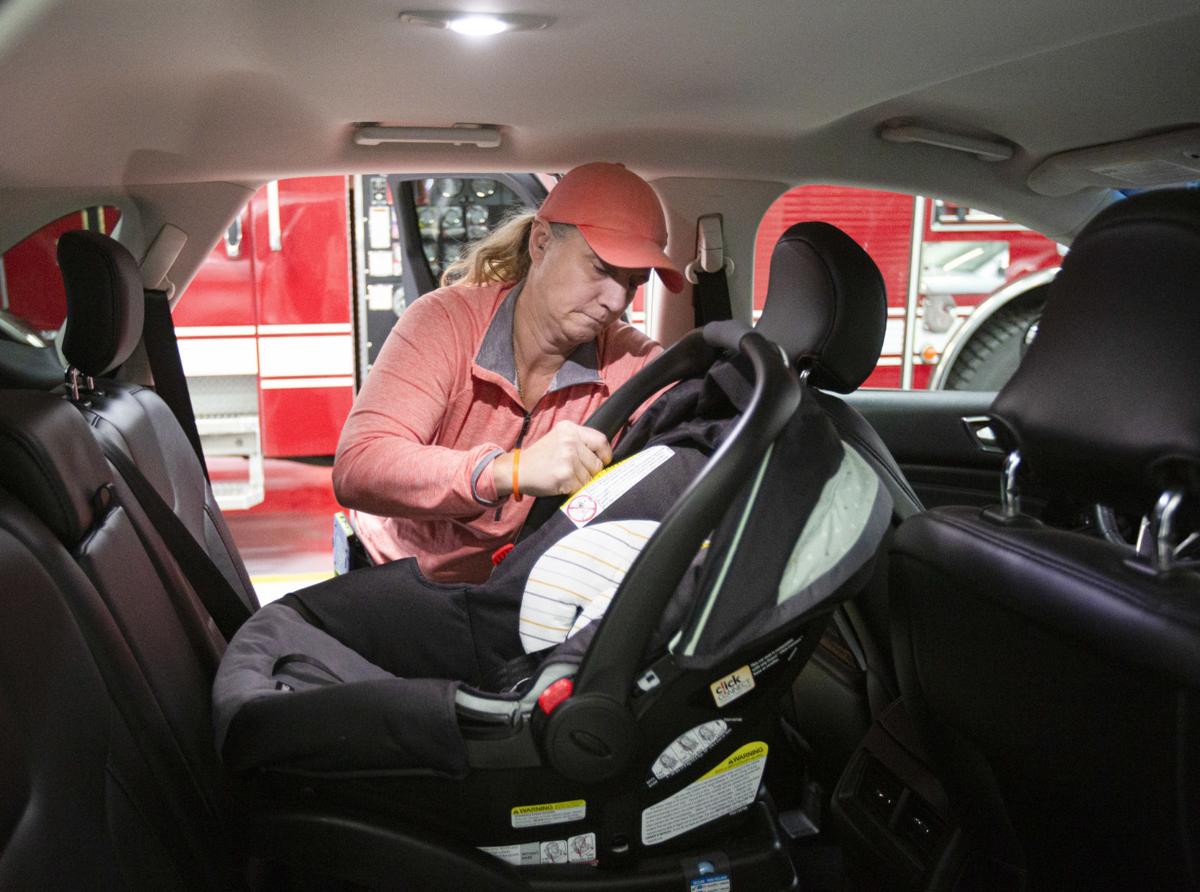 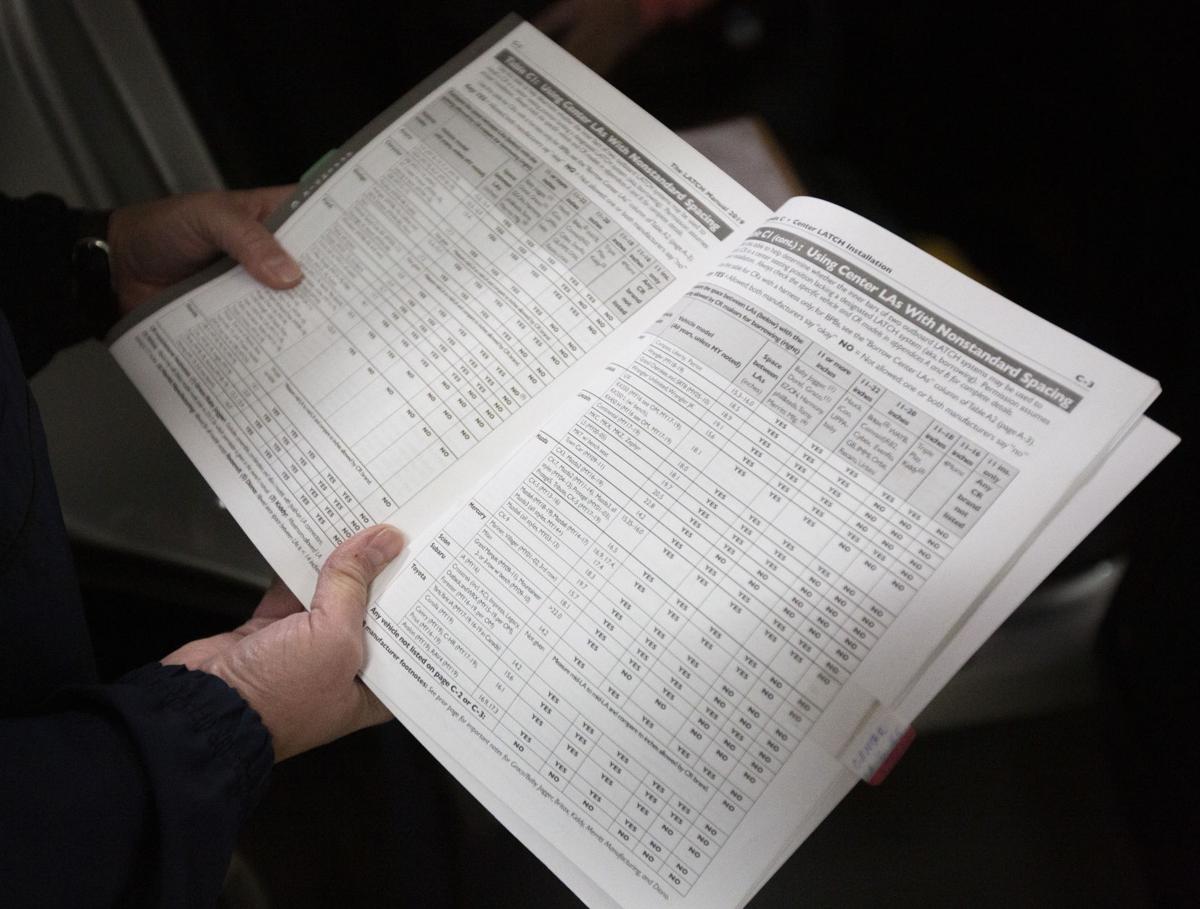 Jennifer Froehlich reads from “The Latch Manual” at Grand Traverse Metro Fire Station 11 in Traverse City on Friday, Oct. 25, 2019. The manual helps technicians install car seats in accordance with tolerances provided by both the seat and car manufacturer. 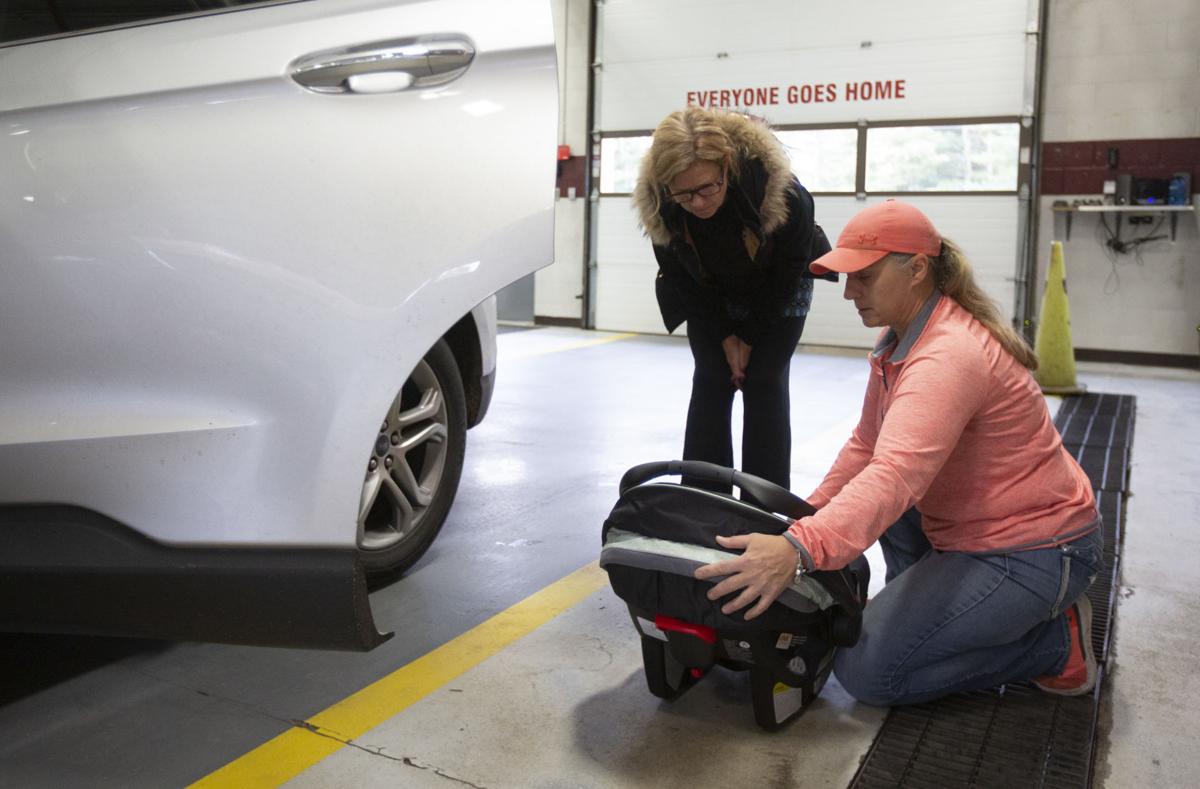 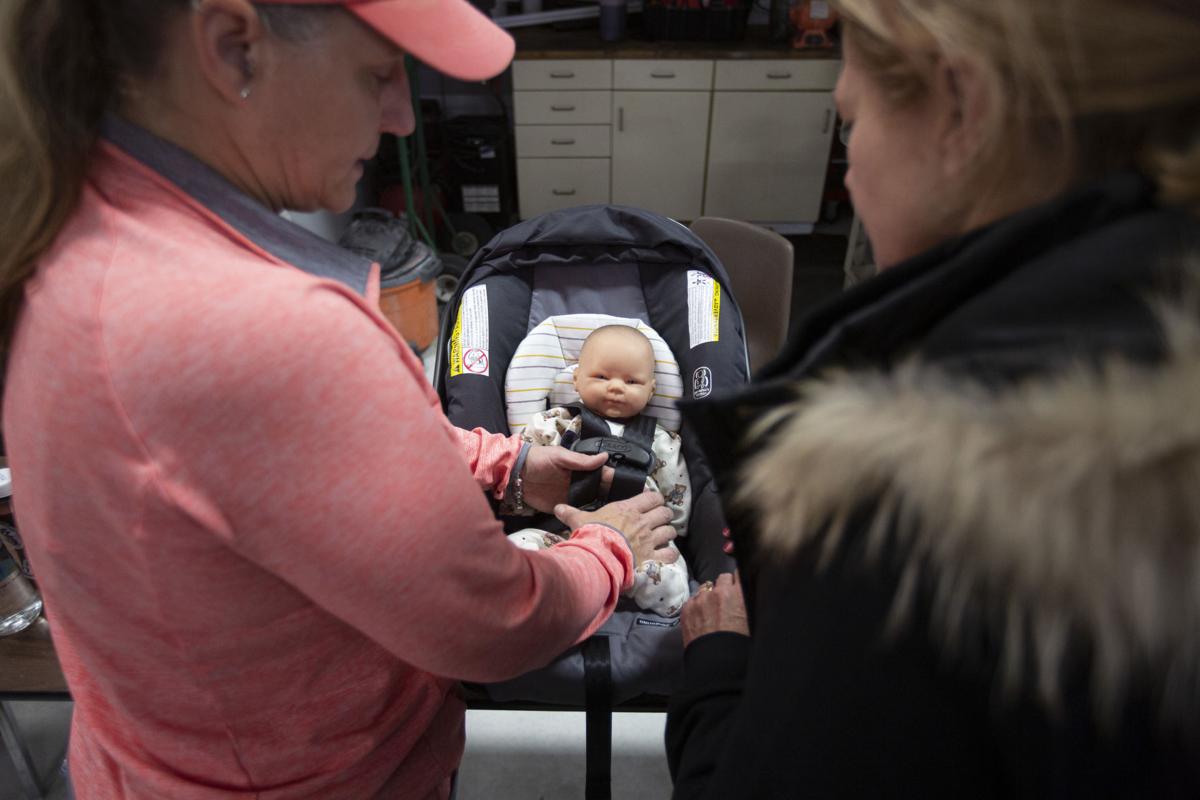 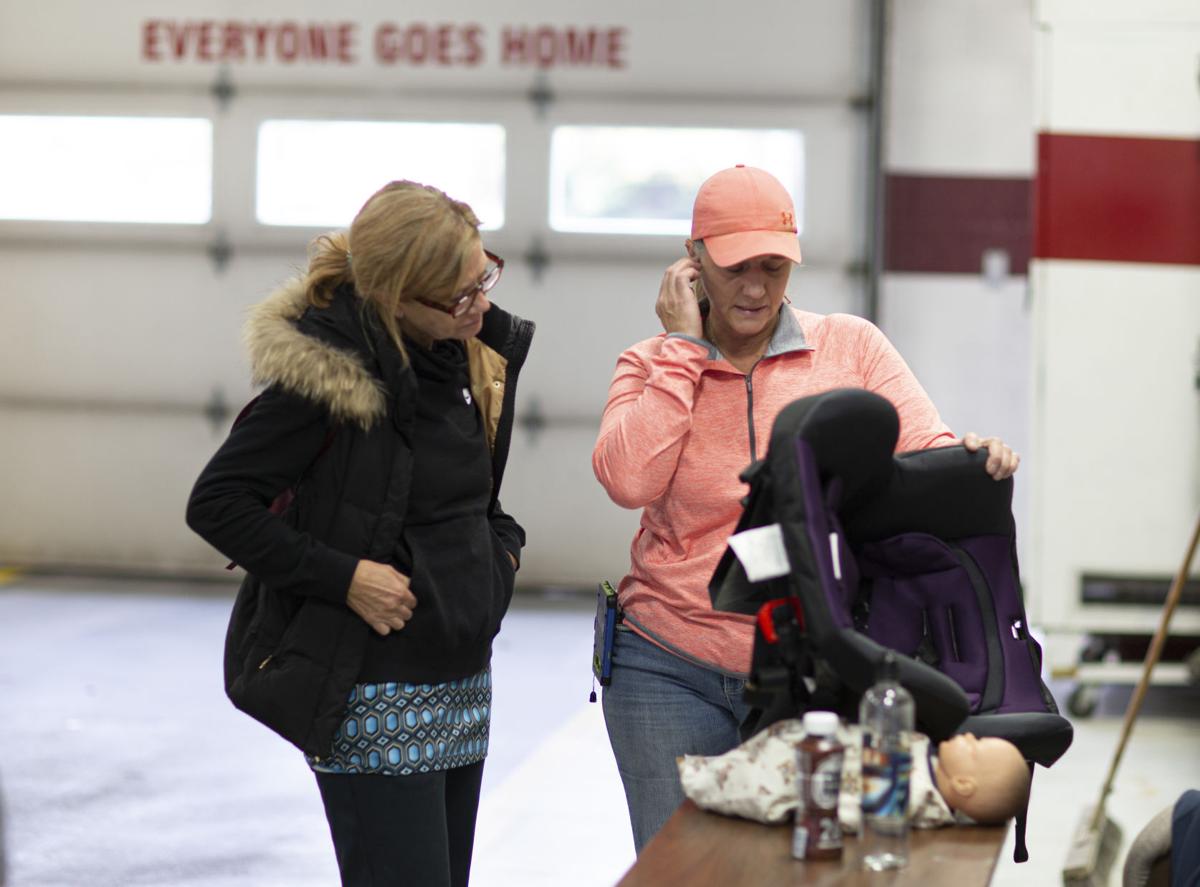 Lisa Birgy, a registered nurse at Munson Medical Center, shows Karrie Waskerwitz how to use a car seat at Grand Traverse Metro Fire Station 11 in Traverse City on Friday, Oct. 25, 2019. 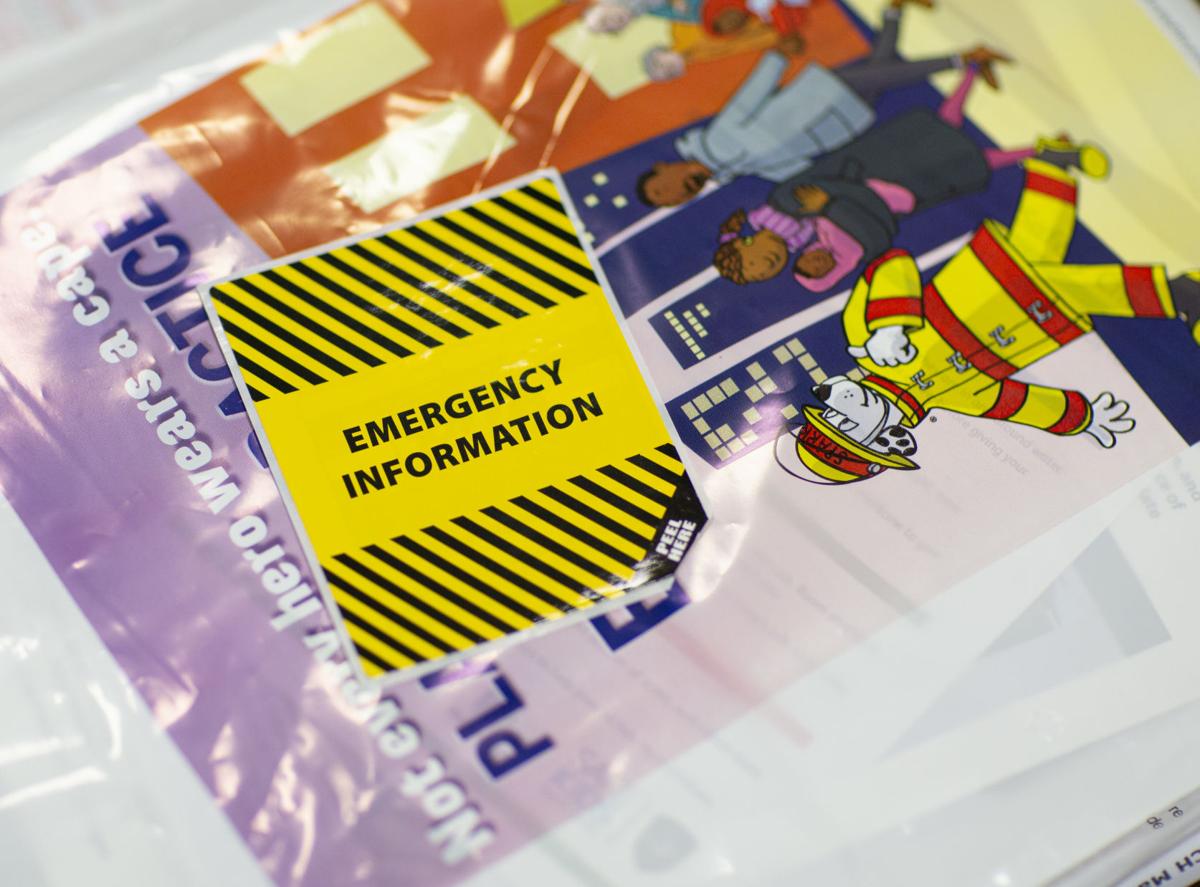 Jennifer Froehlich reads from “The Latch Manual” at Grand Traverse Metro Fire Station 11 in Traverse City on Friday, Oct. 25, 2019. The manual helps technicians install car seats in accordance with tolerances provided by both the seat and car manufacturer.

Lisa Birgy, a registered nurse at Munson Medical Center, shows Karrie Waskerwitz how to use a car seat at Grand Traverse Metro Fire Station 11 in Traverse City on Friday, Oct. 25, 2019.

TRAVERSE CITY — Rich Kerr, of Cedar, said he wasn’t sure he knew how to properly install a car seat before he got help at a car seat check.

“Basically, I was clueless coming into this,” he said.

“I would recommend this to every new parent, even when you’re upgrading to the next size of seat,” Annie Kerr said.

It’s not just for new parents. Karrie Waskerwitz of Traverse City came by the same day because she wanted to be sure her grandson would be safe when riding with Grandma. She passed, and came away feeling confident too. Practices and recommendations have changed since Waskerwitz’s children were young, she said. Now babies are supposed to go in rear-facing car seats.

Waskerwitz was surprised by the thoroughness, and liked that inspectors had a mannequin with which she could practice — the doll is named “Jimmy” in honor of late Blair Township Fire Chief Jim Carroll, a longtime child passenger safety technician, Froehlich said.

Antrim County Sheriff’s Deputy John Morris showed how to fasten the clip that goes across the mannequin’s chest and adjust it so it’s right beneath the child’s armpits.

Station 11 is one of two places where Froehlich, Morris and other technicians routinely do car seat checks. They’re every second and fourth Friday, and Traverse City Fire Department’s Station 2 does them as well.

Rich Kerr said he believed he could properly install and remove his baby’s car seat after technicians showed him and Annie how.

That’s just the point, Froehlich said. She’s the Safe Kids North Shore coordinator, and she and other technicians will ask anyone getting the demonstration to repeat what was just shown to them.

More than seven in 10 car seats are improperly installed, according to the Michigan Office of Highway Safety Planning. That’s an improvement, as once it was nine in 10, Froehlich said.

The most common mistake Froehlich sees is loose harness straps, she said. A baby can be thrown from the seat in a crash if the harnesses aren’t tight enough — The Michigan Office of Highway Safety Planning recommend the “pinch test:” If you can pinch excess harness strap material, it’s too loose.

Bulky jackets can complicate this, and Froehlich said she recommends dressing baby in nothing thicker than a lightweight fleece and covering them with blankets to keep them warm after they’re strapped in.

Chest clips not being high enough is another common mistake, Froehlich said. They should be right at the baby’s armpits, or else there’s too much leeway for the straps to move, creating another ejection hazard.

Properly adjusted chest clips and straps are crucial because babies have flexible shoulders allowing them to pass through the birth canal, Froehlich said. And crashes can involve terrific force: a 10-pound baby in a vehicle moving 50 miles per hour that hits a stationary object is moving with 500 pounds of force, she said — that’s why it’s also important to keep the car clear of things that can turn into projectiles, including toys.

But why is it so common for people to install car seats wrong?

“Not every piece of the puzzle is going to fit,” she said.

Then, there are people who install car seats any way they can, Froehlich said. She’s seen everything from bungee cords to climbing ropes to drilled holes.

Jerry Wojtanowski, a TCFD firefighter paramedic and child passenger safety technician, said he frequently sees parents who have moved their kid up to the next step too soon — front-facing car seat to belt-positioning booster seat before the child is at the right height or weight, for example.

That can be dangerous because a child could be thrown from a seat in a crash if they’re too small for it, Wojtanowski said.

Road injuries are the leading cause of preventable deaths and injuries to U.S. kids, according to Safe Kids Worldwide. And properly used child safety seats can increase crash survival rates up to 71 percent.

Crashes in northern Michigan involving passengers 12 and younger are hardly rare, with 683 in Antrim, Benzie, Grand Traverse, Kalkaska and Leelanau counties from 2014-18, according to reports compiled on Michigan Traffic Crash Facts (the figure includes a handful of crashes involving young pedestrians or cyclists but not passengers).

Froehlich said an improperly installed car seat means there’s a risk of injury or death in a crash. She was approached once by a mother who told her how important it is to educate parents. That mother had lost a child in a crash because the car seat wasn’t installed properly, and she didn’t know.

Froehlich understands that it’s up to parents to make choices with the information she gives them, like where and how to install a car seat. Her top advice is never to assume you’re installing car seats right and find a certified technician who can help.

“We get into this vehicle that weighs thousands of pounds and is heavy steel and drive it at high speed,” she said. “It’s probably the most dangerous thing we do and we do it every day, so make sure you’re doing it right.”

Dunn said she took a few classes that included information on car seats, and Lewis said she wanted to be sure she has the latest information.

“I think it should be mandatory for first-time parents, maybe for all parents,” Dunn said. “I wouldn’t have known any of this stuff.”

Rear-facing car seats: All babies and toddlers should ride in a rear-facing seat until they reach the highest weight or height the seat's manufacturer allows — it's OK if their feet touch the vehicle's seat, as long as they haven't outgrown either limit.

Booster seats: Children who have outgrown the height or weight limits for their forward-facing car seats should use a belt-positioning booster seat until the vehicle's lap-shoulder belt fits them properly. That's typically when the child is 4-feet-9-inches tall at 8-12 years old.

Harness straps aren't tight enough: Straps should be snug on the child's body. If you can pinch any excess strap material, they're too loose.

Car seat isn't installed tightly enough: Car seats should not move one inch from side to side or front to back, whether they're installed with the seat belt or LATCH system, when pulled near the belts.

The chest clip is too low: Secure the chest clip at the child's armpits to be sure the harness straps stay in the right position.

Putting kids in the front seat too early: Children should ride in a vehicle's back seat, if it has one, until they're 13 years old. Air bags can be dangerous to children younger than this, and buckling up in the back seat decreases the risk of death by one-third.

Find child passenger safety technicians and their contact info in your county here:

https://is.gd/CPStechs (Enter "Michigan" for state, then search your county name.)