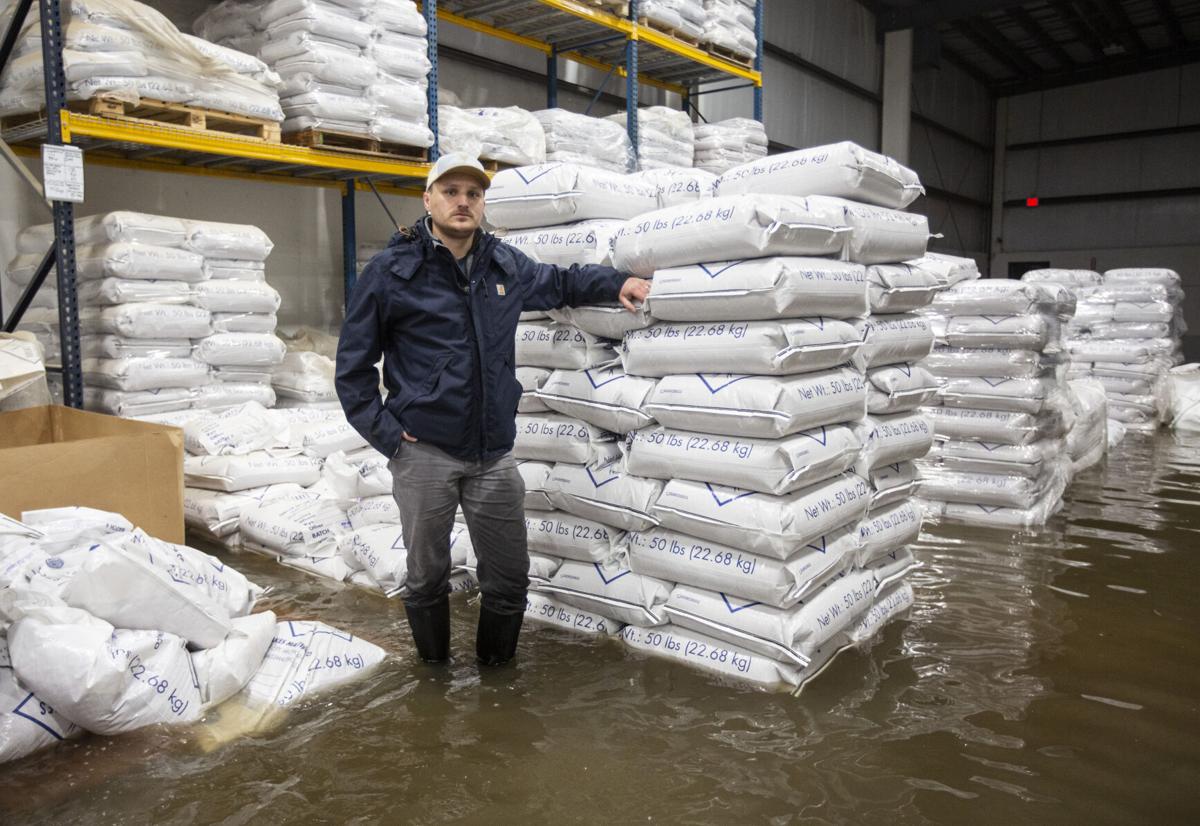 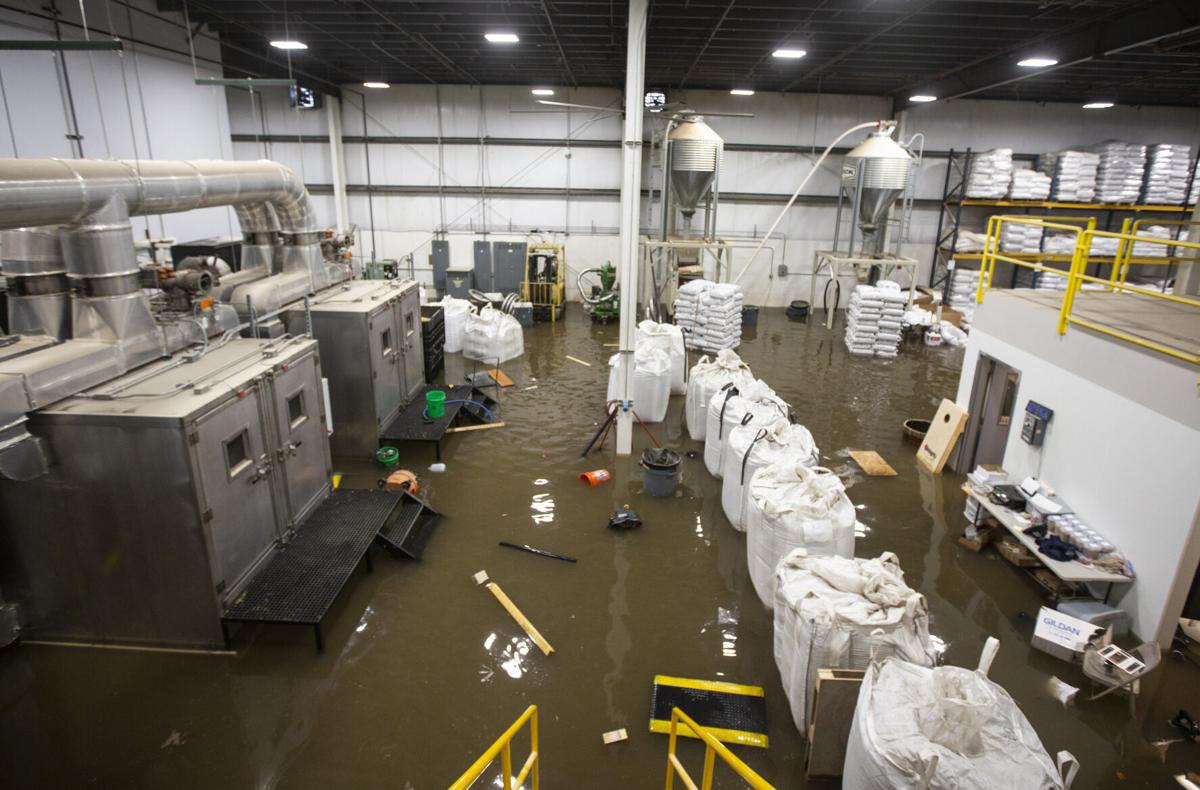 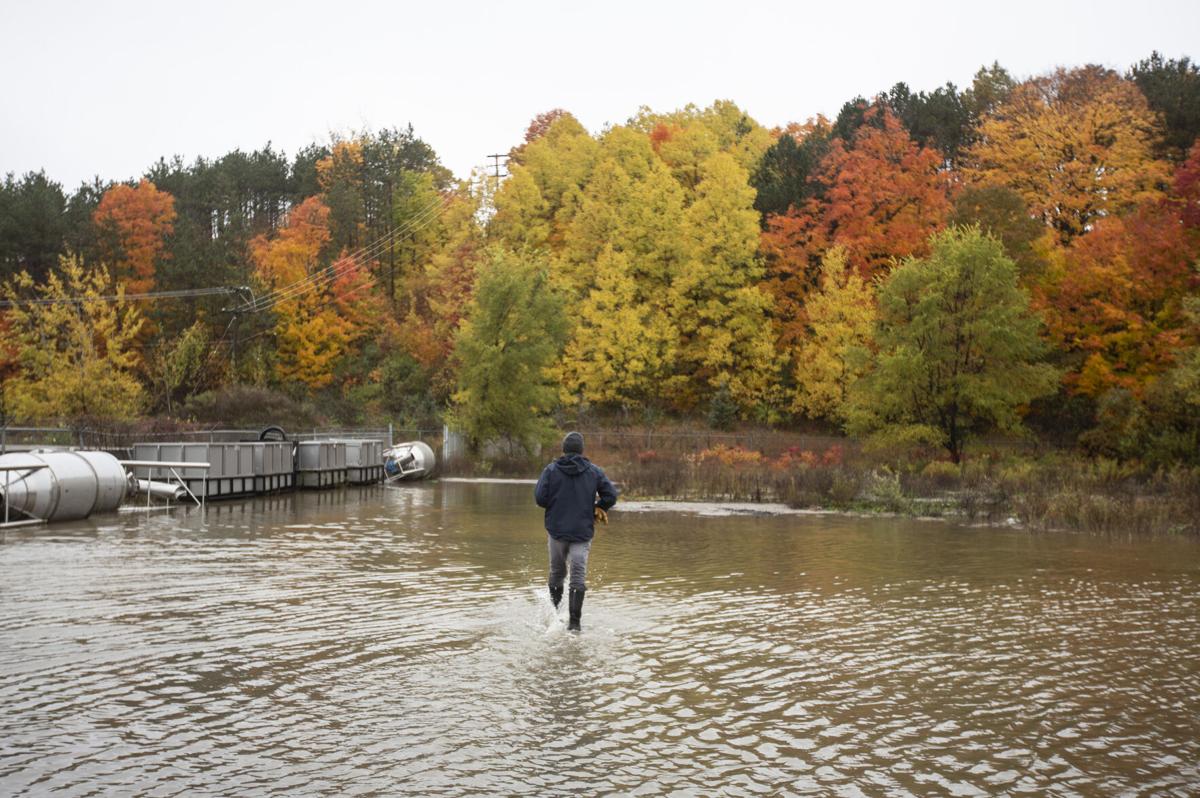 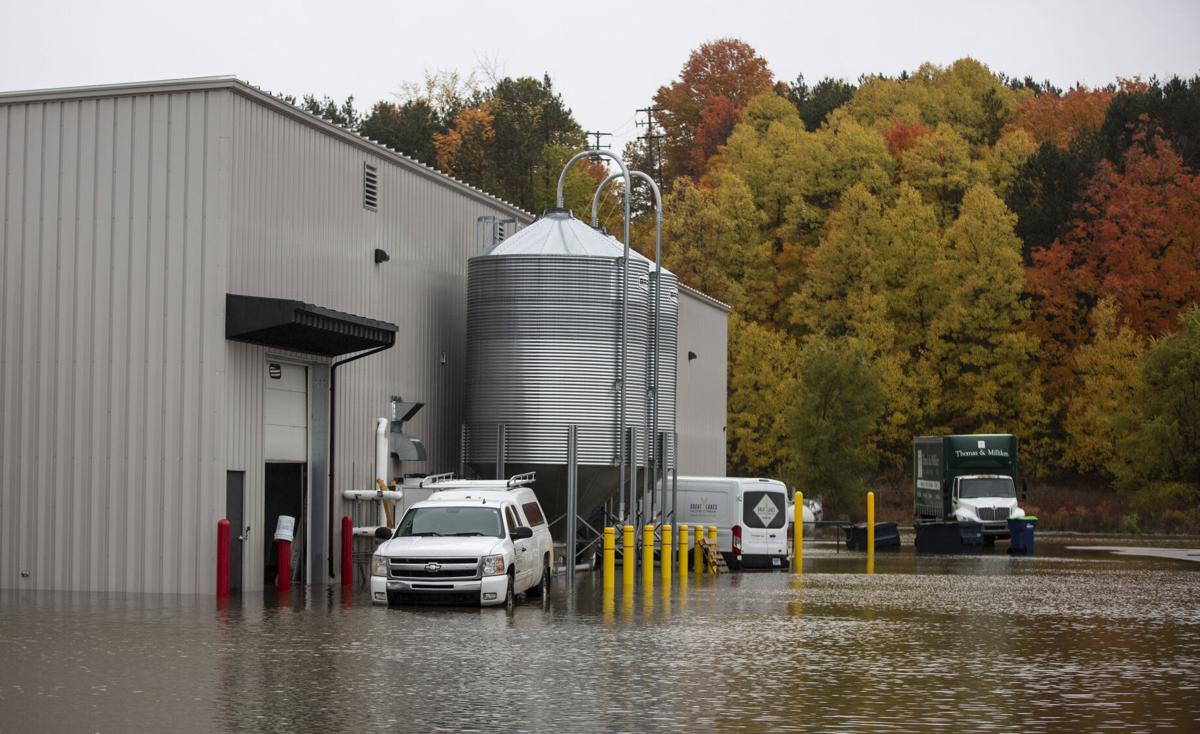 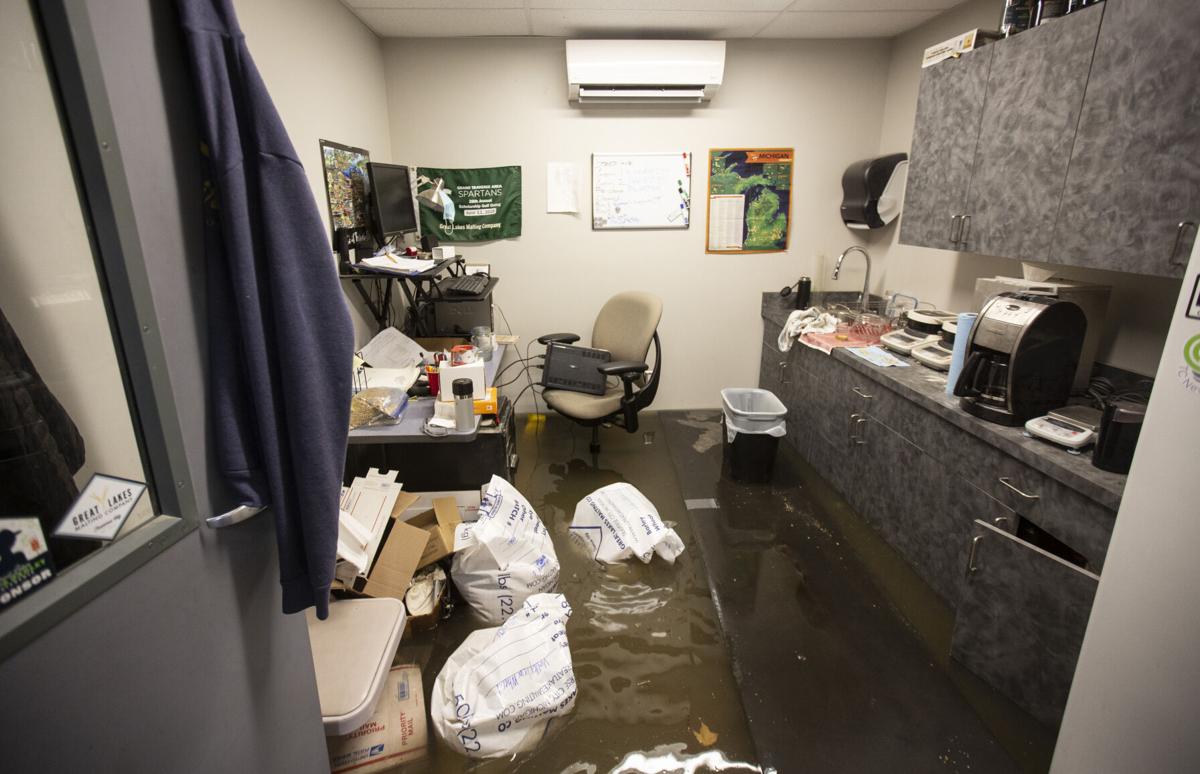 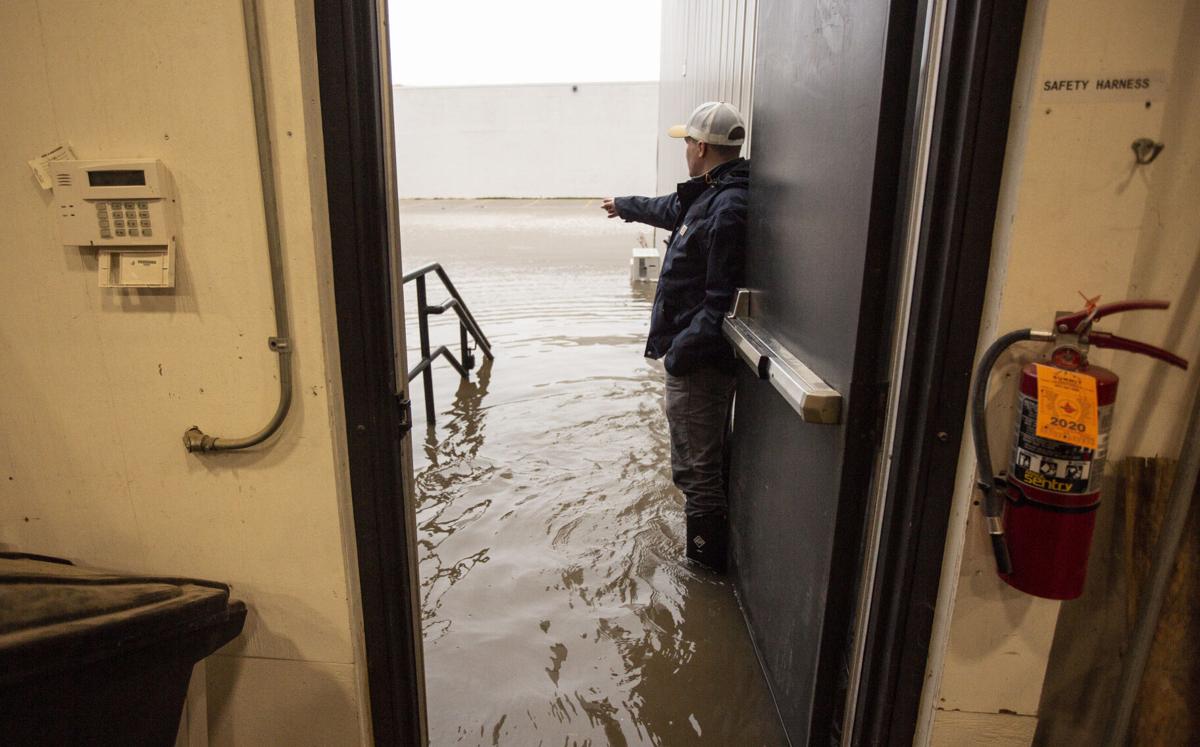 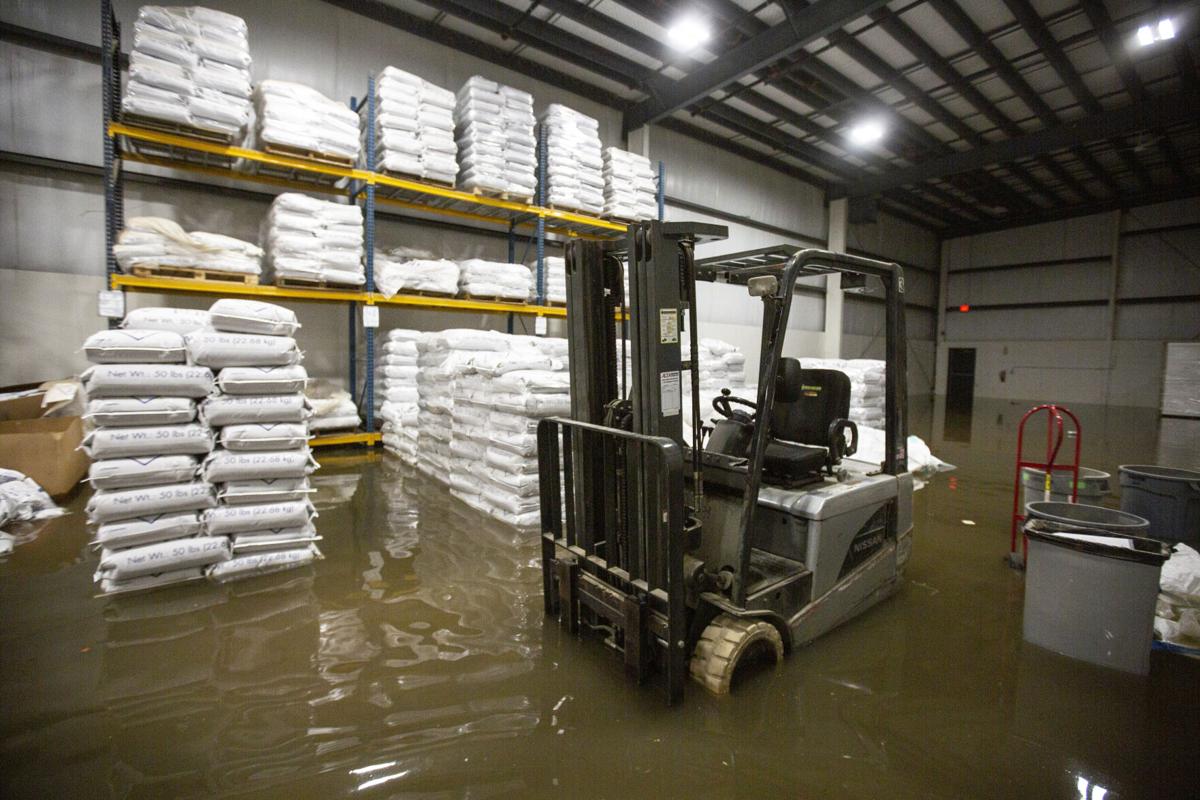 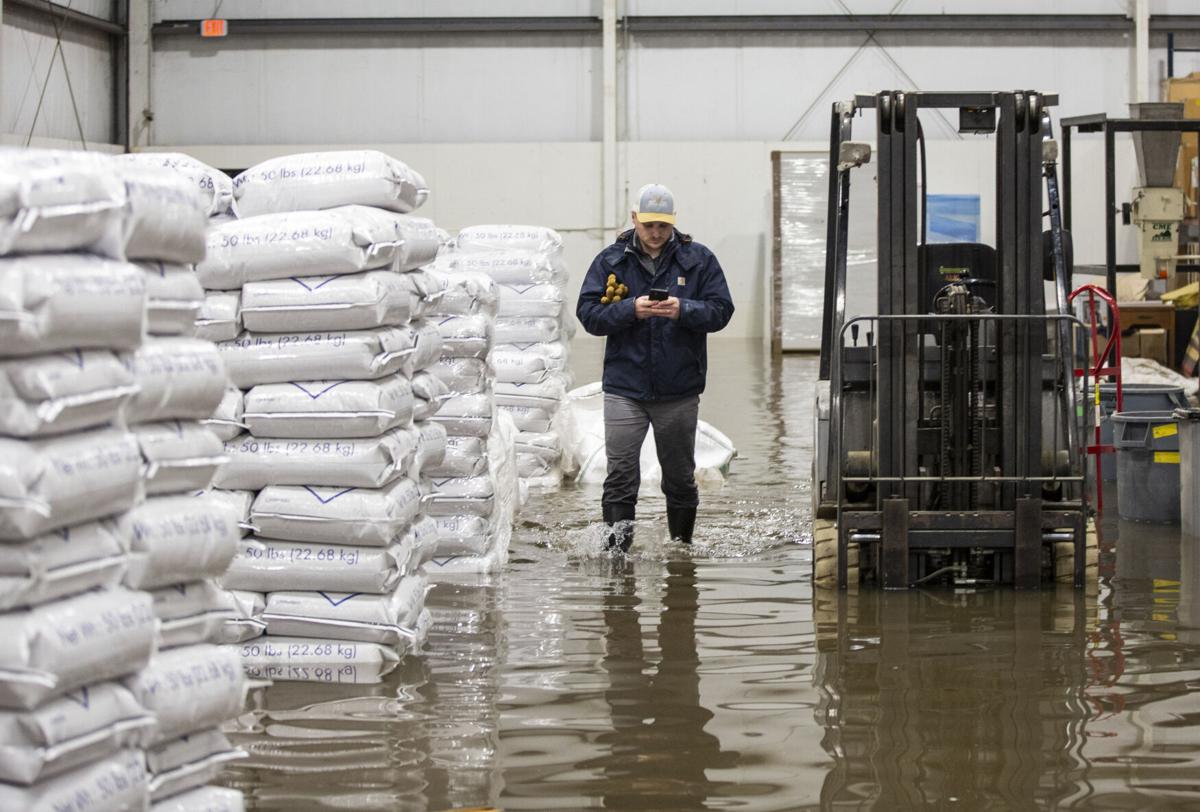 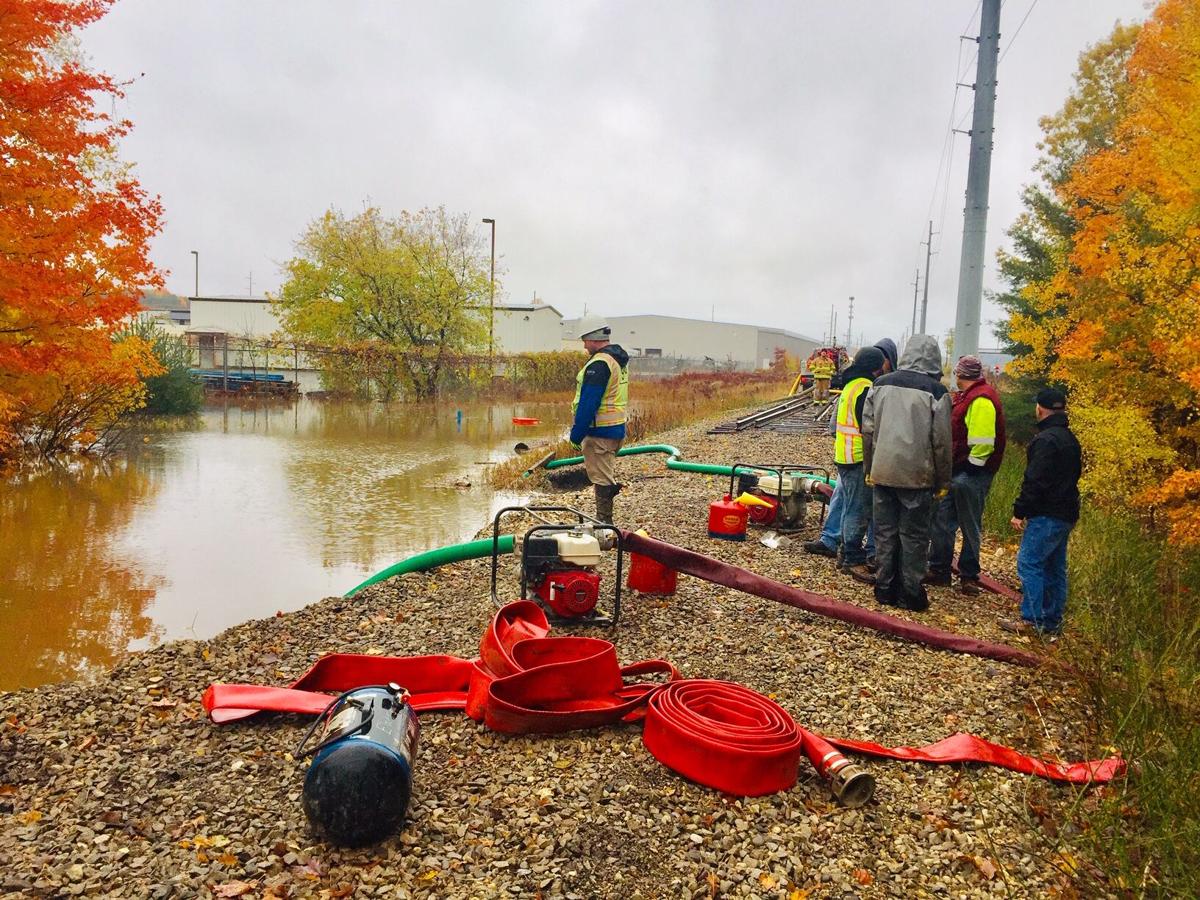 Workers and officials gather along the railroad track above Miller Creek Friday afternoon to pump storm water away from the railroad bed and into the creek.

Workers and officials gather along the railroad track above Miller Creek Friday afternoon to pump storm water away from the railroad bed and into the creek.

Friday morning the building was a foot underwater. And Malkiewicz was steamed.

“This issue has been well known to current and former county commissioners — and to drain commissioners — for years,” Malkiewicz said. “Our property is ground zero for floodwaters during storm events like this and I’d like to know when something is going to be done.”

Across Cass Road and a half-mile to the south, the parking lots, wooded areas and gravel driveways were also flooded.

County Commissioner Ron Clous, who has made the Cass Road Drain a pet project during his three terms in office, pointed down the hill toward a partially clogged culvert.

“It’s a lack of maintenance, that’s what this is,” he said.

He remembers helping Largent pull rolls of carpet, old car tires, hunks of rusty metal, plastic tarps and other debris out of a culvert near the warehouse. Overgrown with weeds, the junk pile had formed a kind of dam.

“That property is the end of the line for storm water runoff coming from as far away as Home Depot, Walmart, Cracker Barrel and every place in between,” Stimack said. “We all benefit from having those places here, the corporations certainly benefit, but they didn’t pay the price to manage the water runoff that’s created after they’re built.”

Hours before the area was drenched in a two-day deluge, on Wednesday county commissioners voted unanimously to back a maximum of $2.83 million in drainage district bonds, for repairs and improvements to the Cass Road Drain.

A drain can be a natural creek, a man-made ditch, a pipeline, a culvert or a combination of methods for re-routing storm water. The Cass Road drain is all of these, plus a round iron grate at the south end of a narrow ditch behind Grand Traverse Trucking & Cold Storage, also on Cass Road.

Those improvements include culvert replacements and berm construction, and combined make up the two least costly improvement divisions, of the three Largent had originally advised.

A third division could have cost several million dollars, and would have added a turn lane to Cass Road and included the installation of micro-drains — a series of small recessed grate openings to channel runoff.

The unanimous vote by county commissioners does not characterize the relationship between Largent and some members of the county board, however.

“I did vote in favor, but only because it will save people money,” Clous, a critic of any extensive reconstruction of the corridor, said. At the commission meeting, Clous told Largent he’d have a hard time sleeping if he were the drain commissioner and taxing property owners the way Largent was.

A day of apportionment for about 500 area property owners was held earlier this month. The bonds guaranteed by the county will be repaid by a special assessment. Garfield Township, the Grand Traverse County Road Commission, the Grand Traverse Band and the Michigan Department of Transportation are also kicking in funds, either through assessments or grants.

Those will be prepayments which will be deducted from the $2.8 million, Grand Rapids attorney Roger Swets, who is assisting Largent with the bond issue, told commissioners.

Andy Thomas, owner of Thomas & Milliken Millworks, a tenant of Great Lakes Malting, said he was assessed $11,000 over 20 years to pay for the reconstruction. That might not seem like much, he said, but he has already paid plenty in other ways.

Thomas & Milliken has a store in Petoskey and a shop in Northport which remain operational and open for business, but the Traverse City showroom was flooded. Thomas is insured and estimated the damage at $40,000. In 2017 he made a claim after a similar flood in the same location and now worries about keeping his insurance.

“We need an immediate response from the township and the county,” Thomas said. “The Cass Road corridor is vital part of the economy, these are climate change events and it’s not going to get better. Where is the plan?”

The Cass Road Drain special assessment district was created following previous flooding, and a downstate firm, Spicer Engineering, started work before a contract between the county and the firm was signed, documents show.

Largent negotiated a separation agreement with Spicer, received their final engineering work along with a bill reduction, and has turned the project over to Gordie-Fraser, a local firm.

Largent is not seeking re-election. A geological engineer, Andy Smits, won the Republican primary in August and is running unopposed.

On Friday morning, Smits, who lives on Old Mission Peninsula, was shoring up his driveway with sandbags and helping a neighbor pump water out of the main floor of his home.

“We keep hearing that we are experiencing a 25-year storm event,” Smits said. “Well, we’ve probably had four or five 25-year storm events this year. These events are going to keep happening and it’s time to look at historical precipitation data and storm water ordinances.”