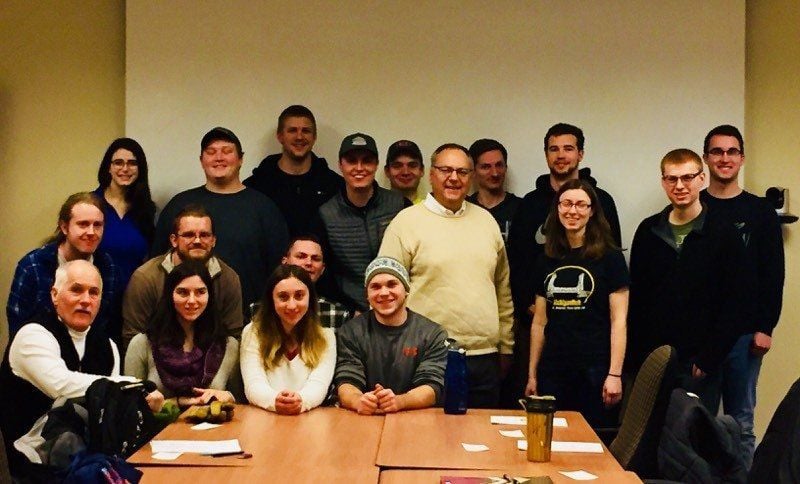 These Michigan Technological University students designed an underground utilities corridor for the Straits of Mackinac for their senior capstone project. Mike Drewyor, their professor, and ILF Consulting Engineers President and senior project sponsor James Morrison are with them. 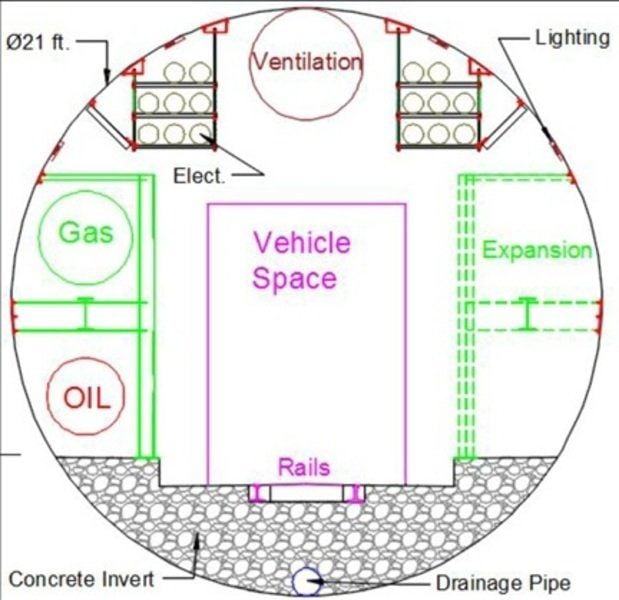 This cross-section shows an underground utilities corridor that a group of Michigan Technological University seniors are proposing to build beneath the Straits of Mackinac. It would be large enough to hold existing utilities beneath the straits and include room for more.

These Michigan Technological University students designed an underground utilities corridor for the Straits of Mackinac for their senior capstone project. Mike Drewyor, their professor, and ILF Consulting Engineers President and senior project sponsor James Morrison are with them.

This cross-section shows an underground utilities corridor that a group of Michigan Technological University seniors are proposing to build beneath the Straits of Mackinac. It would be large enough to hold existing utilities beneath the straits and include room for more.

HOUGHTON — A group of Michigan Technological University seniors are working on a possible solution to protect the gas, oil and electrical lines under the Straits of Mackinac.

University Professor Mike Drewyor said his senior capstone project class of 16 is wrapping up a semester of work examining how to build an underground tunnel beneath the straits. They’ll present their findings in May on what they hope could be a way to protect the Great Lakes from environmental disaster.

Chad Brown, a civil engineering major on the class’s geological investigation team, said he thinks there’s a good potential the tunnel could come to fruition.

“I think that there’s so many concerns, environmental concerns for the public that they would actually like this to happen,” he said. “In terms of it being economical, it could have some complications there, but in terms of preserving the beauty of the Mackinac Straits, I think it’s a very good solution.”

Drewyor said there would also be room to add more utilities in the future if need be. Rails through the center would allow maintenance vehicles to pass through, and it could double as emergency access between Michigan’s two peninsulas if the Mackinac Bridge is closed.

Morrison and Drewyor separately agreed such a tunnel would be more practical than the smaller one just for Enbridge’s Line 5 as envisioned in a state-funded alternatives study.

“I think they’re thinking too small,” Drewyor said. “They’re just going to stick an oil line or two in there and that’s good? It’s like, wait a minute, there’s other things out there, they need to look at this big picture.”

It would also prevent any more incidents like the April 1 boat strike that caused two American Transmission Company cables to leak 600 gallons of insulation oil into the straits, and dented Line 5’s twin pipelines. The U.S. Coast Guard responded to the spill, and Enbridge dispatched a remotely operated vehicle to investigate its own infrastructure.

Students tackled the problem by splitting up into four teams, one looking at above-ground buildings, permitting and land acquisition, another looking at the straits’ geology, the third designing the tunnel’s cross-section and the fourth studying the best access route for the corridor, Drewyor said.

They used information from a variety of sources, from the U.S. Army Corps of Engineers to actual core samples drilled by a company investigating the straits’ geology for Enbridge, Drewyor said. ILF Consulting Engineers and other industry experts chipped in as well.

The seniors said the project was eye-opening in several ways — Wisconsin native and geology team member Taylor Garbe said she had never even heard of Line 5, for one.

Construction management major Matthew Wray said none of the students had ever worked on such a major project before, and their investigation showed how doable such a major infrastructure project could be.

Complicating matters is the mystery of how thick the sediment is at the deepest parts of the straits, Morrison said. This could drive up project costs, but there’s an engineering solution for lots of sediment so it likely wouldn’t kill the project.

For Love of Water Executive Director Liz Kirkwood agreed the students’ project examines an interesting engineering problem. The organization wants the state to shutter Enbridge’s 65-year-old straits crossing. But she believes the state has hemmed Enbridge into looking at a tunnel without answering the question of whether an oil pipeline needs to run below the straits in the first place.

“The Dynamic Risk reports made it pretty clear that the economic benefits are not worth risking the Great Lakes,” she said, referring to a state-ordered alternatives report.

The tunnel also wouldn’t solve the risk posed by the pipeline’s 245 river and stream crossings as it passes through Michigan’s two peninsulas, Kirkwood said — Morrison acknowledged those still need addressing.

Drewyor said the students will present the idea to the state Pipeline Safety Advisory Board on May 15. He acknowledged the idea is just one of many ways to address the controversy around utilities in the straits. But he and his students are hopeful the proposal could garner some serious consideration.

“We would be glad to be part of the discussion on the feasibility of how that would play out,” she said.

The company’s main focus for now is dealing with its damaged cables and restoring power transmission to the Upper Peninsula, Spaltholz said. All six of the company’s lines have been shut off since April 2, and company officials want to restore at least one of two circuits to the U.P. once they assess the condition of the four lines.

The controversy over Line 5 shows no sign of abating — Oil & Water Don’t Mix, a coalition opposing the pipeline, announced an April 23 retirement party-themed event calling for its shut-down set in Boulder, Colo., Chicago and cities across Michigan, including one at the City Opera House in Traverse City at 6 p.m.

Morrison said the students’ proposal is a timely one given the April 1 strike on the electrical cables. It was the realization of a long-held fear, and highlights the importance of acting sooner rather than later.

“We can study it to death and the longer we wait, somebody else is going to drag an anchor across there and make it an emergency,” he said.