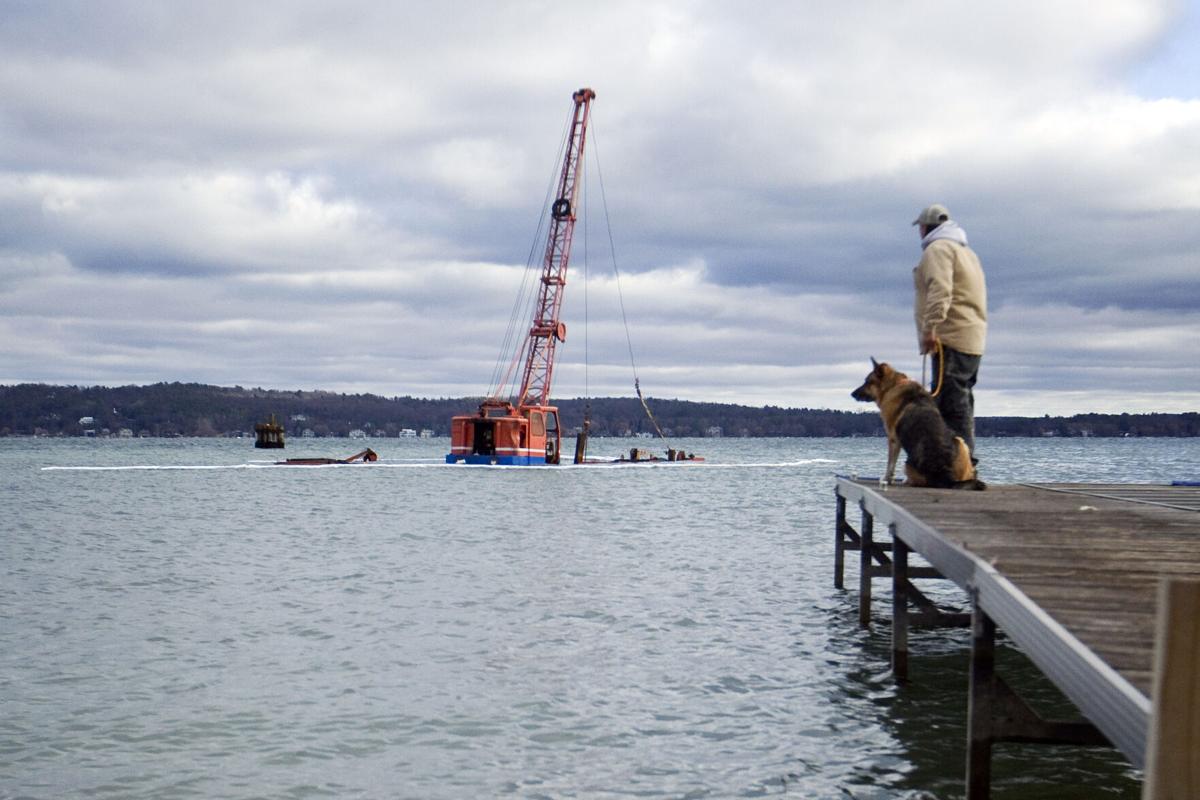 Joe Ruthkowski and his German Shepherd Remmi stop to look at a barge that sits partially submerged in West Grand Traverse Bay on Tuesday afternoon in Traverse City. 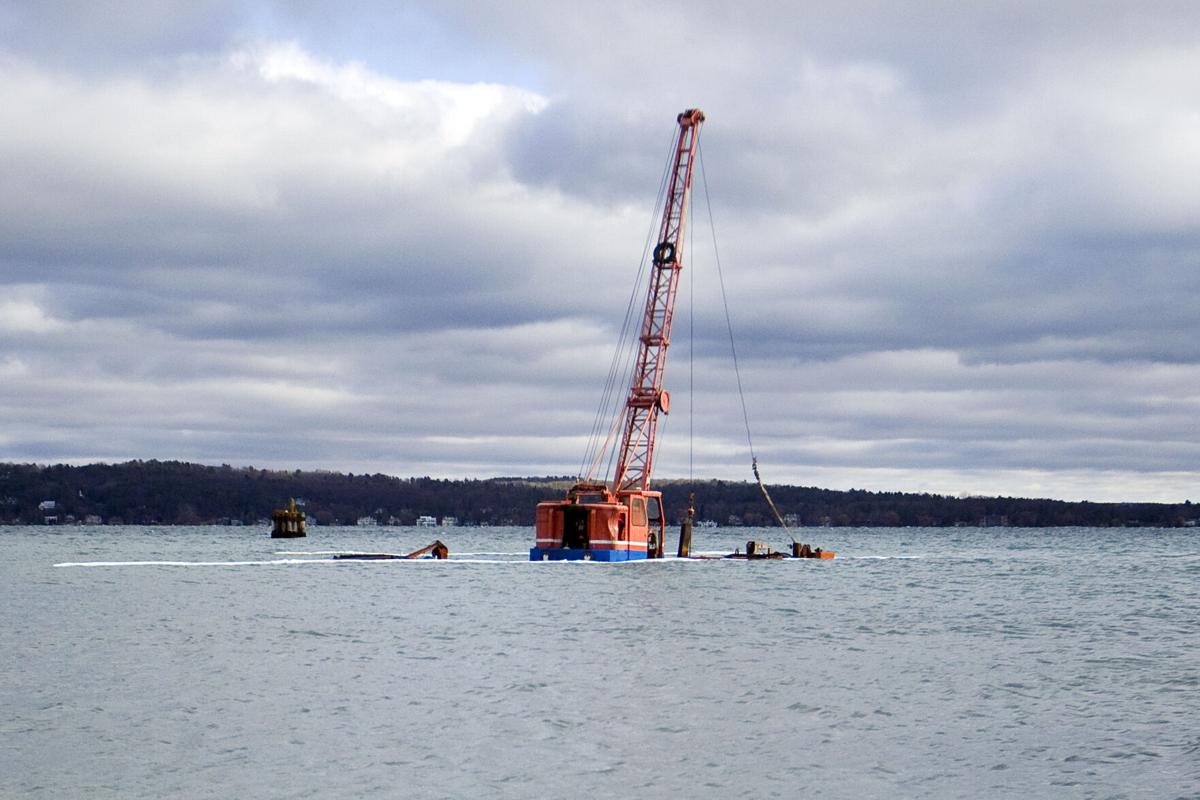 A containment boom sits around the barge that sunk on Monday in West Grand Traverse Bay in Traverse City. 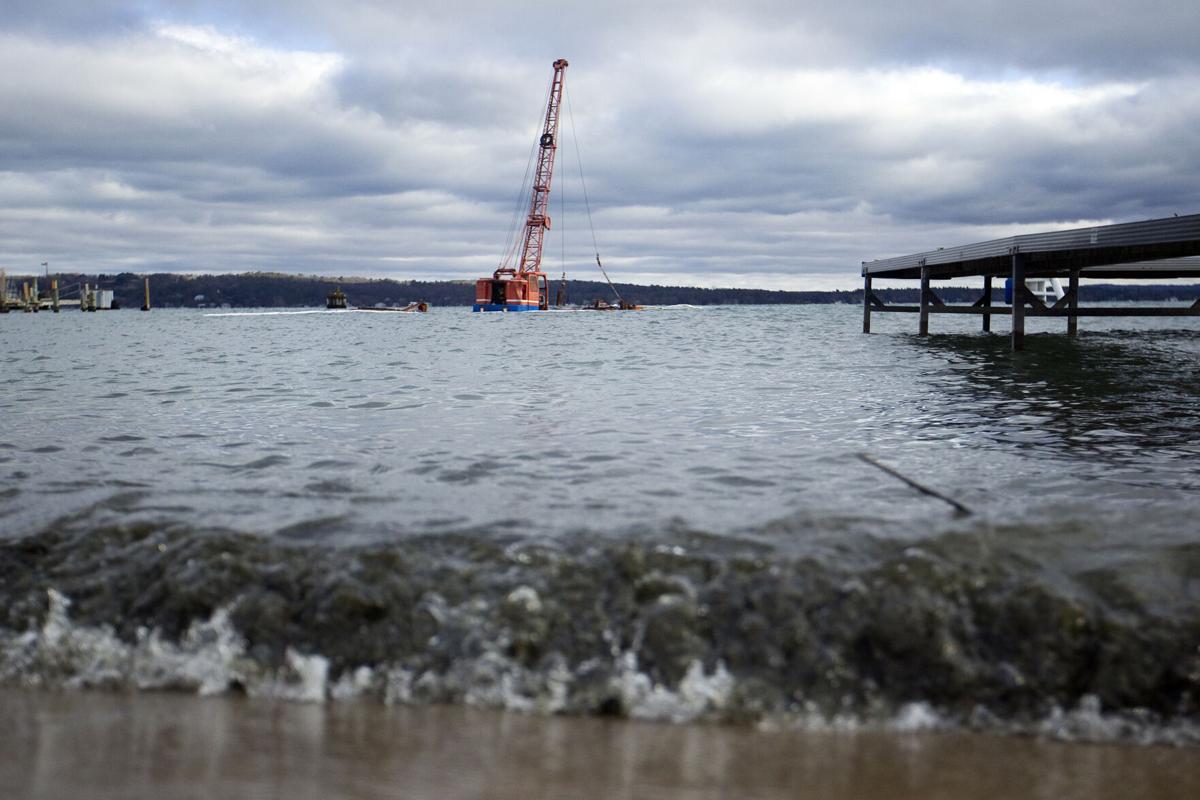 Joe Ruthkowski and his German Shepherd Remmi stop to look at a barge that sits partially submerged in West Grand Traverse Bay on Tuesday afternoon in Traverse City.

A containment boom sits around the barge that sunk on Monday in West Grand Traverse Bay in Traverse City.

GREILICKVILLE — The crane and part of a sunken barge can be seen off the coast of Greilickville, where it is sitting on the bottom of West Grand Traverse Bay.

The barge, owned by Moses Balcom of Balcom Marine Construction Inc., was anch- ored in the bay south of the Elmwood Township Marina when it was overcome by waves and sank.

The barge has about 40 gallons of diesel fuel on board, as well as oil and other fuels, according to information posted by The Watershed Center of Grand Traverse Bay.

A floating boom has been placed around the barge to contain any fuel that may leak out.

The U.S. Coast Guard and the Traverse City Fire Department, which responded to the incident, did not return calls to the Record-Eagle.

Christine Crissman, executive director of the Watershed Center, said the barge can frequently be seen anchored in the bay as Balcom often does work along the shoreline.

While it’s a small barge, any amount of fuel leakage would be a problem, Crissman said.

“Anytime there is the potential for fuel and fluids to get into the water it’s definitely a water quality concern,” Crissman said. “The longer it’s out there in the water, the greater the chance it will have an impact on the bay.”

It is not known when the barge will be pulled out.

This is not the first time Balcom Marine has run into trouble. Over Labor Day weekend of 2019 the company’s tugboat sank in Paradesia Bay north of Northport.

The tug was towed into the Northport Boat Yard and has been stored there ever since, according to a company spokesperson.

Balcom, in fact, recently paid for another year of storage, she said.