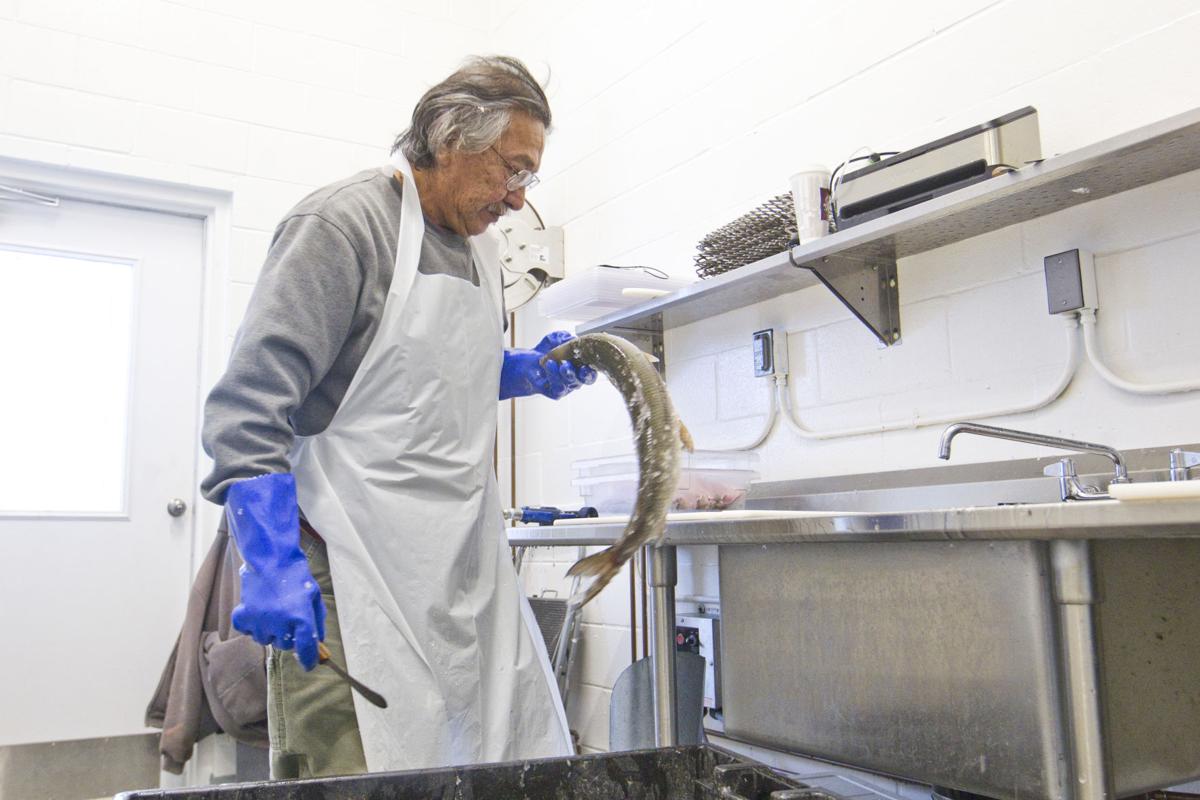 Above, Ed John, owner of Treaty Fish Company, cleans a day’s catch of lake trout, whitefish and cisco at the Arthur Duhamel Marina in Peshawbestown. Below, John’s catch sit on ice while waiting to be cleaned. 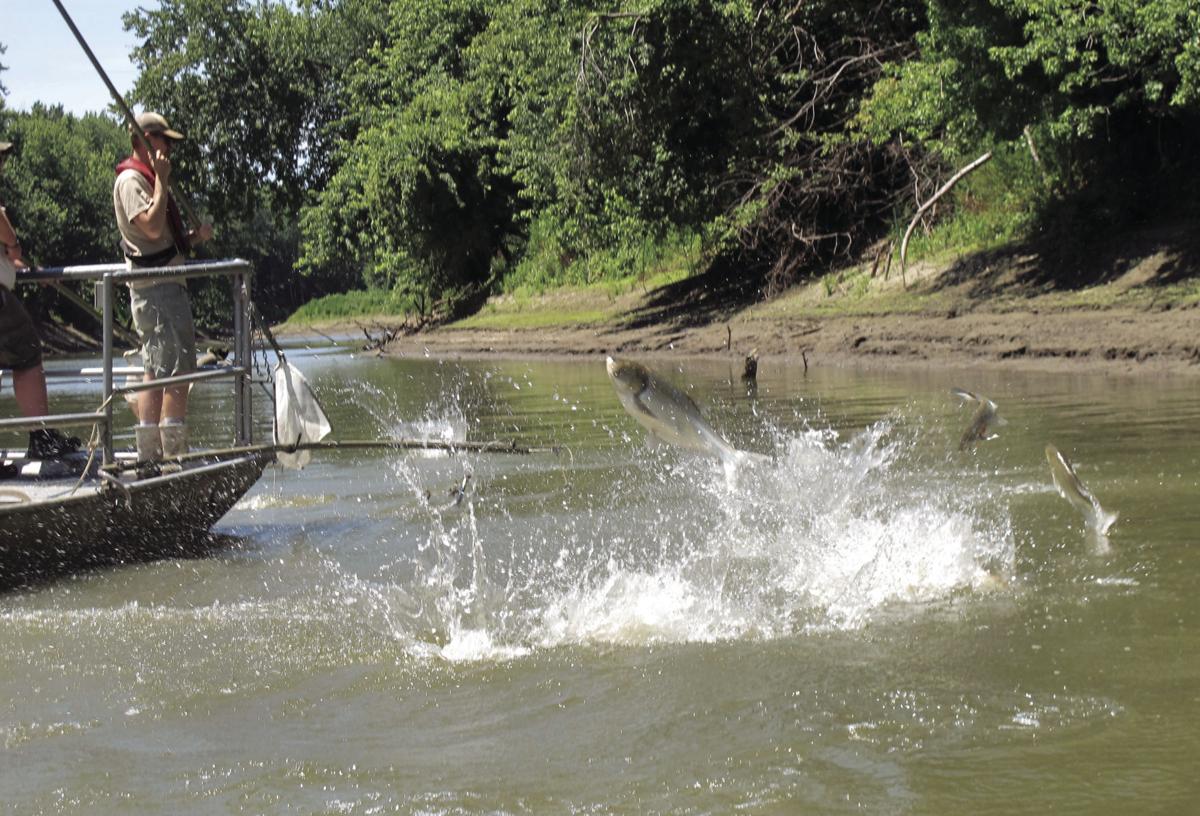 In this June 2012 file photo, Asian carp jump from the Illinois River as scientists aboard a research boat activate an electric current to stun fish so they can be scooped up and examined near Havana, Illinois. 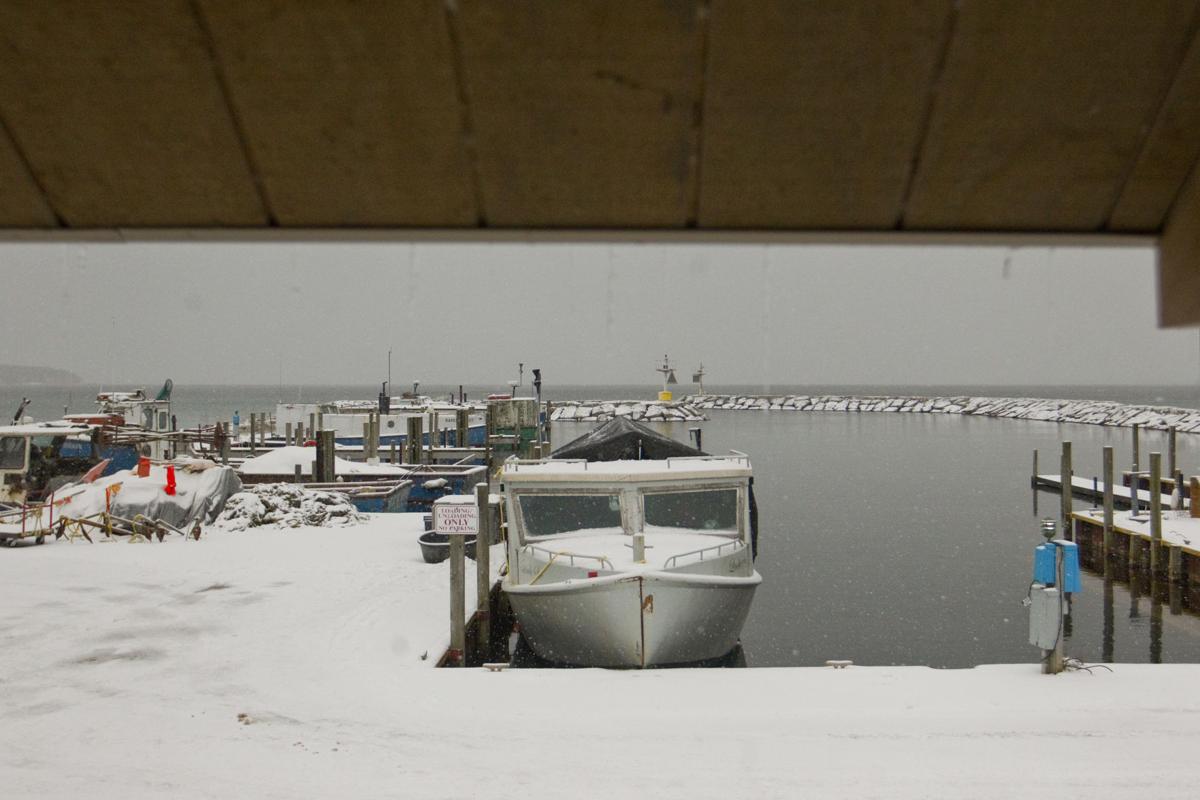 The Linda Sue, owned by Ed John of Treaty Fish Company, sits at the dock at the Arthur Duhamel Marina in Peshawbestown while he cleans his catch. 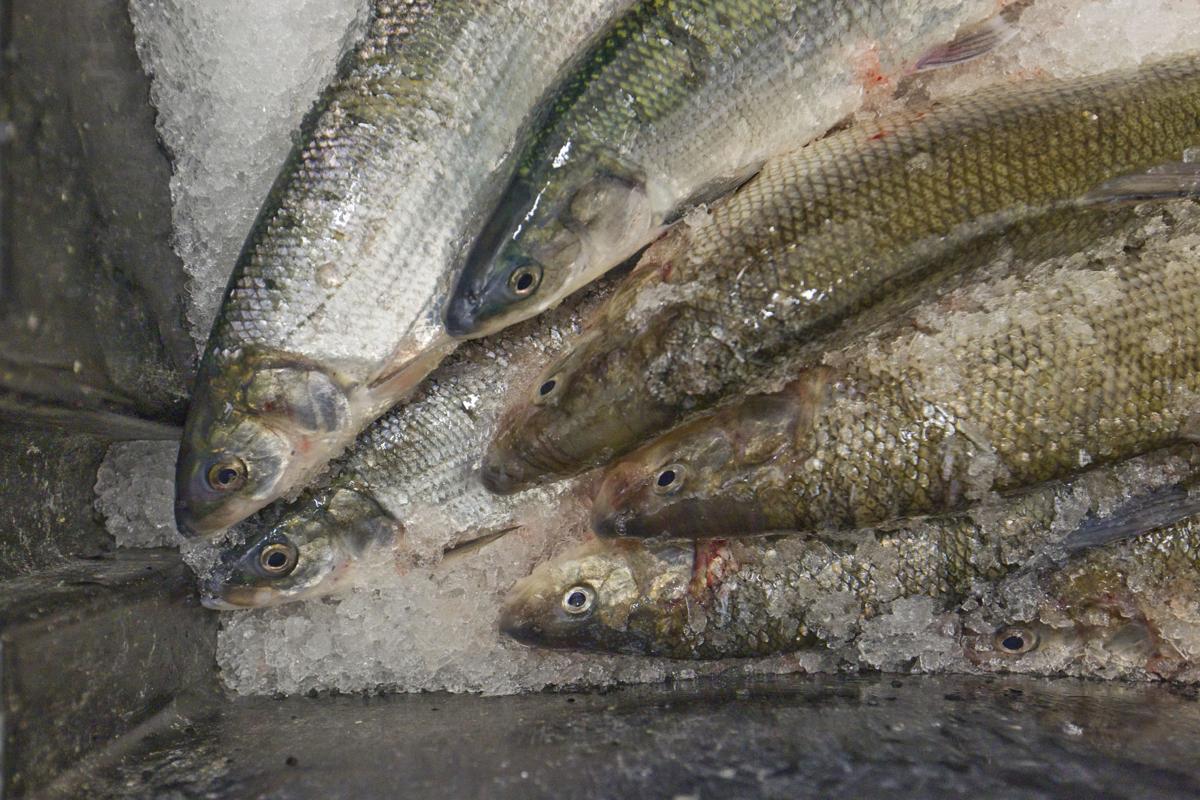 Ed John’s catch sit on ice while waiting to be cleaned. 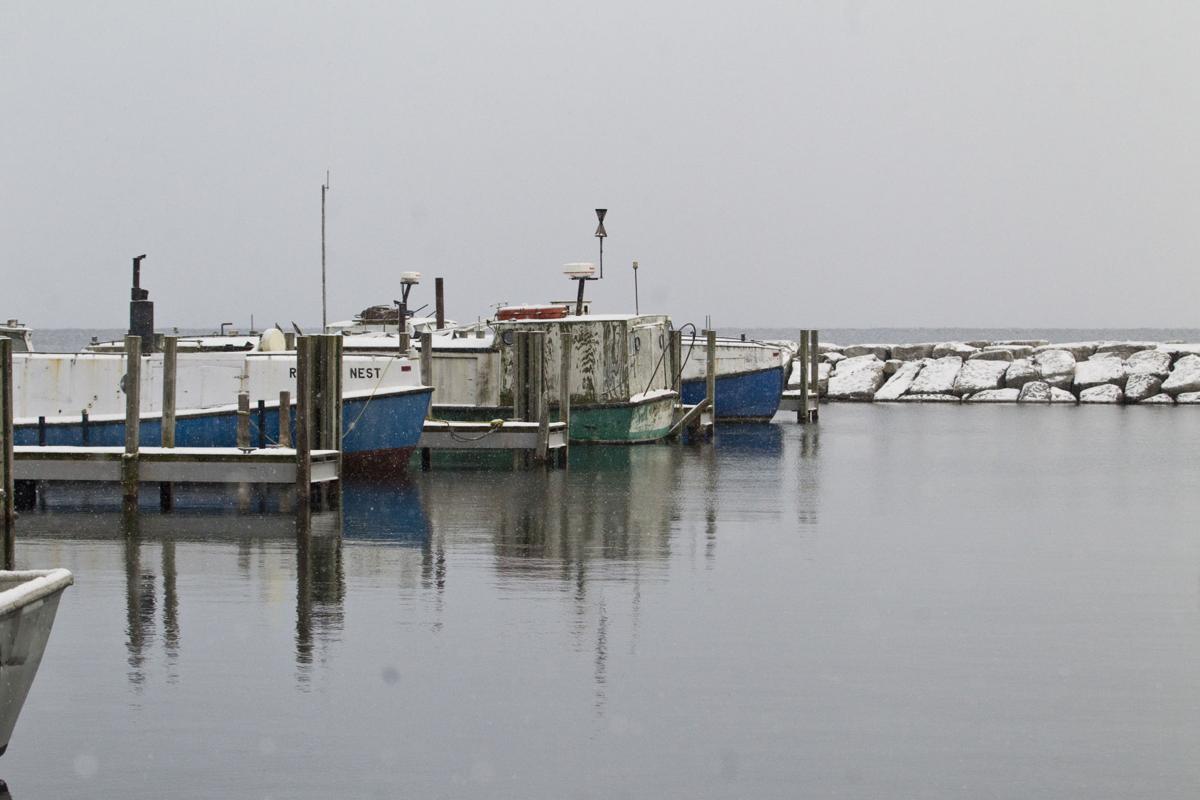 Fishing boats sit at their docks at the Arthur Duhamel Marina in Peshawbestown.

Above, Ed John, owner of Treaty Fish Company, cleans a day’s catch of lake trout, whitefish and cisco at the Arthur Duhamel Marina in Peshawbestown. Below, John’s catch sit on ice while waiting to be cleaned.

In this June 2012 file photo, Asian carp jump from the Illinois River as scientists aboard a research boat activate an electric current to stun fish so they can be scooped up and examined near Havana, Illinois.

The Linda Sue, owned by Ed John of Treaty Fish Company, sits at the dock at the Arthur Duhamel Marina in Peshawbestown while he cleans his catch.

Ed John’s catch sit on ice while waiting to be cleaned.

Fishing boats sit at their docks at the Arthur Duhamel Marina in Peshawbestown.

PESHAWBESTOWN — About an eighth of Ed John’s typical catch is whitefish, with the rest usually lake trout.

There’s an occasional walleye or salmon among what John pulls in and unloads at the marina in Peshawbestown, but it’s the whitefish that garners the best price, he said.

“We’re not catching as many as we used to,” said the owner of Treaty Fish Company.

John is a tribal commercial fisherman who has been fishing Lake Michigan for years. He said he intends to continue that tradition for years to come, even should any of the several species collectively known as Asian carp make their way into the big water.

And that’s an actual threat — environmental DNA evidence of Asian carp has been detected in parts of the Chicago River, miles past an electrical barrier meant to halt the fishes’ progression toward Lake Michigan and the rest of the Great Lakes beyond.

“As a commercial fisherman, I don’t think it will be as bad as people think it will be,” John said. “We’ve already got the mussels and the round goby. We’ve just got to wait for them to get here.”

But not everyone has such a laissez-faire attitude about it.

The invasive species and the risk

Asian carp is a moniker for silver, bighead and black carp. They are invasive species that exploded through the sprawling Mississippi River watershed and took up residency everywhere from aquaculture farms in Arkansas to the Louisiana bayous, and from the Illinois River to Indiana’s marshlands.

These fishes overwhelmed other, native species with extreme proliferation, took over ecosystems and became so abundant that their notorious summertime jumping behavior has become a safety hazard to boaters.

Fisheries experts consider Asian carp to be a major threat to Great Lakes walleye, perch and especially whitefish, which, like the invasive species, is a filter feeder fish. These invasive carp have placed a $7 billion recreational and commercial fishery at stake, experts warn.

No live Asian carp were discovered in the Chicago Area Waterway System during a November survey of more than 150 sites, including hours of electrofishing and setting 10 miles of nets. Nevertheless, concerns persist about the dozens of eDNA hits discovered in October in Bubbly Creek, also known as the South Fork of the Chicago River’s South Branch.

That’s too close for comfort for many scientists and government officials.

“It’s at the doorstep to the invasion,” said Peter Alsip, research assistant for the Cooperative Institute for Great Lakes Research at the University of Michigan’s School for the Environment and Sustainability.

Alsip and others recently published a study about the suitability of Lake Michigan as an environment for Asian carp.

“It may not be prime habitat in Lake Michigan, but it may be better than we first thought,” he said.

Initially, scientists thought a decrease of plankton in the lake as a result of reduced phosphorous runoff and the invasion of zebra and quagga mussels would make it impossible for the invasive filter-feeding Asian carp to find a home there. The question was whether a lake that has become a “plankton desert” can be suitable habitat.

“Our study suggests it could be possible,” Alsip said.

Asian carp prefer to consume phytoplankton and cynobacteria in near-shore areas, but researchers discovered the fish will eat invasive mussels when fed them in laboratories. It’s an opportunistic feeding behavior that could sustain the fishes just enough as they make their way across the lake to better habitats, Alsip said.

Scientists say the best possible habitat for Asian carp in Lake Michigan is likely in Green Bay near its river mouths.

“These fish are capable of swimming long distances and they can fast,” Alsip said. “They might lose weight on the journey.”

Knowing that, natural resources managers in Michigan are dead-set against allowing Asian carp to slip through Chicago and into North America’s freshwater inland seas.

“We are approaching this with a no-regrets policy,” said Tammy Newcomb, senior water policy adviser for the Michigan Department of Natural Resources.

Asian carp in the Great Lakes would directly compete with walleye, chubs, lake herring and whitefish. They eat like alewives, spawn like walleye and grow like salmon, Newcomb said.

Should Asian carp arrive and begin to thrive, she said it could spell disaster for the existing fishery and those who depend upon it — including Michigan’s American Indian tribes.

“We certainly see sufficient habitat out there for these fish to take hold,” Newcomb said.

That sentiment isn’t lost on Mike Ripley, environmental coordinator for the Chippewa Ottawa Resource Authority, which in 2000 banded together five Michigan tribes to negotiate a consent agreement with the state regarding tribal fishing and hunting rights protected by an 1836 treaty.

“In that treaty it specifically said the tribes would keep their right to hunt and fish forever,” Ripley said. “Federal and state governments have a responsibility to protect the resources and they haven’t done a great job of that. We have pollution, we have invasive species — all threaten the tribes’ right to fish.”

He said whitefish has been the primary catch for tribal fishers going back “hundreds, if not thousands of years.” Asian carp now present a terrible threat to that long-standing culture, he said.

“It would devastate the fishery, and in ways we can’t even know right now,” Ripley said.

So what can be done to keep Asian carp out of the Great Lakes?

Both Illinois and Michigan are placing heavy bets on the proposed $800 million barrier at Brandon Road Lock and Dam on the Des Plaines River. It’s upstream from the river’s confluence with the Kankakee River which creates the Illinois River, a major tributary to the Mississippi River.

The site is a few miles downstream from the electrical barriers that now serve as the last deterrent to keep Asian carp from continuing north toward the lake.

Michigan chipped in $8 million last month to engineer and design the planned system that will include another electrical barrier, along with acoustic fish deterrents, bubble curtains and a flushing lock.

The project will require significant federal funding and is expected to take up to eight years to construct.

“It’s a lot of money to build this, but it costs much more to manage a species once it already arrived,” said Andrew Leichty, assistant chief in the project management branch of the U.S. Army Corps of Engineers.

The Corps in May approved and sent to Congress the plan to fortify the Illinois waterway at a crucial choke point for Asian carp.

Environmental advocacy groups support the project, even if some suggest even more could be done.

David Hamilton, senior policy director for the Nature Conservancy’s Great Lakes Project, argues the river water at the lock and dam facility could be chemically treated with chlorine, a way to rapidly kill every living thing in the lock channel and better guarantee Asian carp never slip through. It’s an idea the Corps didn’t swallow.

“Gates would not be released until it’s detoxified,” Hamilton said. “This is a novel application of a proven technology.”

Leichty said the Corps opted for tested methods, saying “we won’t just throw anything in here and try it.”

Marc Smith, conservation partnerships director for the National Wildlife Federation’s Great Lakes regional center, said the Brandon Road project is the only chance to get additional protections in place to stop Asian carp. The facility may slow down shipping, but will significantly reduce the risk of the invasive species making it through and moving further north, he said.

Joel Brammeier, president of Chicago-based nonprofit Alliance for the Great Lakes, said Asian carp are a “catastrophic threat” and authorities should do all they can to prevent them from getting to the Great Lakes, and that includes pressing for Brandon Road facility funding.

Brammeier argued it’s time to switch the mentality from holding the line on Asian carp through commercial fishing in the Illinois River to a position of doing everything possible for prevention. Those invasive fishes cannot be allowed to reach the Great Lakes, he said.

“The red alarm has been flashing for years and years,” Brammeier said.

Newcomb agreed and said Michigan DNR officials are in an all-out war against these invasive fishes.

“There is no Asian carp fatigue in terms of our agency,” she said. “We can’t afford to fail.”