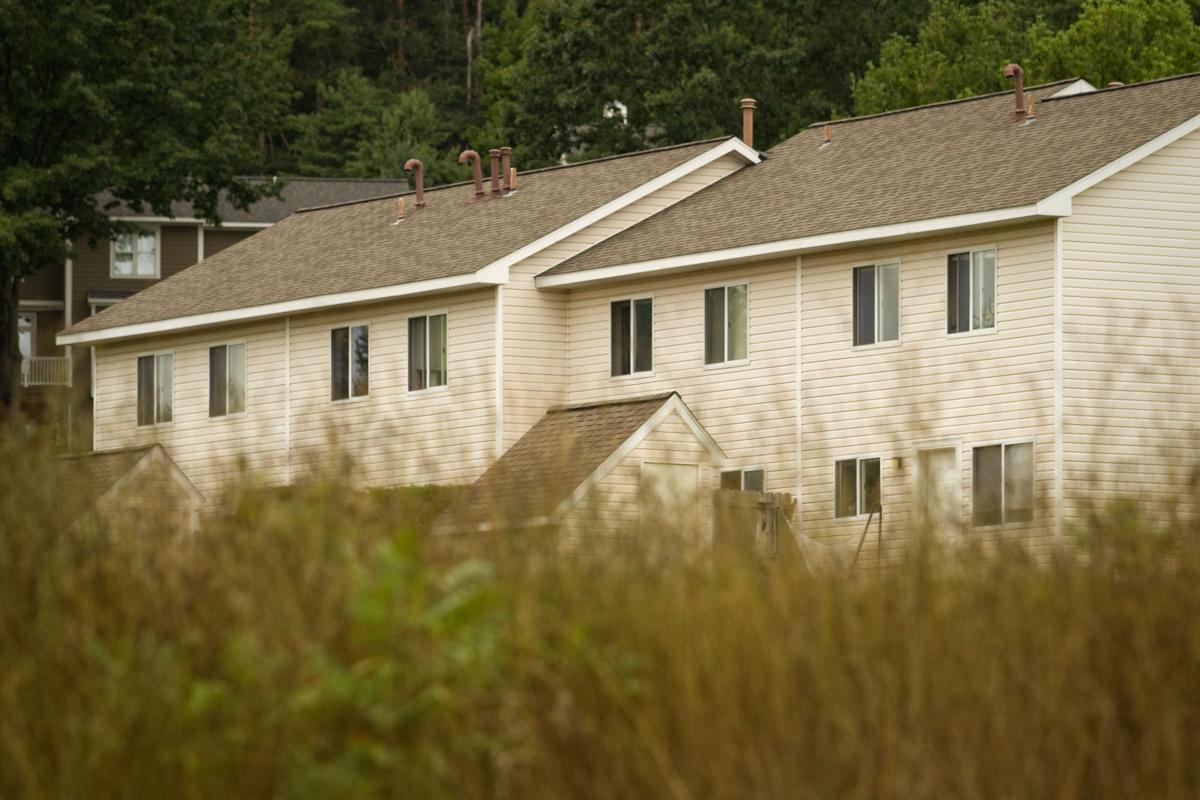 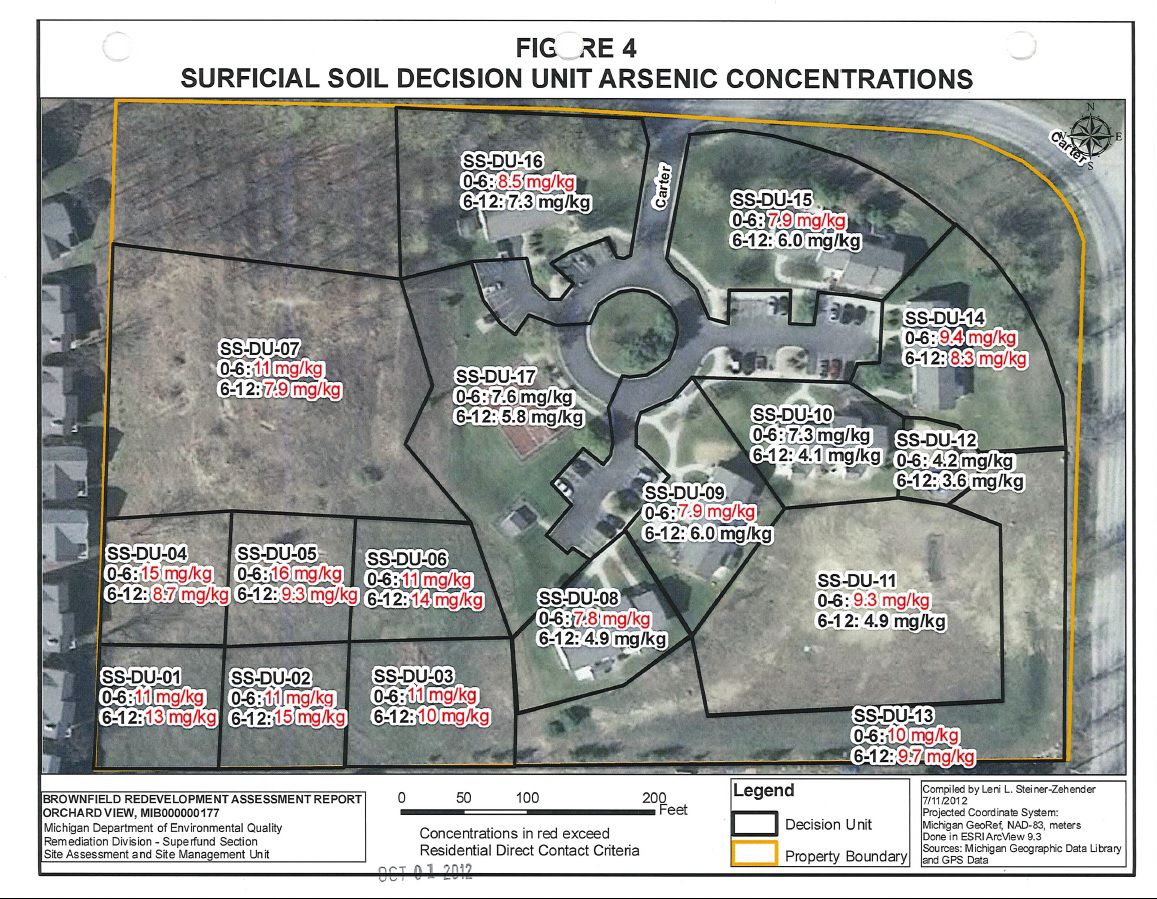 This excerpt from a Michigan Department of Environmental Quality report shows arsenic concentrations found at Orchardview Townhomes during 2012 testing. The state’s residential direct exposure criteria is 7.6 milligrams per kilogram. 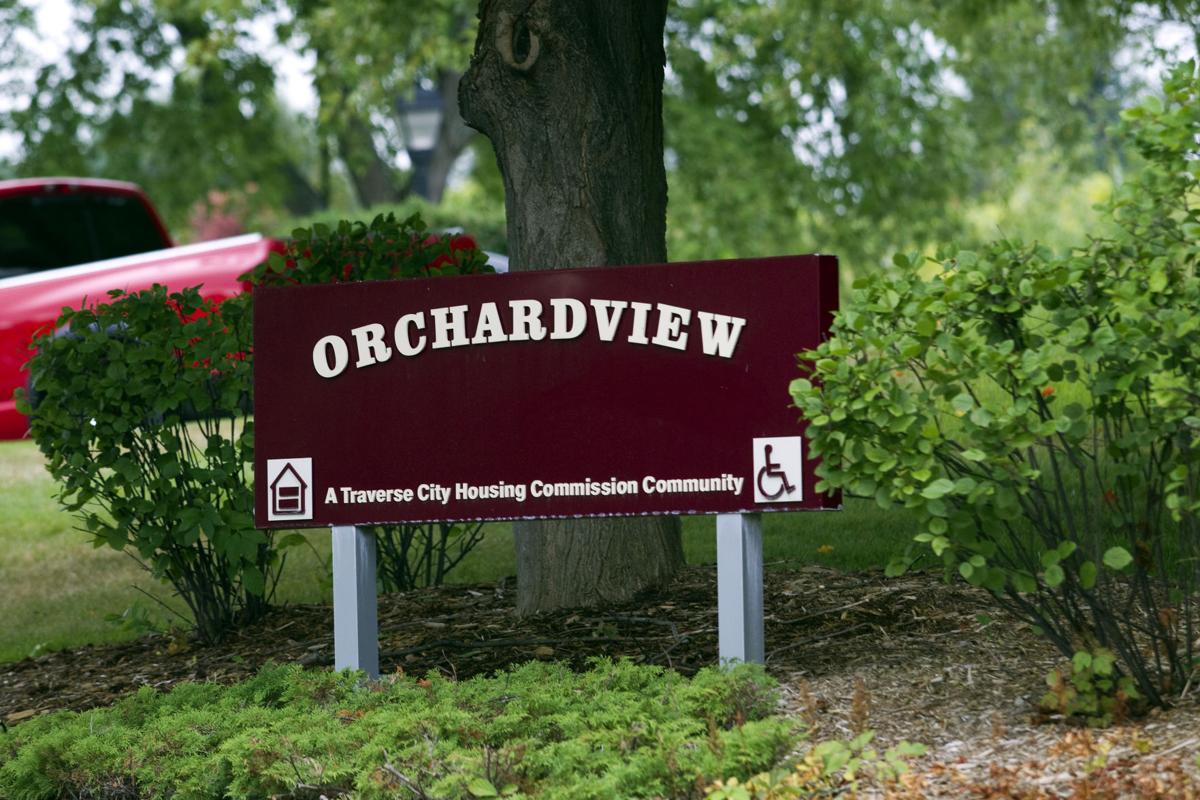 This excerpt from a Michigan Department of Environmental Quality report shows arsenic concentrations found at Orchardview Townhomes during 2012 testing. The state’s residential direct exposure criteria is 7.6 milligrams per kilogram.

TRAVERSE CITY — Traci George takes steps to keep her 3-year-old son from playing in the arsenic-tainted dirt at Orchardview Townhomes.

She worries it’s not enough.

“I put down landscaping fabric, I brought in sand,” she said. “But he’s 3 years old, what do you do?”

Warnings from the Traverse City Housing Commission, which manages the income-based, city-owned rentals, fall flat for George. Kids being kids get covered in dirt when they play outside, so it’s more than just not letting them eat it, she said.

George heard of other children who lived at Orchardview who had arsenic show up in tests at doctor’s visits. Her son is due to visit the doctor soon, and she’ll have him tested.

These reports include a look at how people potentially could be exposed to the arsenic, and what can be done to cut off those exposure pathways, Flickinger said. The housing commission could also seek a site-specific evaluation — a closer look at Orchardview’s risk factors that go deeper than the state’s generic residential exposure criteria.

Those criteria are based on 30 years of exposure, and factors like snow cover in the winter and soil types affect how much of a risk arsenic in the soil actually poses, Flickinger said. So too does turnover at rental housing like Orchardview.

Soil around the housing complex contains arsenic from its past as an orchard. Chemicals containing the toxin once were widely used by farmers and along railroad tracks.

Michigan’s criteria for residential direct contact is 7.6 milligrams per kilogram, documents show — concentrations higher than that pose a risk if dirt gets on the skin or is breathed or ingested.

The criteria could change, Flickinger said. Newly available science prompted the department to draft new rules that would bump the cutoff slightly higher. Those would need to go through the rule-making process before they would take effect.

“But that does not restrict somebody like Traverse City Housing Commission from using that science and requesting a site-specific (evaluation),” he said.

Kristyn Houle, an environmental attorney, wants to see the response activity plan. She represents a tenant association of roughly a dozen Orchardview residents with concerns about arsenic around their homes. She’s also spoken with a now-former resident whose childrens’ urine tests showed high levels of arsenic.

Houle said she’ll have an environmental expert look it over and is prepared to take legal action if they don’t believe the plan adequately protects the dozens of children at Orchardview.

Residents at Orchardview sign a notice of the issue when they move in, TCHC Director Tony Lentych said.

That notice warns residents not to dig in the soil or plant anything in the ground.

Rachel Ward lives at Orchardview and has three children, she said. She grows plants in boxes out back and wishes her youngest, a one-year-old, could play in the mud — “You know, be a kid,” she said.

Ward thinks the arsenic is more of a nuisance, and she doesn’t live in fear for her childrens’ health, she said.

Veronica Watson, another Orchardview resident, is completely unconcerned and voiced anger at what she asserted is a politically driven ploy to squeeze out poor residents from a wealthy corner of Traverse City.

Arsenic can be found on lots of properties in the area, Watson said. Orchardview has a tight-knit community of moms who help each other out. Watson, who has two sons, said it’s something she doesn’t want to lose.

Lentych said no one will be made homeless by the issue — “I will not allow that to happen,” he said.

The housing commission will work through the process EGLE laid out, and will fence off areas with the worst contamination to cut exposure risks, Lentych said.

Residents who want to move can get vouchers for other housing, Lentych said.

The U.S. Department of Housing and Urban Development wants the issue resolved, Lentych said — the agency said as much in a June 20 letter to city Mayor Jim Carruthers.

Traverse City Housing Commission may sell the property if state regulators don’t eventually agree no further action is needed on the property. If sold, the housing commission would give income-based housing vouchers to residents to live elsewhere.

Gordon then wrote on Aug. 22 that the hold was lifted after the housing commission submitted an environmental review at the end of July.

Lentych said the money is for non-maintenance related building expenses — roof repairs, for example. The hold didn’t affect any projects at Orchardview, he said.

Residents can learn more about the soil around them at a Sept. 25 meeting, Lentych said. The Benzie Leelanau Health Department is sending a representative, as is the Michigan Department of Health and Human Services.

Lynn Sutfin, a DHHS spokesperson, said an agency member will talk about the health impacts of arsenic and how residents can cut their risk.

George said she’s frustrated by waiting to hear more about the situation. She hopes the housing commission can test the soil again so residents have new information on how much of the toxin is in the housing complex’s soil.

“The biggest thing is, they’re saying don’t let your kids eat the dirt,” she said. “If their hands are dirty, they could put their hand in their mouth. They’re just kids, they play on the ground, they play in the dirt.”

- Naturally occurring and can combine with other substances to form many different compounds.

- Most common exposure to inorganic arsenic is through drinking water; others can be exposed by eating food like rice and some fruit juice, or with contaminated soil, dust or wood preserved with arsenic compounds.

- Large doses of inorganic arsenic can cause nausea, vomiting, diarrhea up to dehydration and shock. Long-term exposure to high levels is linked to several types of cancers, skin disorders, increased risk for diabetes and high blood pressure.

- Organic arsenic, which occurs in seafood, are considered to be nontoxic or far less toxic than inorganic arsenic.

TRAVERSE CITY — The U.S. Department of Housing and Urban Development could allow the sale of an affordable housing complex in Traverse City ov…