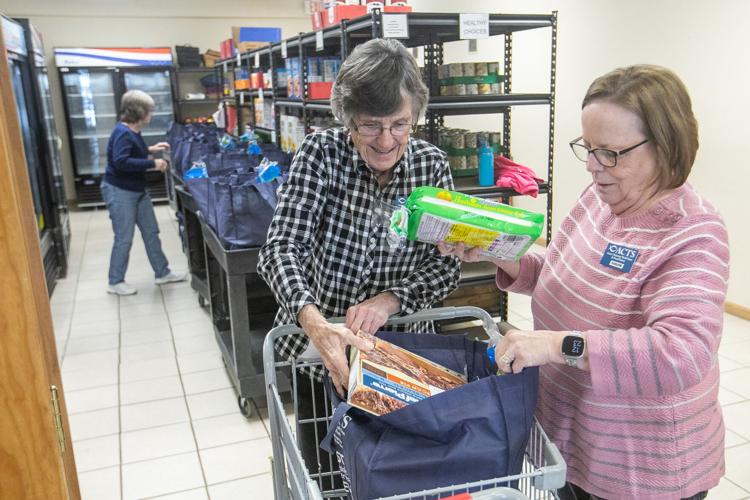 Volunteers Candy Whitmore, left, and Chris Ardingo prepare one of the nearly 80 Thanksgiving dinners to be distributed at Acme Christian Thrift Store and Food Pantry on Monday morning. 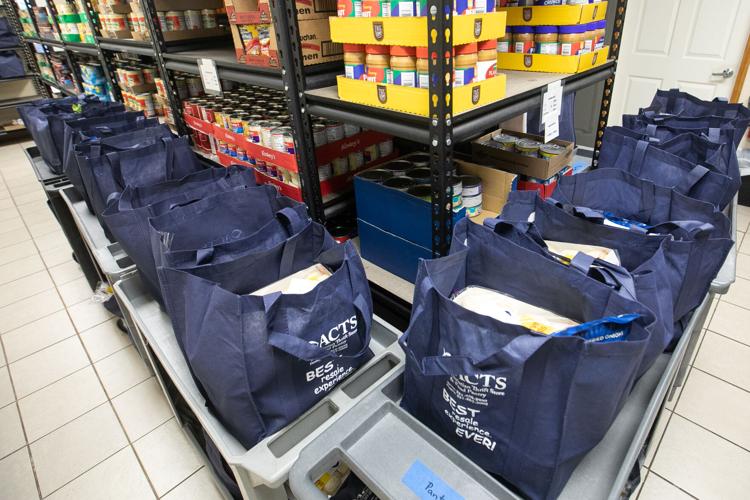 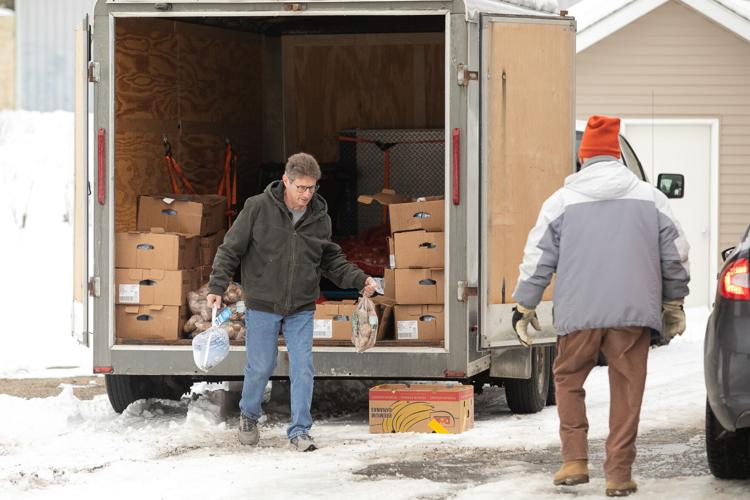 Volunteers Candy Whitmore, left, and Chris Ardingo prepare one of the nearly 80 Thanksgiving dinners to be distributed at Acme Christian Thrift Store and Food Pantry on Monday morning.

TRAVERSE CITY — This Thanksgiving, the Acme Christian Thrift Store Food Pantry provided holiday meals for about 80 families in the area.

That’s an increase from the number of families they fed last year, said Carol Hockin, director of operations for the charity, with even more on the waiting list. The food baskets contain “everything you need for a Thanksgiving dinner,” and were distributed via a drive-through operation Monday.

“I always joke with them and tell them, ‘I’m going to give you all of this stuff, but you’re going to have to cook it,’ ” Hockin said.

The pantry sometimes sees an increase in younger families during the holidays, in particular, as parents struggle to make ends meet while also wanting to buy presents for their children, she said.

Beyond the holidays, however, Hockin said she’s been seeing more appointments at the pantry in recent months. The charity is working on next year’s budget now, and it may be necessary to extend the hours of operation, as well as budget more for food supplies, in 2023, she said.

One sizable group driving that need has been senior citizens on fixed incomes, who aren’t able to stretch their dollars as far as they once could. But she said she’s seeing people experiencing all manner of financial strain, struggling to pay expenses such as utilities, gas and car insurance.

“I see them coming in, sometimes practically in tears saying, ‘I just don’t know what to do,’” she said. “And I’ll say, ‘Well, we can help you with food, will that help?’ ”

This year, there are an estimated 1.15 million people in Michigan facing hunger needs. According to statistics from the advocacy group Feed America, there are nearly 18,000 in the four counties of Leelanau, Benzie, Grand Traverse, and Kalkaska.

With inflation on the rise, the holiday season underway and the pandemic causing economic uncertainty for many, sources at some area food pantries say they’re bracing for an increase in local food needs.

“With the cost of food, I think they’re just all feeling the need to have additional assistance,” Hockin said.

For the past couple of years, COVID-era federal and state assistance programs provided a stopgap between those local charities’ resources and the rising level of food insecurity.

But some local experts say that aid may not be enough to cover the disparity, especially now as many of those programs are scheduled to sunset.

Now is an “important moment” in addressing the issues surrounding food insecurity, said Taylor Moore, director of Food Rescue of Northwest Michigan, during a press conference earlier this month.

Moore has been with Food Rescue for seven years. The organization works with food pantries and other groups to distribute food where it is most needed throughout the region.

During his time in that role, Moore said he has seen “systems change and mindsets change” on providing access to food.

For most of the pandemic, food insecurity decreased from pre-pandemic levels — with rates sometimes being cut in half. Demand at food pantries also fell by as much as 20 percent, Moore said.

With the state’s expansion of the Supplemental Nutrition Assistance Program (SNAP), as well as unemployment benefits, stimulus checks and the child tax credit, Food Rescue was able to distribute more food during that time than ever before, Moore said. Much of that food came through the USDA Farmers to Families Food Box program, a 2020 initiative that has since been discontinued.

But, to sustain those improvements, local groups will likely have to find new resources soon, said Phil Knight, executive director of the Food Bank Council of Michigan, who spoke at the same press conference.

While the USDA supplied Michigan pantries with roughly 50 percent of their food at the height of the pandemic, that has now decreased to about 8 percent. And the state’s emergency allocations to SNAP benefits are expected to cease.

“Probably February will be the last month for those to be distributed, which means your lines are going to get longer,” Knight said. “Our lines are getting longer, and so I think we have to really think about this and work together on it.”

The goal is self-sufficiency, he said, noting that the pandemic exposed the deep-seated causes of chronic hunger in the community.

One state bill, Senate Bill 885, contains a line item that could help bridge the gap by opening up $15 million in grants allowing food banks to purchase food grown or made in Michigan, Knight said. The bill was introduced by state Sen. Roger Victory, R-Georgetown Township, and is co-sponsored by state Sen. Wayne Schmidt, R-Traverse City.

Meanwhile, the Food Bank Council was recently awarded a grant to conduct the state’s first-ever hunger study, which will focus mainly on answering these questions: Who’s hungry, where do they live, and why, Knight said.

When completed, he said the results will allow for better allocation of food resources throughout the state.

“I think it will be devastating to go backwards now,” Moore said. “We must continue to provide nutrient-dense food at the food pantries in the way that we have.”

Report for America corps member and data journalist William T. Perkins’ reporting is made possible by a partnership between the Record-Eagle and Report for America, a journalism service project founded by the nonprofit Ground Truth Project. Generous community support helps fund a local share of the Record-Eagle/RFA partnership. To support RFA reporters in Traverse City, go to www.record-eagle.com/rfa.