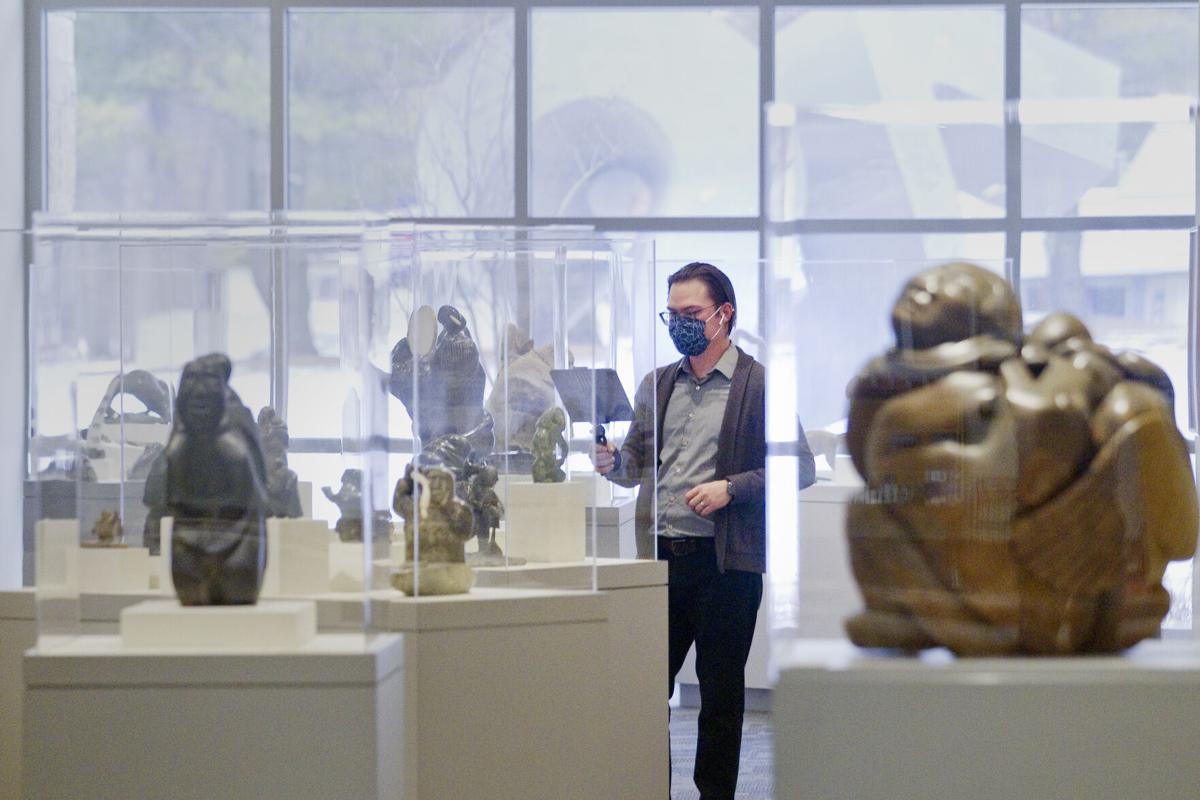 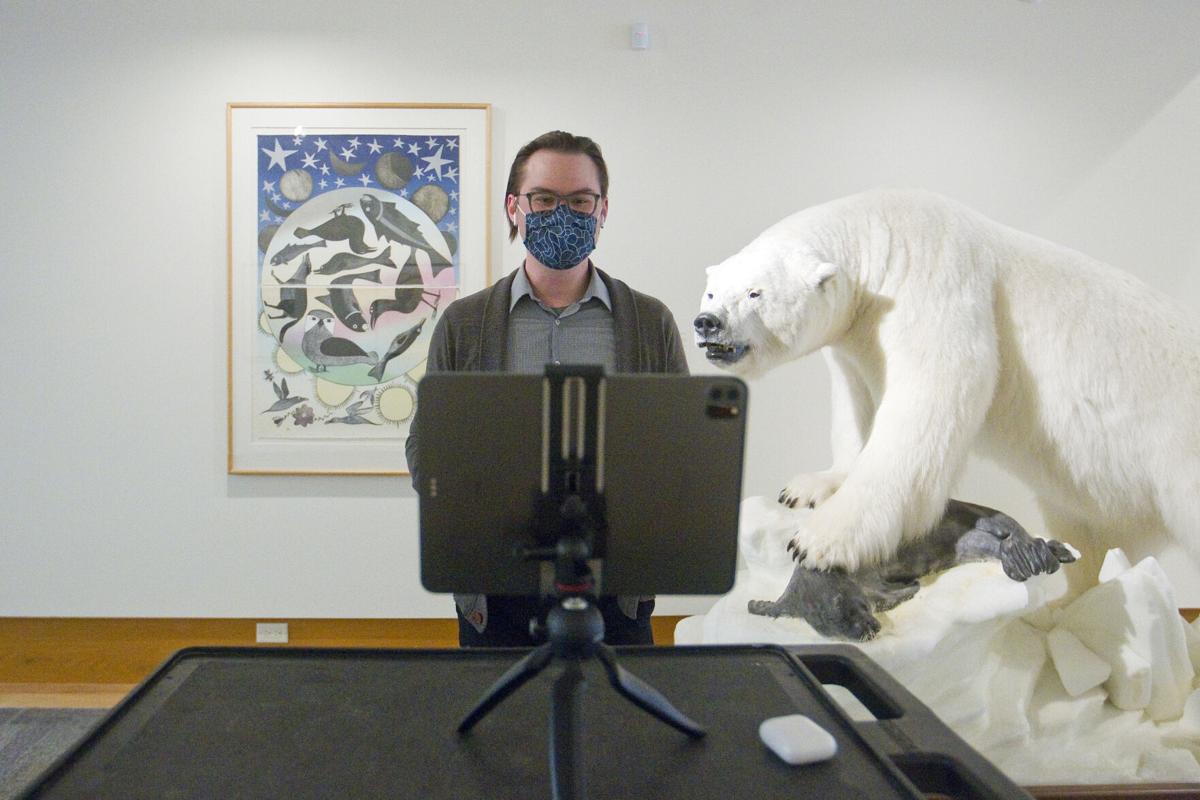 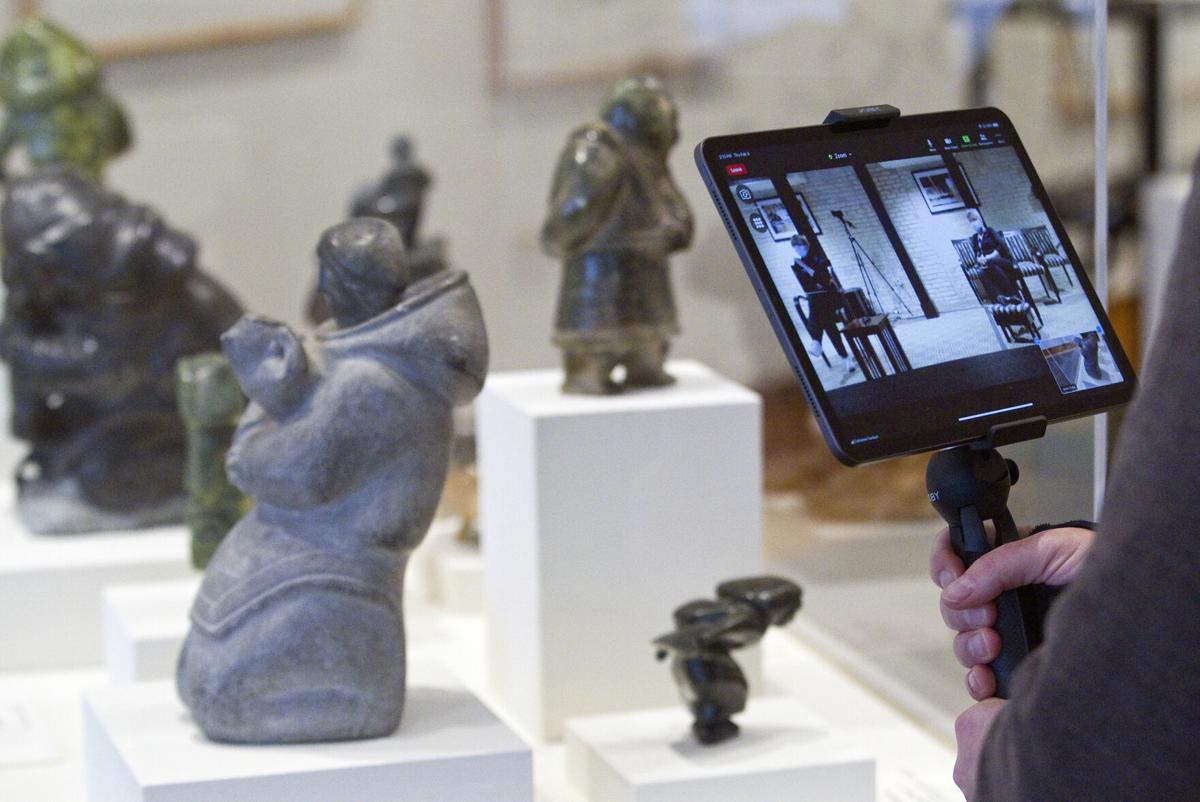 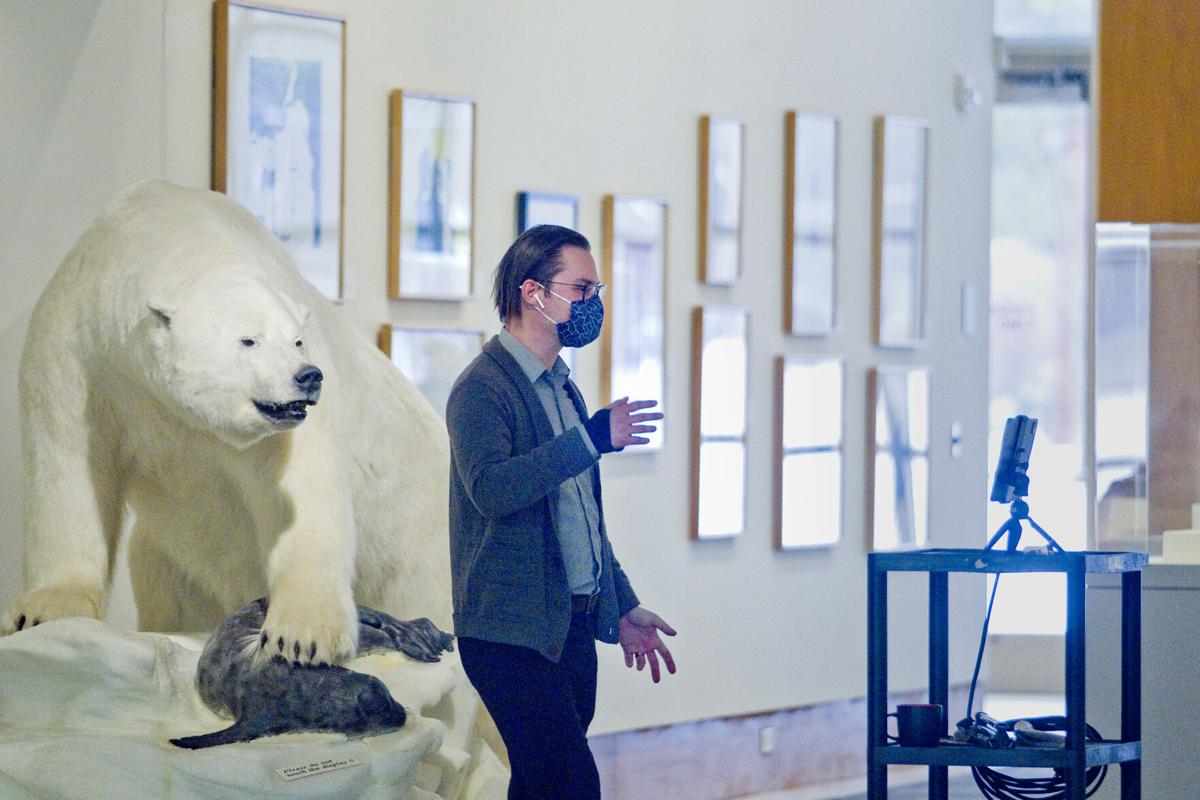 Since March, virtual artist spotlights and virtual guest speakers have busied the museum’s schedule. The majority of events are held via Zoom, according to Audience Engagement Manager Chelsie Niemi. Others are published to YouTube or facilitated via Facebook and other outlets.

Virtual tours — literally walked through the halls by Dennos Curator of Education Jason Dake himself — joined the programming in late 2020.

Those primarily serve local students, and typically include the aforementioned look around, some Q&A segments and prompts to spur discussion, said Dake, who’s latest tour ran in January. They’re open to the general public and any interested adults, too, he added.

Most recently, he showed off the museum’s halls via iPad to a group of local seniors.

The tour varies depending on what attendees are interested in.

Popularity, too, has varied by subject — Niemi said feedback and constructive criticism from attendees has only helped staff better hone the programming.

A big hit during the fall was the Dennos’ “Art-Of” series, she added. Each virtual event featured a different artist and welcomed questions and requests via Zoom.

Niemi’s favorite among them, an event featuring Jean Larson, who appeared for museum guests from her workspace in Iceland. That came in early fall.

“We got to see her studio in Iceland — she went outside and showed us the fjords, then we went back inside and could see all the works she’s working on currently,” Niemi said. “People were really excited — it was something that we wouldn’t normally get to see.”

Like Larson’s presentation, several such highlights on the 2020 calendar were held virtually, Dake said, while others were delayed.

Opportunities get educational, too. Dake has led many a classroom through the museum’s halls, both virtually and in an age that feels long past, in-person. The virtual tours can be extremely interactive, or structured, depending on a group’s interest.

He’s got a slew of annual regulars in the form of local teachers, and many have given the virtual platform a try.

She serves as instructor for the ISD’s Front Street Writers program, and tries to get in some museum time for her students at least once per school year.

This year’s trip couldn’t happen in-person, but with a bit of collaboration between Scollon and Dake, a virtual field trip proved just as successful.

“I had a specific lesson plan in mind, and I’ve worked with Jason Dake in the past — he’s a great guy to collaborate with on lesson plans,” said Scollon, whose students paid their virtual visit in mid-December. “I teach a writing class, right, so I teach them how you can use visual art and other arts to enrich your writing life. The museum’s a fabulous resource.”

The museum shuttered its doors from March to July, Dake said, and not even staffers could access the building.

Creativity was the only option.

“Anything we did had to be completely from home, using access to images on our drives and things like that online,” Dake said. “ So we shifted gears.”

Staffers got together and whipped up art and drawing-based activities for children, some general arts programming and various interesting odds and ends.

Since then, much programming has been done on the virtual platform, though Dake said hybrid exhibitions and a select handful of live events also proved pretty popular. Those became an option in July, when the Dennos’ doors finally reopened.

Hours have varied since, and currently, the museum is open Sunday through Thursday.

COVID-19 spikes shuttered the Dennos through November and December as well, Dake added — but by then, museum staff were prepared.

Going forward, the plan is to offer a primarily hybrid experience.

“There are folks in our community who cannot safely travel and visit places like museums, so we had to start thinking about ways to do some virtual programming that was based in the galleries, live in the galleries, but also available online so that folks could access it as much as possible,” Dake said.

Next on the horizon comes a portrait photography exhibition composed of pieces from New York photographer Dexter Jones. The pieces come on loan from the Krasl Art Center in St. Joseph.

Dake also shared plans to host an event for Valentine’s Day and other changes to come.

He said new virtual creations, odds and ends and inspired activities may come as the pandemic continues and the Dennos’ virtual programming grows more robust. Still, there’s a balance to strike with limited live events as well.

“We always want more people to enjoy these things, we’re always trying to find ways to connect with more people — that’s an ongoing concern,” Dake said. “We’ll just keep trying to figure out new ways to do these kinds of things.”

Learn more about upcoming programming or set up a virtual tour at www.dennosmuseum.org.

This story was updated Feb. 12 to correct a reporter's error.

“Anything we did had to be completely from home, using access to images on our drives and things like that online. So we shifted gears.” Jason Dake, Dennos Museum Center Curator of Education

DATE NIGHT WITH THE DENNOS

Enjoy a special Valentine’s Day program from the comfort of your home, with a mix of art, music, trivia, and prizes! Featuring artworks from the Dennos Museum Center collection, special guests, and a variety of games, this is sure to be a night to remember.

For added ambience, use code DENNOS to receive a free crowler with your order at Rare Bird Brewery. They have prepared a special 3-course meal for two ($50) that you don’t want to miss! Visit rarebirdbrewpub.com to place your order on Feb. 13 or 14 to secure your dinner. Pick up only.