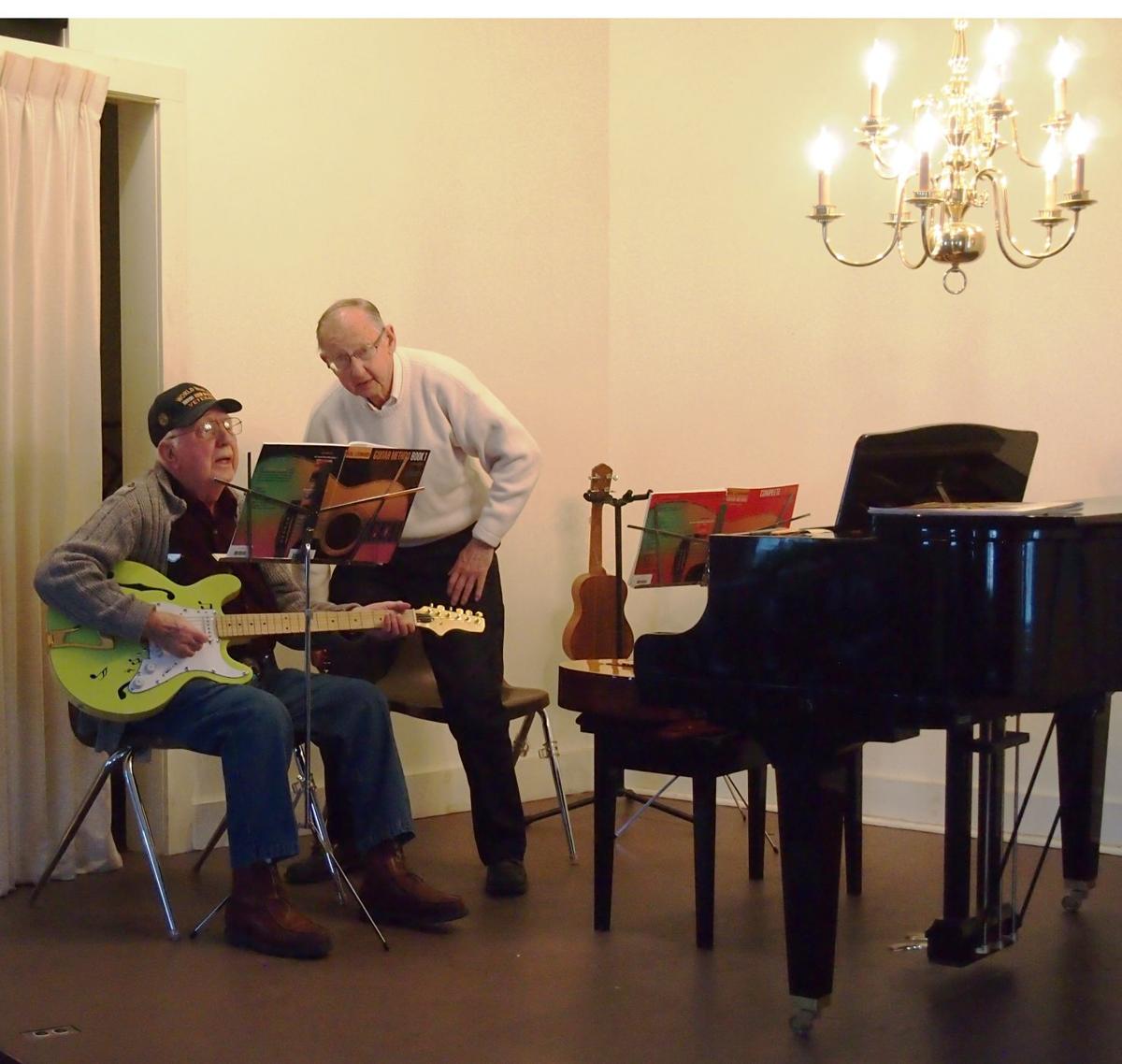 Lorien Adamski, 96, is realizing a lifelong dream of learning to play guitar. His instructor John Hansen is teaching him how to read music and to play “Yankee Doodle Dandy.” 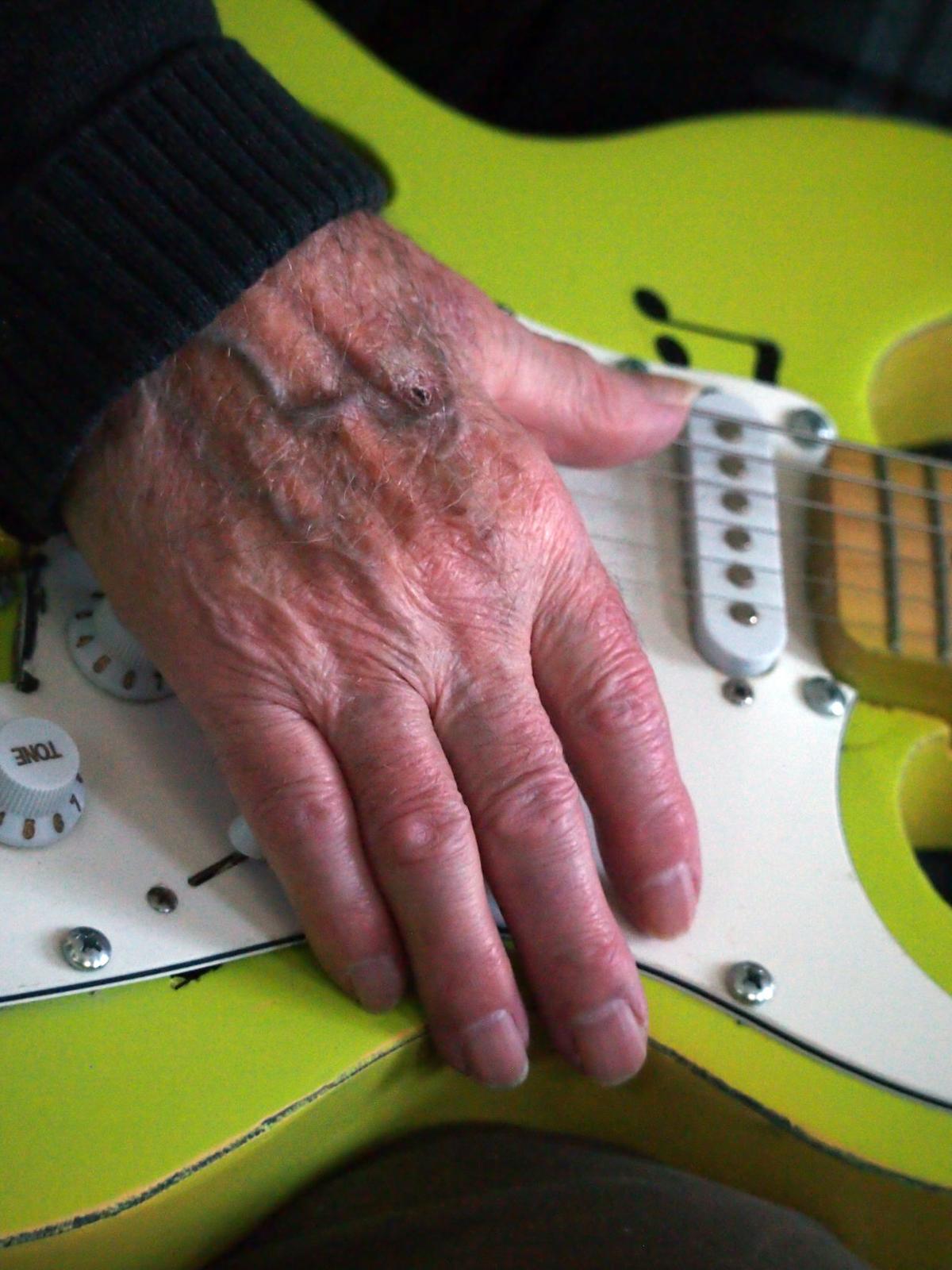 Lorien Adamski practices on a guitar fixed up by his brother-in-law. 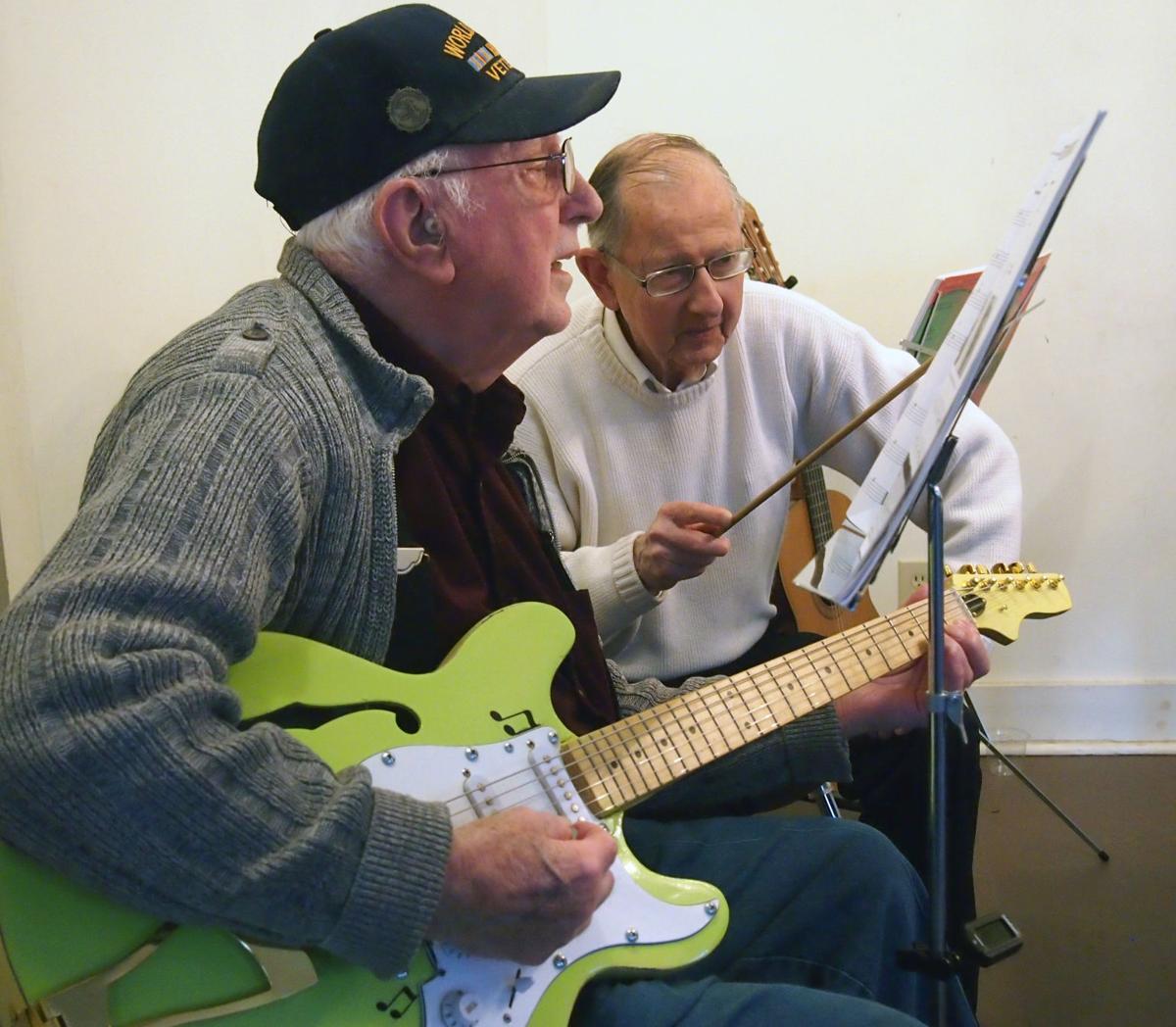 Lorien Adamski, 96, is realizing a lifelong dream of learning to play guitar. His instructor John Hansen is teaching him how to read music and to play “Yankee Doodle Dandy.”

Lorien Adamski practices on a guitar fixed up by his brother-in-law.

MANISTEE — Lorien Adamski had the cracklin’ tempo of an ember-snapping campfire, the neighing and whinnying of his resting horse — all that was missing was the guitar to accompany them.

“I’m a cowboy at heart, always have been,” said the 96-year-old Manistee man who recently took up guitar lessons.

Fondly reminiscing about the cowboys of his youth — Buck Jones and Hoot Gibson, Gabby Hayes and Tom Mix, Randolph Scott and Smiley Burnette, and of course, singing cowboys Roy Rogers and Gene Autry — the notion of riding a horse, strapping on a shootin’ iron and playing a guitar near a campfire at the end of the round-up, sometimes takes hostage of Adamski’s dreams.

Though he would sit saddle high on a stable full of horses, and warm his tired bones near the glow of a campfire, playing the guitar almost passed him by.

“I always wanted to learn to play the guitar,” Adamski said. “My dad brought one home when I was a kid and I took it to school, but the teacher told me, ‘I can’t teach you to play that, it doesn’t have any frets.’”

That setback for the young wanna-be guitarist came in the 1930s, in the shadows of the Great Depression.

Then came World War II. And marriage. And raising a family. And building a house (he built one, by hand, in 1947 with a second story for extra bedrooms, but he never got around to building a stairway; the second story of that quaint, gingerbread-like house has remained inaccessible and unused these past 73 years).

A few years later he made enough money picking apples to add a small addition onto the house, but still, no stairwell.

But Adamski’s dream to play guitar stayed percolating on the back burner.

“I’ve had three lessons (with my instructor, John Hansen),” Adamski said. “I’m learning to play one string at a time — I’m on my third string — and I’m learning to read music, too. I already can play ‘Yankee Doodle Dandy.’”

Hansen mentored his new student on the lilliputian stage of the historic 19th century Music House Wednesday afternoon, he patiently doled out words of encouragement: “There’s that ‘A’ again, that’s a tricky one … one, two, three, four ... you got it, you got it. Good job!”

Growing up on the northside of the Manistee River, Adamski graduated from Manistee High School in 1941.

Over the years Adamski said he “dabbled with the harmonica, but it was the guitar I wanted to learn to play the most.”

“My brother-in-law (Keith Brown) fixed up this old guitar for me — fixed it, painted it, put new strings on it, everything. I like it, I really like it.”

Born April 17, 1923, in Aberdeen, S.D. — Warren G. Harding was president; spanking machines were proposed for first-time criminal offenders in Winnipeg, Canada; and the first issue of Time magazine was published — Adamski grew up an only child in Manistee with a love for horses.

“My grandpa had a horse he called Sparkplug, and boy oh boy, that sure was a good name,” he said. “I went down to the barn one time, put a couple of milk stools next to ole’ Sparkplug and started to crawl up on to him when those stools started to tip over. Anyway, ole’ Sparkplug hauled off and kicked me a good one.

“All my life, if there was a horse around, I was on it. I’ve been kicked, thrown off and stepped on, but I always got back up, and got back on. Oh man, I loved horses — still do.”

Two years ago, for his 95th birthday, Adamski went for a 45-minute horse ride at the Rocking R Stable in Bear Lake, where he used a stairway — a novel idea in that he has yet to build one inside his house — to get up and onto the horse.

A decorated veteran of the Greatest Generation who served as an airplane mechanic with the U.S. Army Air Force in India, the young serviceman helped to repair and service mainly C-47 cargo planes that flew over “The Hump,” a name given to the Himalayan Mountains by American pilots where extreme severe weather conditions and the hazardous mountain ranges would claim more American aviators and their crew than their Japanese enemy.

“Conditions were pretty tough,” Adamski said. “They (Japanese pilots) used to come in and hit the docks where we were, but we usually had good warning and could take cover.

“There was the time me and two others went up the Houghly River and all of a sudden we heard this Indian fella’ come running toward us, waving a sword. We didn’t shoot, we hesitated just long enough to see him turn and run toward this ceremonial sword dance they were having. That was scary.”

After the war Adamski worked at Packaging Corporation of America in Manistee, mostly in the power house.

“I used to sing a lot when I was working there because it was loud and nobody could hear me,” he said, laughing.

With five children, 13 grandchildren, 29 great-grandchildren and 7 great-great-grandchildren, Adamski is looking forward to the day when he’ll serenade his family with his guitar. And if he’ll happen to pick or pluck a sour note, that’ll be OK. After all, he is just learning. That, and he’s getting a bit hard of hearing, too.

“Maybe that’s a good thing,” he said, laughing about his hearing difficulties. “But I’m really having a good time.”

Sitting in his living room with his second wife, Rose, close by (they married in 1994) — his first wife of almost 50 years, Lenore, died in 1991 — Adamski found himself performing in front of the perfect audience — two family dogs named Bella and Blaze, and two cats named Izzy and Oscar.

Then and there in his rocking chair and with his guitar on his lap, sitting center stage to a set of vintage World Book Encyclopedias, oil lamps, ceramic eggs and angels, Western books, family photos, recliner chairs, and more, Adamski was in harmony — perfect and otherwise — with all that surrounds around him.