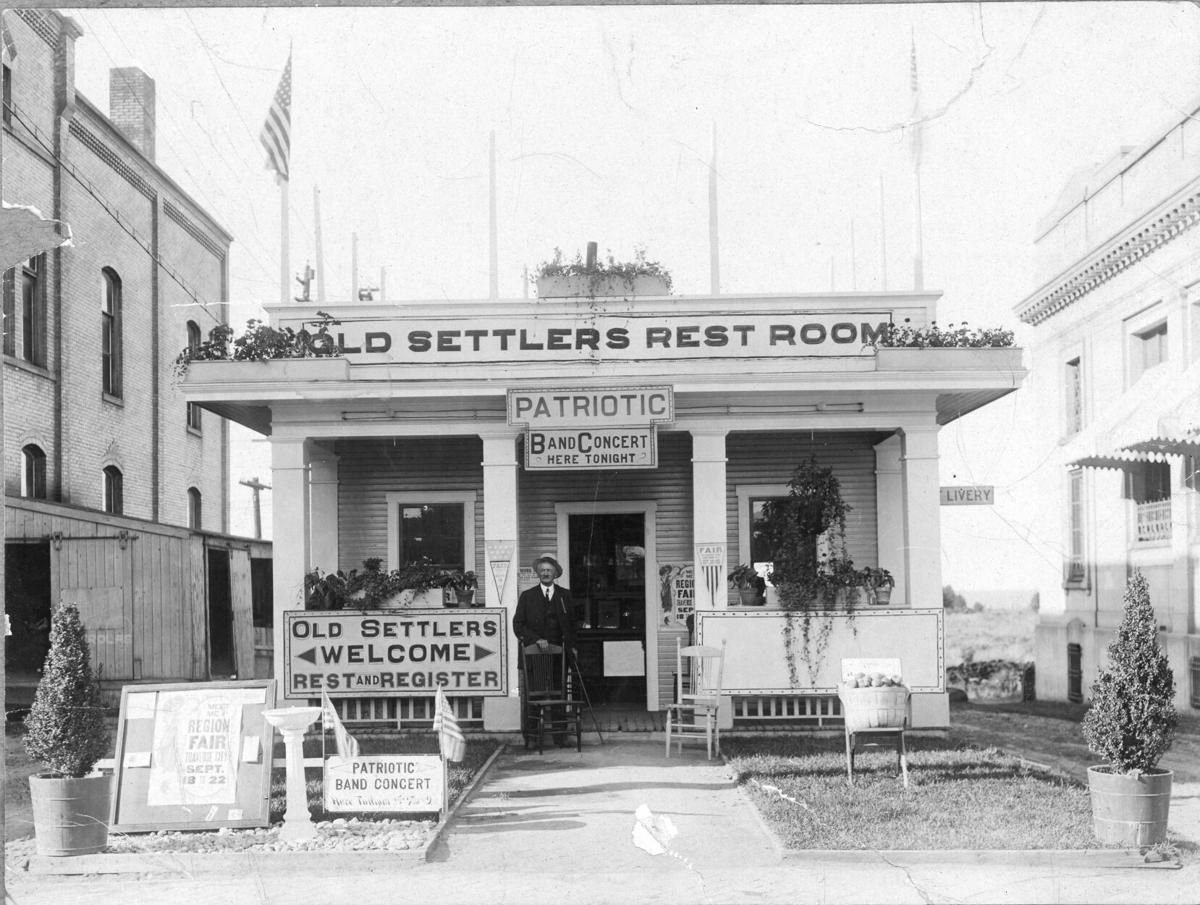 The Old Settlers Rest Room in Cass Street, just north of Front Street. Although called a “Rest Room,” this small club house did not offer restroom facilities. It was later called “The Old Settlers Home.” ca 1900. 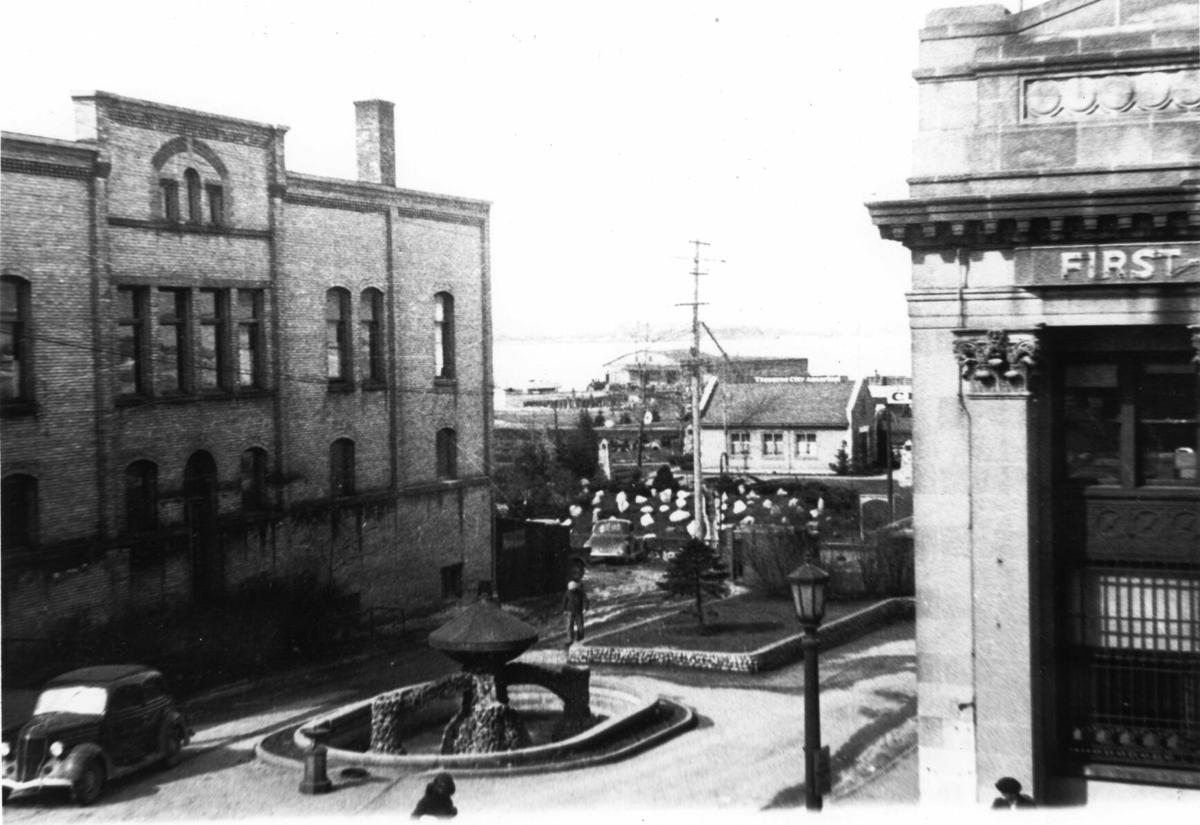 This image shows the fieldstone fountain that stood at the intersection of Cass and Front Streets. The photo was taken looking north towards West Bay, with the Beadle Building on the left, and The First National Bank on the right. Clinch Park can be seen in the middle background. Ca 1940. 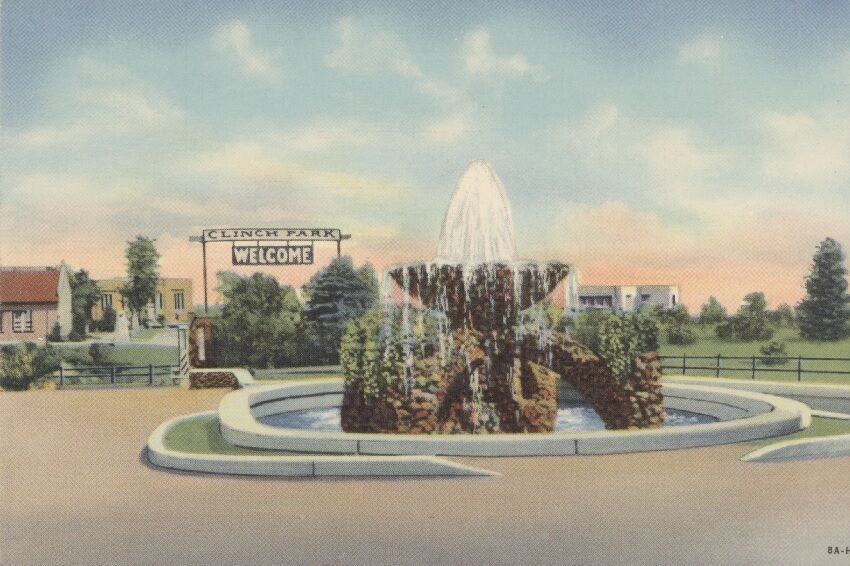 A postcard of the fieldstone fountain that stood at the intersection of Cass and Front Streets, with the entrance to Clinch Park in the background.

The Old Settlers Rest Room in Cass Street, just north of Front Street. Although called a “Rest Room,” this small club house did not offer restroom facilities. It was later called “The Old Settlers Home.” ca 1900.

This image shows the fieldstone fountain that stood at the intersection of Cass and Front Streets. The photo was taken looking north towards West Bay, with the Beadle Building on the left, and The First National Bank on the right. Clinch Park can be seen in the middle background. Ca 1940.

A postcard of the fieldstone fountain that stood at the intersection of Cass and Front Streets, with the entrance to Clinch Park in the background.

TRAVERSE CITY — Glittering lights spiral towards the sky, circling around and around Traverse City’s downtown Christmas Tree. Beloved holiday traditions such as breakfasts with Santa and the Cherry T Ball Drop have been canceled, or gone virtual. But not the tree. The tree stands strong, even against the gales of the pandemic.

One can almost imagine the twinkle of each light heralding: “Christmas is still here, the holidays are still here, joy can still be found.”

Outdoors and socially distanced, citizens gather on the four corners of Front and Cass Streets to admire that ever-green tradition. And every such meeting echoes the spirit of that intersection, for it was a gathering space even before the Christmas tree made its debut.

Around the turn of the 20th century the Front and Cass intersection hosted a small clubhouse, called “The Old Settler’s Home.” By the mid 1920s a fieldstone public fountain had taken its place. Then during some long-ago Christmas season the tree was added to the mix. No one seems to know exactly when that happened, but it seems likely to have occurred beyond the reach of living memory.

Virginia Winckel, 82, said there has been a Christmas tree there for as long as she can remember. Camille Parker, 77, agreed. As a child Parker recalls being very impressed that the downtown Santa knew so much about her. As an adult she learned that the “Traverse City Santa” of her memories had been her godfather, Floyd Courtade. One assumes he was just stepping in to help out the actual big guy.

The “Old Settler’s Home” was a small building snuggled low to the ground at the northern edge of the intersection. To its west rose the towering Beadle Building, today the home of the Mackinaw Brewing Company. To its east was the First National Bank building (today housing Sparks BBQ and The Corner Loft).

The home was a sort of club house, ran by “The Old Settler’s Association.”

Made up of the-then-aging original (white) settlers of the region and their families, this group was a predecessor organization of today’s Traverse Area Historical Society.

In the mid-teens, the Old Settler’s building was moved to Union Street. A fieldstone fountain then was built at Front and Cass, and it remained there until 1956. During much of that time the fountain marked the entrance to Clinch Park.

From the mid 1930s until Grandview Parkway was built in the early 1950s, Clinch Park ran east and west on both sides of the northern end of Cass Street. And it stretched from the northern bank of the Boardman River all the way to the bay. So when the park first opened, the pavement of the parkway, and of the city parking lot that today hosts the Sarah Hardy Farmers’ Market, did not exist.

Clinch Park was the brain child of Con Foster, and was named after R. Floyd Clinch. Foster at one time served Traverse City as mayor and parks commissioner. He also managed the Lyric Theater, which sat at the same location as today’s State Theatre.

Clinch was the son-in-law of A. Tracy Lay, co-owner of the Hannah & Lay Company. He lived in Chicago but made frequent trips to Traverse City on Hannah & Lay business, and was a benefactor to many local projects. He also built the 1930 brick version of the Park Place Hotel.

Clinch Park’s beauty was literally built on a foundation of junk. By the mid-1920s that stretch of beach had become a garbage dump. Not only had once bustling industrial and rail facilities shut down, leaving their detritus behind, but over the years unthinking townspeople added their own discards to the pile.

But in the early 1930s prominent city movers and shakers, like Foster, led residents in a grassroots effort to resurrect the bayfront’s beauty. When the holidays came, looking toward that beauty from Front Street led one to gaze on the city’s always large, and always impressive, Christmas tree.

Picking a tree for such an honor was, and is, a sizeable responsibility. For decades, and perhaps forever, that task has fallen to the superintendent of Traverse City’s Parks and Recreation Department. Derek Melville has held that job since 2016.

“We always try to select a tree slated for removal anyway, and within 10 miles of TC. In the five years I have been superintendent, all the trees have come from a donor that contacts us. They generally have a tree that was either planted too close to a house and needs to come down, or is in the way of a project such as a deck to be built, or a home expansion,” said Melville.

In the past five years the trees have come from the Elks Lodge, Immaculate Conception parish, and three residential locations. Melville recounts that they search for a tree that is 30- to 40 feet tall. In order to safely secure the tree, from 5- to 8 feet of that height is actually sunk below ground into a manhole.

With such height comes great weight. The 2019 tree weighed around 3,000 pounds, with the 2020 tree dwarfing that, weighing in at over 5,000 lbs. Thank goodness that local construction companies, like Team Elmer’s, step in to help with the move.

Thanks to such teamwork Traverse City residents and visitors alike still have holiday traditions to celebrate. And one of those is certainly the downtown holiday tree, with its bright lights spiraling toward the sky.