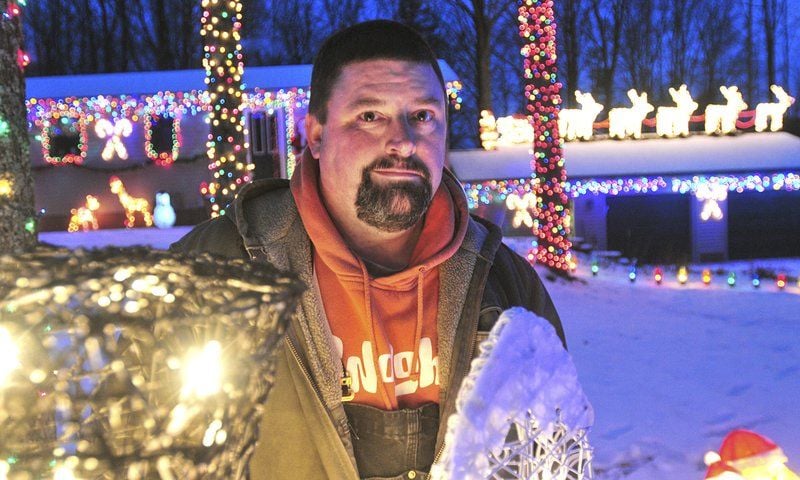 Record-Eagle/Nathan PayneDave Mikowski spent about 50 hours stringing about 10,000 Christmas lights over his front lawn and coordinating them in a computerized choreographing system.

Record-Eagle/Nathan PayneCars line up in front of the Mikowski home at 9061 Kimberly Lane in Long Lake Township to watch a 50-minute lighting display.

Record-Eagle/Nathan PayneDave Mikowski spent about 50 hours stringing about 10,000 Christmas lights over his front lawn and coordinating them in a computerized choreographing system.

Record-Eagle/Nathan PayneCars line up in front of the Mikowski home at 9061 Kimberly Lane in Long Lake Township to watch a 50-minute lighting display.

TRAVERSE CITY — Dave Mikowski’s Christmas lighting adventure began with nothing more than a few lights on one tree — long before he went full-Clark W. Griswold.

Today 10,000 lights and more than 1,000 feet of extension cords come together to help Mikowski spread holiday cheer like a beacon that likely is visible from space.

“When my show starts, I smile every time,” he said, watching a few cars circle the block before parking in front of his Long Lake Township home. “When I stop smiling, then the show’s going to go away. You know, for the most part, I smile and everyone else smiles. That’s what it’s all about.”

The glint in Mikowski’s eye just before his nightly holiday lighting show starts matches that of the Chevy Chase character in the iconic movie, “National Lampoon’s Christmas Vacation.” At precisely 6 p.m. every night the show begins at the Mikowski home, 9061 Kimberly Lane.

Onlookers gathered in a string of idling cars parked on the street in front of Mikowski’s home tuned their radios to 99.5 FM and listened patiently for the show to start.

Jodi Lyons, her husband Rob and their son Mason, 3, arrived a few minutes before showtime and waited in the warmth of their car, sipping hot cocoa. It was Mason’s first big Christmas light experience, Jodi Lyons said.

A 50-minute soundtrack broadcasts from a nearby low-intensity radio transmitter and a special computer control choreographs each strand of lights’ flicker and flash to the music — many tunes straight from the film.

Mikowski’s foray into the world of festive lighting began a handful of years ago when he lived in Alaska and worked as a port crane operator. His lighting display sprawled across a corner lot in the Anchorage suburb and attracted hundreds of onlookers each night.

He eventually invested in the computerized control system that now commands the complicated array of circuits that sprawl across his yard. And Mikowski, despite the polished look of his display, said there still is plenty he can do to expand it both in audience and in size.

“We would get 100 on a big night,” he said. “I’ve still got a lot of work to do. I’ve still got boxes and boxes of new lights. I usually buy them after Christmas.”

His Alaska display gained a loyal following of many repeat onlookers who made a holiday tradition of arriving early to stake out a good parking spot. But Mikowski is beginning to see more traffic to the first display on his new home — he flipped the switch little more than a week ago.

He hauled three shipping crates stuffed with lights and decorations from Alaska to Michigan, including a sleigh and team of reindeer that sit on the peak of his garage.

“I was kind of surprised that there aren’t more of what I’m doing,” Mikowski said.

His brother, Rob Mikowski, has a similar lighting display on his Ninth Street home in Traverse City, powered by a computer control he received as a wedding gift from Dave and his wife, Elizabeth. He hopes more people will adopt the new technology, despite the extra effort it requires to string each section of lights to a different circuit.

“I put in probably a good 50 hours of my time on it,” Dave Mikowski said. “It’s going to get bigger than this, as long as my neighbors put up with it.”

The lights click on at 5 p.m. each night and begin their dance at 6 p.m. They go dark at 10 p.m. Mikowski said he intends to keep his carnival of Christmas twirling until at least the holiday, but might keep it going until the New Year if there’s interest.

“It just seems to make people happy,” he said as the lights dimmed before they waltzed into the second song of the show.

In Northern Living: Lighting the night

TRAVERSE CITY — It would be an understatement to say Dave Mikowski has a few Christmas lights.