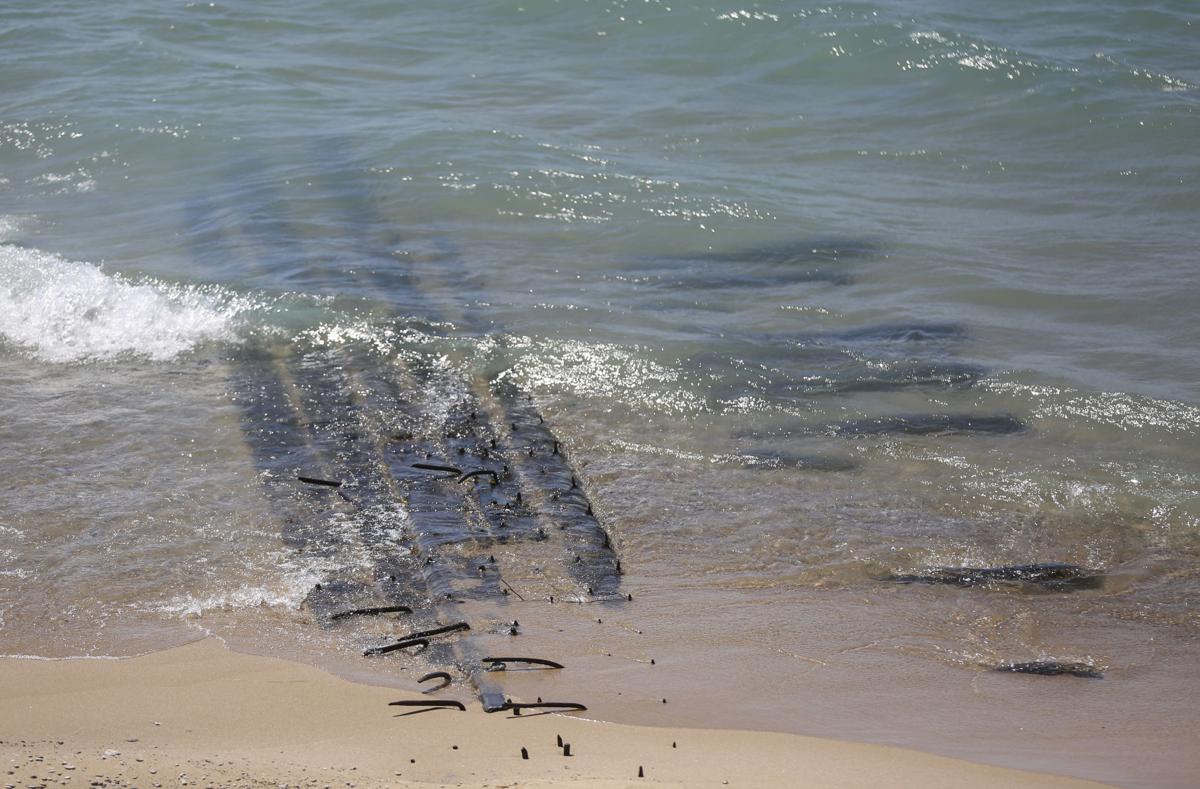 The remains of the Jennie & Annie near Empire. 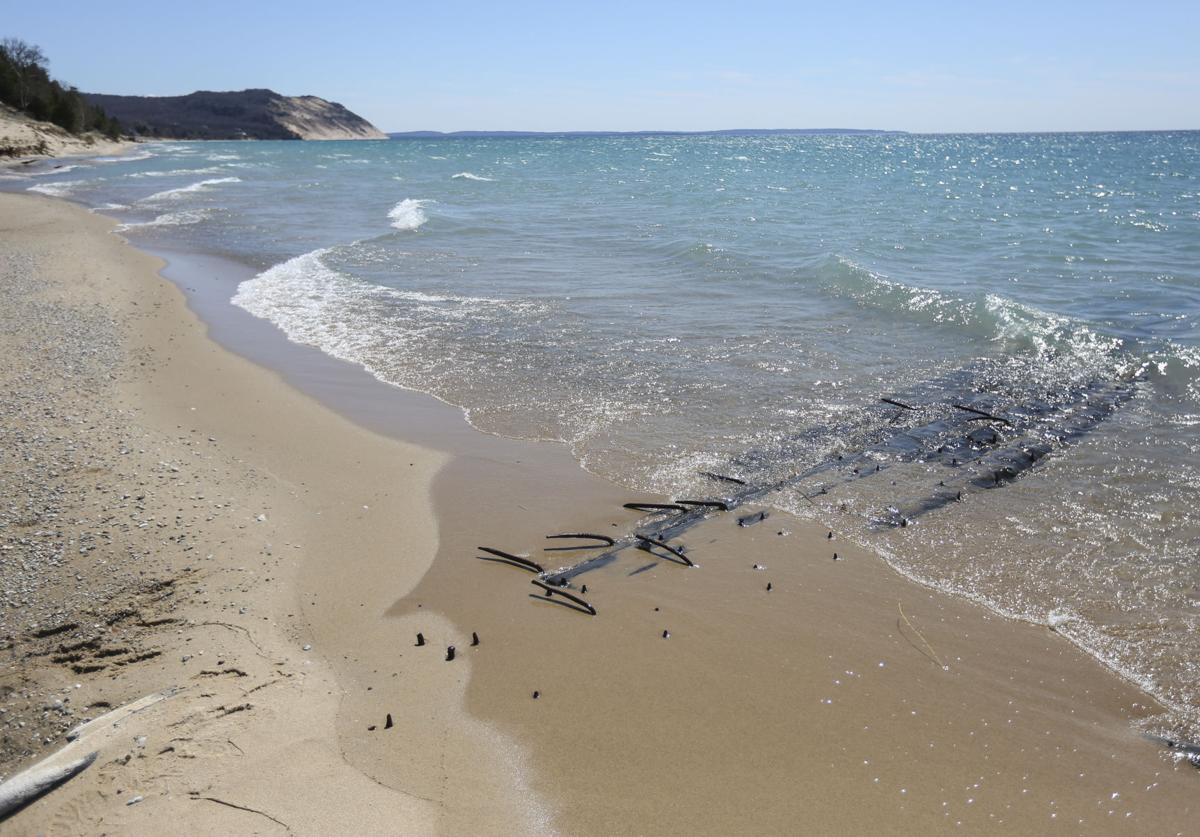 The remains of the Jennie & Annie is visible through the waves on Lake Michigan in Empire on Thursday. 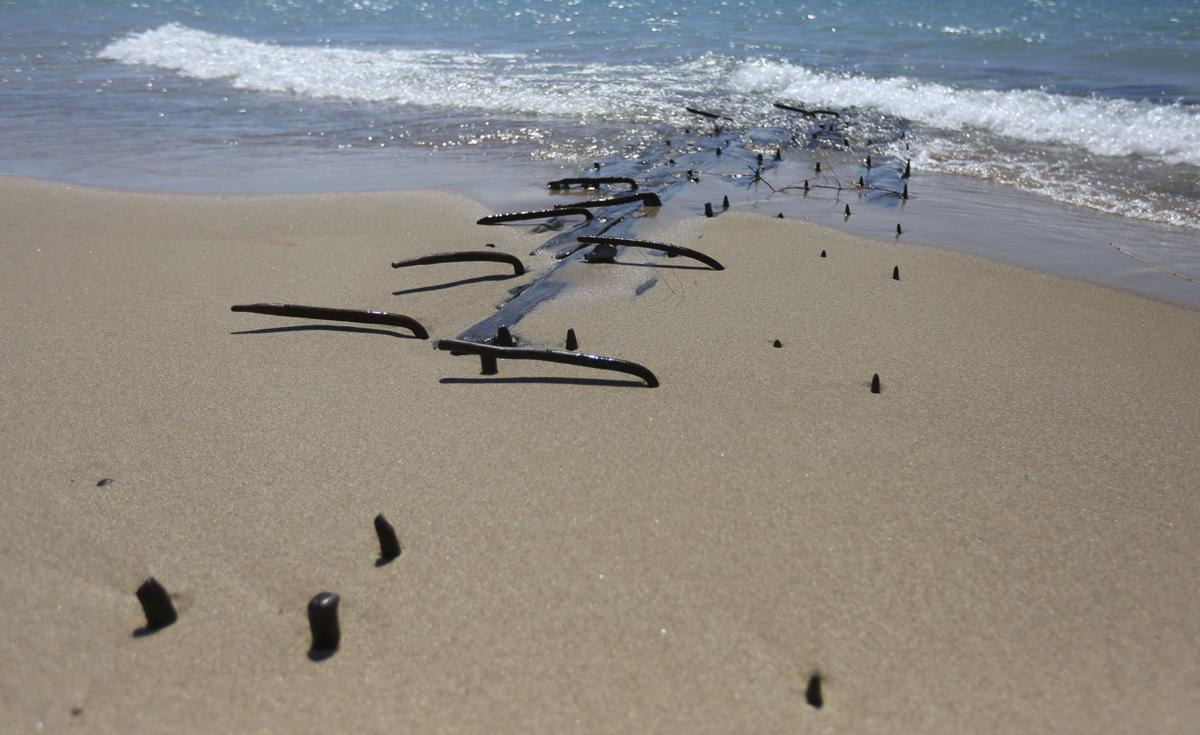 The remains of the Jennie & Annie is visible through the waves on Lake Michigan. 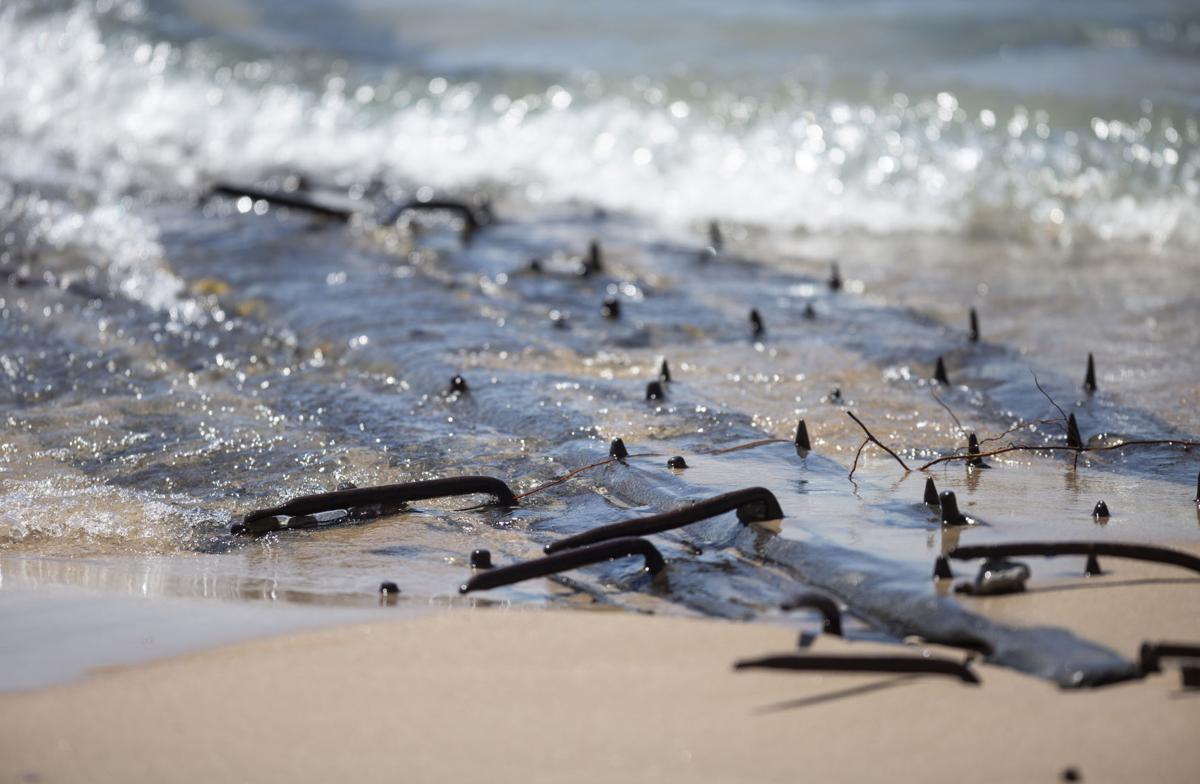 Much of the Jennie & Annie is buried in sand, but some debris is visible.

The remains of the Jennie & Annie near Empire.

The remains of the Jennie & Annie is visible through the waves on Lake Michigan in Empire on Thursday.

The remains of the Jennie & Annie is visible through the waves on Lake Michigan.

Much of the Jennie & Annie is buried in sand, but some debris is visible.

EMPIRE — Every few years or so, pieces of the Jennie & Annie shipwreck make an appearance on the Lake Michigan shoreline near Empire.

Pieces of the schooner have been making their slow but steady way down the coast from her resting place off Sleeping Bear Point for nearly 150 years. Gale force winds and shifting sands recently revealed her progress once again.

Empire resident Paul Skinner was walking the beach with a friend when he spotted her between the outlets of North and South Bar lakes, a little north of Empire Beach. He posted a video and photographs online, which got lots of attention from shipwreck lovers old and new.

“Every three to five years old pieces reappear,” Skinner said. “It’s probably been there, but it’s just been under the sand for a considerable amount of time.”

It is not Skinner’s first encounter with the Jennie & Annie. About 15 years ago he and his wife were walking on the 90-foot-high ridge of a drumlin. They were curious about a house being built there, but the house was soon overshadowed by what they saw in Lake Michigan — three large pieces of the ship with pieces of debris littered between them.

The shipwreck was fully submerged about 15 feet out and located very near to where it is now, he said.

“It was a clear, clear day,” Skinner said. “The water was just crystal clear and dead flat calm.”

The Jennie & Annie was driven ashore in November 1872 after nine years of plying the Great Lakes, according to information from the National Park Service.

The crew of 10 lashed themselves to the masts, where they stayed until the vessel broke apart. Three of them made it to shore, but the rest drowned in the ice-cold surf.

The schooner is one of 16 known shipwrecks in the Manitou Passage that runs between Sleeping Bear Point and the Manitou islands.

Gravel shoals and unpredictable storms made the passage treacherous, and there are believed to be another 45 undiscovered shipwrecks there.

A 105-foot-long, 22-foot-wide piece of what was believed to be bilges from the Jennie & Annie first surfaced in 1980 between the two Bar lakes, NPS information shows. The wreck was covered with sand before it could be fully documented.

Mark Lindsay re-discovered it in 2012, when water levels were at record lows.

“Now it’s not surprising that it’s come again because there’s so much water in the lake,” said Lindsay, of Kingsley.

A photographer, Lindsay was walking the beach on a frigid February day when he came upon the wreck.

“When you live in this area you don’t have to go far to find something beautiful, something incredible,” he said.

Lindsay posted his photos online and people soon came out in droves to look at it, he said.

“There was like a mini whirlwind for a week and a half,” he said. “It was really a neat thing to stumble across.”

Part of another piece that was found directly off Empire Beach several years ago is now a bench that sits in front of the schoolhouse at the Empire Museum Complex. The piece had iron spikes driven through the hull and was removed because of the danger to swimmers, said Dave Taghon, president of the Empire Area Heritage Group.

Taghon said the National Park, the state and other entities did not want the artifact, so a local contractor cut it into two 40-foot sections and put it in his barn to dry out. Taghon later took about 8 feet for the bench.

Steve Harold, author of “Shipwrecks of the Sleeping Bear,” often gets a call every time a shipwreck appears in the area. His book documents 35 vessels, all but one of which blew ashore between the mouth of the Platte River and Leelanau Point.

“The shores of the Great Lakes have endless vessels entombed on them,” Harold said. “Often you don’t see them for 50 years and then they come out.”

But the maritime history buff and former director of the Manistee County Historical Museum — a post he held for 35 years — said it’s very challenging to identify pieces that wash up without knowing the complete length and width of the ship’s hull.

“When you’re working on a skeleton you don’t always have that,” Harold said.

Skinner revisited the Jennie & Annie on Wednesday and said she was already half covered by sand.

Lindsay said he has not been out to see it this time around and probably won’t go.