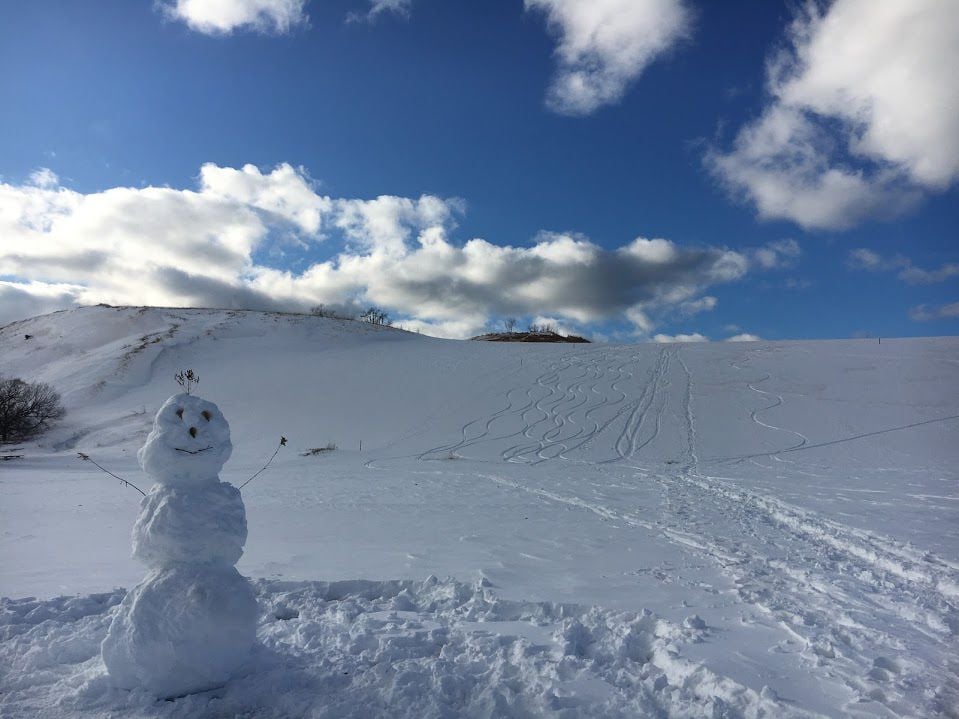 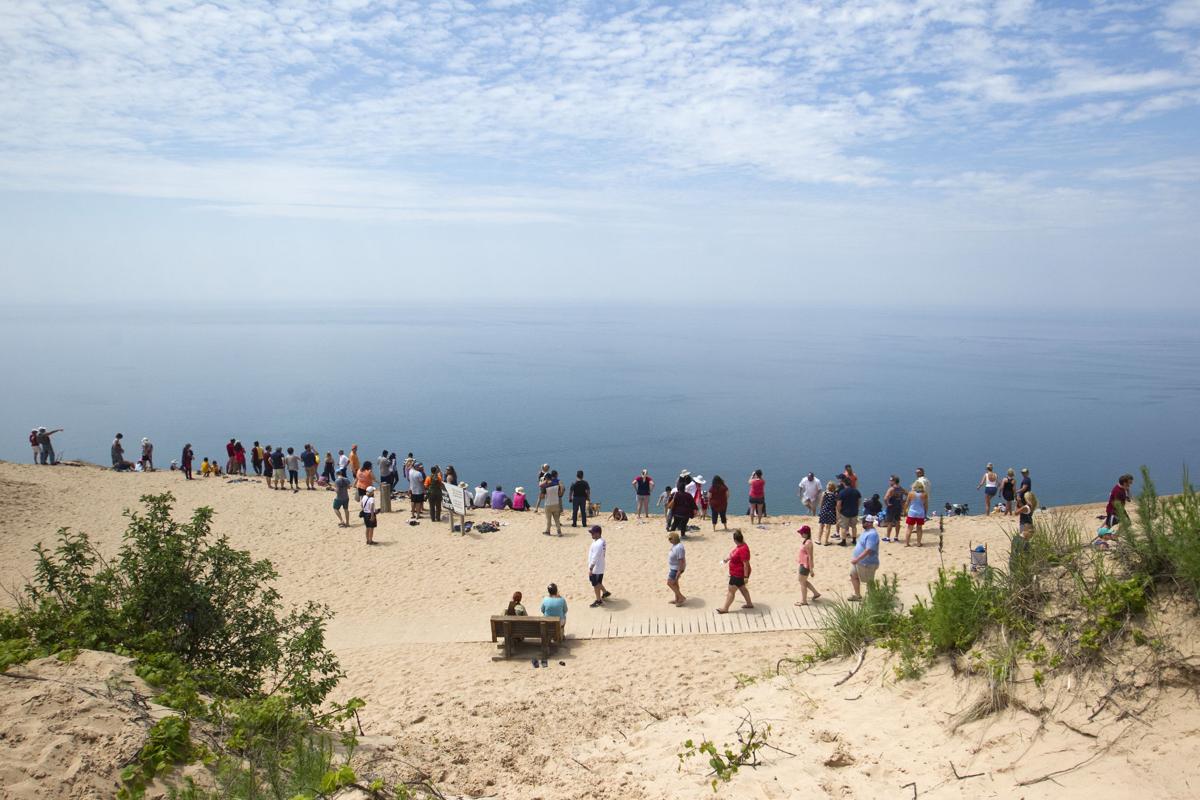 People take in the views at the Lake Michigan Overlook along the Pierce Stocking Scenic Drive in the Sleeping Bear Dunes National Lakeshore in this photo from 2019. 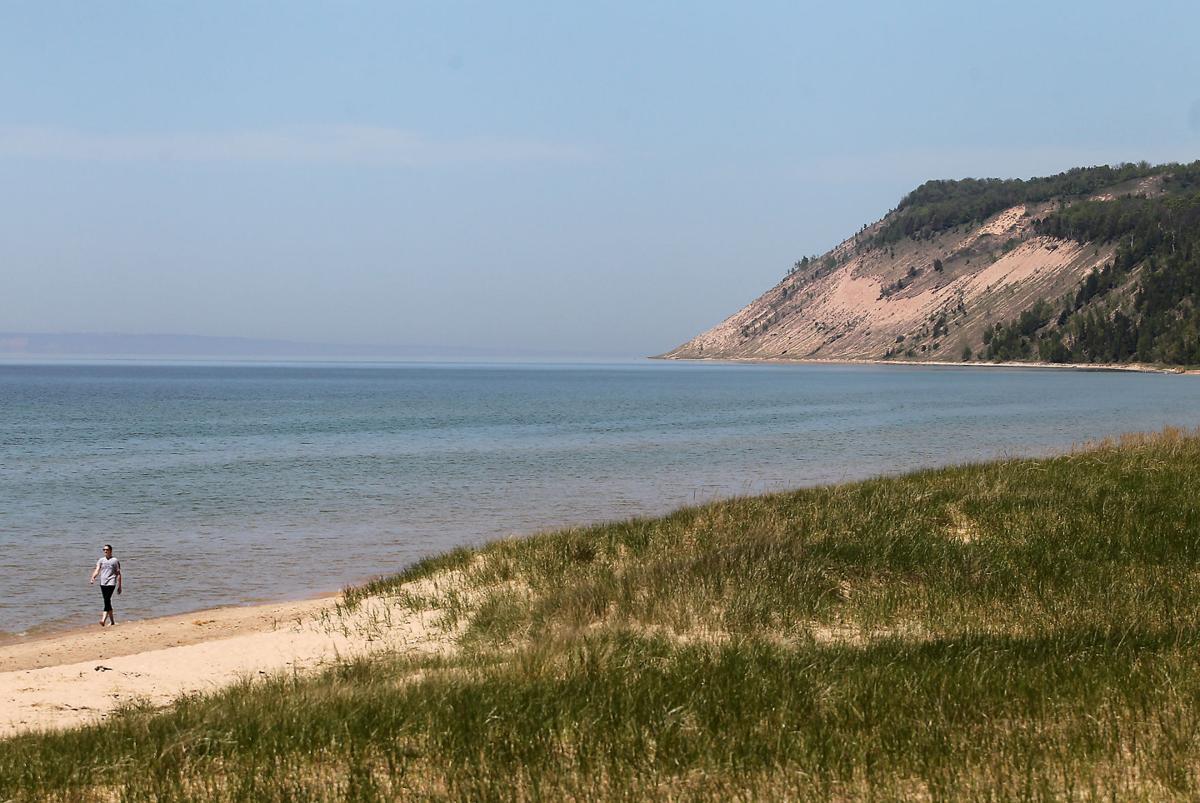 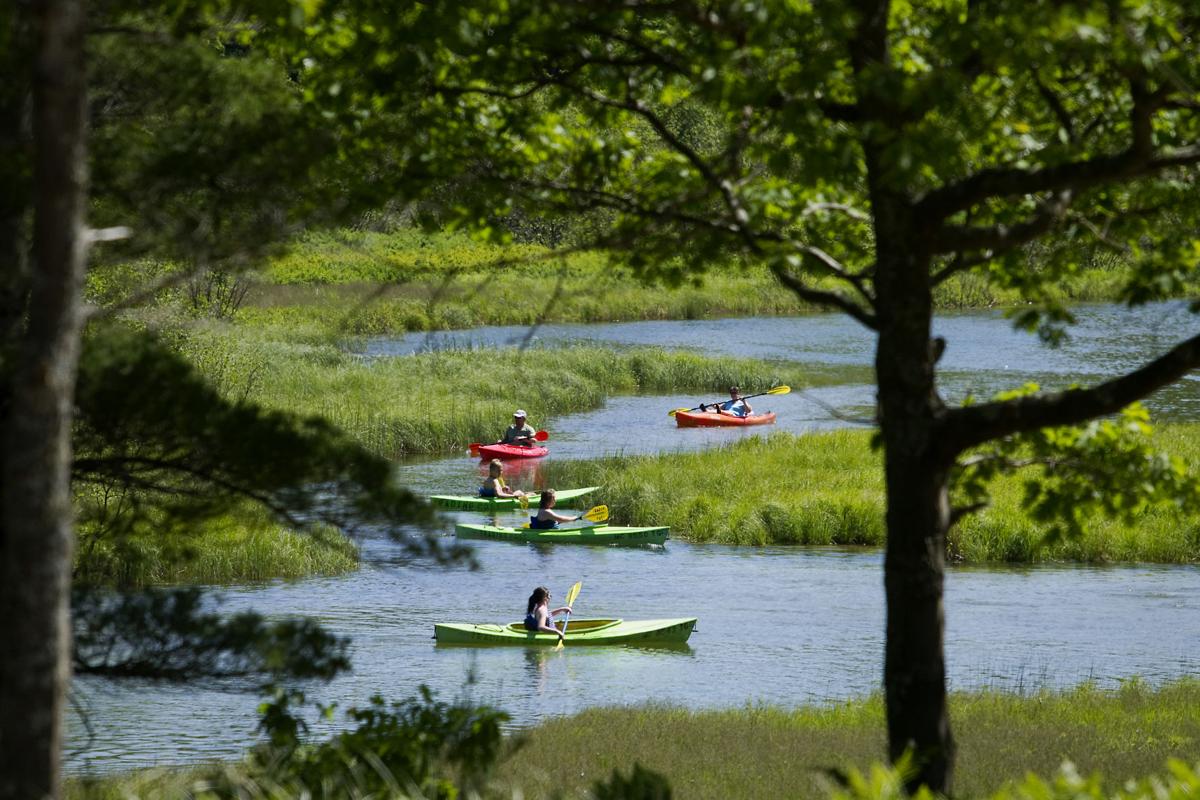 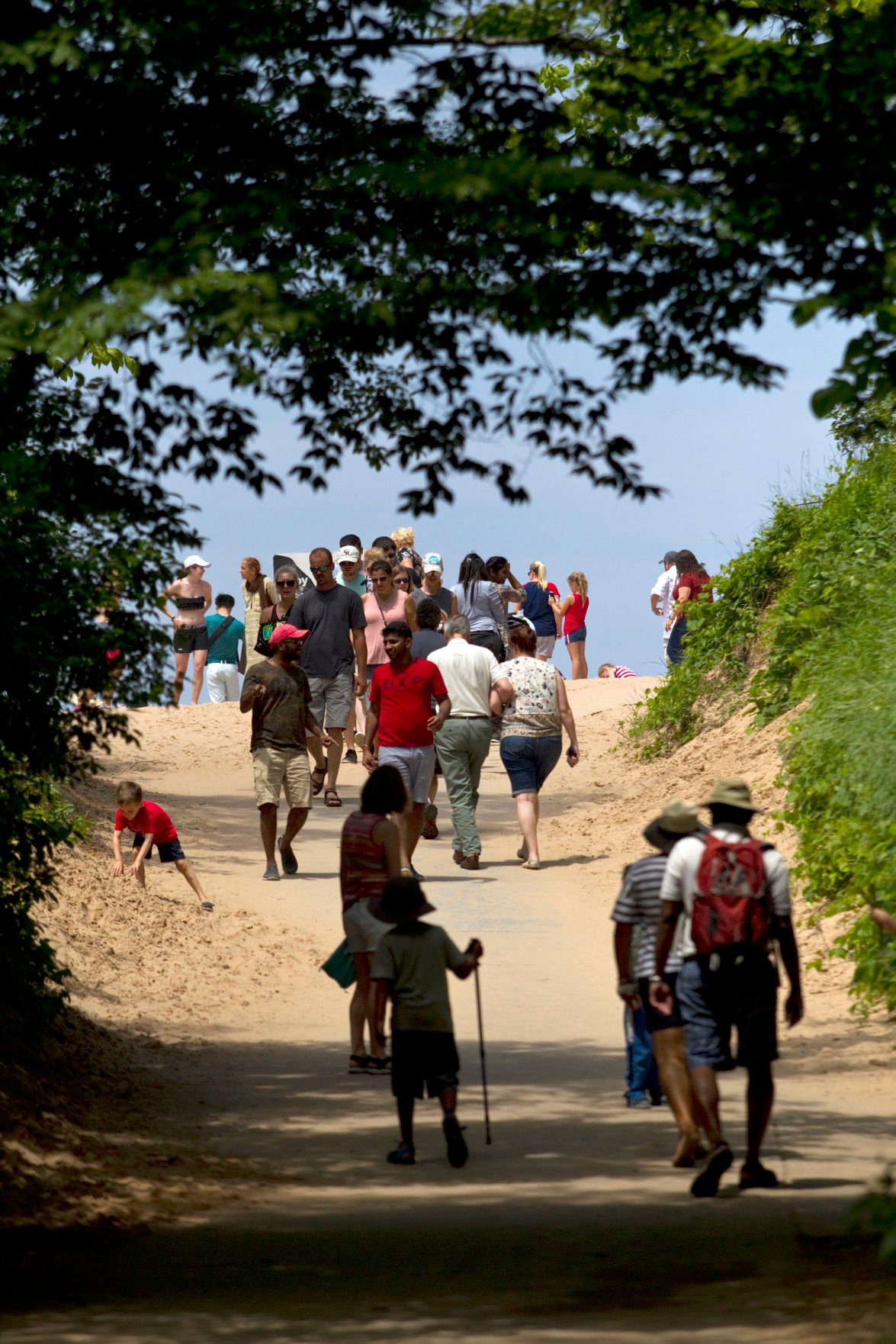 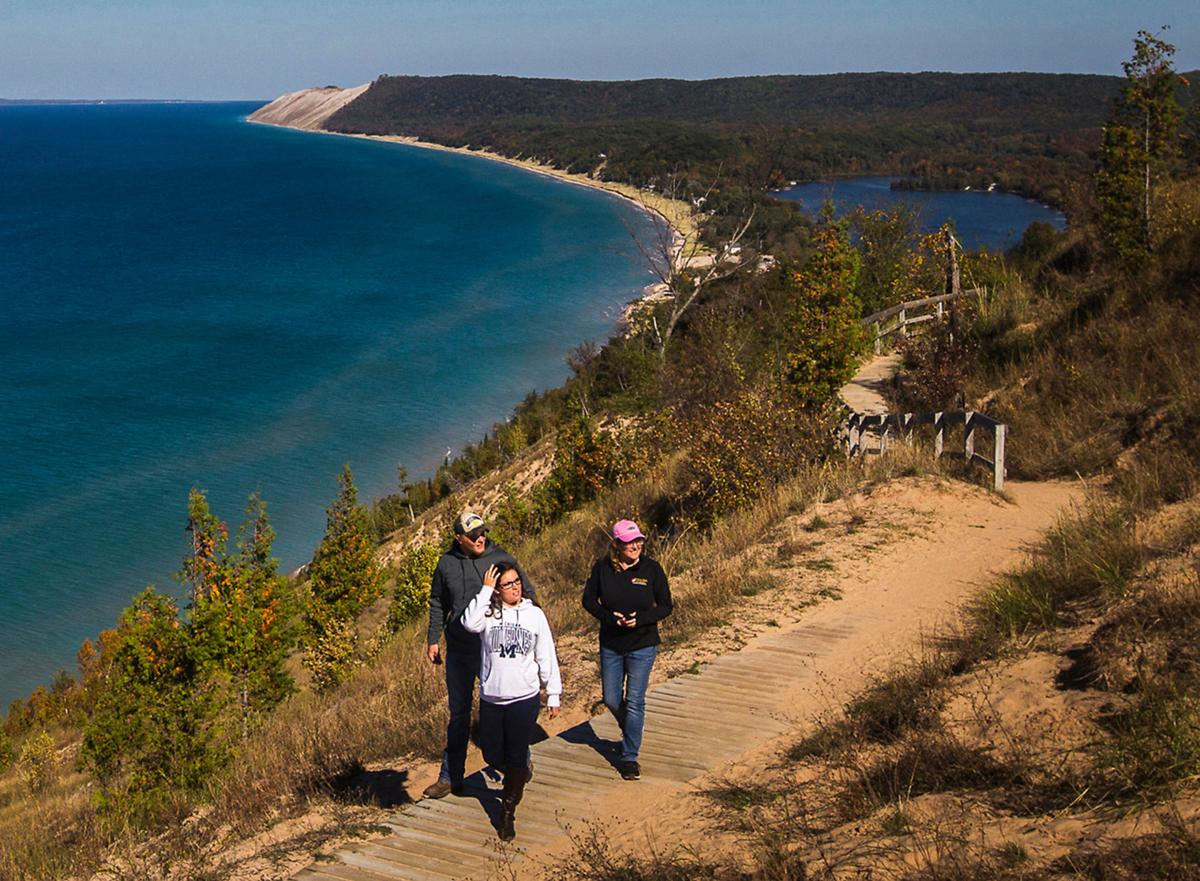 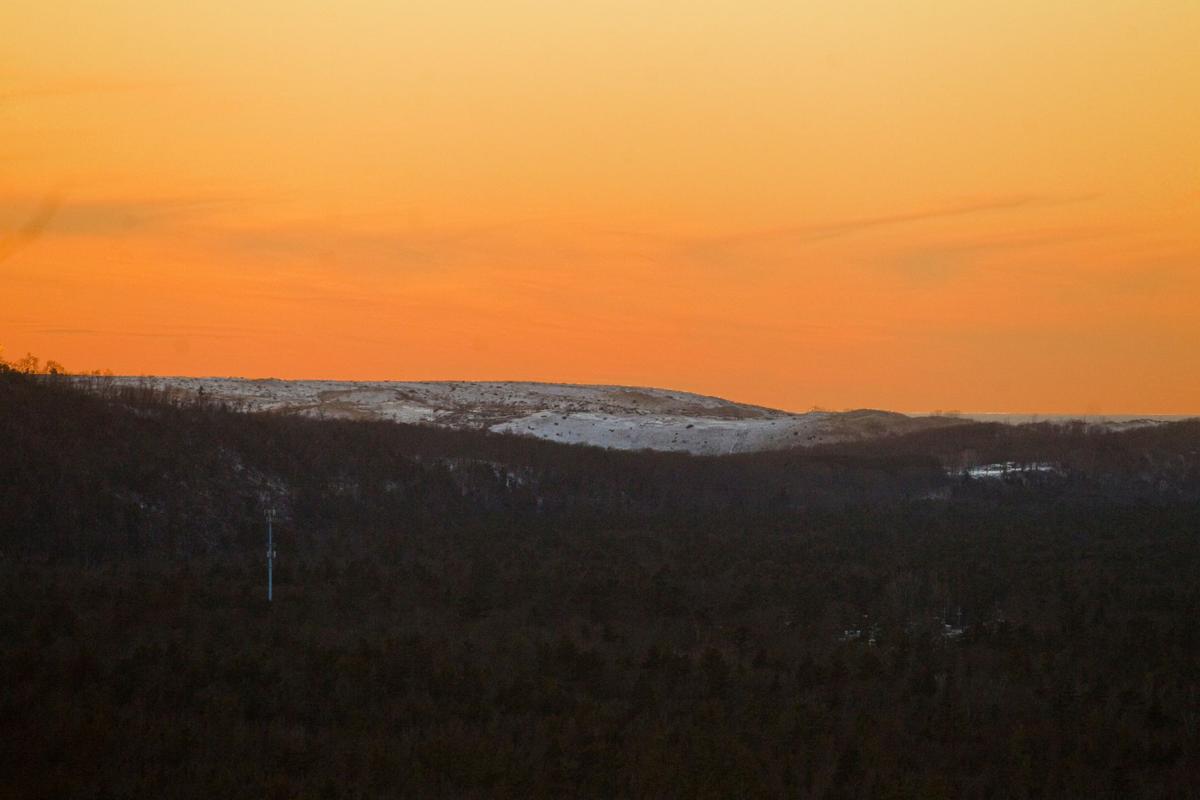 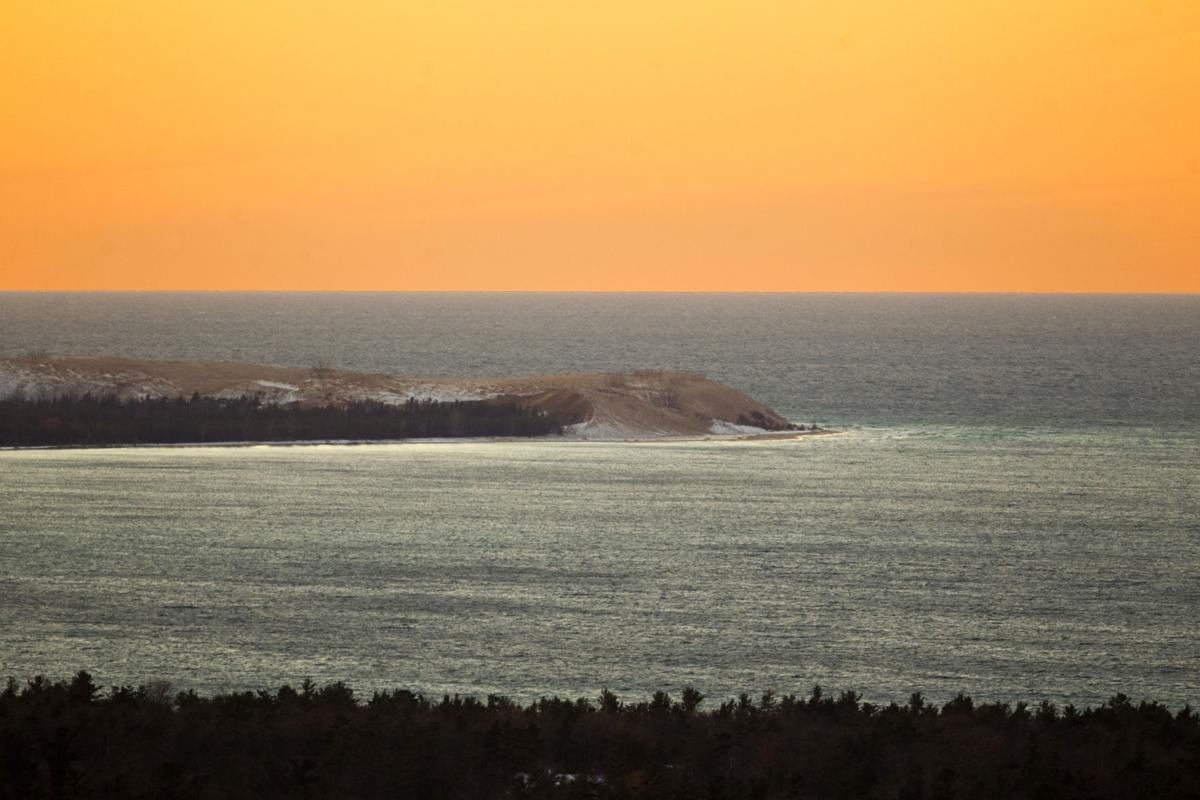 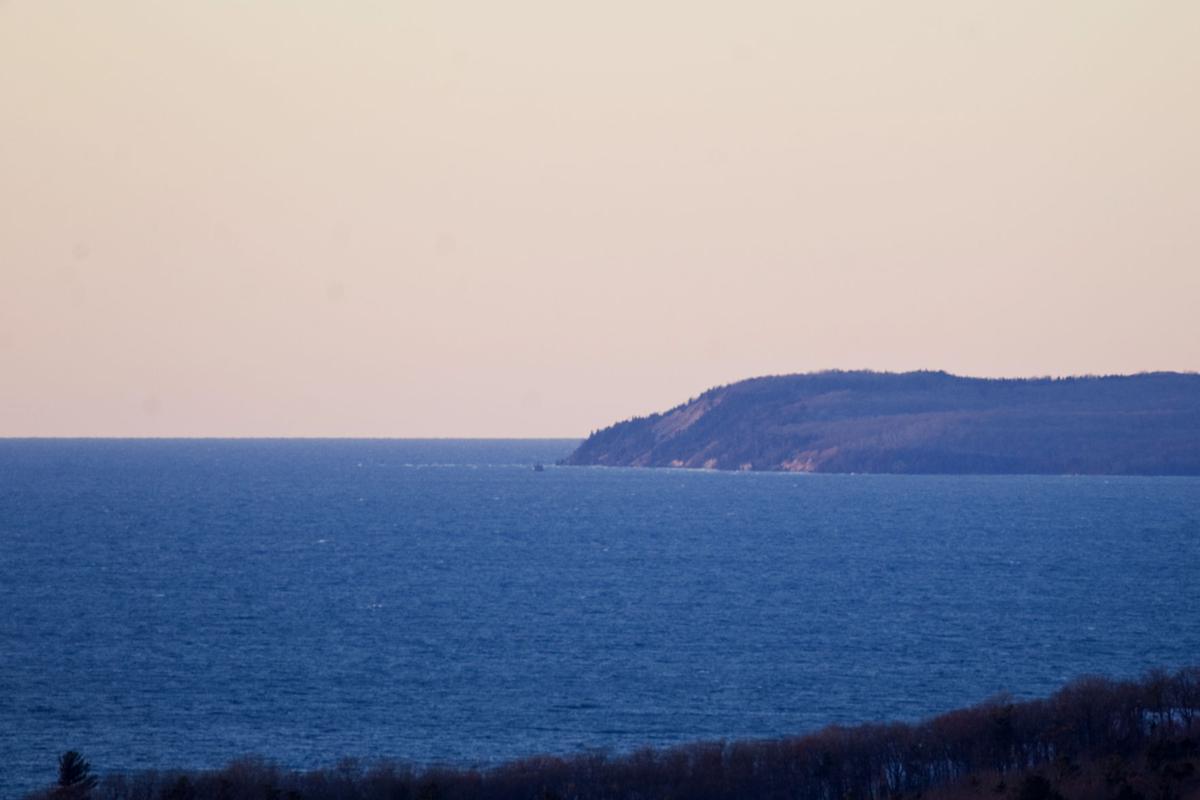 People take in the views at the Lake Michigan Overlook along the Pierce Stocking Scenic Drive in the Sleeping Bear Dunes National Lakeshore in this photo from 2019.

Years from now, when their grandchildren and great grandchildren come to visit the spot where that story began, it will be unchanged, Tucker said.

"Whether it's a new citizen or a family vacation or a wedding proposal, exploring the wonder of Sleeping Bear is something that will be there forever," Tucker said. "That's a pretty powerful idea."

Congress authorized Sleeping Bear Dunes on Oct. 21, 1970. It consists of 72,000 acres that include North and South Manitou islands and 65 miles of Lake Michigan shoreline.

There are 908 plant species and 246 bird species within the National Lakeshore, as well as 369 historic structures and 150 prehistoric archaeological sites. There are nine campgrounds, five picnic areas, two outdoor amphitheaters and one covered bridge.

It boasts 26 inland lakes, 12 miles of streams and 105 miles of trails, including the 22-mile-long Sleeping Bear Heritage Trail that stretches from Empire to Centerville Township.

Tucker said the park is unique in that it was created almost entirely out of private property. That came with some controversy as more than 1,800 individual tracts of land were purchased by the federal government, some through eminent domain.

It was difficult for landowners to give up their land, said former Superintendent Dusty Shultz, who retired in 2015. It was also a huge sacrifice, she said.

Many of them sold under use and occupancy agreements with the National Park Service, which meant they could stay on their property for up to 25 years. They were paid for the homes up front, with 1 percent of the price subtracted off for every year they would live there under the agreement. They did not pay rent or property taxes.

They could also establish a life estate, Shultz said, in which the property passed to the federal government when the youngest person listed on the deed died.

There are a handful of agreements still in place, Tucker said. There are also more than 100 properties within the park that are still privately owned, he said.

One of those is the D.H. Day Farm near Glen Haven, whose beautiful white barn is a landmark. The property is owned by Don Lewis, who also owns Crystal River Corporation near Fisher Lake.

Several of those inholders were sent letters in the past year asking if they are interested in selling their properties, as Congressional funds have been appropriated for land acquisition, Tucker said. About a dozen have responded, he said.

About 32,000 acres of the park is protected under the federal Wilderness Act of 1964, which says that areas designated as wilderness must remain undeveloped.

Shultz came on board in 2002, in the midst of a battle over the designation. Local residents were angry because they thought it would put the park off limits, she said.

"That was a big thing to overcome," she said.

The acreage got its official wilderness designation in 2014, when former President Barack Obama signed the Sleeping Bear Dunes National Lakeshore Conservation and Recreation Act into law.

Shultz said people have told her they can enjoy the park without seeing houses or any other signs of civilization. While shoreline property in the rest of the county becomes more scarce, the park remains pristine.

"It's that serenity and calmness and lack of development that really saved this area for the future," Shultz said. "It was a big thing to preserve those lands for everybody to enjoy it."

The 7-mile-long Pierce Stocking Scenic Drive is one of the most popular spots in the park. It came about when lumberman Pierce Stocking had to find a way to pay the taxes on a large tract of land he owned in the middle of what would be parkland, according to his daughter, Kathleen Stocking.

The government had offered him money for the land, but it wasn't enough, Stocking said. In about 1965 he put in a dirt road and charged cars $2.50 to take a tour through forests and dunes and past breathtaking Lake Michigan vistas.

He later accepted an offer of $3.5 million for the land, Stocking said. The drive was developed and paved and was to be named the Senator Hart Scenic Trail after Philip A. Hart, whose efforts led to the creation of the park.

But Stocking said residents rose up and insisted it be named after her father.

"He felt very strongly that natural beauty was important to human joy and the enjoyment of life," Stocking said. "Even though he was not comfortable around people, he did connect to nature and that's how he connected with people."

The park has hosted more than a million visitors per year since 1987, but set a record of 1.53 million visitors in 2012 when it was named the "Most Beautiful Place in America" by Good Morning America.

Michael Rivard is president of Sleeping Bear Gateways Council, which is working on ways the communities near the park can handle the influx of visitors.

One of the biggest challenges is finding housing for seasonal workers at the park, which has been impacted by the short-term rental market, he said. Another is congestion that occurs during peak summer visitation at some areas of the park, such as the Dune Climb, Rivard said.

"Our goal is to look forward and try to be a little proactive in understanding what visitation looks like five, 10, 20 years out," Rivard said.

Leelanau and Benzie would be very different places without the park, he said.

"If you think about the consequences of not preserving the park, it would look a lot more like Orlando."

Sleeping Bear Dunes National Lakeshore is turning 50 in October and has a year of festivities planned, starting Saturday.

What: Hibernation Celebration with snow sculpting, sledding, crafts and more.

Cost: Free with a park pass