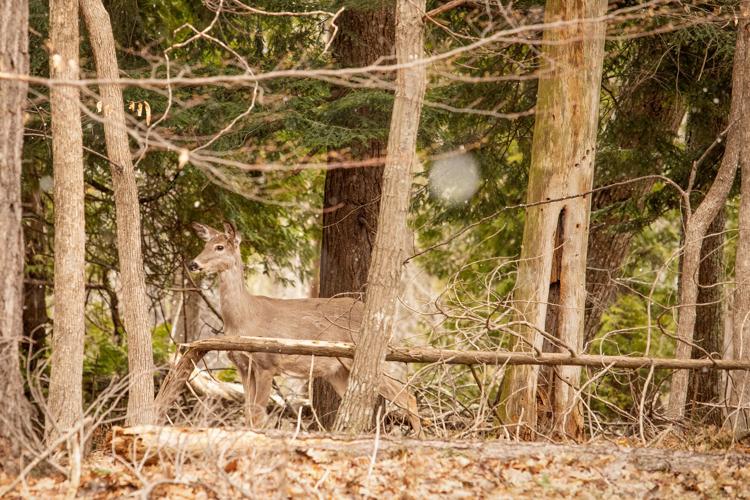 Deer hang out in the woods along M-22 in Glen Arbor. 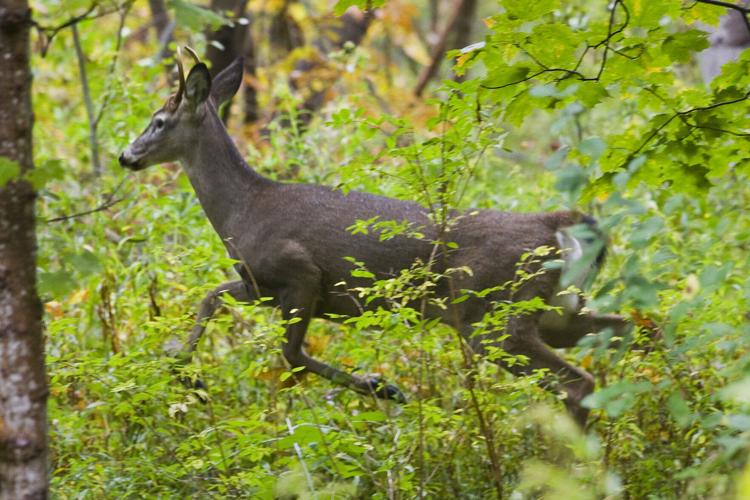 A buck runs through the woods along Randolph Street near Hickory Hills in Traverse City.

Deer hang out in the woods along M-22 in Glen Arbor.

A buck runs through the woods along Randolph Street near Hickory Hills in Traverse City.

This year, some northern Michiganders will update those traditions, as they replace lead ammunition with a non-toxic alternative.

In a novel program offered by the Little Traverse Bay Bands of Odawa Indians, tribal members with hunting licenses may exchange boxes of lead ammunition for copper ammunition at no cost.

The director of LTBB’s Natural Resource Department, Doug Craven, said the program is in its third year, and approximately 10 to 15 percent of LTBB members with deer tags have participated.

He said LTBB decided to offer the exchange program after seeing an uptick in lead poisoning among local eagles during firearm season.

“When the deer is field dressed … (deer harvesters) will leave a gut pile out there … and lead can be distributed much further into the animal, including the gut region, than people think. And then other animals eat it, eagles specifically.”

Craven said a lead fragment the size of a grain of rice is enough to kill an eagle.

Craven’s analysis is based on both his own observations and third-party research. According to a paper published by the Michigan Department of Natural Resources in September, lead toxicosis is the third leading cause of eagle mortality in Michigan, and nationally there is “a noticeable increase in the mortality beginning in October and peaking in December.”

According to the DNR analysis, lead ammunition has a tendency to fragment upon impact, with one study observing lead fragments as far as 18 inches from the wound channel, and another finding lead fragments in 36 percent of gut piles from hunter-harvested deer.

While eagle health was the initial reason behind the LTBB exchange program, it is no longer the sole motivation. Craven said his department also became concerned about human health after looking further into lead ballistics testing.

“So that’s not only a concern in terms of discarded parts, but also in terms of human consumption … We’ve since seen studies that communities who eat a larger amount of game that’s harvested with lead ammunition have elevated lead levels in people as well.”

A number of studies show a connection between wild game consumption and elevated blood lead concentration. In 2008, researchers in northern Ontario were able to specifically match the lead isotopes present in the blood of First Nations Cree tribal members with the isotopes of lead ammunition used for subsistence wildfowl hunting.

Another study, which examined processed meat from deer killed with lead bullets, found lead in 32 percent of the ground meat packages. When those researchers fed the meat to pigs, they noted a spike in pig-blood lead levels.

More recently, a study in Italy found blood lead levels doubled in a sample of wild game consumers compared to non wild game consumers. In that study however, researchers attributed the increase to the act of hunting itself, speculating that the physical handling of ammunition is a possible pathway of exposure.

Hunters may be unaware of the lead they are ingesting when they consume venison shot with lead ammunition. Jennifer Gray, a toxicologist in the Division of Environmental Health at the Michigan Department of Health and Human Services, said that lead fragments in game are often invisible to the human eye.

“Lead fragments can be too small to see or feel while chewing, so it could be that they’re present, and people may not know … some of the studies that have looked at the bullet fragments have used X-rays or other imaging to see if metal is present, [but] that’s not something people could easily do at home.”

When it comes to lead, even trace amounts of the neurotoxin can be harmful. At lower levels of blood lead levels, Gray said there are numerous possible health impacts.

Gray, in summarizing educational information provided by MDHHS, said hunters who choose to continue to use lead ammunition can take secondary measures to reduce the chances of consuming a lead fragment.

“Try to avoid hitting large bones that could cause more bullets to fragment. Talk to [meat] processors about not combining deer … Be careful about where the wound channel is — that may not get all of the fragments, but you might be able to limit or minimize the fragments in the meat by trimming a good distance around the wound channel.”

Gray added that food preparation techniques are also important in reducing exposure. She recommended choosing steaks or chops instead of ground venison, avoiding acidic substances which may promote lead absorption such as wine or vinegar, and avoiding rinsing the meat as that may further spread any remaining lead fragments.

Gray emphasized that the best thing hunters can do to avoid lead exposure for themselves and their families is switch to non-toxic ammunition.

“There is no safe level of lead in the blood, so it’s really best to minimize exposure,” she said. “[Hunters] can pick better choices in terms of bullets, or they can choose to use bullets that have lead in practice or target shooting, and then when they’re hunting, go for the lead-free bullets.”

For Donna Budnick, an LTBB citizen, the decision to switch to copper ammunition was clear.

Budnick has been an avid hunter for decades, ever since joining her father for her first hunt at the age of 12. She said she typically takes two doe per season, as well as the occasional bear, and that she and her husband butcher the meat themselves.

“We hunt for the meat, and the meat is important to our family. We eat all year long based on what we hunt. So the quality of the food is very, very important.”

Budnick exchanges a single box of her .308 diameter lead bullets every year via the LTBB program. She said she has been pleased with the performance of the copper ammunition, and she appreciates having a healthy way to feed her family.

“The idea of using copper instead of lead just seemed safer, cleaner, and making sure the food is preserved well for our family and friends … lead in food has always been a concern, but I never really put the connection together between the bullets we use and the potential contamination. So once they came out with the copper, it just made good common sense to use it.”

Additional information from MDHHS about healthy game consumption can be found by going to michigan.gov/eatsafefish and clicking on the link “Eat Safe Wild Game.”