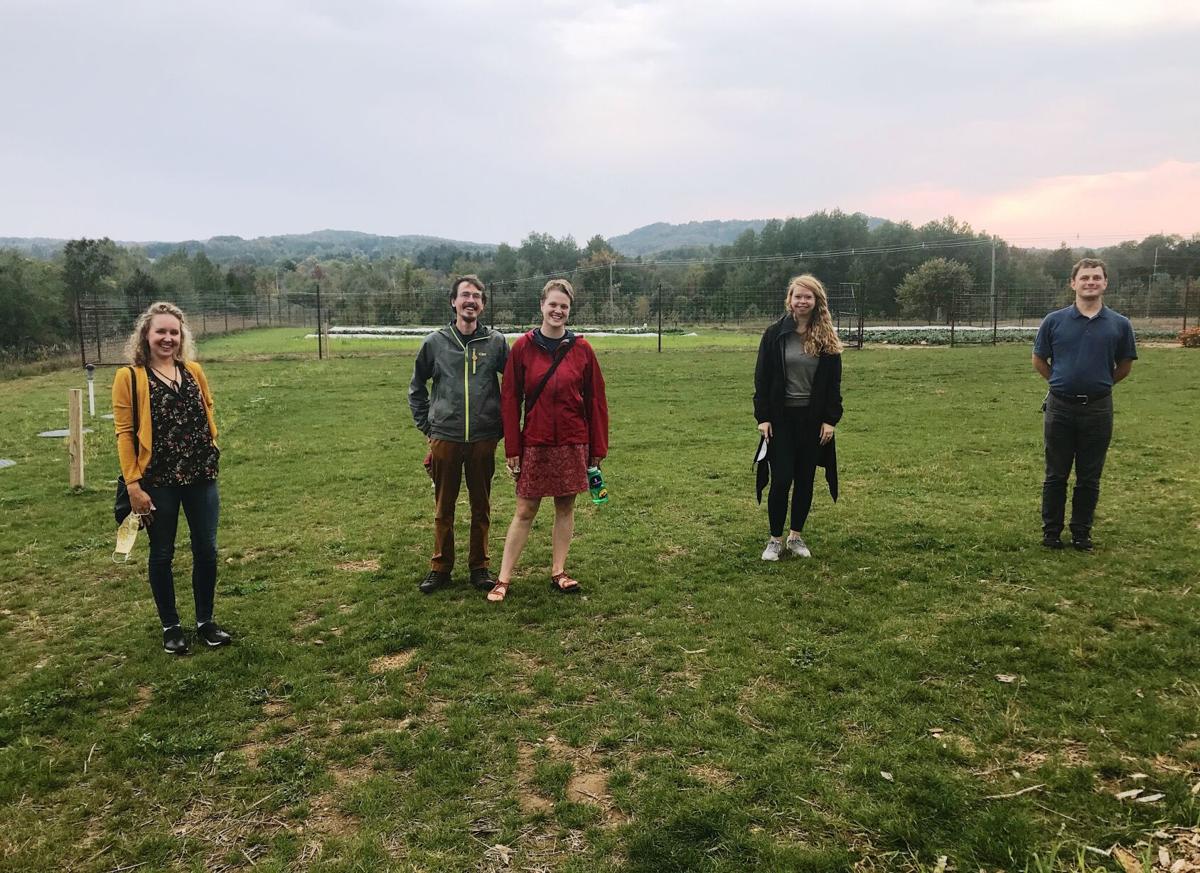 Pictured at Farm Club in Leelanau County during the inaugural event of New and Returned Northern Michiganders are group organizer Jeneil Bamberg (left) and other members of the Meetup group. 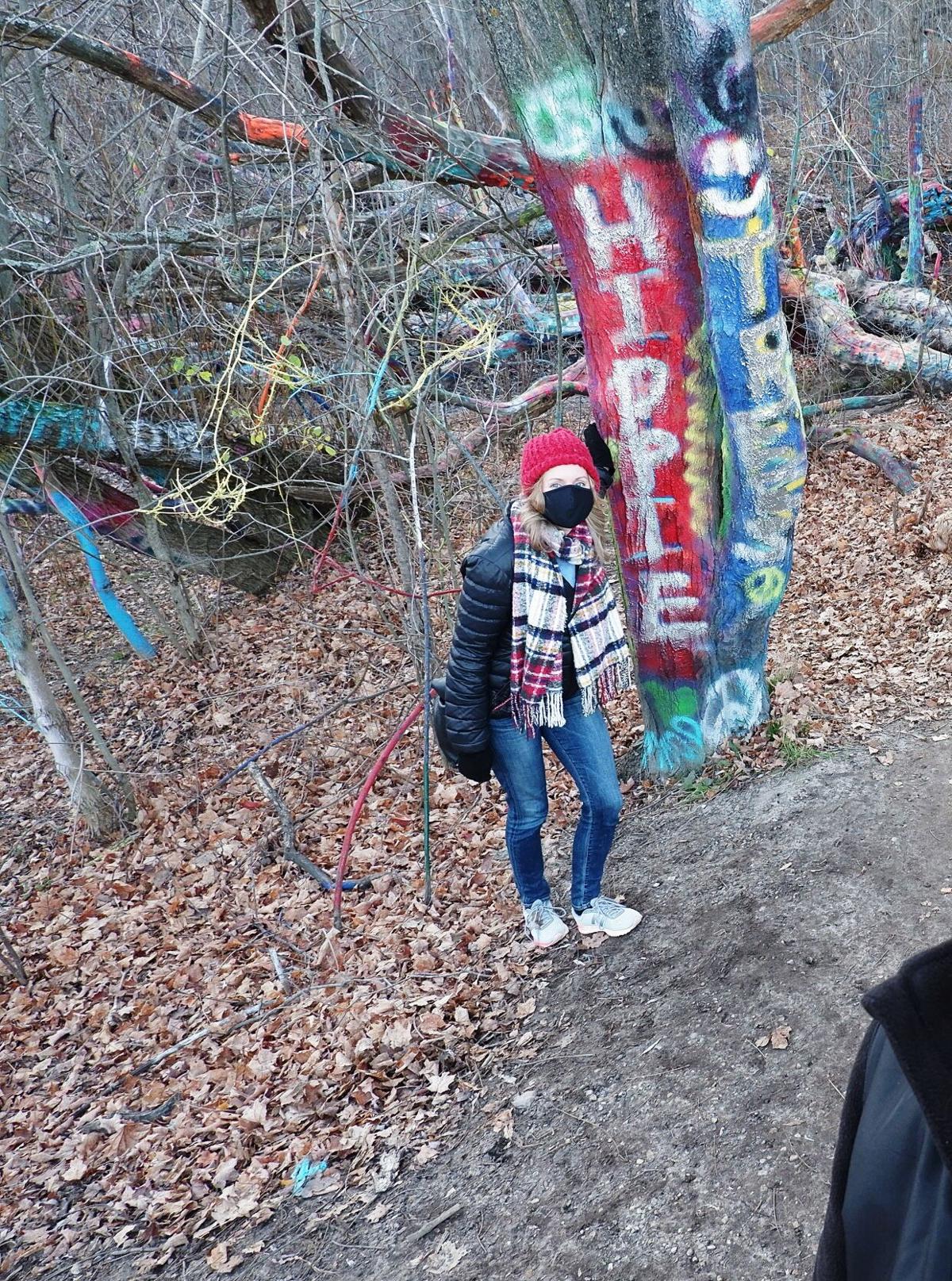 Jeneil Bamberg returned to her Traverse City hometown during the pandemic, and then relocated permanently.

Pictured at Farm Club in Leelanau County during the inaugural event of New and Returned Northern Michiganders are group organizer Jeneil Bamberg (left) and other members of the Meetup group.

Jeneil Bamberg returned to her Traverse City hometown during the pandemic, and then relocated permanently.

TRAVERSE CITY — The COVID-19 pandemic turned many lives upside down in March 2020, and for one woman who grew up in Grand Traverse County, the pandemic helped bring her home.

On the morning of March 11, 2020, Jeneil Bamberg, 36, said she was sleeping at a friend’s house in Kenya, Africa, where she had been attending a yoga festival, when she was woken by a phone call from her father in Williamsburg.

Bamberg said her father proceeded to share that her grandfather had just passed away.

Already scheduled a few days later to fly back to New York City, where she had been living for the previous 11 years, Bamberg said she immediately went about making plans to fly to northern Michigan to be with her family.

“That started a few days of logistical nightmares, because we were trying to see if I could come back even sooner,” Bamberg said, adding she was hoping to attend her grandfather’s funeral.

“Things were heating up worldwide (with) the pandemic. Lockdowns were starting to happen … We were nervous about me even being able to get back to America in time before borders were closed.”

Four days later, Bamberg said she went on her originally scheduled flight from Kenya to England, where she had a layover.

“I had to spend an overnight at a hostel inside the airport in London, which was a very scary time for me,” Bamberg said. “No one knew anything about the virus. (I) didn’t know how I could catch it … Just traveling internationally at that time was a very daunting prospect. And I had friends reaching out, ‘Where are you?’”

One of those friends was Cailley Frank-Lehrer, 35, who said she has known Bamberg since their days at Elk Rapids High School and has lived in New York City for more than a decade — alongside Bamberg for most of that time.

Frank-Lehrer said she wasn’t too worried about her friend making it back to the U.S.

“She was one step ahead of the policies that were quickly going into place,” Frank-Lehrer said of Bamberg. “She’s a pretty savvy traveler.”

Bamberg said she was lucky just to make it out of London, from which she departed the following day en route to New York City.

“Had I traveled a day later, I wouldn’t have made it back, because they were closing off flights from the U.K.,” Bamberg said, referring to the United Kingdom.

Upon arrival at John F. Kennedy International Airport in New York City, where she had a layover of three hours, Bamberg said her arrival back in America was like stepping into a strange new world.

“Things were already kind of eerie,” Bamberg said. “The airport was pretty empty.”

She said it was her first time seeing people in face masks.

“It was a little frightening,” Bamberg said. “Just the shock of understanding we’re entering a worldwide pandemic event — it’s a lot for the human brain to process, when you’re traveling like that … And I was just really focused on trying to be as safe as I could be, with having so little information on the virus.”

After the layover, Bamberg said she took a flight from New York City to Detroit and then another flight from Detroit to Traverse City.

From that point, Bamberg said she found herself effectively marooned in northern Michigan.

“We were unsure what would happen with lockdowns,” Bamberg said. “New York locked down that week, and then Michigan did a few days later. And traveling felt too dicey. I don’t think I could have even traveled back (to New York City) at the time.”

Bamberg said she stayed at her father’s residence in Williamsburg and was able to remotely work her job as a grant writer for a community health center in the Bronx, serving low-income and uninsured people.

By the time she could safely return to New York in June, Bamberg said she had decided to make her stay in northern Michigan permanent — something she had been considering periodically since 2017.

“I just had this idea that I just miss my family,” Bamberg said. “But it seemed so untenable at the time. It just seemed like — what would I do there?”

However, she said her final months of residence in New York City were a difficult time, due in part to the passing of her mother, Kathryn Bamberg of Williamsburg, in May 2019.

“(She) gave a great deal to this community as a social worker of many years,” Jeneil Bamberg said, adding her mother’s career included work at Addiction Treatment Services’ Phoenix Hall in Traverse City and North Country Community Mental Health in Charlevoix. “So that made me feel like I might want to be closer to my family and really make this a reality.”

Frank-Lehrer said she wasn’t surprised by her friend’s decision.

“I was sad to see her leave New York but happy that she had a safe place to go in Michigan and be closer to the family, and it just made sense,” Frank-Lehrer said. “She’s a very flexible, adaptable person, having lived literally all over the world. So I knew she’d make it work.”

Shortly after making the move official, Jeneil Bamberg created a local Meetup group called “New and Returned Northern Michiganders” to connect with other adults who have recently moved to the area.

“It was kind of hard to meet people initially,” Jeneil Bamberg said, alluding to her return to northern Michigan. “And that is something I do remember about growing up in the area … Sometimes it feels like you do have to search to find like-minded people.”

She said the pandemic also made meeting people that much more of a challenge.

“It was kind of lonely for a while,” Jeneil Bamberg said. “And I felt very isolated, as many people do these days with the pandemic.”

For that reason, she said the Meetup group’s inaugural event in September was a breath of fresh air for attendees.

“We all were just exuberant to be in a group, even though we were all strangers and there was a pandemic going on,” Jeneil Bamberg said, adding proper safety precautions were followed. “We were just really happy to meet new people.”

However, she said the group has been on hiatus since its last event in November.

“What I’ve done has kind of paralleled where the state is with closures, because it’s also hard to have a public Meetup group where we would want to go for a hike and then grab a drink somewhere, when no one is really open or where people just don’t feel safe,” Jeneil Bamberg said. “But I do want to get around to doing more events in the near future, safely, as far as I can.

“This year has been really hard for everyone,” she added. “But I do really strongly believe that better times are ahead. We can grow. The group can grow. And we are open and welcome to new members.”

Frank-Lehrer actively supports her friend’s Meetup group, as she even attended the group’s last event in November when she was in town visiting.

“She put a lot of work into thinking through how to find some safe, low-risk activities for folks who returned to the area to be able to meet and connect, and I support that idea,” Frank-Lehrer said of her longtime friend. “And I’m still very connected to Michigan … I return when I can and love the natural beauty and love being able to go out and be in the outdoors.”

“It’s been really great for me in so many ways,” she said. “It’s been cool to be here as an adult and see that there are other like-minded adults in the community.

As the one-year anniversary approaches, Jeneil Bamberg said she’ll never forget the date of March 16, 2020 — when she returned to northern Michigan during a unique time in history.

“I have found myself here ever since,” she said.