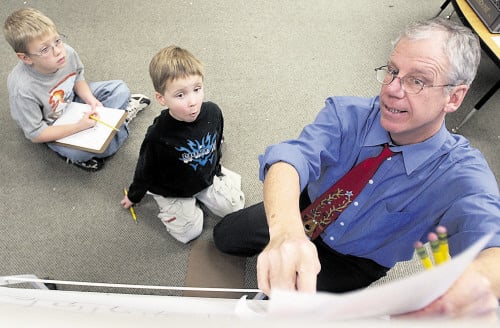 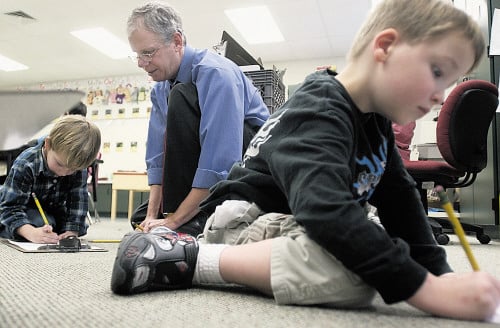 The room around him hints of fun and discovery, from the string of hand puppets representing letters of the alphabet to the plastic tubs crammed with crafts supplies to the glass tank on the kid-size counter where Autumn, the corn snake, sheds its skin.

"That's the beauty of kindergarten: it's one of the last ages where they can still explore," said Hood, one of two all-day, every-day kindergarten teachers at Lake Ann Elementary. "And there's no better joy than their sense of discovery."

At a time when the percentage of male elementary teachers is at the lowest level in four decades -- 9 percent -- Hood is an anomaly. At national kindergarten meetings, he is sometimes outnumbered by female colleagues 80 to one.

But instead of feeling chagrin at being a rare man in a traditionally woman's domain, Hood said he enjoys being a role model for his school and its students -- especially those lacking male figures in their lives.

"A male can teach them appropriate touch, a good hug, how to use words instead of fists," said Hood, who reinforces the gentlemanly ideal by wearing a tie every day. "It's more of a professional role model than a male role model."

A self-described late bloomer, Hood arrived at his career gradually. A 1973 graduate of Interlochen Arts Academy, where his father was director, he attended Northwestern Michigan College for only a year before deciding he wasn't ready for higher learning. After working at a commercial silver shop in Williamsburg, Va., he struck out for Europe and spent the next 10 years traveling and working in youth hostels.

It was in Switzerland, after agreeing to teach English to ski instructors anxious to communicate better with their foreign students, that he discovered the rewards of education.

"That sort of got me interested in English. A few years later I ended up in Thailand and taught English and German," he said. "And then I was hooked. I knew I wanted to teach something somewhere."

Back in the states, Hood took a job as director of cross-country skiing at Crystal Mountain, where he helped build the resort's trails. And when the same college he'd dropped out of established a University Center, he was one of its first enrollees. He entered the Central Michigan University early education program where he now teaches two early development classes.

At Lake Ann, where he has taught kindergarten or first grade since the school was built seven years ago, he guides the development of two dozen youngsters with names like Payton, Connor, Kaytlyn and Allison. Besides preparing them to meet No Child Left Behind mandates, his aim is to allow them to discover the social, academic and natural world around them through play, direct instruction, peer interaction and diverse experiences.

"My goal is that they sort of become autonomous, that they don't need me," said Hood, who spends up to an hour and a half each day preparing materials for class. "When my kids are being capable, independent learners, that's my success."

It's a demanding job, one that Hood said some polls have rated second in stress only to air traffic controlling. That's precisely why more men don't do it, he believes.

"It's too hard: the patience, the preparation, the willingness to tie shoes a thousand times a day, to wipe noses," he said. "I don't think many people have the patience. I don't think they find the joy in the basic skills."

Then, too, while Michigan ranks in the top five nationally in teacher pay, salaries are often lower for elementary teachers.

"Unfortunately, that's a huge consideration," said Lake Ann Elementary Principal Gail Wheeler. "And it should be."

"He has that 'male figure' with these little guys and he just relates very well to them, as well as to parents," she said. "He does a really nice job.

"I know kindergarten teaching is unusual for males, but I don't know why," she added. "Because for males like Brett and (Betsie Valley Elementary teacher) Tom Luebke, it's a great fit."

The father of two adult children and son Tigran, a fifth-grader at Lake Ann Elementary, Hood believes coming to marriage and teaching later in life better equipped him to deal with "24 independent personalities who don't know the rules."

"Life experience has been very beneficial in terms of knowing what I was capable of," he said. "Knowing I could teach a group of 30 Thai men American humor -- and they didn't speak English -- taught me I was capable of learning to meet the needs of kids at their level. If I'd done this at 22, I'd have gone by the book."

Now, he says, he'd rather teach kindergarten than any other grade. And while other teachers may measure success by their students' MEAP scores, Hood takes pleasure in his charges' smaller achievements -- even if it's just learning to tie a shoe.

"It's the energy," he said. "They are on fire. They love being here, and they love you. And they feel good about themselves.

They haven't learned there's anything they can't do."