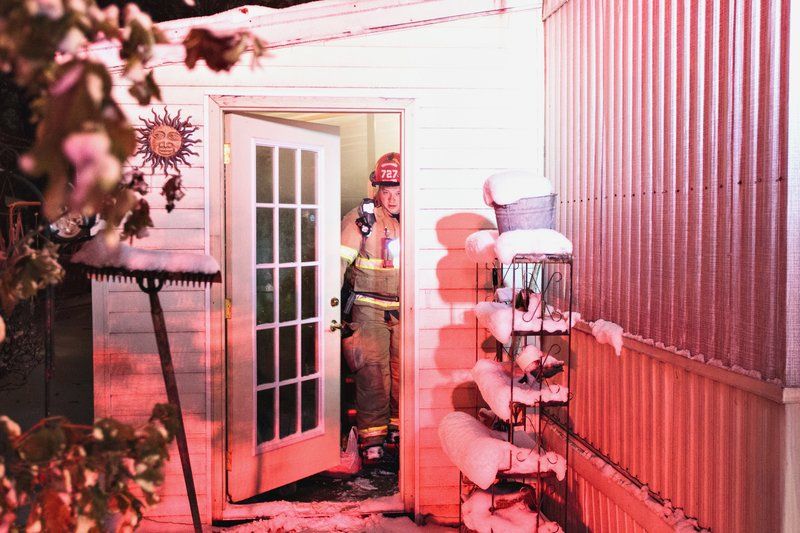 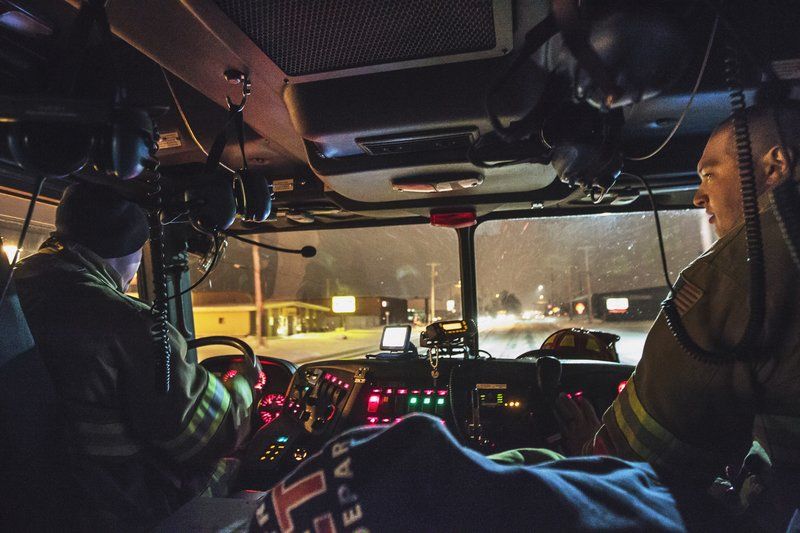 Record-Eagle/Pete RodmanGrand Traverse County Fire Department firefighter Steve Meek, left, drives as Lt. Nick Lemcool navigates on their way to a fire call. The two talk sparingly, knowing the other one has their back. “You gotta trust who you work with at this job,” Meek said.  Lights are flashing as Meeks pulls the horn and Lemcool looks at the map. “The worst feeling you can have is missing where you are going,” Lemcool said. “(With Meeks) I don’t have to worry about it.”

Record-Eagle/Pete RodmanGrand Traverse County Fire Department firefighter Steve Meek, left, drives as Lt. Nick Lemcool navigates on their way to a fire call. The two talk sparingly, knowing the other one has their back. “You gotta trust who you work with at this job,” Meek said.  Lights are flashing as Meeks pulls the horn and Lemcool looks at the map. “The worst feeling you can have is missing where you are going,” Lemcool said. “(With Meeks) I don’t have to worry about it.”

TRAVERSE CITY — It starts like a pebble in a pond. A tiny plop. Then the ripples start, extending in every direction until they touch everything.

Jennifer Williamson can close her eyes and see the cabin in the woods of her childhood. The smell of wood smoke. The crackle of sticks under running feet. Little triggers, big reactions.

The young woman recognized her pain and tried to deal with it herself, mostly by putting her head down and working hard. The quiet student excelled in school. She works hard in her bank job and raised a son she’s proud of. It never occurred to her that she might have post-traumatic stress disorder, she said.

But then Williamson heard her own symptoms echoed in someone else’s story within the safety of a support group circle. And suddenly, certain mysteries in her life made sense, she said.

“I didn’t realize this manifestation was why I was blowing off good opportunities or in who I picked to be with. I knew I could do better but I didn’t know why.”

She initially resisted the idea of a support group, but her counselor affirmed that people who experience the same type of trauma connect to each other in a special way. Williamson, never medically diagnosed with PTSD, found sharing helpful to moving forward.

A number of incidents can cause PTSD to develop, including: combat exposure, child sexual or physical abuse, adult sexual/physical assault, serious accidents and natural disasters.

The condition can be isolating, and often realizing that you are not alone — that others share that trauma — can be a powerful push toward healing, said Jonathan Shay, a psychiatrist and PTSD expert. The long-time veterans mental health advocate touted the importance of peer-to-peer conversations on several recent visits to Traverse City hosted by A Matter of Honor, and said shared experience can dissolve the divide sometimes present in a traditional counselor-client relationship.

“Peers are the most important part of the equation,” Shay said. “Peers are life-saving. Someone with the alphabet salad is not as effective as someone who has walked in their shoes.”

But creating that space is a challenge as some groups prone to PTSD, like soldiers, aren’t traditionally big into “touchy-feely” sharing.

Death in all its grisly detail is a part of the daily toil for firefighters and first responders who often are the first to reach suicides, fatal accidents and medical emergencies. But seeing it more doesn’t mean feeling it less, said Pat Parker, Grand Traverse Metro Fire Chief.

“With burns ... there are days where I wish my mind could forget what my eyes have seen,” Parker said. “Death is a part of the job, but it still bothers people.”

Sometimes exponentially — as firefighters, like soldiers, police officers and first responders are expected to “keep that tough outer shell intact” at all times, making it harder for people to come forward with difficulties coping.

Parker is always on the lookout for signs of trauma, which can manifest itself in his employees’ missed work, substance abuse and divorce. Not everyone wants to talk to the chief or chaplain he said —people fear that it will impact their job — so he encourages his employees to talk to each other. It doesn’t have to be anything formal; sometimes just rapping around the dinner table can off-gas some of the emotional impact of “a bad scene,” he said.

“I tell them, ‘Help is what we give when someone is having their worst day’ and that it’s okay to talk about it,” Parker said. “You want to make sure to check on that person, everyone involved. You check, you ask if they want to talk. A lot of times they work it out among themselves.”

Professional guidance can help create a safer space for sharing, said Susan Britten, a limited license counselor at Traverse City’s Womens Resource Center. She screens participants and facilitates the sexual assault support group to prevent re-trauma, which can happen when dealing with difficult memories — yours or someone else’s, Britten said.

“Sometimes it’s too fresh, and people can get re-traumatized in a group dynamic,” Britten said. “You want to make sure they can be in control. We welcome tears, but make sure no one gets retraumatized or experiences panic attacks.”

“Traditionally, it’s really hard to get anything out of them and it’s a huge success that they’re there. Many life choices have been built around total avoidance and detachment,” Britten said. “But that first time she opens up about her experiences, and sees the parallels in her peers’ stories, and how she is supported, understood and not judged — it’s a whole different level of healing.”