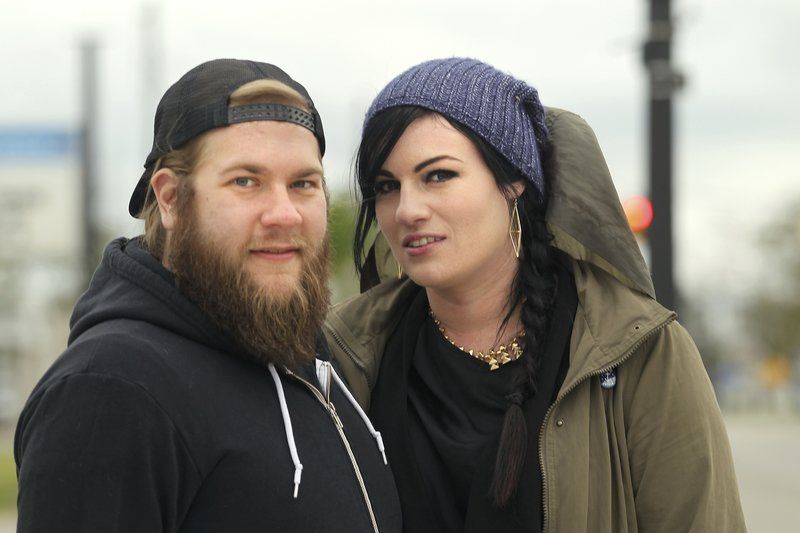 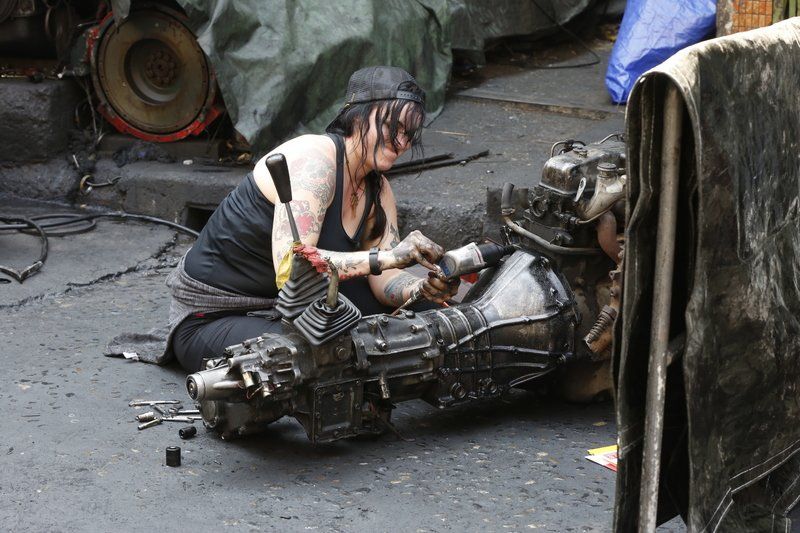 Rochelle Nevedal disassembles an engine to find the piece that doesn't belong, a screwdriver containing the words "Metal Castle", on "The Amazing Race Friday, March 13 on the CBS Television Network. 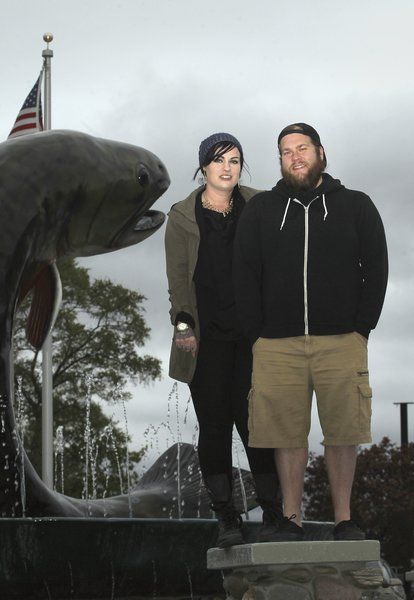 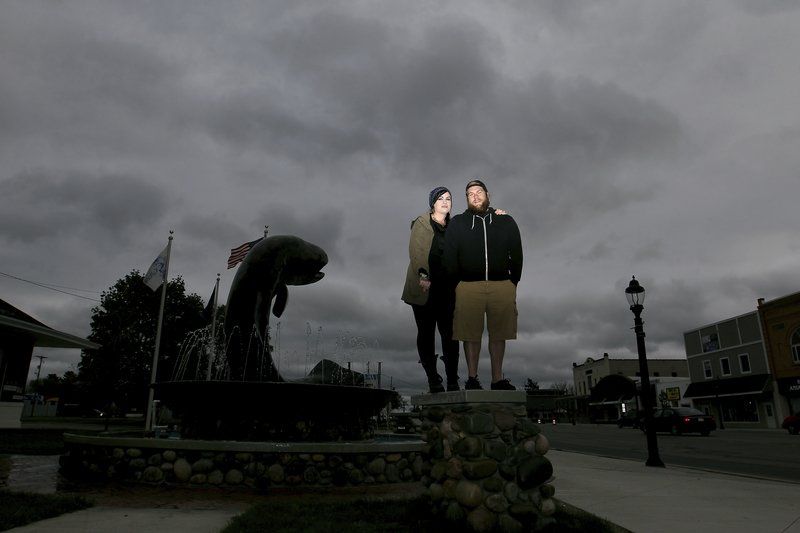 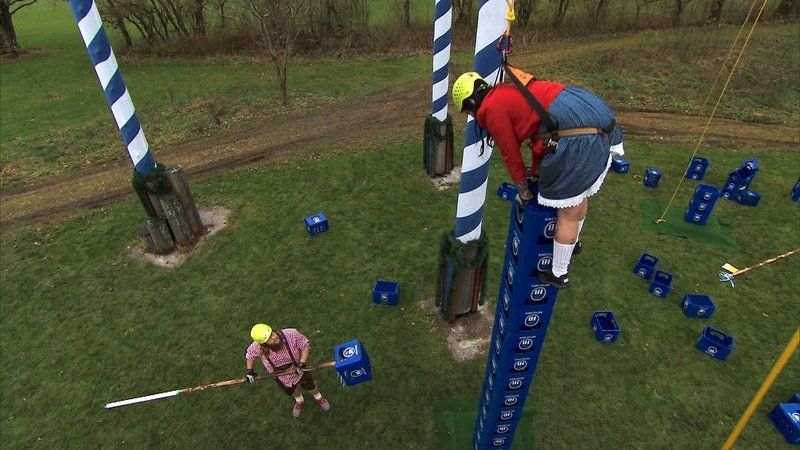 Mike Dombrowski (left) and Rochelle Nevedal (right) stack 15 beer crates in order to receive the next clue on "The Amazing Race" April 3 on the CBS Television Network. 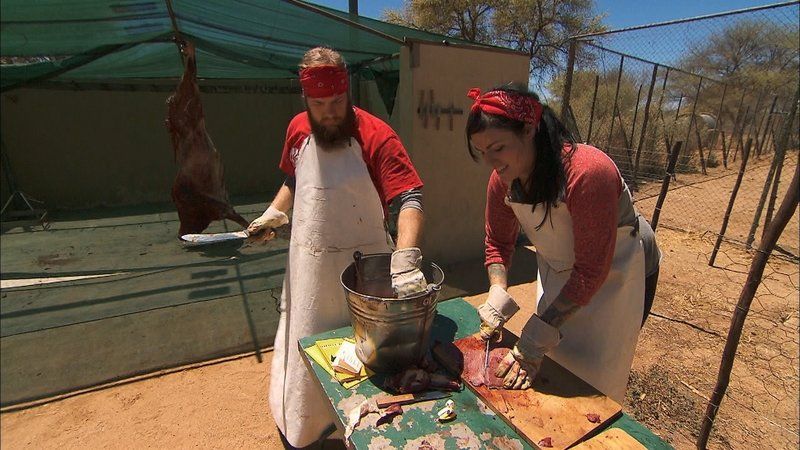 Mike Dombrowski (left) and Rochelle Nevedal (right) carve and prep meat to feed to wild dogs on "The Amazing Race," April 17 on the CBS Television Network.

Rochelle Nevedal disassembles an engine to find the piece that doesn't belong, a screwdriver containing the words "Metal Castle", on "The Amazing Race Friday, March 13 on the CBS Television Network.

Mike Dombrowski (left) and Rochelle Nevedal (right) stack 15 beer crates in order to receive the next clue on "The Amazing Race" April 3 on the CBS Television Network.

Mike Dombrowski (left) and Rochelle Nevedal (right) carve and prep meat to feed to wild dogs on "The Amazing Race," April 17 on the CBS Television Network.

TRAVERSE CITY — Mike Dombrowski and Rochelle Nevedal would jump at a chance to repeat the grueling adventure that took them 35,000 miles across eight countries.

“We didn’t win the $1 million, but we ultimately won,” said Dombrowski, 26, who recently moved in with Nevedal and her son, Nehemiah, in Kalkaska. “We made it to all 12 legs, we were the last previously dating couple.”

The couple finished fourth on Season 26 of the reality TV show “The Amazing Race," which aired its finale May 15. They watched the episode with castmates and their families at a CBS viewing party in New York City.

“It was nice to see (co-winner Tyler Adams) parents’ reaction to the money,” said Nevedal, 29. “They had no idea.”

The season was shot in November 2014 but contestants were barred from talking about it until after the finale. Keeping the secret from family and friends for so long was difficult, especially in a small town like Kalkaska, where Dombrowski is a wrestling promoter and Nevedal is co-owner of the Small Town Outlaws roller derby team, Dombrowski said.

“It was super-hard. We had been through so much to keep on the show and we couldn’t tell anyone,” he said. “A lot of my friends tried to get it out of me but I kept it under wraps.”

The couple were among six dating pairs and five “blind date” couples who started the race, in a new show twist. Most became friends during the course of the show despite editing that often portrayed their more competitive side.

“One of the cameramen said this is the best cast friendship-wise,” said Dombrowski, who especially bonded with physician Blair Townsend of Amelia Island, Florida. “We were a tight-knit cast.”

Dombrowski and Nevedal were portrayed as two of the nicest contestants, treating the locals and others well wherever they went and remaining consistently even-tempered, even when the challenges — including carving a wildebeest in Africa, building a beer-crate skyscraper in Germany and kicking a field goal in a U.S. football stadium — seemed overwhelming.

“There’s definitely moments where I broke down and Mike stayed so level-headed,” said Nevedal, who started a new job in the Internet department of Traverse City's Fox Motors since the show began airing. “I’ve never met anyone who’s been so composed and supportive of me.

“The hardest leg was in Peru when I had to ride (a native reed boat through the surf). I really physically couldn’t do it. What (video footage) didn’t show was that I was in the water for an hour. And the whole time I was getting slammed on the ocean floor, and it was really rocky. And on top of that, we were convinced we were going home.

“He knew how to bring me up when I was feeling low. I can’t think of a better partner.”

The show was not only a test of their physical and mental agility and endurance but also of their budding relationship. The two had only dated for a few months before they applied to be on the show.

“There was a lot riding on this,” said Dombrowski, who manages his family's Mancelona truck stop. “I knew I had to perform at my best. I’m not in the best physical shape, I’m not the best driving a stick-shift or navigating. But it showed who I am, showed us never giving up.”

The experience also broke down Nevedal’s normal reserve and opened her eyes to the wider world.

“When you live in a small town it’s easy to get wrapped up in this small little web and not realize how much is out there,” she said, adding that she hopes to return with her son someday to Nambia, Africa. “I mainly went on the race for the opportunity to travel and I knew (being in the spotlight) would be part of it. It made me come out of my shell.

The couple, who now get recognized everywhere from Chicago O’Hare Airport to New York City streets, say they would love to do an all-star or fan-favorite version of the show. Meanwhile they’re happy to settle down for awhile and plan a spring or summer trip to Prague, a prize they won on the show.

“It was just a whirlwind experience so it will be nice to get back to normal life and enjoy our relationship,” Nevedal said.