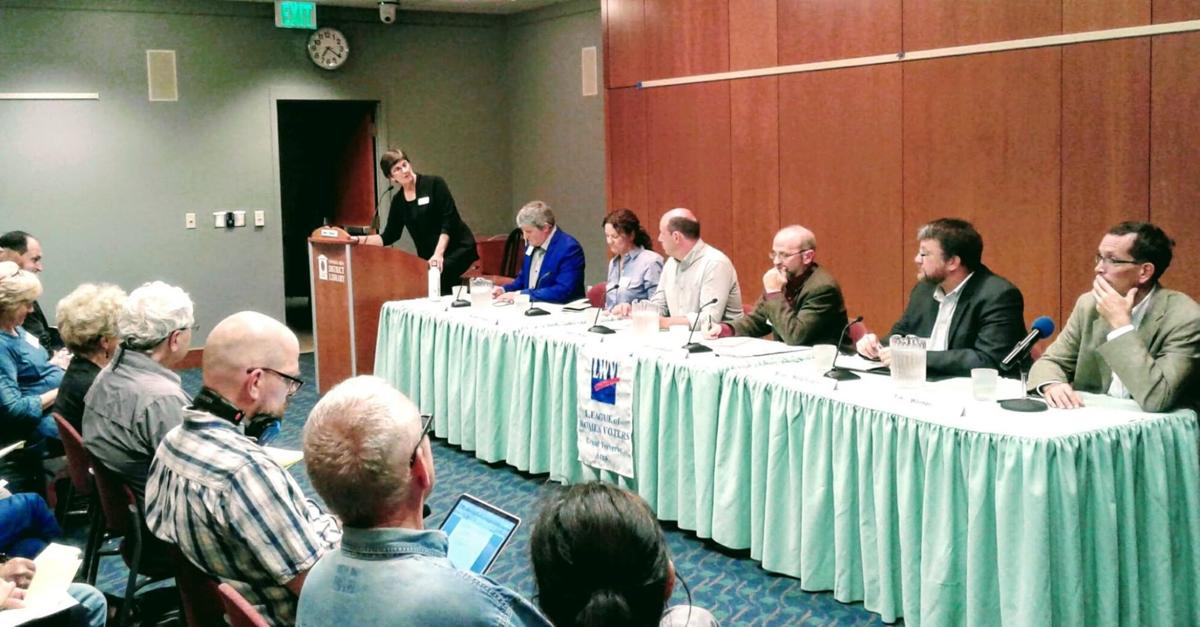 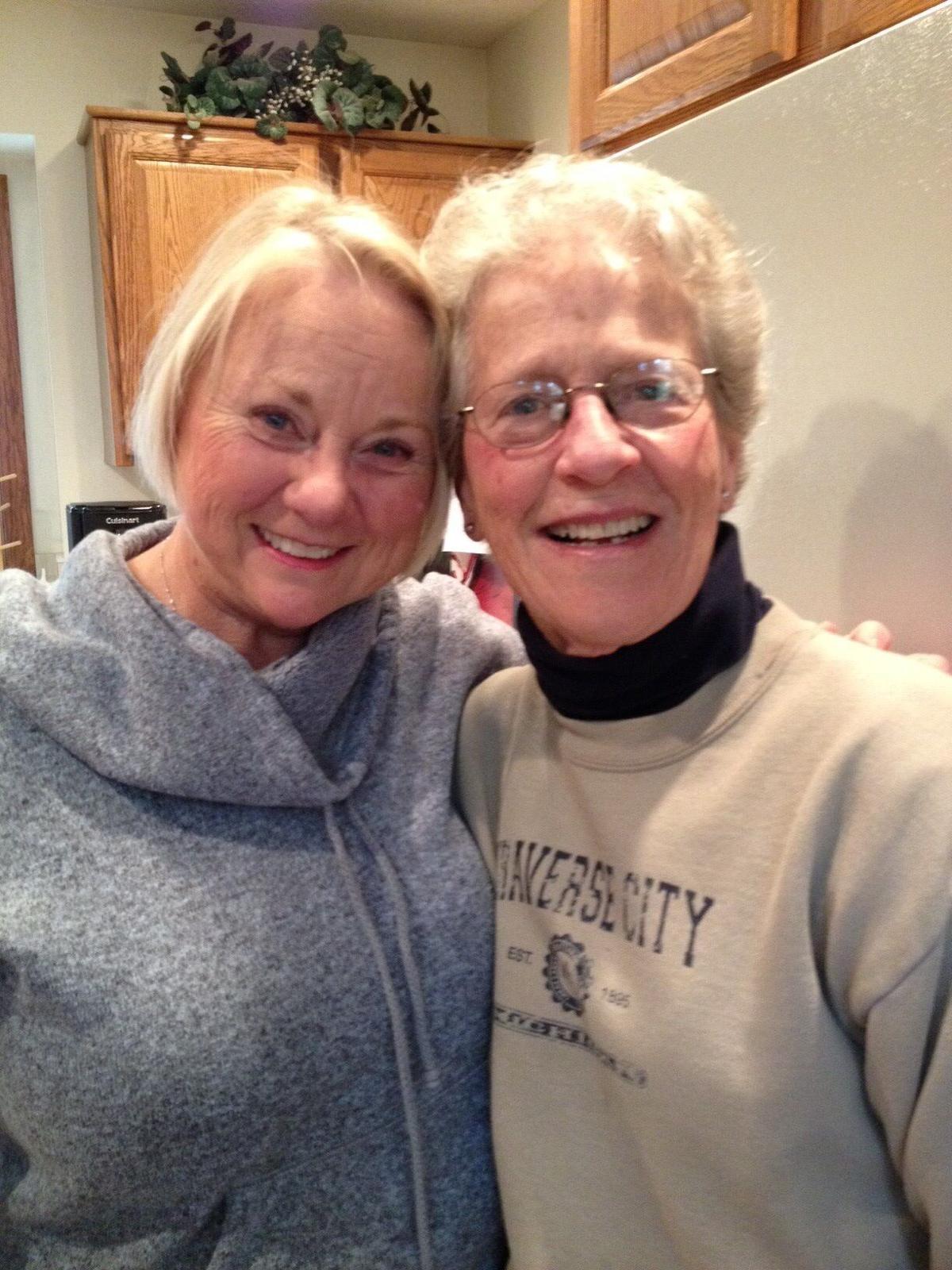 Friends and fellow League members Jane Watts and Ingrid Brophy, at the time co-chairs of the 2013 LWV-GTA wreath sale. 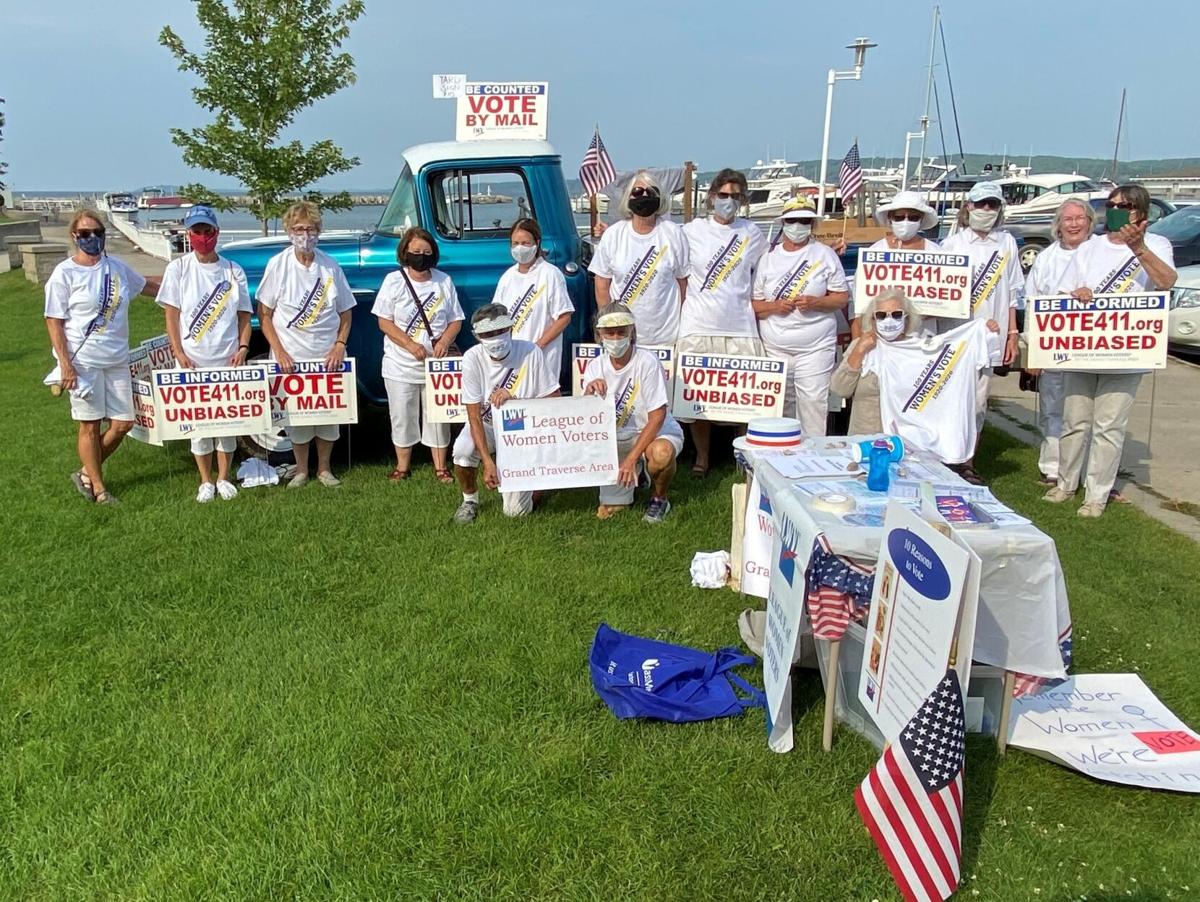 League members gather at the Open Space for the Aug. 26 celebration of the passage of the 19th Amendment. 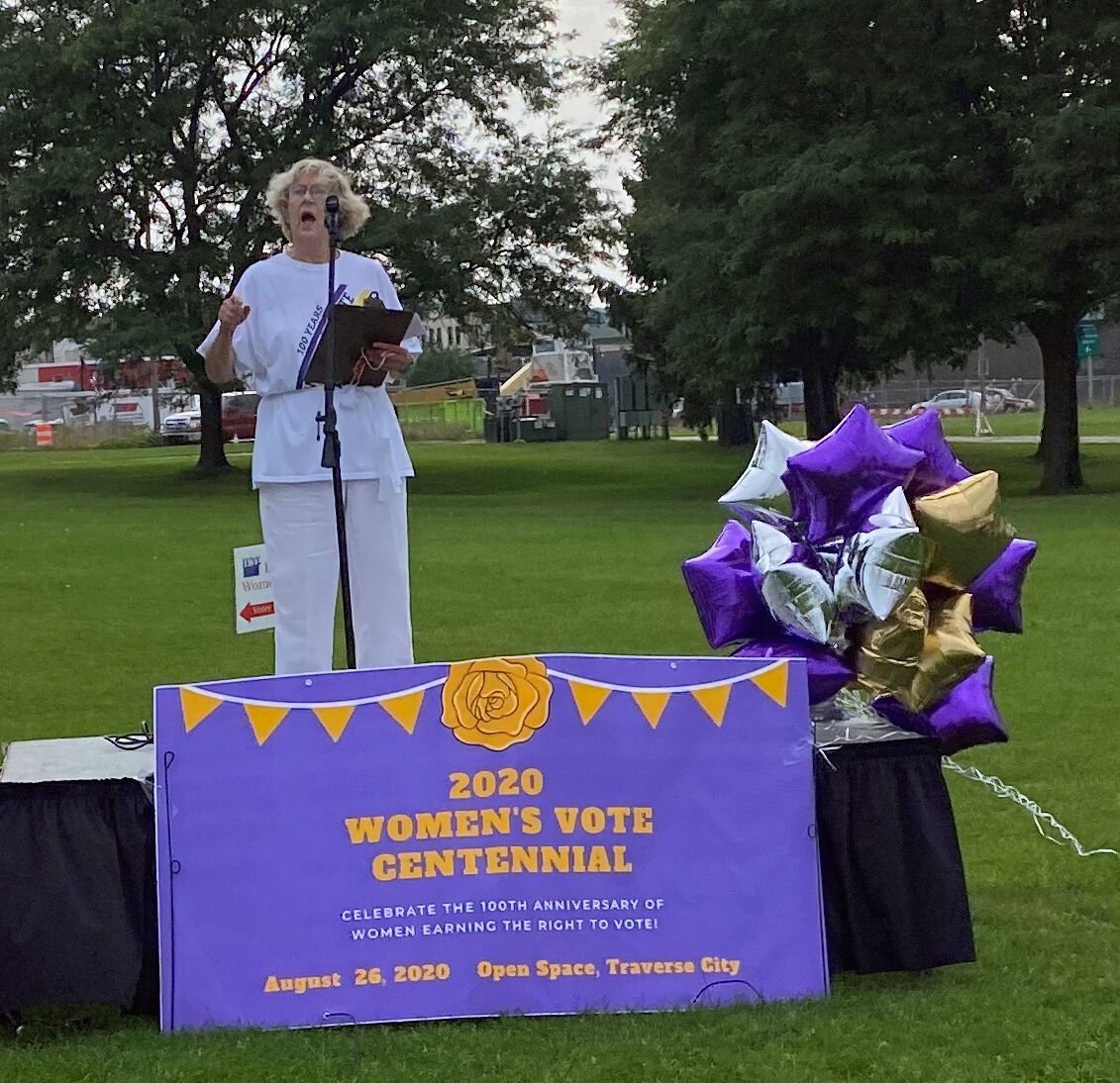 Mary Grover speaks at the Aug. 26 Open Space celebration of the passage of the 19th Amendment, which in 1920 guaranteed American women the right to vote.

Friends and fellow League members Jane Watts and Ingrid Brophy, at the time co-chairs of the 2013 LWV-GTA wreath sale.

League members gather at the Open Space for the Aug. 26 celebration of the passage of the 19th Amendment.

Mary Grover speaks at the Aug. 26 Open Space celebration of the passage of the 19th Amendment, which in 1920 guaranteed American women the right to vote.

Editor’s Note: This is the second of a two-part look at the League of Women Voters as the group readies for the 2020 election, and the national organization celebrates its centennial birthday.

TRAVERSE CITY — In an unprecedented election season one organization is holding to precedent — the League of Women Voters of the Grand Traverse Area is offering the same services it has provided for 60 years.

Those include candidate forums and essential voter information, and also reasons to celebrate.

A look at these offerings, and the memories of long-time LWV-GTA members, reveals the League’s impact on northern Michigan.

What is the League doing now, what has it done in the past, and what immediate challenges does it face?

First, a celebration during a pandemic? Yes, properly masked, but still celebratory. Four area groups, including the League, invited citizens to gather at the Open Space on Aug. 26 to commemorate the centennial of the passage of the 19th Amendment guaranteeing American women the right to vote.

League members turned out in force.

The LWV was rising to the challenge of COVID–19, taking all of its candidate forums online. Also virtual is Vote411 (www.VOTE411.org), a nonpartisan voters’ guide for information about federal, state and local elections.

Coming virtual forums will present candidates for the Grand Traverse County Commission (Oct. 5), Traverse City Area Public School Board (Oct. 8), and Northwestern Michigan College’s Board of Trustees (Oct. 9). Sign in information can be found on the LWV-GTA’s Facebook page.

Such forums can be memorable. Long-term LWV members feel that of all the candidate forums held by the League, perhaps the most memorable was the fall, 1990 Governor’s debate between incumbent Jim Blanchard and his challenger, John Engler.

At the time, Suzanne Connor (then Antosh) was the League’s voter service chairwoman, and hence the lead negotiator.

She helped set detailed parameters for the candidates, each of whom was represented by a lawyer. Sometimes vexing negotiations addressed in-house details, such as the height of the podium and use of props.

Wider ranging ones included the timing of the broadcast.

The timing was complicated, with the debate scheduled to broadcast immediately after a much-anticipated college football game. If that game ran into overtime (which, by the way, it did) the debate would be pushed into the network’s prime time, which the network wanted to avoid.

After much negotiation on this issue, all were satisfied.

“And the overtime actually worked well, because that nail-biter of a game proved to be a great lead-in to the debate, which garnered a very high viewership,” said Connor.

While never endorsing candidates or parties, the League will advocate for issues.

But only after each issue has been extensively studied and specific positions, based on member consensus, have been reached.

Extensive research certainly went into the League’s early 1990s decision to advocate for a new Traverse City library. The process began with the creation of a Library Action Committee. Past League president Barbara Berry recalls intense, monthly study sessions held over many cups of coffee.

Those sessions led the League to spearhead a successful 1996 millage dedicated to building a new central Library building. The success of that effort can be seen in TADL’s Woodmere building, sitting alongside the sparkling waters of Boardman Lake.

The LWV-GTA’s most recent educational programs were held in early 2020, before the pandemic. They focused on the census, homelessness, and state proposals 1 and 2.

Programs on PFA’s and gerrymandering are planned for early 2021.

Stances from the national league can also have local impacts. In 2018, most Republican candidates didn’t show for the candidate forum for Grand Traverse County commissioners hosted by the LWV-GTA after the League of Women Voters’ CEO Virginia Kase was arrested while protesting Brett Kavanaugh’s confirmation to the Supreme Court.

Organization, and dedication to research and planning what drew immediate past president Jan Warren to join in 1987.

“It wasn’t just the League’s actions that impressed me, but that those actions were always based on extensive research. The League encourages not just active participation by the electorate, but informed participation,” Warren said.

“One of the main reasons I joined the League was my respect for the many great role models who encouraged me to do so, including Helen Milliken, Sara Hardy, Carol Hale, Luanne Taylor, Betty Parker and Peg Kaufmann,” said Warren.

Today, Warren, Connor, and others are eager to mentor a new generation of League leaders. But therein lies one of the LWV’s current challenges: Its membership is aging, with several of the most active members being in their 80s.

Long-time member Jane Watts joined the League in 1967. LWV-GTA members are drawn together because they hold the common belief that educated citizen action lies at the heart of a successful democracy. They also believe that there is strength in numbers.

“I once attended the LWV National Convention in San Francisco. At some point it just hit me how people of like mind, gathering and working together, could create so much knowledge and power. It is invigorating for us all to know that we are not alone in our efforts,” she said.