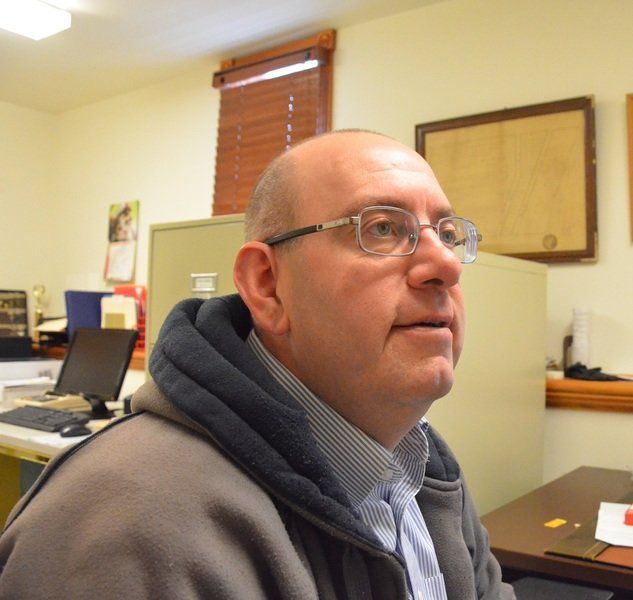 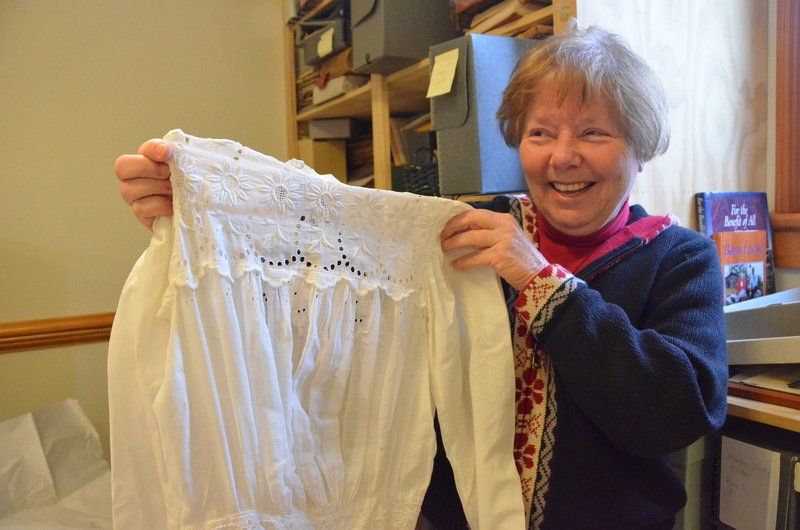 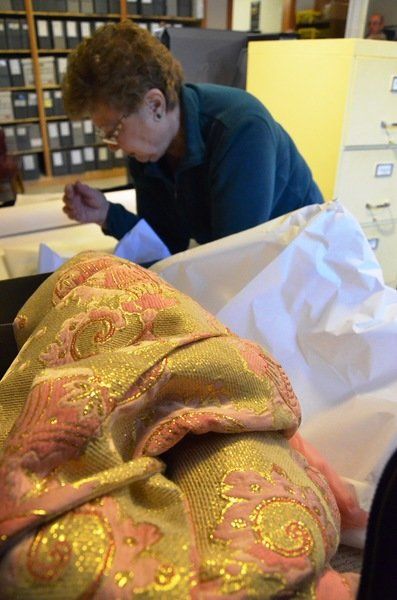 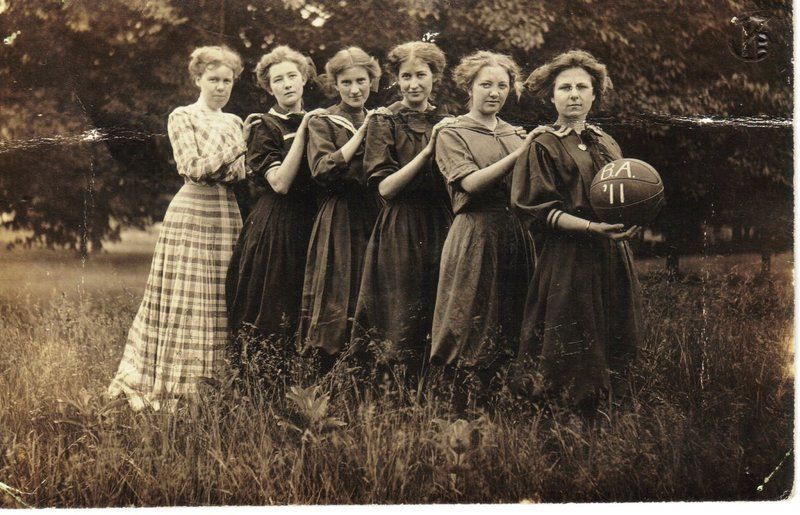 Special to the Record-Eagle/Benzie Area Historical MuseumThe 1911 Benzonia Academy girls basketball team. The academy, and the colleges that proceeded it, was built on the idea of an academic education for all, regardless of sex or race. 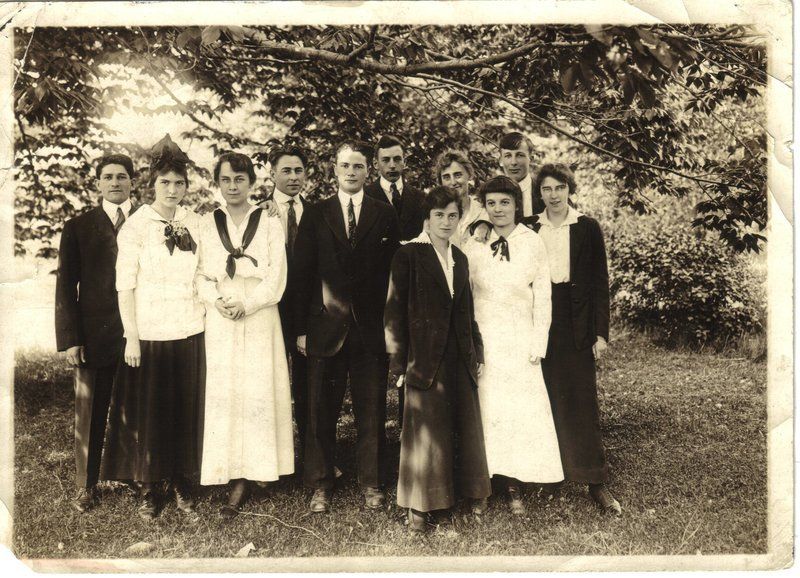 Special to the Record-Eagle/Benzie Area Historical MuseumPulitzer Prize-winning Civil War historian Bruce Catton graduated from Benzonia Academy in 1916 (second from the right); his father was the headmaster. He compared both the age and surroundings to "waiting for the morning train" in his childhood biography of the same name.

Special to the Record-Eagle/Benzie Area Historical MuseumThe 1911 Benzonia Academy girls basketball team. The academy, and the colleges that proceeded it, was built on the idea of an academic education for all, regardless of sex or race.

Special to the Record-Eagle/Benzie Area Historical MuseumPulitzer Prize-winning Civil War historian Bruce Catton graduated from Benzonia Academy in 1916 (second from the right); his father was the headmaster. He compared both the age and surroundings to "waiting for the morning train" in his childhood biography of the same name.

Williams, 92, today is a student of Benzonia Academy. She clicks her seat belt and drives from her Frankfort retirement home to Benzonia for monthly lectures on topics ranging from architecture to Armenian genocide.

“I think it’s important to hear what someone else thinks from time to time,” Williams said. “You can hear new ideas, learn how other people live and hopefully learn from their mistakes.”

It’s different now from when she, a Chicago kid, first started coming to Congregational Summer Assembly in 1933 — transportation then meant lake ferries, trains and sandy feet — but the area’s academic roots and ongoing commitment to history jive with her own philosophy. She’ll be a student here as long as transportation gets her to school, she said.

“I guess I always want to keep learning,” Williams said. “I want to know what’s going on and what happened before me.”

She’s not the first whose intellectual path led to the tiny Michigan northwoods hamlet of Benzonia. The land itself was cleared in education’s name  — a tenet of the Congregationalist settlers who founded Benzonia in 1858 to build a small, Christian college that included students regardless of sex or race.

“It was pretty radical idea at the time,” said Louis Yock, director of the Benzie Area Historical Museum.

Abolitionists and Oberlin College grads chartered the first school in 1863 as Grand Traverse Academy, which later morphed into Benzonia College and finally into prep school Benzonia Academy which shuttered in 1918.

“Unfortunately the population could not support a college, plus there the economic boom and bust of the area. Railroads were late coming here and it was hard to attract and retain professionals and students,” Yock said.

But the idea of a small academic enclave is alive and well in the reanimated Benzonia Academy, a year-round monthly lecture series hosted by the Benzie Area Historical Museum. Subject matter cuts a wide swath, but the focus is always academic — not performance-based or deliberately provocative, Yock said. It’s a long drive to a college in any direction, so they make their own learning every second Thursday.

“It’s our outlet for learning, education and knowledge,” Yock said.

Speakers are experts in their field; past guest’s included Noble-prize-winning economist Douglass North. Yock, who holds a doctorate in church history, gave one on “Rome’s Sacred Spaces.”

Local history topics always pack them in; those often meet at the larger Mills Community House — appropriately, the last standing building of the Benzonia Academy.

“There’s knowledge for everyone,” said Andy Bolander, who recently went to a lecture on immigration. “I was surprised.”

Bolander, 33, moved to the area six months ago. He came for the hiking but found himself unexpectedly “hooked on local history,” he said.

Yock and Bolander recently did an overland stomp seeking the remains of the Desmond Chemical Company Plant at Carter Siding, which turned cordwood to charcoal a century ago. They found it in “a double-rainbow moment,” Bolander said.

The lecture series and appreciation of local lore is a real community gift for a “nerd,” like him, he said.

“Anything that gathers people together to broaden the imagination and curiosity is a good thing,” Bolander said.

He joins a robust cadre of museum volunteers like Jane Purkis, who spent this week cataloging donated vintage clothing in the museum’s computer system. She and her friends folded thin dresses carefully between sheets of acid-free paper. Purkis also volunteers with the Benzie Area Women’s History Project and the museum’s new genealogy section.

She rustled out a delicate white dress, worn by an eighth grade graduate of Benzonia Academy in 1909.

“For the size of our town, we have a lot of history,” Purkis said.

<\z186666660308838>”We were a college town without a college. This restores us to our place as a center of learning,” Yock said. “People who are interested in learning appreciate that.”