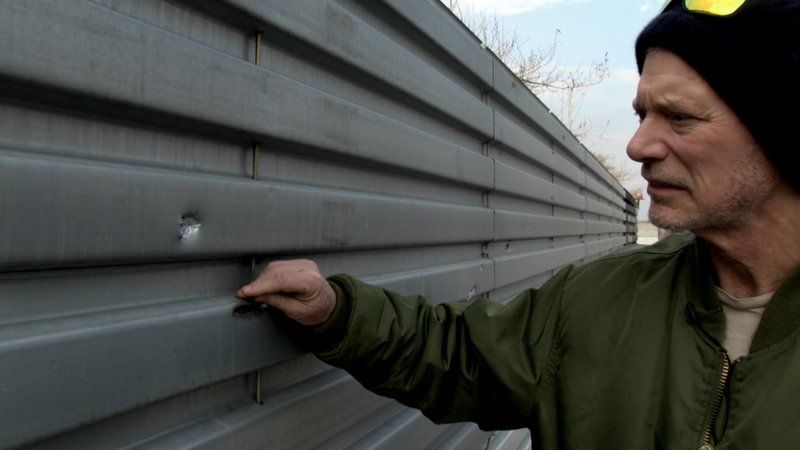 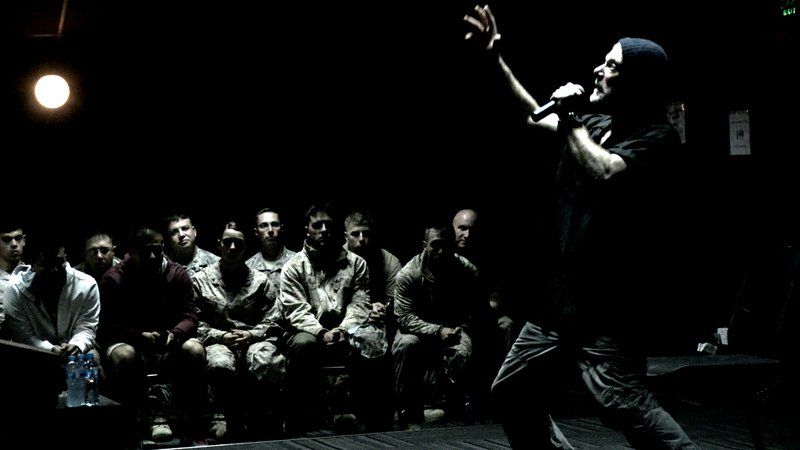 Actor and playwright Stephen Lang portrays a Congressional Medal of Honor recipient in his play, "Beyond Glory," based on a book by an Antrim County native. A new documentary about the play, produced by Leland residents, will get its Michigan premiere Nov. 6 and 7 at the Old Art Building in Leland. 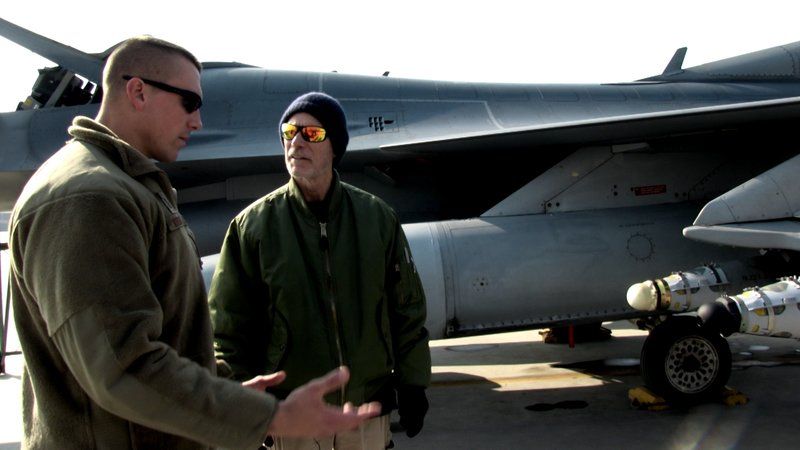 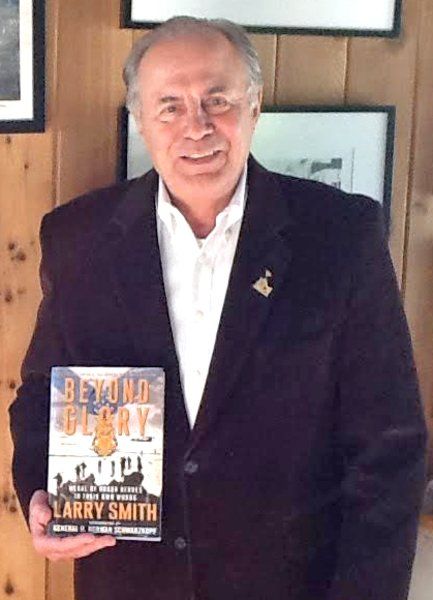 Author Larry Smith holds a copy of his book, "Beyond Glory."

Actor and playwright Stephen Lang portrays a Congressional Medal of Honor recipient in his play, "Beyond Glory," based on a book by an Antrim County native. A new documentary about the play, produced by Leland residents, will get its Michigan premiere Nov. 6 and 7 at the Old Art Building in Leland.

Author Larry Smith holds a copy of his book, "Beyond Glory."

TRAVERSE CITY — It takes guts to earn the Congressional Medal of Honor for extraordinary acts of valor on the battlefield.

It took "Beyond Glory," to bring those acts to paper, stage and, now, screen.

The new documentary film tells the story of actor and playwright Stephen Lang's year-long journey with his one-man play of the same name. And the film, like the book the play is based on — also of the same name — has northern Michigan's stamp on it.

Lang (“Avatar,” “Tombstone”) portrays several Medal of Honor recipients in the play, based on their oral histories from the 2003 book "Beyond Glory" by Antrim County native Larry Smith. The feature-length performance documentary, which follows Lang as he tours with the award-winning play from the Midwest to Afghanistan, was produced by Ross Satterwhite and 8180 Films' Rebecca Reynolds and Jim Carpenter, all of Leland. It was directed by Larry Brand, also of 8180 Films.

The documentary premiered Oct. 16 at the Chelsea Film Festival in New York and will get its Michigan premiere Nov. 6 and 7 at the Leelanau Community Cultural Center's Old Art Building in Leland. The film is set "proscenium," or as if it were taking place on stage.

“It’s a kind of synthesis between film and theater because it’s very rare that artists are satisfied with filming a production of a play, especially a play that’s done in proscenium," said Reynolds, who attended the New York premiere along with the others. "Because sound and lighting are for stage, not for film.”

Author Smith began interviewing two dozen Medal of Honor recipients early in 2000 while researching a story for Parade magazine. He never served in the military but felt an almost immediate connection to the men with whom he spoke — officers and enlistees of World War II, Korea and Vietnam — and wanted to set down their stories on paper while they were still alive to tell them.

The play focuses on eight of the men, including former U.S. Senator Daniel Inouye, who died in 2012, and Clarence Sasser, one of only two of the eight still alive. Sasser, a Vietnam War medic, spent hours crawling from one wounded comrade to another under heavy mortar and artillery fire until he himself was too badly wounded to continue.

“All these guys are different and at the same time they’re united in who they are as individuals and veterans,” said Smith, who worked with the New York Daily News and The New York Times before retiring in 2000 as managing editor of Parade. “They have great humility. They never set out to be a hero. You hear it often among veterans: 'I was only doing my job.' 'I was doing what I was supposed to do.' 'I was obeying orders.'”

Smith, now of Block Island off Rhode Island, still lived in New York when the book was published. A lawyer friend volunteered to organize a book signing in nearby Chappaqua and asked for a copy to read. Smith brought the book to him at a Sunday morning basketball game at the local YMCA.

“Stephen was sitting on a bench and asked to see it, then asked if he could have it,” said Smith, who got Lang his own copy. “He was extremely taken with it. He played Colonel Jessup in ‘A Few Good Men’ on Broadway, he was in ‘Gods and Generals’ and the movie ‘Gettysburg,’ so he had a sense of the sacrifice of the American fighting man. And once he read the stories in the book, they spoke to him with authority.”

At the time Lang was artistic director of The Actors Studio in New York. He arranged for several actors to do some readings from the book but "wasn’t crazy about the way the whole thing was sounding," Smith said. So Lang took chunks of several stories from the book, representing men of different backgrounds and military branches, and put them together in a play he could perform himself.

The show premiered in Washington not long after and opened off-Broadway in 2007. Reynolds said she and Carpenter, producers of "The Girl on the Train" and "Christine," both of which featured Lang, were unaware of the play and the book when he approached them in 2013.

“He told us he toured all over with the play. He only had one regret, which was that he had not filmed it,” Reynolds said. “Because he had worked with us before he said, ‘I thought it would make a good documentary.’”

Crew filmed Lang as he performed the play on a 2013 "Heartland" tour and a 2014 tour in Afghanistan to entertain troops. Then they shot the entire play with a live audience at New York's off-off-Broadway Flea Theater, using lighting and sound meant for film.

Finally they shot the play on a green screen in Los Angeles — sans audience — so they could drop in historic photos and computer-generated visual effects that show Lang portraying characters in various locations like a bombed-out village in Italy during World War II.

“That computer-generated imagery kicks it up a notch in terms of the visual image and uniqueness of the film,” Carpenter said.

"Beyond Glory" was in post-production for more than a year on both coasts. Actor and veterans advocate Gary Sinise recorded the narration in late September from Los Angeles, with Brand, Lang and a sound crew working in New York.

The film will screen in Leland at 6:30 p.m. on Nov. 6 and 1 p.m. on Nov. 7. Both events will include a Q&A after with Lang and Smith. Tickets are $15 for adults and $5 for students at mynorthtickets.com or oldartbuilding.com.

"We deliberately timed it for Veterans Day and we hope veterans will come. Because these are their stories," Reynolds said.

Lang and Smith also will talk with Leland School drama and creative writing students Nov. 6 and Smith will autograph books at 10 a.m. on Nov. 7 at the Leland Township Library.

“We feel very lucky, thrilled,” said Becky Ashley Ross, executive director of the Leelanau Community Cultural Center, which funneled funds for some of the film’s visual effects and got underwriting for the mens' visits. “It’s going to be a big deal.”

The producers will look for distribution rights for TV, digital, VOD and other distribution channels after the Michigan premiere, said Reynolds and Carpenter.

“This film has a wonderful general appeal as well as a specific appeal to a military and family audience,” Carpenter said. “It has all the potential in the world for big distribution.”