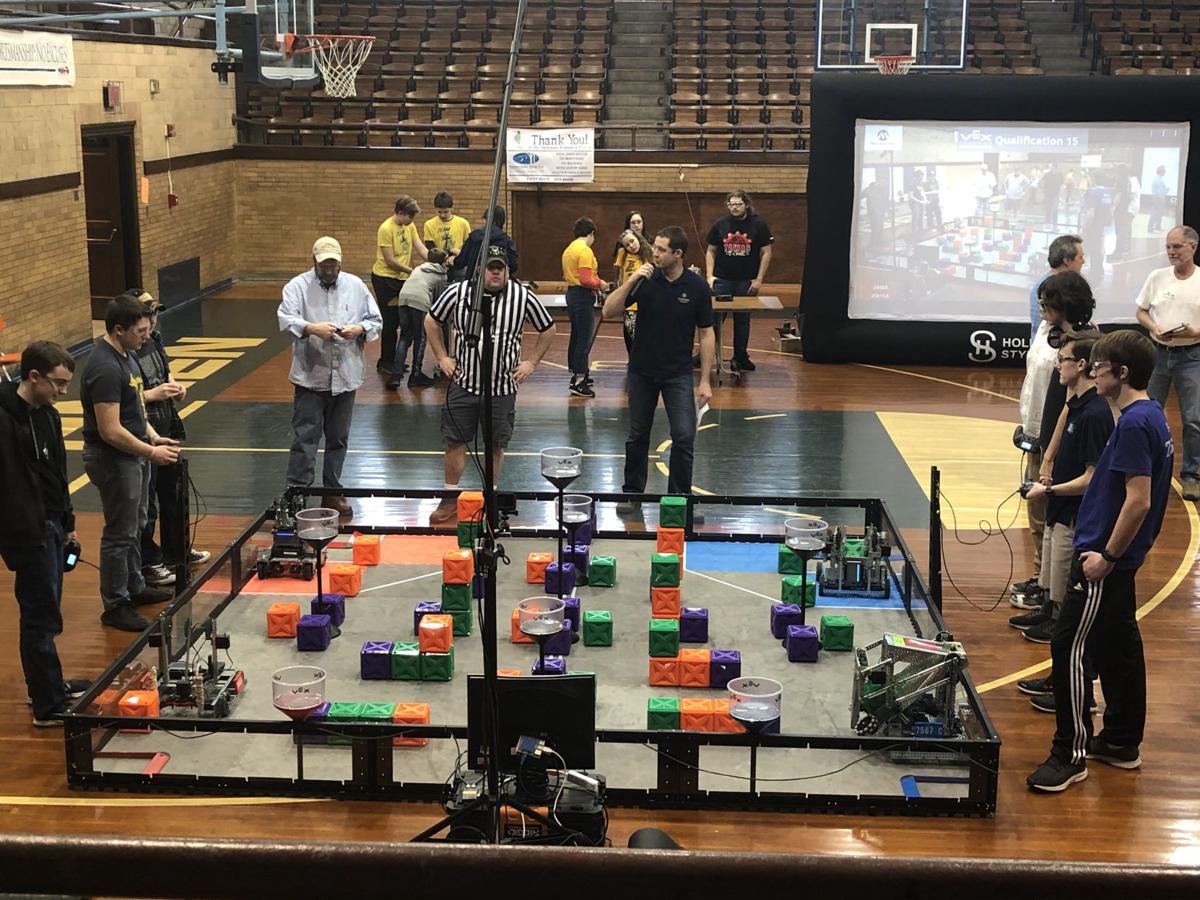 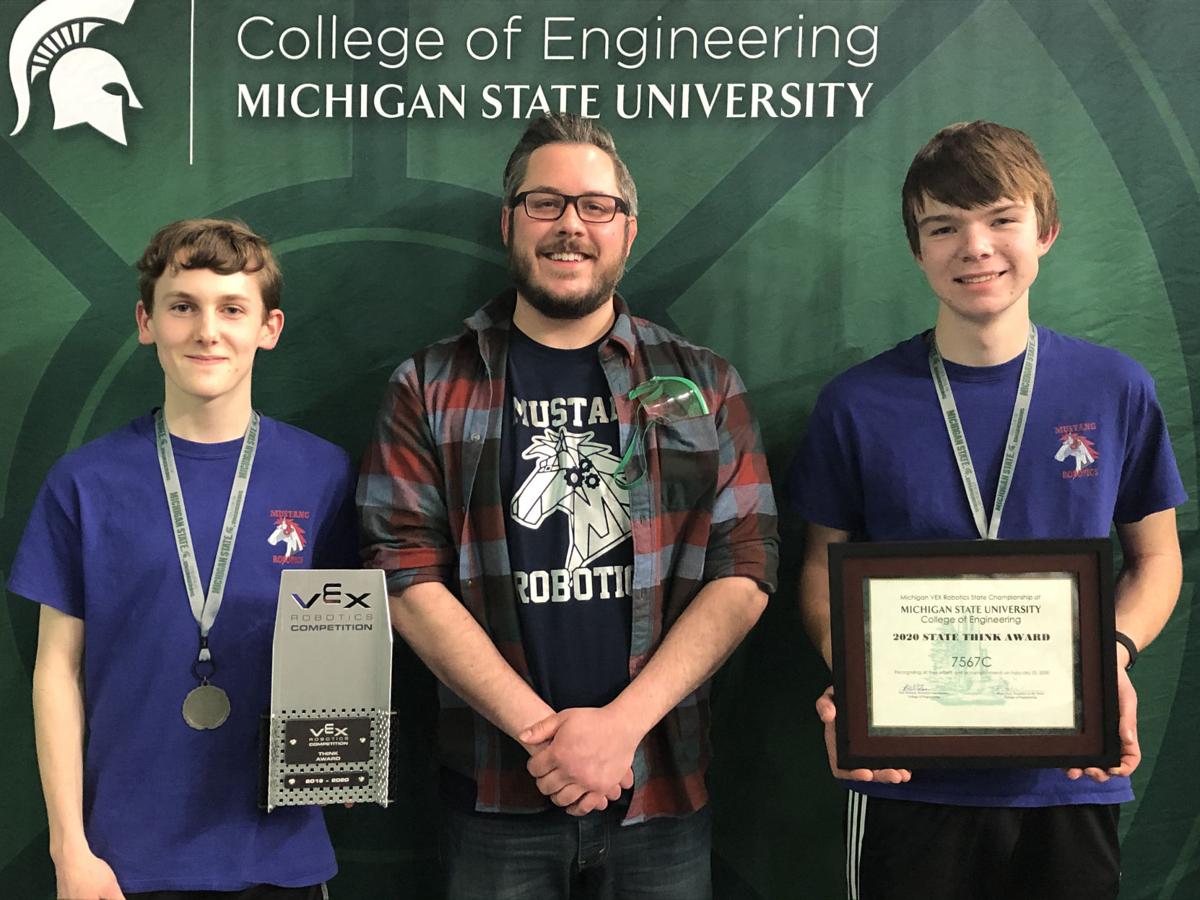 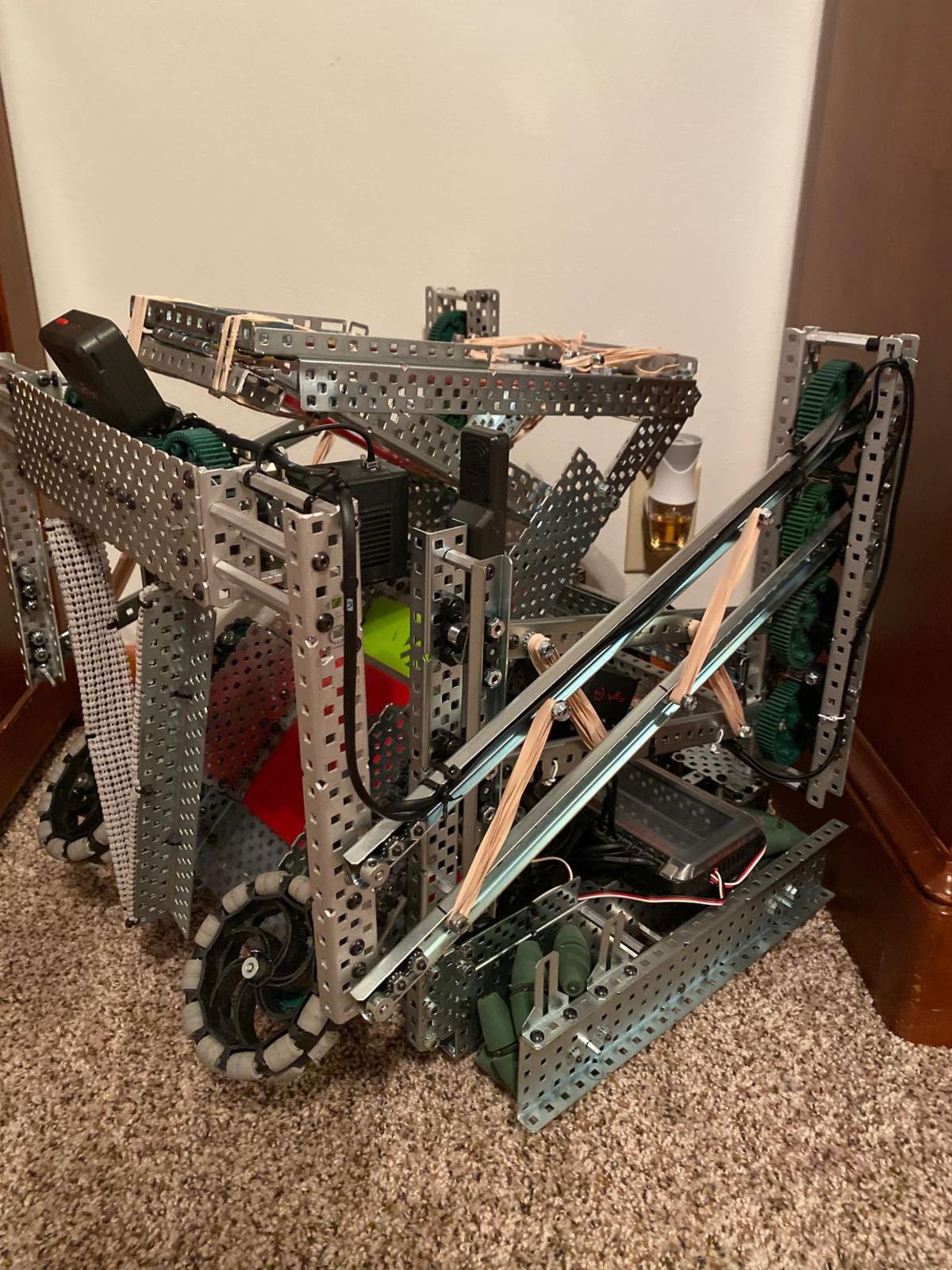 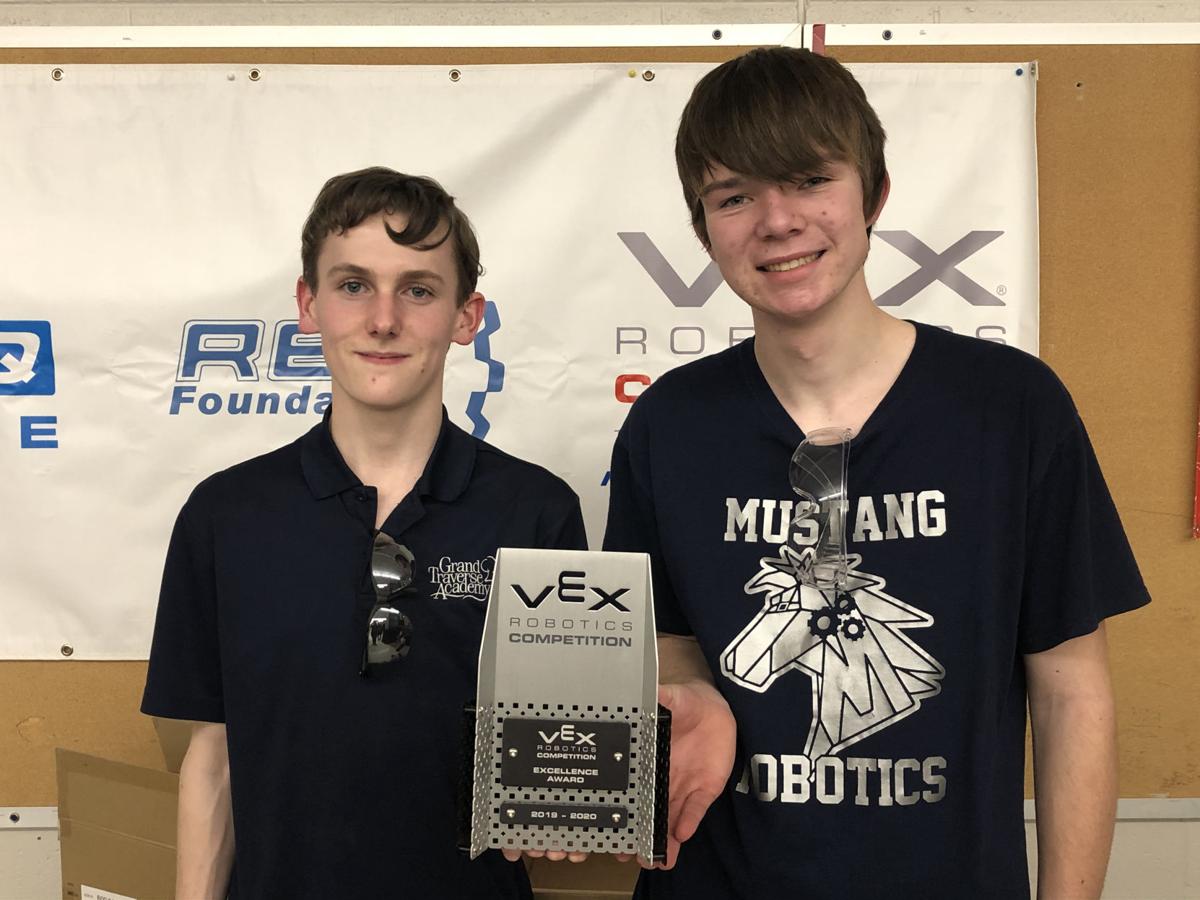 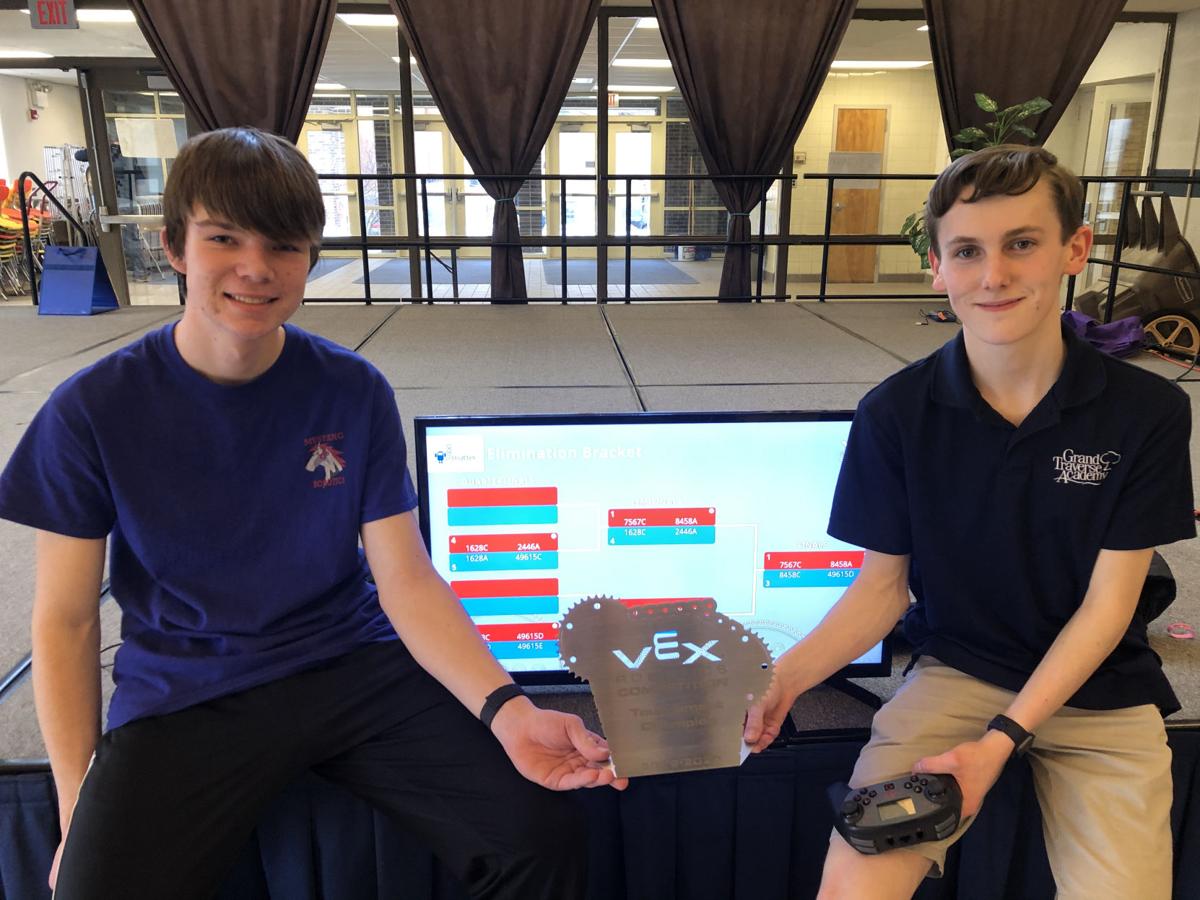 Seth and I holding our tournament champions trophy in Petoskey.

Seth and I holding our tournament champions trophy in Petoskey.

TRAVERSE CITY — If it’s a choice between sleep and robotics, high schoolers Bo Eyre and Seth Carpenter choose the latter.

Carpenter, 17, goes to bed at 3:30 a.m. after texting Eyre updates on construction of their robot. It’s around that time Eyre, 16, wakes up to work on coding and an engineering notebook until classes at Grand Traverse Academy begin.

The deprivation is only on the harder days though — when they have a competition coming up or are nearing a big milestone, Eyre said.

“We delete sleep to cram more time in for robotics,” Eyre said.

It’s worth it though, because on Feb. 23, the pair qualified for the Robotics Education & Competition Foundation’s VEX Robotics World Championship, which brings together top middle school, high school and college robotics teams from around the world. The event is scheduled for April 22-28.

Eyre and Carpenter make up the team Pi IS 3. They were one of 13 teams in the state — there are about 250 teams total — to qualify for the world competition, and the only one from northern Michigan, said Ben Jackson, a GTA science teacher who coaches the duo.

Each year, VEX releases a game and teams build a robot to accomplish the assigned tasks, Carpenter said. This year’s is Tower Takeover, which involves stacking cubes and placing them in towers, he said.

Each match teams play runs two minutes, with a 15-second autonomous period at the start for the robot to perform pre-programed tasks, Eyre said. The remaining time is a driver-controlled period, he said, adding that Carpenter is the team’s designated driver.

“Matches are always scored at the end, so it’s not about what you do during the match. It’s about what happens when all the robots come to rest,” Eyre said.

But there’s more to it than just the two-minute match, Jackson said.

“Part of the competition is the actual matches, but there’s a whole other half — if not three-quarters — of awards, of qualifying for worlds, qualifying for states that is based on the engineering process,” he said.

That means the quality and quantity of the material in the engineering notebook Eyre maintains, an interview with the judges and the robot’s coding, Jackson noted. They’re facets of the competition that Eyre and Carpenter are “just crushing it,” he said.

Getting to Worlds is similar to a high school athletic competition, Jackson said. Winning would earn Eyre and Carpenter a lot of recognition, much like a football team would, he said.

“It’s huge international recognition, scholarships will get thrown at you if you win, I’m sure, college recruiting,” Jackson said. “It would be a massive thing for some of the top universities to say, ‘VEX World Champion.’”

VEX Robotics is a “leading provider” of educational and competitive robotics products to schools from the elementary level to the university level and teams around the world, according to the REC Foundation website.

The REC Foundation is a 501©(3) nonprofit educational organization aiming to increase student interest in science, technology, engineering and mathematics, its website states.

Teams from mainland China, South Korea, Italy and Iran won’t be allowed to attend the 2020 World Championship, per recommendations of the U.S. Centers for Disease Control and Prevention and the World Health Organization, a March 11 press release from the REC Foundation states.

Additional restrictions might apply as the situation evolves, but the event was not canceled as of Thursday afternoon.

On Wednesday, the WHO, the world’s leading health authority, declared the global coronavirus crisis a pandemic. Large gatherings generally are being discouraged.

More than 30,000 people from 40 nations attended the 2019 World Championship, according to the REC Foundation.

“(Attending) is a concern we’re just weighing out and letting the officials make that call,” said Lisa Carpenter, Seth’s mom. “With the development you just kind of have to see how everything plays out and what the officials say.”

Eyre said his parents told him, because of the hard work he and Carpenter put in, they were planning on attending the competition so long as it wasn’t restricted.

The two teens won the “Think Award” at the MSU Michigan VRC High School State Championship — a competition they qualified for five times over.

The “Think Award,” in turn qualified them for the VEX Robotics World Championship.

“I think, to sum it all up, two self-taught coders and self-taught engineers did so well at it — without my help even — that they stood out amongst all the teams in the state based on their engineering processes,” Jackson said.