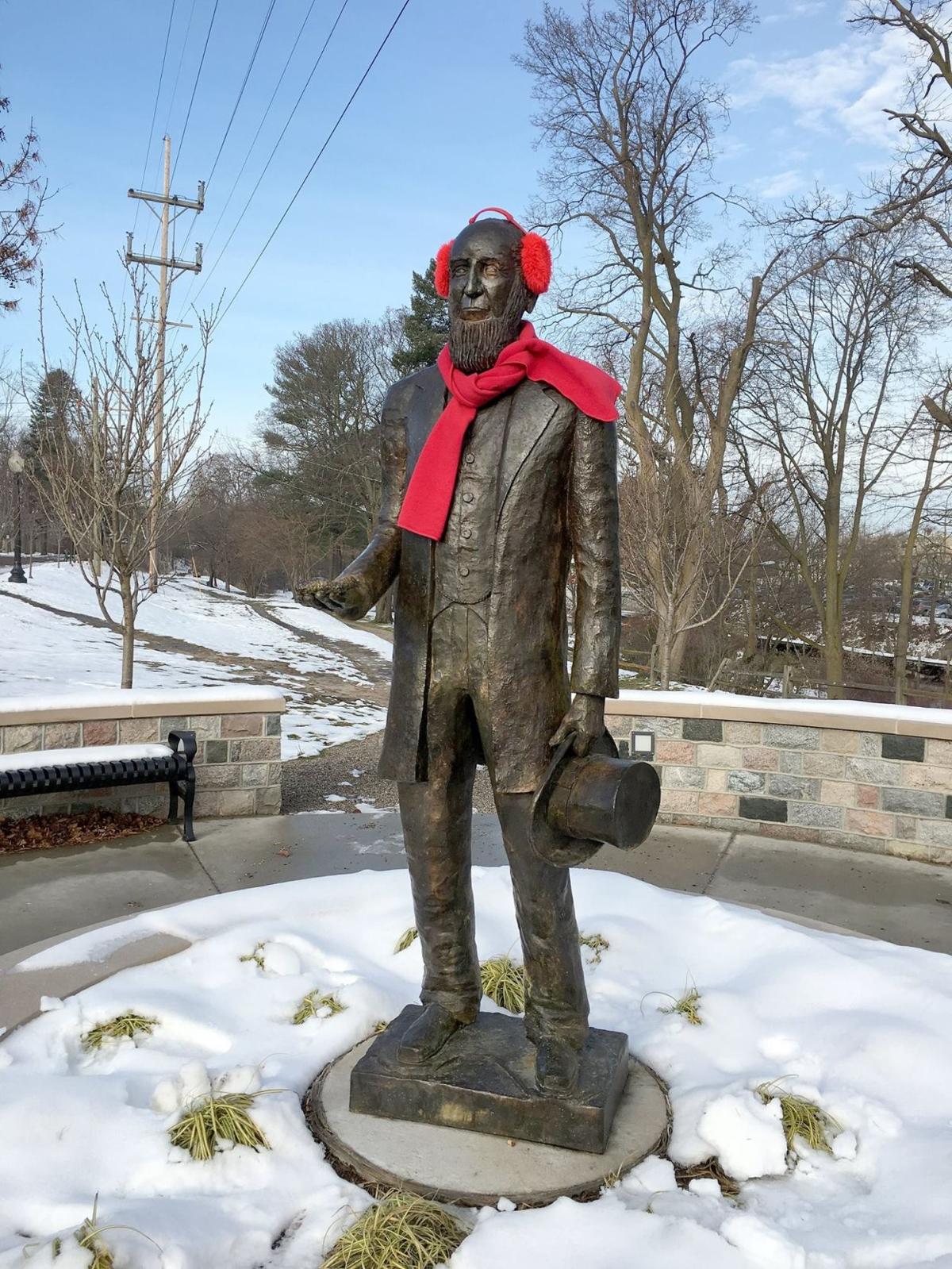 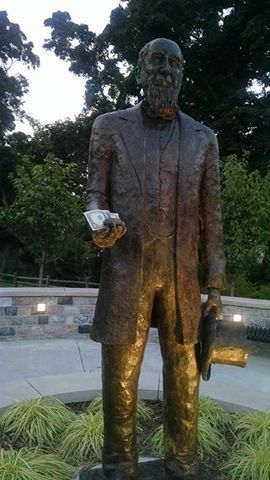 Special to the Record Eagle 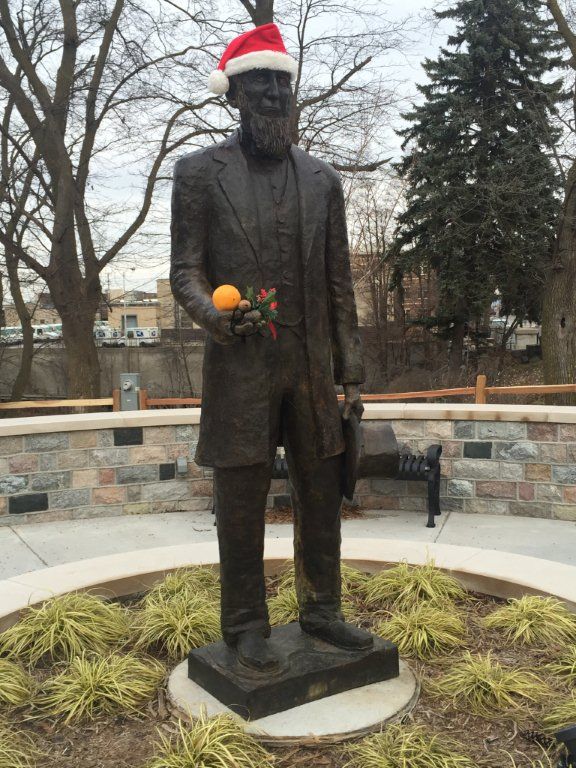 Perry Hannah wears a Santa hat while holding an orange and a sprig of greens at Christmas. 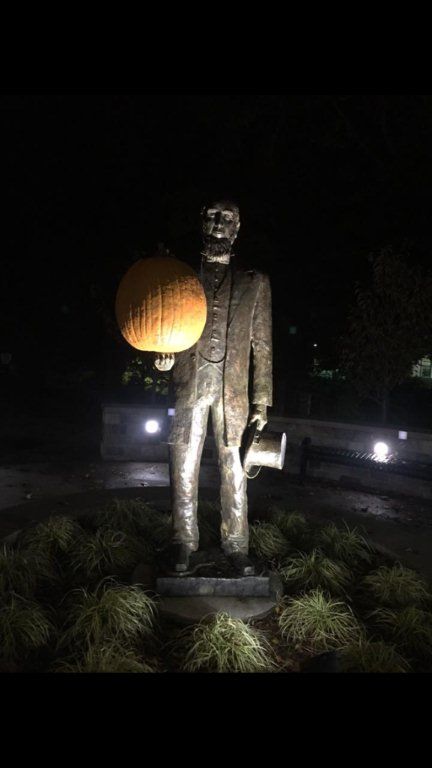 Special to the Record Eagle

Perry Hannah wears a Santa hat while holding an orange and a sprig of greens at Christmas.

TRAVERSE CITY — Perry Hannah won’t top any best-dressed lists, but it’s not for lack of a natty wardrobe.

Since its unveiling last summer the statue of Traverse City’s founding father has been spotted wearing everything from sports caps and a Santa hat to scarves and earmuffs, all placed on his bronze figure under a cloak of secrecy.

And the accessorizing doesn’t stop there. The likeness of the late lumber baron often can be seen holding more than just a bronze pinecone in his outstretched right hand.

The playful new tradition and its air of mystery have captured the imagination of everyone from neighbors to commuters to tourists, many of whom do double-takes as they pass or post photos to Hannah’s Facebook page, www.facebook.com/perryhannahtraversecity.

“We are getting a big kick out of it,” said Vicki Anderson, who has a birds-eye view of the statue from her second-floor condo across the street. “People come down and look at him and take photographs of him. It’s just a neat thing. We never thought it would attract so much attention.”

The 6-foot-tall statue sculpted and cast by area artists Verna Bartnick and T.J. Carroll stands at the intersection of Union and Sixth Streets. It’s surrounded by a raised planter in the center of a small concrete and brick plaza with a seat wall at the entrance to Hannah Park.

“It’s his park, it’s a way to welcome people to the park and the best way to educate people about who he was and his influence on the city,” said Peg Jonkhoff, who owns Hannah’s former Victorian retirement mansion on Sixth Street — now her family’s funeral business — and helped fund the statue through proceeds from her book, “Perry Hannah’s Gifts - Then and Now,” with co-author Fred Hoisington.

Hannah, who was born in 1824 and died in 1904, first came to what is now Traverse City in 1851 as president of Hannah, Lay and Company in Chicago. He served as the city’s first mayor and spent a term in the state legislature.

Dressing up his likeness began shortly after the statue was erected in August 2015.

“One time I saw this guy early in the morning — it was light because it was summer — standing up and looking at him,” Anderson said. “He looked behind him, he looked around him, he looked up and down the street. Then he jumped up on the statue and put a hat on him. I went over and it said, (Traverse City baseball team) ‘Beach Bums’ on the hat.”

The fun caught on and soon Hannah was sporting team logo wear from Michigan State University and the University of Michigan and holding everything from a pumpkin to a dollar bill.

“We tried to guess what fun story might be behind it, and joked that maybe putting money in Perry’s hand was going to be a new TC tradition,” said Joan Hughes, who spotted the currency as she and a friend walked downtown from Hughes’ home in the Central Neighborhood.

Even Anderson and her husband Bill “Bil” Anderson got in on the act.

“We put a scarf on him before Christmas,” admitted Vicki Anderson. “It was just the right color of red, the perfect color for Christmas. After we put the scarf on, (matching) earmuffs showed up the next day, almost.”

The scarf stayed put for a few weeks, then disappeared. The couple replaced it with another, now also gone. But Hannah was left holding a sprig of greens topped by a decorative cardinal, and soon after that, a Christmas orange.

The statue and its wardrobe is a favorite topic of anticipation and conversation at Madeline Robinson’s office, Kelly Oil & Gas.

“All of us enjoy it immensely, looking down over it. It’s just such an addition to this neighborhood,” said Robinson, Anderson’s neighbor. “I was just talking with Peg last night and we were howling over his outfits. I told Peg if he can wear bunny ears at Easter, someone might try it.”

The accessories disappear as mysteriously as they appear, said Jonkhoff, who monitors the statue daily and posed next to it with her family for a 2015 Christmas card.

Trying to guess ‘who done it’ is almost as much fun as seeing what Hannah is wearing, said City Planning Director Russ Soyring, whose bike routes often take him past the statue.

“We thought whoever put the scarf around his neck must be a classy dresser because they did such a nice job, the way it was folded around his neck,” said Soyring, who briefly toyed with the idea of putting a medal around the statue’s neck. “It was done with such style and class.”

Jonkhoff believes the lighthearted tradition is a sign that people care about, even cherish, the city statue, though she knows of others who view it as disrespectful.

But Soyring said as long as the activity doesn’t turn inappropriate or malicious, there’s no harm and therefore no foul.

“I think it brings some life back to Perry Hannah and I think people actually look to see what’s up with Perry Hannah today. It’s a lot of fun,” he said. “If it’s tasteful and it’s adding some joy and smiles to the city, I don’t think they’re going to be concerned. Life’s too short to be serious about everything.”