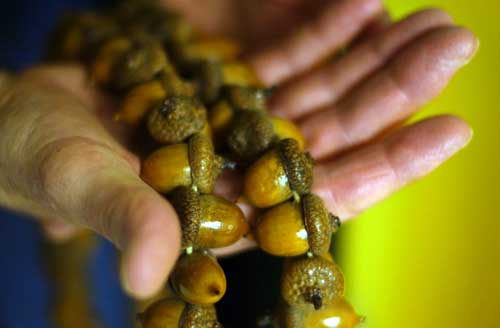 Harry Dorman holds a necklace made of acorns signifying the rebirth of spring. 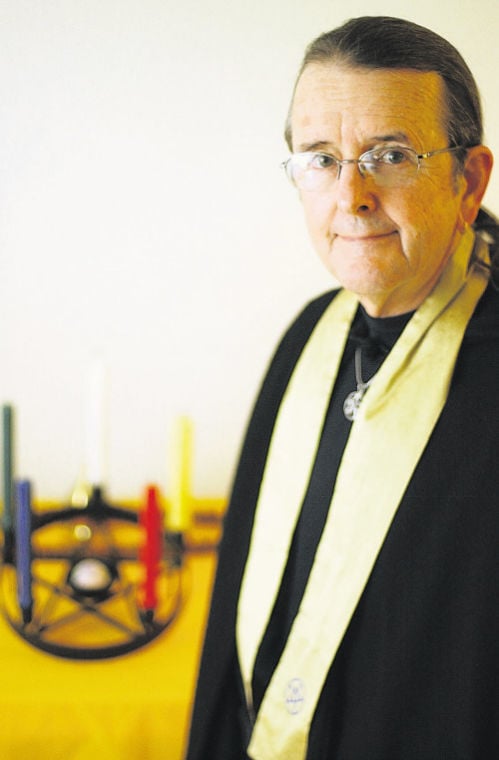 Harry Dorman has been a Wiccan priest for three years. He and area Wiccan followers will be celebrating the upcoming Spring equinox holiday called Ostara. 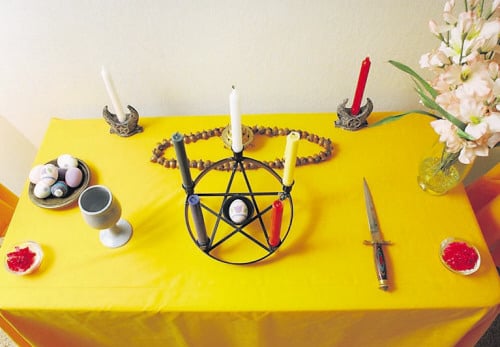 A pentagram accents a Wiccan ceremonial alter at the home.

Harry Dorman holds a necklace made of acorns signifying the rebirth of spring.

Harry Dorman has been a Wiccan priest for three years. He and area Wiccan followers will be celebrating the upcoming Spring equinox holiday called Ostara.

A pentagram accents a Wiccan ceremonial alter at the home.

TRAVERSE CITY -- While Christians prepare to celebrate the good news of the resurrection of Jesus Christ this Easter, a lesser known religion is preparing for a major celebration of its own.

As the Earth's axis tilts the northern hemisphere back toward the sun, followers of Wicca, a nature-based religion, will celebrate Ostara, a holy day of seasonal rebirth and renewal, during the vernal equinox on Thursday. In Traverse City, the Rev. Harry C. Dorman is eagerly awaiting the seasonal change.

Dorman is an ordained Wiccan priest and minister affiliated with Circle Sanctuary of Barneveld, Wis. His ministry encompasses spiritual and life counseling, healing work and officiating and supporting various Wiccan spiritual and life rites-of-passage. He also advocates for the freedom of all religions as guaranteed under the Constitution and the need for building tolerance and respect between faiths.

"Rebirth is a part of most religions. Regardless of the specific faith, life is cyclical, seasons are cyclical and really the entire universe and its mechanics are cyclical in some way," Dorman said. "Wicca and nature spirit religions focus on that in a more narrow context than some other religions."

Dorman said that typically, Wiccans observe Ostara with worship conducted in a circle outdoors, weather permitting, but indoors works, too. A flat surface is set within the circle. For Ostara it is placed in the east section of the circle because the spring equinox on the wheel of the year is in the same eastern direction as on the Compass Rose.

An altar is decorated with objects such as flowers, acorns, herbs, eggs and other items preparing to come forth in the spring growth cycle.

He feels the pentagram requires clarification because it is often connotes devil worship or other negative images people or institutions inaccurately associate with Wicca.

"Wiccans don't have a belief in the devil or Satan or any of the anti-Christ images people associate with pagan religions. Any suggestion of that is misinformation, and unfortunately has been fanned by the media and movie makers," he said.

It's myths like this that lead Dorman to believe communication is key for developing tolerance and understanding of the Wiccan faith.

"Wiccans worship in circles because of the cyclical deity being the nature of the seasons. It has no beginning and no end, and it also represents everyone equal within the worship area. There is no elevated person who controls the worship environment," Dorman said.

In fact, Dorman feels that misconceptions about pagan religions in general need some myth busting.

Although frequently maligned, the word pagan comes from the Latin "paganus," referring to people who live in the country.

"When early organized religions began to make their presence felt, the word was used as a joke like 'country bumpkin,'" Dorman said. "As mainstream religions began to take hold, the term pagan was used to describe all religions that weren't part of the prevailing one."

He said that since many of the pagan religions were driven underground, the practices were secretly passed on, adding to the mystique. Dorman said that the myth that "witchcraft" is somehow associated with the black arts is totally wrong; in fact, he said, witchcraft is the term for the prayer side Wicca.

Paganism is a general category, just as in Christianity there are a number of traditions.

Within Paganism there is Druidism, a form of worship more focused and organized than Wicca, and within Wicca there are several traditions people follow. Dorman said the religion holds a lot in common with Native American traditions and has similarities to Celtic and Egyptian, Greek, Scandinavian and other ancient faiths dating back thousands of years.

He estimates that in northern Michigan, several hundred pagans either worship solitarily or meet regularly in groups, especially during the holidays.

"Wiccans greatly value the opportunity to develop relations with other religions. We need that in our society," Dorman said. "I would love to see Traverse City have a religious diversity day, or an interfaith respect conference, where people of all faiths could come together and say, 'These are the things I've heard about you,' and 'This is what we're all about.'"

Since Wicca is not an assertive religion, members tend to avoid making public statements about their faith. Dorman admits that sometimes, it's misunderstanding that breeds confrontations.

"There are some Wiccans who are sensitive to mainstream religion's take on our faith -- that it's not the real McCoy, not acceptable," Dorman said.

But even though they're not vocal, Wiccans tend to be sensitive to hot button social topics and welcome those struggling with issues such as race, ethnic background and sexual orientation.

Although they don't actively recruit members, people seek them out through word of mouth, curiosity or interest. Dorman, who studied three years to become a Wiccan priest, said between 10 and 20 people attend his local Wiccan circle.

And membership is growing. He's always open to constructive discussion on the topic and said the majority of people he talks to tend to be, in their heart of hearts, pretty much middle-road, fair-thinking folks.

"In the end, it's all about being close to the divine," he said.

For questions on Wicca, e-mail Harry Dorman at hdorman4270@charter.net.