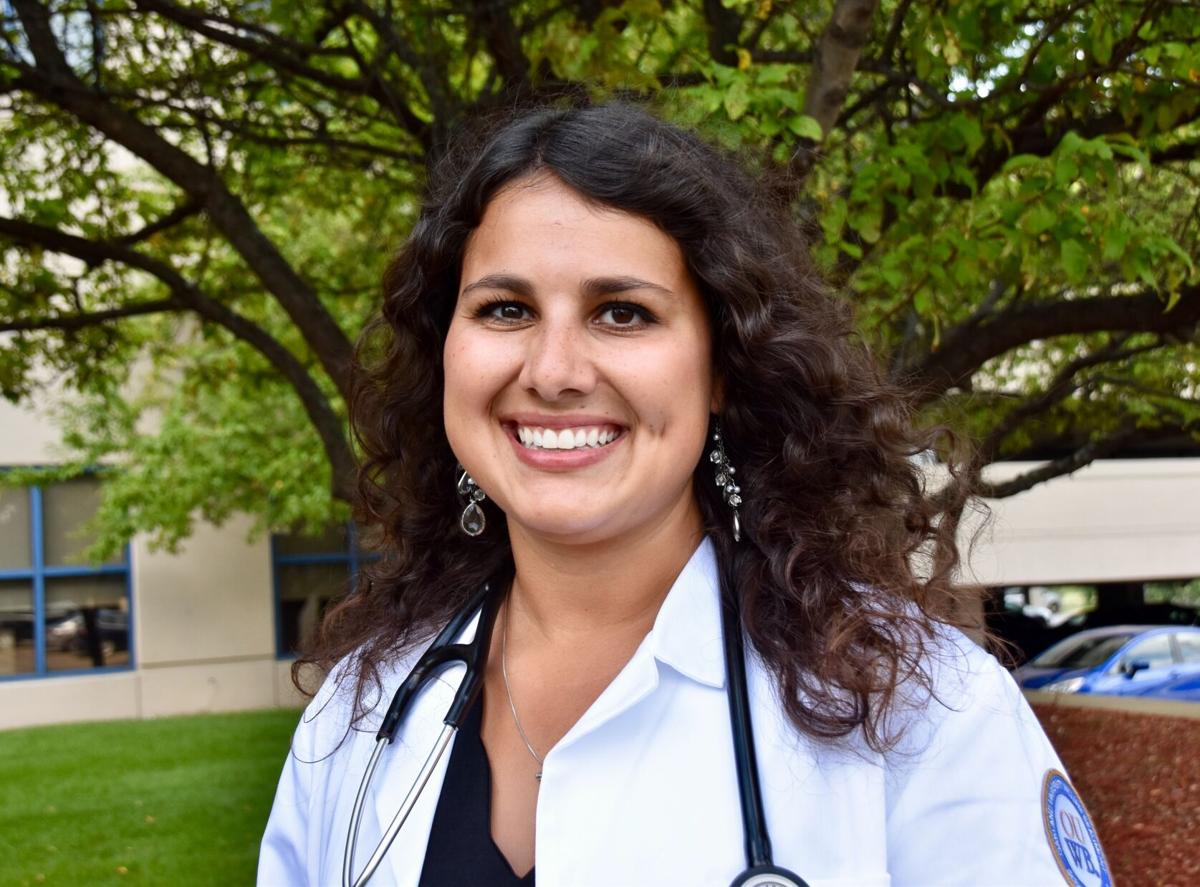 Meghan Brown in her white coat. 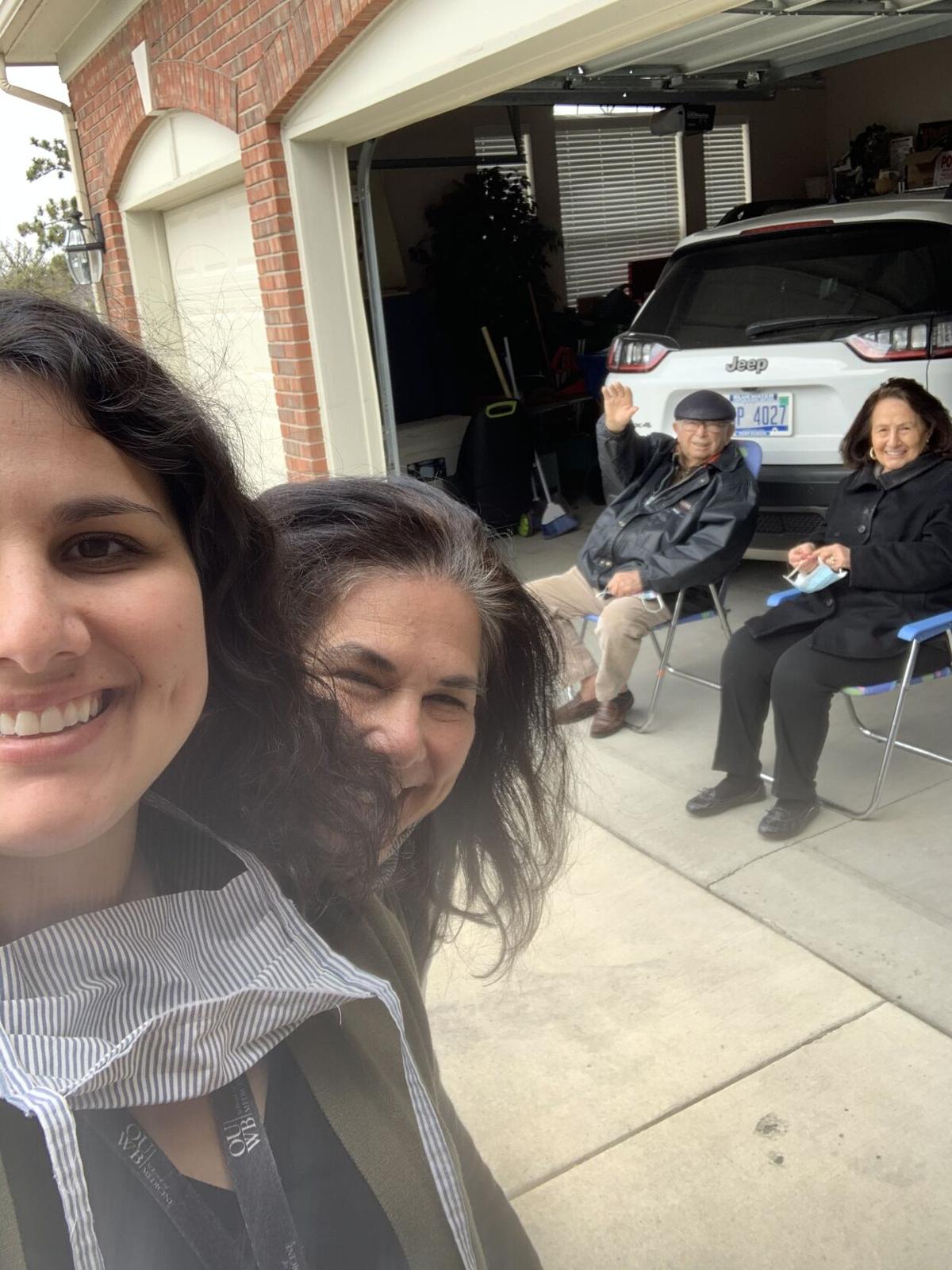 Meghan Brown, far left, with her mother and grandparents April 25, the day she saved a man’s life at a Rochester Kroger.

Meghan Brown in her white coat.

Meghan Brown, far left, with her mother and grandparents April 25, the day she saved a man’s life at a Rochester Kroger.

Moments later, he grabbed onto a pillar and collapsed to the ground.

Even with social-distancing lockdowns to limit the spread of COVID-19 and new infections peaking in suburban Detroit, Brown didn’t flinch. She raced to the man and called 911.

The coronavirus pandemic made masks and gloves the new normal for the time being, but to Brown they are a part of the job she seeks.

Brown, a 2013 graduate of Traverse City Central High School and the University of Michigan, is now a fourth-year medical student at Oakland University William Beaumont School of Medicine and has been trained on first-aid protocols for years.

So when the 911 operator asked Brown to start performing cardiopulmonary resuscitation, she said “OK,” and proceeded to try and save the life of a man she’d known for seconds.

“Everything was timed perfectly and lined up so that I could be there at that exact moment,” Brown said.

From everything in the Kroger store Brown could and couldn’t find, she said she didn’t think the delays were by coincidence.

When she saw the man collapse, she was the only one in the parking lot at the time.

Brown handed the phone off to her mother, kept her mask on as she walked up to the man, and started doing CPR.

A crowd began to surround Brown who was attempting to resuscitate the man before an ambulance could arrive.

“I could tell that the CPR was working because when I went up to him he had turned blue, his face was purple,” Brown said. “Right when I started CPR after a few pumps he started to get that color returned to his face so it was pink again.

“He eventually started to kind of cough or sit up a little bit. I was like ‘come on, like you got this, pull through.’”

She’d only practiced CPR on a person once before and it was in a supervised environment with surgical residents and hospital workers coaching her on what she was doing right and wrong.

“It was kind of an out-of-body experience,” Brown said. “I don’t really honestly remember a lot of what was going through my head because I was just so focused on things like ‘I need to keep the pace and I need to focus on all the things that I learned.’”

EMTs arrived and took the man to a hospital where he recovered enough to be transferred to a cardiac rehabilitation facility. The man, Jerry Lawrason, died the first week of July at age 76 after suffering a second cardiac arrest, but had several months added to his life because of Brown’s actions.

“I consider her an angel,” said Dave Lawrason, son of Jerry. “I believe God had her there at that specific moment to do something great.”

Word got around pretty quickly back home in Traverse City.

But those were the friends that knew Brown as a classmate in high school. Her Mom saw her as just her daughter. None saw her as someone who’s going to be a doctor in less than a year.

“I wasn’t surprised, actually, when Meghan recalled what happened and told me her story,” said Maria Rapson, Brown’s best friend throughout high school. “She just jumped right in and did what she’s been trained to do, help save an individual’s life.”

She said Brown was planning on attending medical school since she was a freshman in high school.

“She was just so dedicated,” Rapson said. “I definitely think she’s one of those people that was meant to practice medicine.”

Rapson herself was a kinesiology major at Michigan State University. Brown wants to go into ophthalmology, surgery on the eye.

She says as medical students they often talk about imposter syndrome, a psychological belief where one doubts their own accomplishments and capabilities.

“Can I really do this? Can I really practice medicine? Have I learned enough to be able to save someone’s life?,” Brown said she asks herself.

After this incident, Brown says she’s confident to answer them. She said if she’s found in a situation where someone asks “Is there a doctor in here?” she’d raise her hand and volunteer.

“It’s kind of like an eye-opening moment,” Brown said. “Like wow, all of my hard work, really has paid off and like I can do this and I can help someone who is in need.”

Editor’s Note: This story has been updated to reflect one correction and one clarification. In the original version, Meghan Brown’s name was misspelled. One paragraph was clarified to establish Brown seeks a career as an eye surgeon, which requires the same Personal Protective Equipment as what’s considered normal in the coronavirus pandemic.