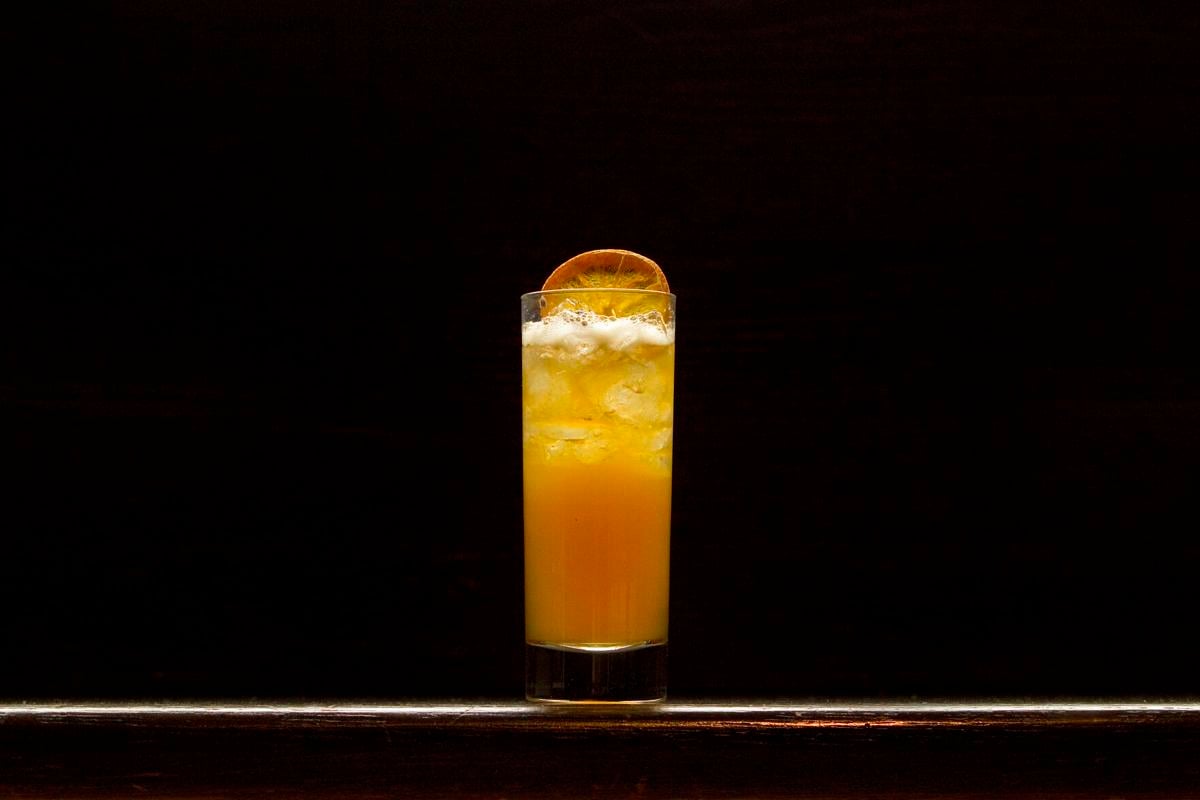 An elevated brunch cocktail at Brasserie Amie is made with gin, St. Germain liqueur, chamomile syrup, mint syrup, lemon juice and a garnish of lavender and orange. 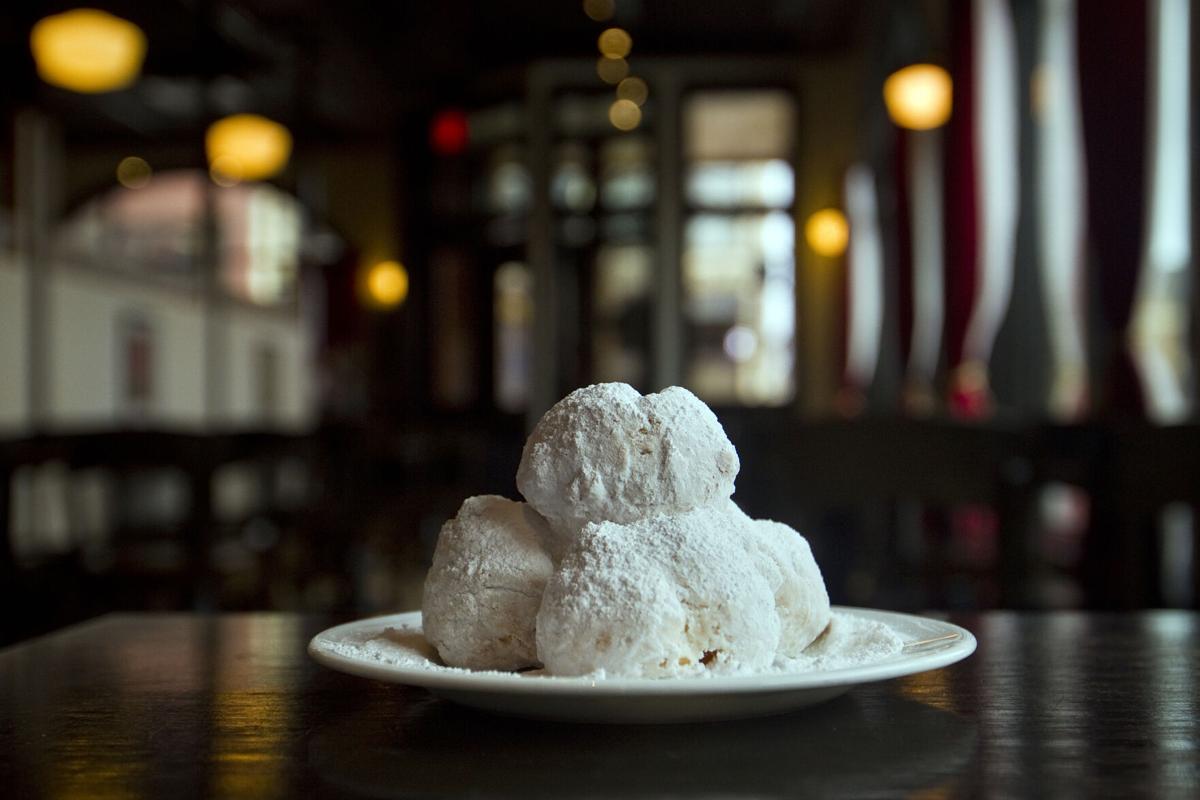 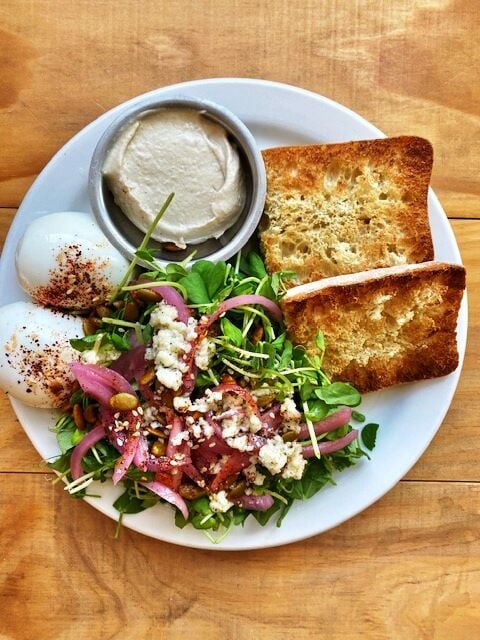 Breakfast Greens at Rose and Fern have Lakeview Hill Farm's shoot salad with pickled red onions and pepita seasoning dressed in toum and olive oil served with 2 jammy eggs and toasted Common Good baguette with a side of tahini. 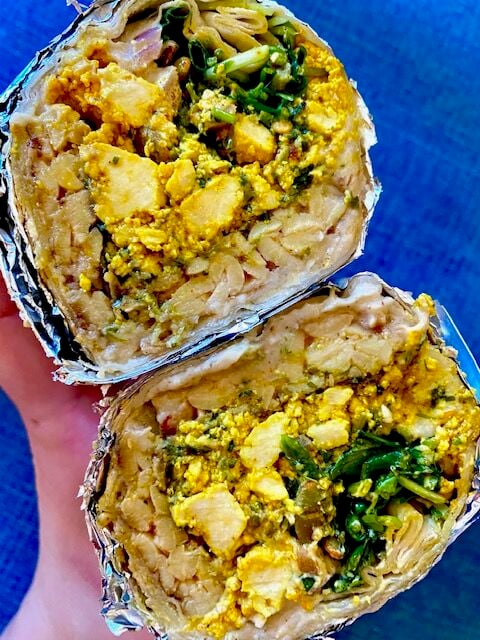 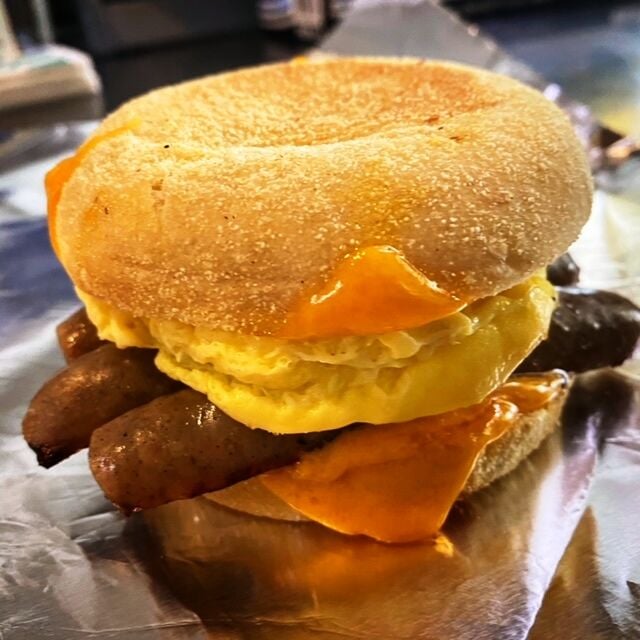 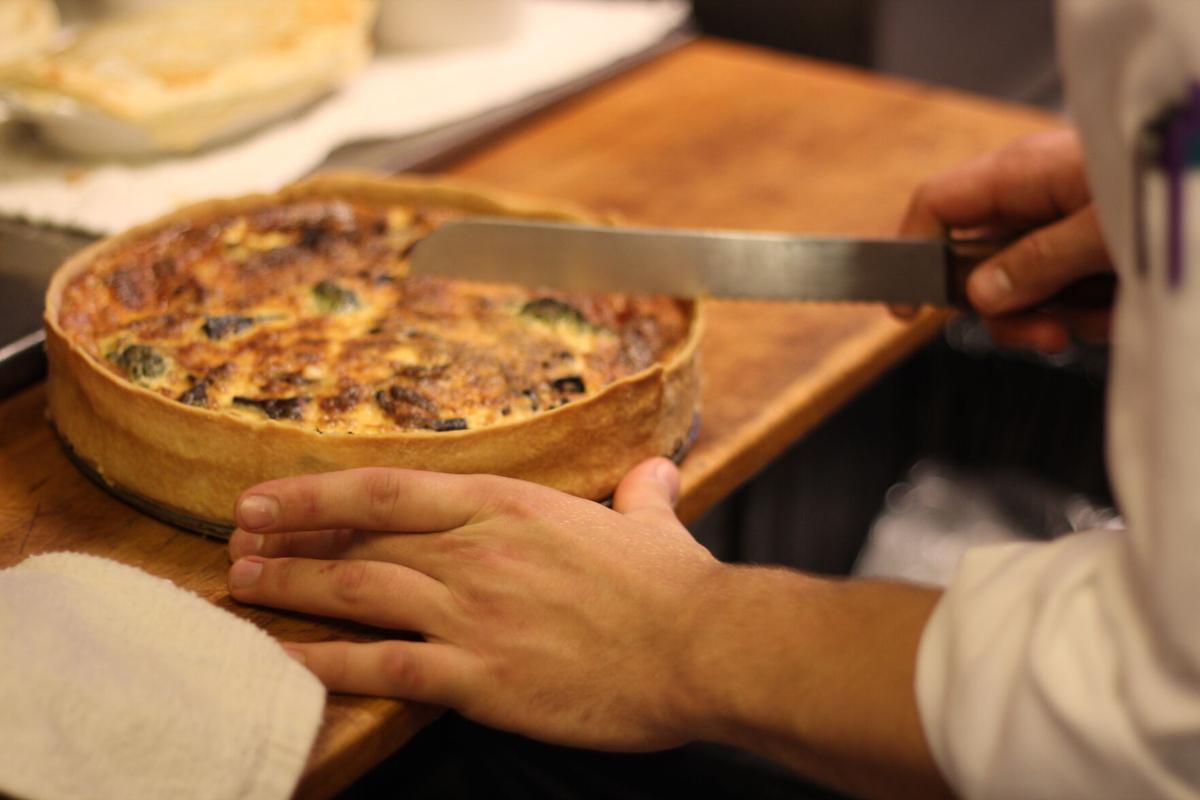 Quiche is a perfect brunch food to serve guests as it can be made ahead of time and is easily dressed up with special ingredients. Pictured is a quiche from Amical. 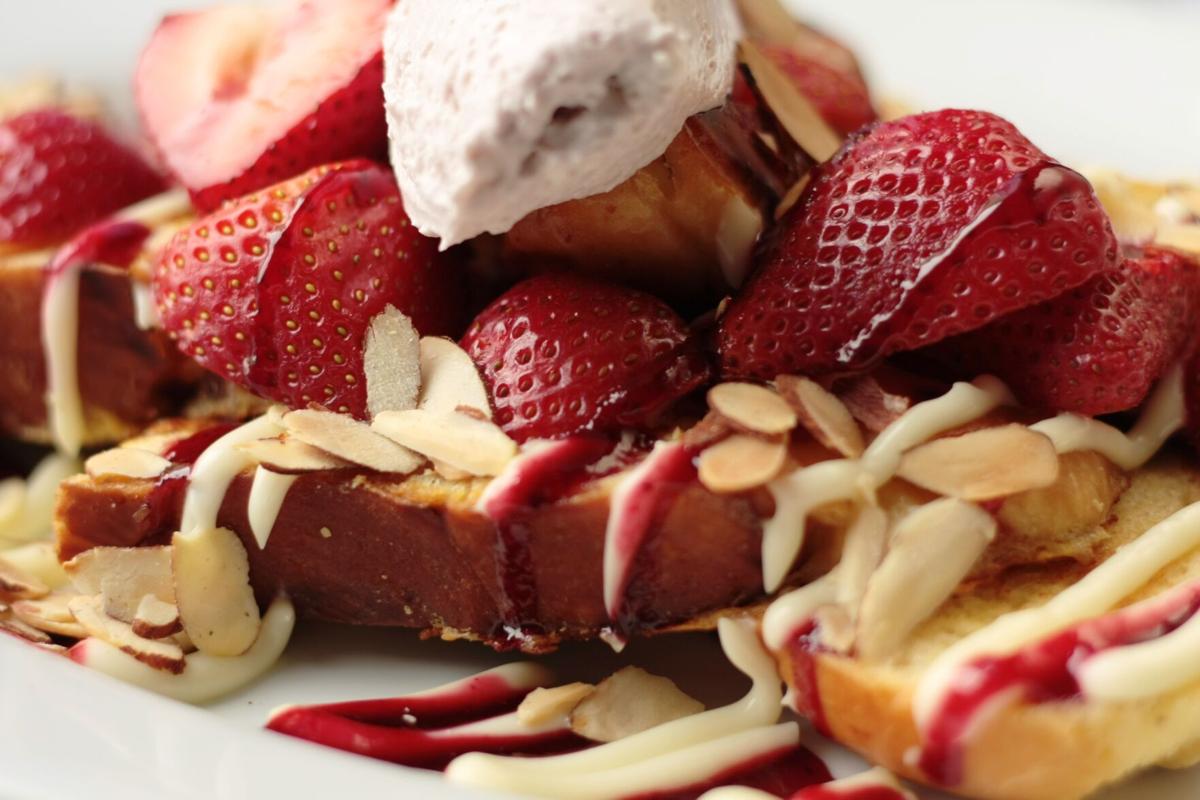 French Toast at Amical made with Bay Bread challah, served with almond Romanoff cream and strawberries. 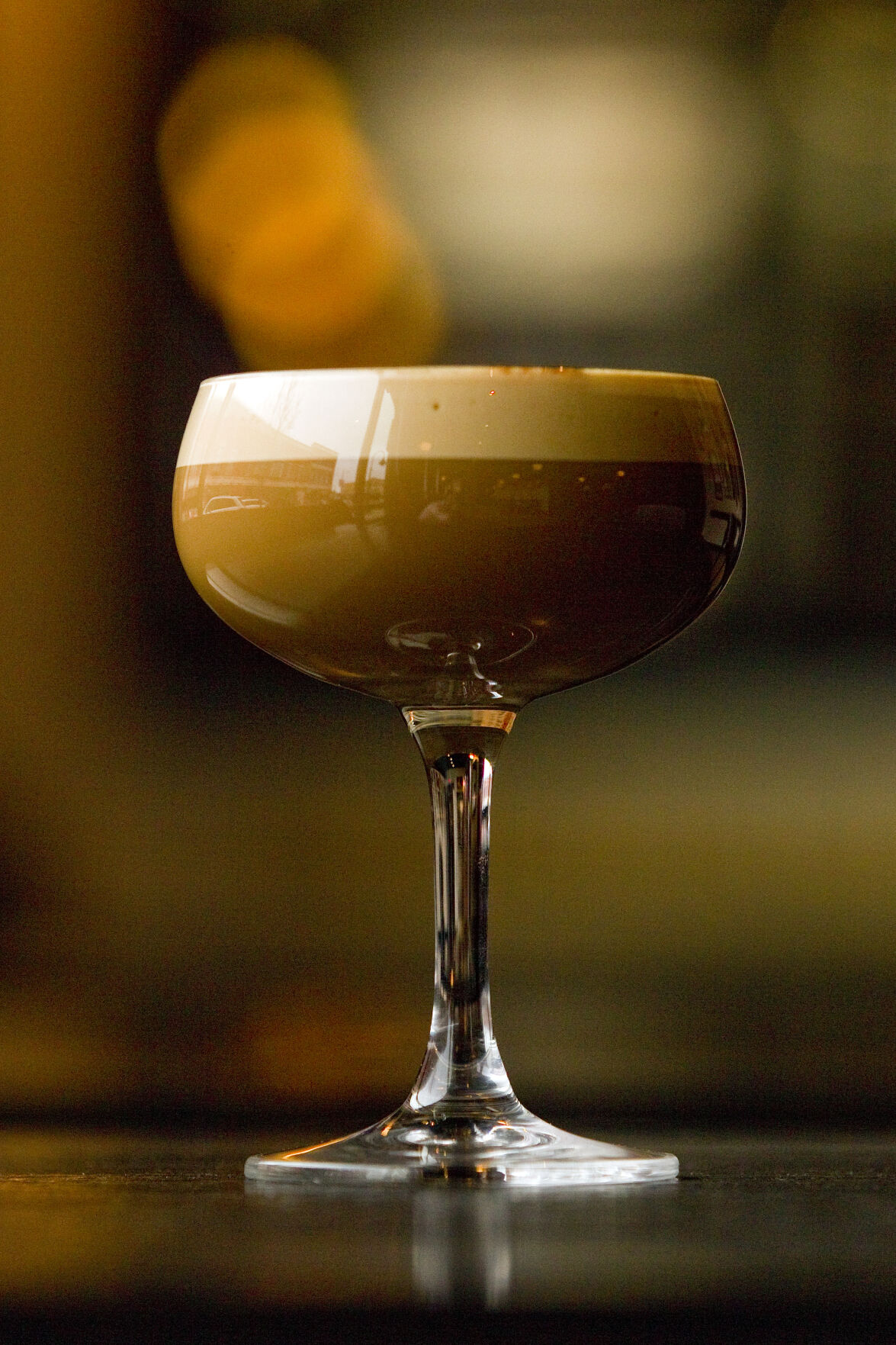 “Un Petit Noir,” made with espresso vodka, a shot of cold espresso, Godiva liqueur, honey and a cocoa and sea salt topping from Brasserie Amie in downtown Traverse City. 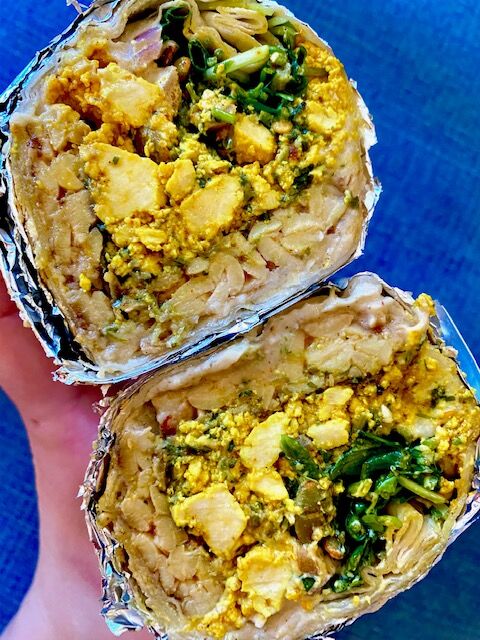 An elevated brunch cocktail at Brasserie Amie is made with gin, St. Germain liqueur, chamomile syrup, mint syrup, lemon juice and a garnish of lavender and orange.

Breakfast Greens at Rose and Fern have Lakeview Hill Farm's shoot salad with pickled red onions and pepita seasoning dressed in toum and olive oil served with 2 jammy eggs and toasted Common Good baguette with a side of tahini.

Quiche is a perfect brunch food to serve guests as it can be made ahead of time and is easily dressed up with special ingredients. Pictured is a quiche from Amical.

French Toast at Amical made with Bay Bread challah, served with almond Romanoff cream and strawberries.

“Un Petit Noir,” made with espresso vodka, a shot of cold espresso, Godiva liqueur, honey and a cocoa and sea salt topping from Brasserie Amie in downtown Traverse City.

While we may agree that the word “brunch” is a combination of the words breakfast and lunch, how we partake of brunch in northern Michigan can be wildly different.

For some, brunch is a special occasion meal, best eaten at a restaurant.

For others, brunch is simply that late morning, early afternoon meal that covers you until dinner.

According to 22-year-old Annie Gerstner: "Brunch is what you eat when you get up.”

According to Mike Curths of Men’s Emporium in Traverse City: “It’s not brunch if there is no booze.”

The word “brunch” first appeared in an article written in the late 1800s in England, and quickly gained popularity in the United States. By 1939, the New York Times declared Sunday a “two-meal day.”

Brunch became enormously popular, with extensive buffets offered at family style establishments to five-star hotel dining rooms. The buffets are mostly gone, but brunch continued to be a busy time of the week for restaurants that offered it before the pandemic.

Rose and Fern Café on Eighth Street in Traverse City serves innovative food that also satisfies the brunch notion of being a substantial meal. Owner Becky Tranchell says that Saturdays and Sundays are the café’s busiest days of the week, checking off another characteristic of brunch. She recognizes the café’s popularity among a hipster group of regulars seeking out a late-morning meal.

Rose and Fern sits on a busy crosstown street, in a residential neighborhood, much like an urban coffee house. Initially, it was a place where customers would hang out and linger over their meals. Dine-in service was halted by the restrictions of the pandemic. During that time, Becky Tranchell expanded her cooking space, and began take out and curbside only service. She offered discounts to food industry workers and to those out of work. Her business began to take off again.

The extra cooking space allowed Tranchell to add more baked goods. Unusual flavor combinations enhance freshly made scones and muffins, and cookie choices included stroopwafle and bonbons on the day I visited. Tranchell trained at Café Fanny, an Alice Waters café in Berkeley, and at Greens, a fine dining vegetarian restaurant in San Francisco, and it shows. Her cooking treats ingredients simply but with care and your taste buds take notice of her soulful seasonings.

Rose and Fern fuels their customers with many healthy and delicious alternatives to traditional brunch foods. That said, there is something for everyone, from the All American, a sausage, egg and cheese sandwich on a house made English muffin to the Happy Hippie, a burrito with tempeh, tofu scramble, tahini, a sumptuous green sauce, and veggies. Most dishes can be eaten “out of hand,” making them an ideal takeaway food.

We talked about the evolving convention of brunch and agreed that this region will continue to support the old and the new based on its demographics. We talked about the café’s future. Tranchell doesn’t think she’ll go back to in-house dining, at least not in their small space.

With dine in, “It’s hard to pay front of the house staff the fair wages they deserve,” she said, and her goal of paying fair wages and serving good, affordable food is better achieved with her takeout model.

This is fine with her customers, as the food they get at Rose and Fern is often taken to a park, beach, or backyard, and enjoyed in the company of friends, fulfilling another important element of brunch — the social aspect.

Chef Andrea Deibler (former co-owner of Raduno in Traverse City) fondly recalled her Chicago days and the brunch culture there. Deibler said, “It was easier to get people together for brunch than dinner” and she most liked the social nature of brunch, “a post- Saturday night, Bloody Marys, gathering with friends.”

However, she found the lifestyle different in northern Michigan, and especially with the pandemic, brunch has become a more intimate affair.

At home, Deibler’s husband Ben likes to make pancakes on Saturday or Sunday mornings, days he is off from work.

“It’s nice to have something sweet,” she said and his cornmeal pancakes are a family tradition. They are often served with fruit Deibler canned in season, along with yogurt and occasionally, breakfast meat. Deibler’s mother treats Andrea to brunch during the week sometimes, making scrambled eggs in a particular way that “she (Andrea) could eat every morning and never get tired of them.”

Deibler and her in-laws also get together for brunch every other month, typically having quiche and fruit salad. We agreed quiche is a perfect brunch food to serve guests as it can be made ahead of time and is easily dressed up with special ingredients. It also lends itself well to inspiration from your refrigerator;a good vehicle for the bits of vegetables, cheeses, or meat you may find there. Deibler knows some people are intimidated making a pastry crust, so an omelet or breakfast casserole is a good alternative.

Brunch at Amical, a restaurant on Front Street, is a Traverse City institution. So much so that owner Dave Denison says getting back to brunch after the pandemic restrictions are lifted “is something he and his staff talk about all the time.”

The restaurant is currently dinner-only, and will likely remain that way through the summer.

Denison is being very mindful about easing into a post pandemic return to normal. He has taken care of his staff and wants to insure a safe transition for staff and customers alike. He hopes Amical can be open 7 nights a week, and 4 days for lunch and Sunday brunch soon.

According to Denison, many Sunday brunch customers were regulars who followed a predictable pattern. Baseball cap-wearing solo diners showed up at 9 a.m., seeking a good meal and quiet place to read the paper. This was followed by families coming in after church, and towards noon, the post-Saturday night party crowd arrived. There was space for those who wanted to linger and for those who wanted to be out in 45 minutes. The atmosphere was decidedly festive.

Brunch was one of their busiest times of the week. The most popular menu item was the French toast made with Bay Bread challah, served with almond Romanoff cream and strawberries. Eggs Benedict of any kind, and Croque Madame, a fancy grilled cheese and ham with an egg on top, were also popular choices. And yes, he found that many people did like to have a drink with their brunch; Bloody Marys and mimosas flowed.

Brunch was normally reserved for weekends because most people were working during the week.

Since many people began working from home during the pandemic, will our new habits translate to yet another evolution for brunch?

My informal poll revealed that many people consider brunch a treat best enjoyed when there is time to relax, and in the company of friends or family. It is too soon to tell what long term effects the pandemic will have on our eating habits, but it seems that brunch is here to stay. Whether we make it at home or indulge in a restaurant meal, it is good we have so many fine choices to consider for brunch in northern Michigan.

Do try this at home:

Melt butter in a pan, then ease in some heavily whipped eggs and a little water. Let eggs begin to set and pull them around a bit. Never overcook them. Plate eggs with a finishing pat of salted butter on top that melts into a delicious puddle. Serve with toast.