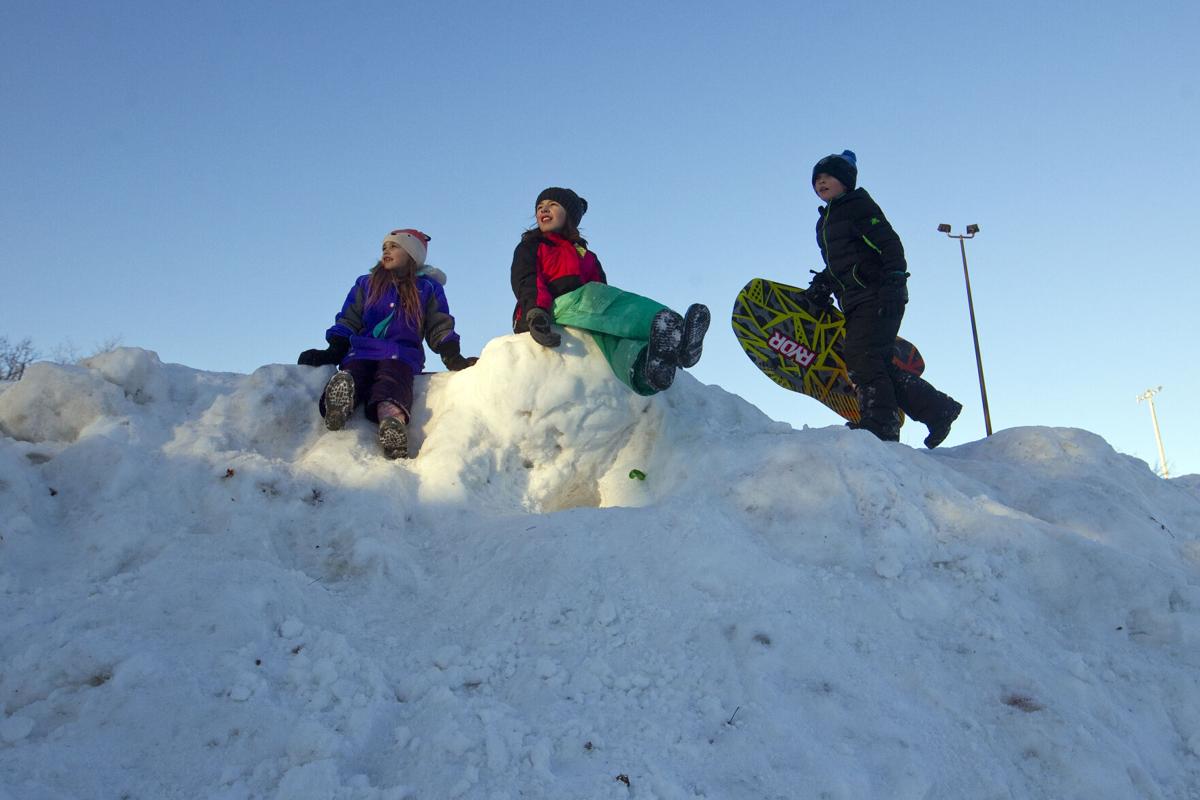 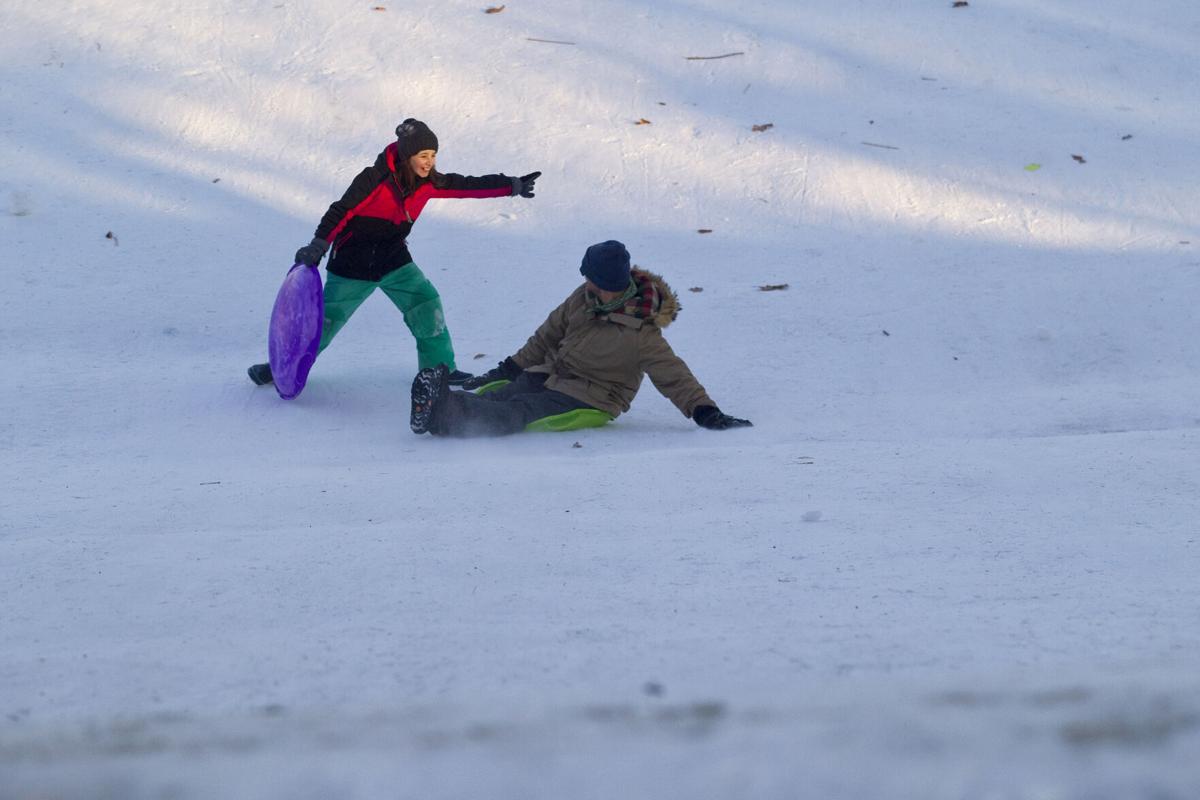 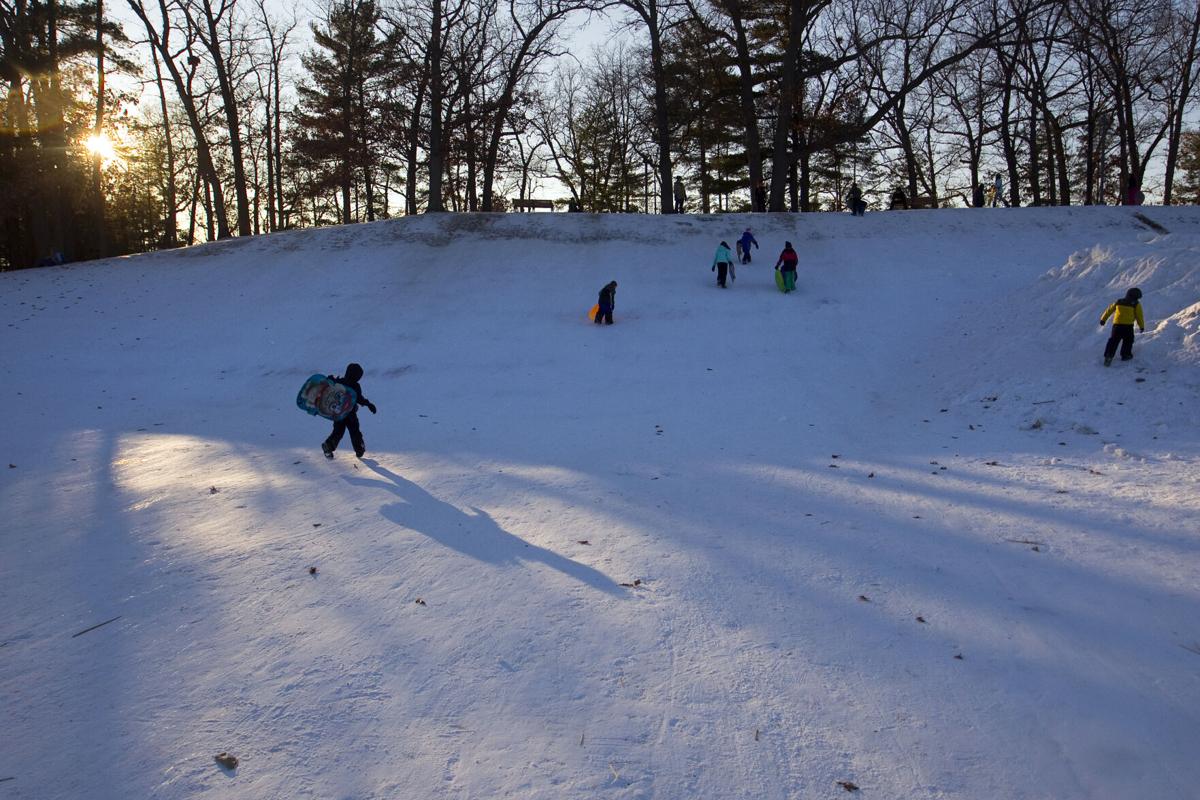 Above, Tess McKolay, 10, tries to high five her father, Shaun McKolay, while sledding at the Grand Traverse County Civic Center in Traverse City. Left, people sled at the Civic Center on a sunny afternoon.

Above, Tess McKolay, 10, tries to high five her father, Shaun McKolay, while sledding at the Grand Traverse County Civic Center in Traverse City. Left, people sled at the Civic Center on a sunny afternoon.

TRAVERSE CITY — A fresh, heavy blanket of snow on the ground always sends Tess McKolay into her parents’ bedroom wide-eyed and with one question: “Is it a snow day?”

McKolay is a student at Eastern Elementary. She, along with her brother and two cousins, took to the the hill at the Grand Traverse County Civic Center on Monday for an afternoon of sledding. The packed-down snow with a thin layer of ice made for some fast rides down the hill followed by slips and falls on the short journey back up.

Although the day off was not because of wintry weather — Traverse City Area Public Schools scheduled a teacher professional development day — the feeling of a school day spent playing in the snow still had that magic for McKolay.

“I’d probably get some cinnamon rolls and then go sledding or cross-country skiing or hang out with my friends,” she said. “It just feels nice and happy.”

With the shift to virtual learning because of the COVID-19 pandemic, there were questions early in the school year if snow days would go the way of the Dodo. That doesn’t seem to be the case in northern Michigan, an area that typically sees more than 40 inches of snow by this time of the year.

Superintendents from school districts serving the five-county region gathered virtually a few weeks ago to discuss how snow days should be handled and if they are needed. The state still forgives up to six days of canceled classes without having to extend the school calendar, but that policy was pushed over the limit last year when inclement weather led to a bevy of snow days in Michigan schools.

Bill DiSessa, spokesman for the Michigan Department of Education, told the Associated Press in October that the state’s guidance on snow days will remain the same for students attending classes in-person. Disessa said, however, that the department does not expect requests for snow days for online classes. There also remains the question if requests for forgiveness of snow days during online classes would be approved by the state.

The prospect of avoiding the headache of a waiver request seemed attractive to some educators, but shifting to virtual at a moment’s notice would come with its own migraine.

Northport Public Schools Superintendent Neil Wetherbee said if there is a push for virtual learning on snow days, the decision to call a snow day likely would be made based on forecasts instead of actual conditions. That leaves districts vulnerable to “bright, blue-skied snow days where we could have been in school,” he said.

Northport still will conduct virtual school on snow days if the day already was scheduled to be virtual. However, shifting to an unplanned virtual day requires “all hands on deck,” Wetherbee said, adding that students do not take their devices home every day and that most teachers’ in-person lessons plans do not translate to virtual learning.

“Trying to squeeze in a day of virtual learning is really only doing lip service to the teaching and learning. It undervalues the effort teachers put into their lessons,” Wetherbee said.

TCAPS Superintendent John VanWagoner said his district is keeping the snow day policy the same, even if school was already slated to be online.

VanWagoner said about 15-20 percent of TCAPS students and staff have to travel to get internet access. Many more who have access do not always have reliable connections, and heavy snow could more negatively affect that.

Safety is the issue at heart, VanWagoner said.

“A lot of kids are going to their grandparents’ houses or the library and different places for that, and we don’t want those people on the roads,” VanWagoner said. “Any day that the roads are too slick to have people on, we will be calling a snow day.”

VanWagoner has mixed feelings about snow days, but he knows the “dog days of winter” after the holidays wears people down.

“That’s a long stretch,” he said. “But with as much learning loss as we’ve already had, I want to have school every day that it’s possible.”

Parents see the value of a guilt-free and unexpected day off.

Scott Welch, father of twin 4-year-old boys in the TCAPS Great Start Readiness Program, said older students sometimes need a day to catch up on homework or sleep to “just get their mind right.”

“It’s a nice break, a nice mixup, a nice reprieve,” he said. “Kids are really pushing it in school, and school is harder, right now. That mental break, having a day to reset is important.”

The sense of wonder for kids on a snow day is what helps them hit that reset button, Wetherbee said. A snow day is “one of the highlights of kids’ winter.”

“We all grow up so fast. Giving up a day or two so a kid can be a kid isn’t much of a sacrifice,” he said. “It’s pretty magical.”