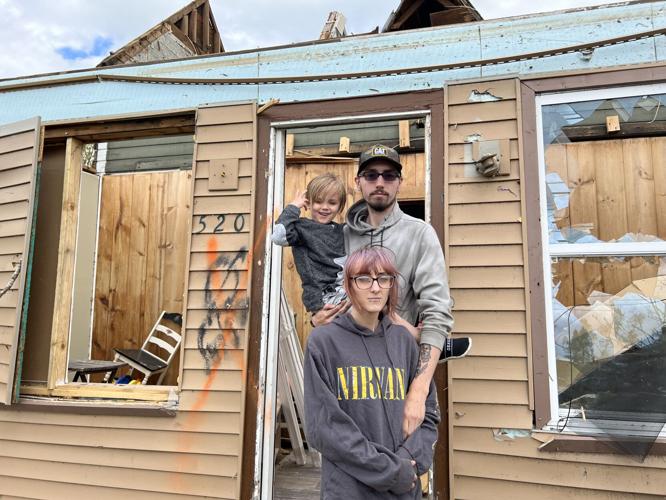 Kaylee Schoolcraft, Brandon Schuett and their child Leo return to their damaged home June 3 in southern Gaylord after the May 20 tornado. 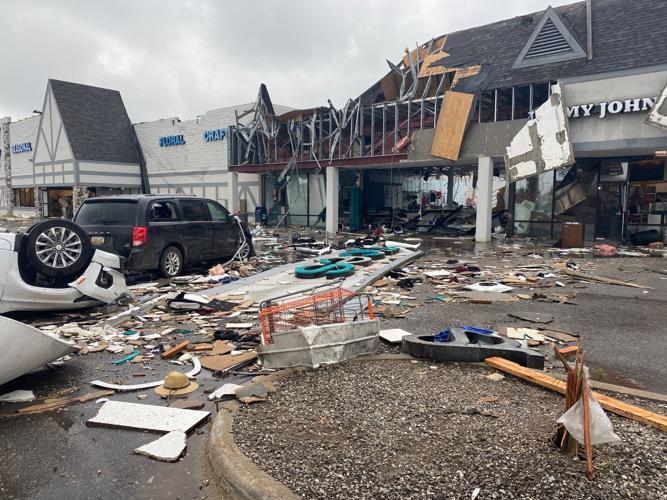 The scene in front of Maurice’s in Gaylord after a tornado touched down last month.

Kaylee Schoolcraft, Brandon Schuett and their child Leo return to their damaged home June 3 in southern Gaylord after the May 20 tornado.

The scene in front of Maurice’s in Gaylord after a tornado touched down last month.

GAYLORD — The sky was pitch black as Kaylee Schoolcraft and her husband Brandon Schuett heard the emergency alert screaming from their car’s Bluetooth speakers.

In less than eight minutes an EF-3 tornado would pass through their home on the south side of Gaylord.

Schuett sped down the street and swung into the driveway of the duplex he and Schoolcraft share with his uncle. Their 3-year-old son, Leo, sat in the back seat, still processing what was going on.

With about five minutes left, Schoolcraft took Leo to the other side of the duplex while Schuett retrieved their three dogs.

“I came back over and I could see the tornado above the Dollar General across the street,” Schuett said. “I started screaming at my wife to ‘get out, we need to get to the basement now.’”

With seconds to spare, every person and dog crammed into the small, dark cellar on Schuett’s uncle’s side of the duplex.

“Within 20 seconds the tornado hit and we felt the vibration. You could feel the suction … you could just feel the pressure kind of like when your ears pop,” Schuett said.

It only took about a minute for the tornado to destroy the duplex.

As the family emerged from the cellar, 3-year-old Leo held his mom tight.

The family is grateful for their lives but the damage to their home and possessions was immeasurable.

Furniture and appliances were destroyed along with unique items like Schuett’s horror memorabilia collection. But the worst loss of all was a memory shelf for the couple’s baby they lost at birth last year.

“I lost a lot of his items besides his urn — that’s the only thing that we were able to find,” Schoolcraft said. “We lost everything else.”

Both were left wondering what they could have saved with just a few more minutes and how they could’ve been notified earlier. Both wondered if tornado sirens would’ve given the warning they needed.

Like an Amber Alert, the CodeRed system sends out a message characterized by a sharp ringing noise that appears on all phones within a given area.

Other northern Michigan counties such as Grand Traverse, Montmorency, and Presque Isle rely on similar systems. Others, like Alpena and Alcona, have kept their sirens.

Deming said CodeRed can send the most information to a large number of people — unlike tornado sirens which can often be too quiet or too far away to alert people indoors.

“I don’t think you could miss getting a (CodeRed) alert. Even if you had headphones on, it’s going to blow your ears out,” Deming said.

At one point, Otsego County had a siren system outside the fire department, but it was not a designated tornado siren. That unit was also decommissioned about 15 years ago.

For years, the CodeRed system has been the go-to alert system for the county office.

“We are in an electronic world and everyone has their electronics around them,” Deming said.

However, the system does have its flaws. It requires residents to manually sign up online. Deming said about 8,000 people in Otsego are signed up — less than a third of the county’s total population.

But even without the CodeRed system, residents were still alerted electronically thanks to the the National Weather Service and the Wireless Electronic Alert (WEA) system which launched in 2012 and is managed by the Federal Communications Commission.

It’s been used more than 70,000 times to warn the public about dangerous weather, missing children, and other critical situations.

National Weather Service meteorologist Dan Cornish worked the warning desk May 20 and was the one who sent out the alert to Gaylord residents.

Before making the call, he noticed large shifts in wind’s direction and velocity.

“That’s a sign that you’re starting to get rotation,” Cornish said. “To us warning operators, that’s definitely a signal that there could be a tornado that’s imminent.”

Unlike CodeRed, residents do not need to sign up to use WEA. Wireless companies like Verizon or AT&T volunteer to participate, creating a public-private partnership.

But according to Sabrina Jauernic, another meteorologist at the Gaylord station, this system also has pitfalls.

“If people want to be sure that they get the WEA alerts on their smartphone, they need to have phones that are newer than 2012 and that they’re actually getting service from a nearby cell tower,” she said.

Then there are other ‘what if’ scenarios with electronic communication. What if someone doesn’t own a phone? What if they’re isolated or unconscious?

There is no perfect way to alert people of emergencies, Jauernic said. There may always be that group of people who don’t get the message in time.

In this case, Jauernic said it’s up to people to look out for each other and make sure their neighbors have a warning far enough in advance to protect themselves or their belongings.

“The younger generation can go to their grandparents and say, ‘hey, look what I got on my phone, we might need to do something about this. Vice versa — those who are watching live TV and radio have to pick up whatever phone they do have and get in contact with their loved ones,” Jauernic said. “We really have to rely on each other.”

Deming said the CodeRed and WEA systems saved lives. Not only would tornado sirens have suffered their own flaws but he said installing a new system is unfeasible for the county. He estimates tornado sirens to cost between $30,000 and $60,000 per unit.

“Some things are out of our control, but we try to keep things in our control. It’s so tragic, we lost two lives out of this, and we have injured people yet, but it could have been much worse.”

His team has two upcoming sessions to assess the county’s action plan, including the effectiveness of the CodeRed system.

A friend of Brandon Schuett and Kaylee Schoolcraft set up a GoFundMe page in hopes to raise money for a new home. They’re currently staying with Schuett’s grandparents.

Your donation to match our Report for America grant helps keep him writing stories like this one; please consider making a tax-deductible gift of any amount today at https://www.interlochenpublicradio.org/